With 2019 over, Twitter has released some statistics about gaming discussions on their platform. It’s been a busy year for gaming and esports, and Twitter trends certainly demonstrate that. Last year there were over 1.2 billion Tweets that pertained to gaming, which is a whopping 20% increase since 2018. As such a successful year to end the decade, its interesting to see which games, teams, tournaments and personalities were in the spotlight!

Most Talked About Games 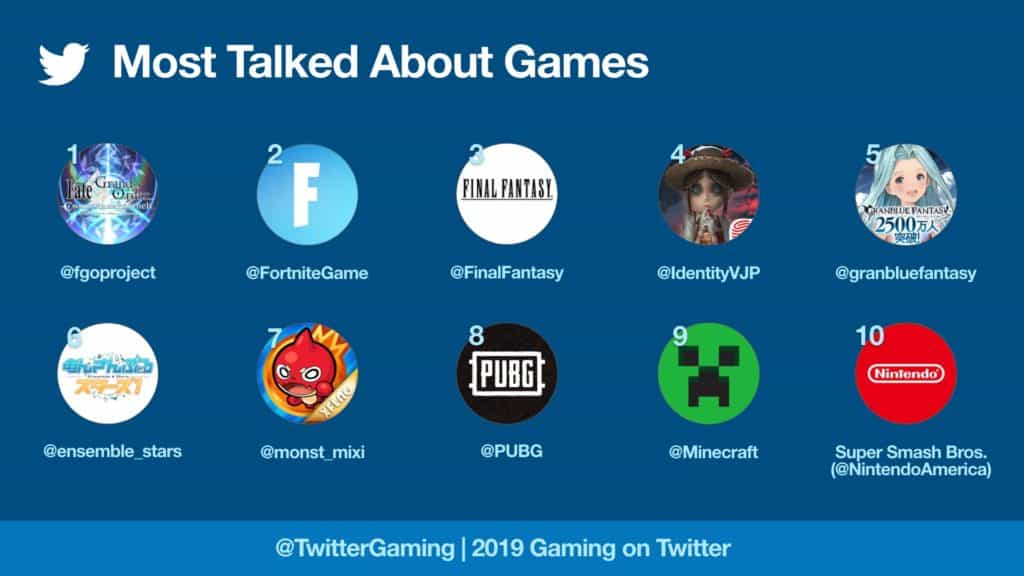 To start with, the first category is rather general, video games. This list may take some by surprise though. Fate Grand Order takes the #1 spot, and the list is filled with other Japanese games. The popularity of Japanese RPGs and mobile games is not to be underestimated, and they clearly dominated Twitter gaming discussions for 2019. Though a large chunk of their player base is domestic, they have a large international appeal. This is most true for Fate and Final Fantasy.

Despite it’s massive rise to popularity, Fortnite was pushed down to #2. But this is nothing to scoff at. With a massive casual player base along with a flourishing esports scene, it’s doing quite well for itself. Meanwhile, Players Unknown Battlegrounds and the long-lived Minecraft are still going strong, with Super Smash Bros. continuing to be a community-favorite.

Additionally, specific to Canada, here were the five most mentioned games:

Most Talked About Esports Teams 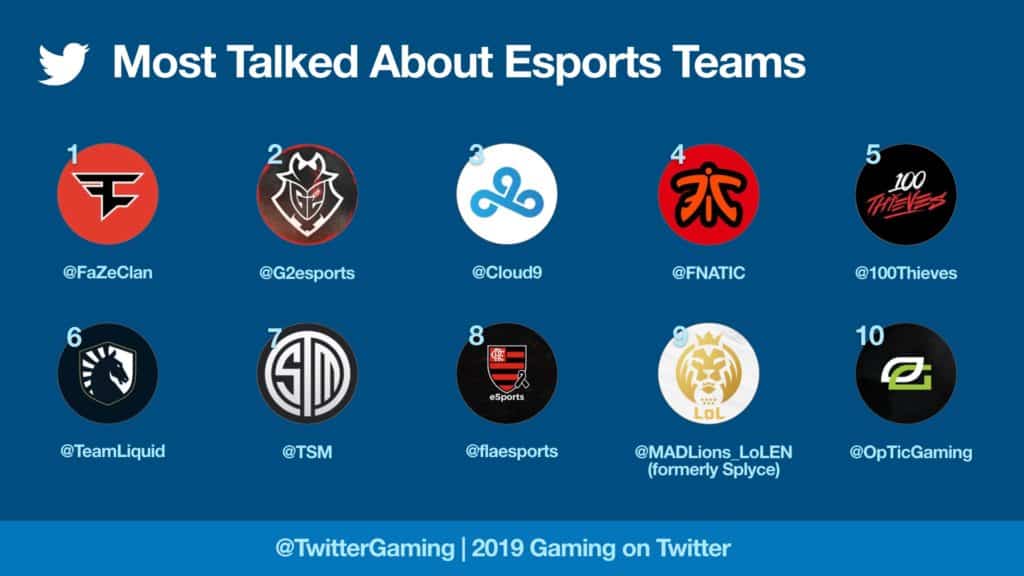 Next up regards esports teams. The 10 listed above were the ones most talked about throughout all of 2019 and isn’t too surprising. FaZe Clan has teams in all of the big shooter games and is an iconic name in these types of games. With Fortnite being insanely popular and Call of Duty: Modern Warfare attracting new viewers, FaZe Clan’s popularity is no joke.

In the next few spots are teams with rather famous Twitter interactions. G2 Esports, who’s League of Legends team was dominant all year, led the charge. Closely behind them are Cloud9 and Fnatic, who’s Twitter pages are known for witty interactions with the community and with each other.

The rest in the top 10 are other stable brands and MAD Lions, who rebranded from Splyce, which drew some attention.

Countries with Most Gaming Tweets 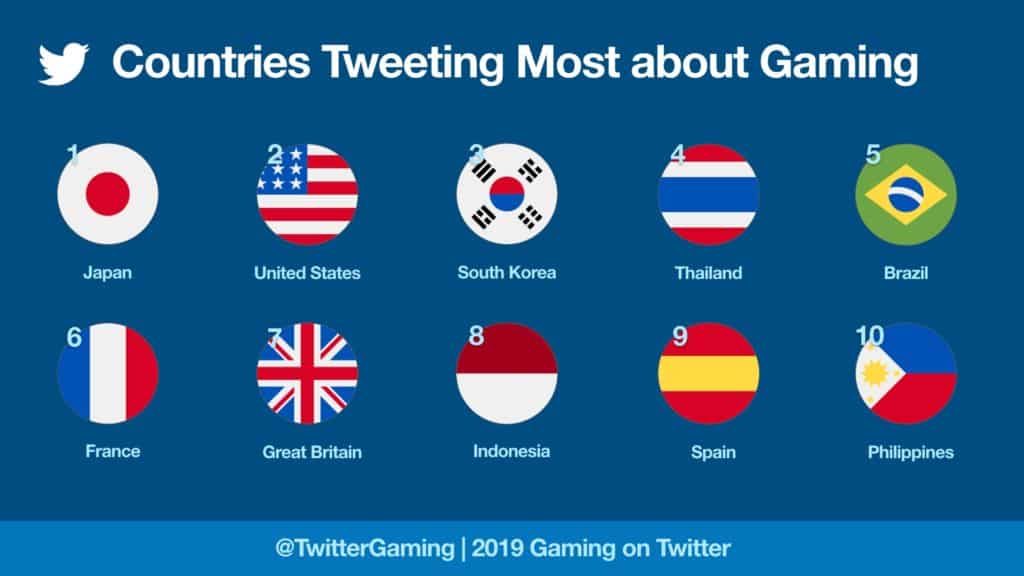 Based on the Most Talked About Games, it’s no surprise to see that Japan leads the ranks in terms of amount of gaming Tweets. Their domestic gaming market is saturated with tons of games, and with the ridiculous popularity of Fate Grand Order and Final Fantasy, Japan certainly has enough to Tweet about.

Second is the United States, which also has a huge entertainment market. The U.S. is the hub of many games and esports, so this is natural.

Otherwise, there are some expected results mixed in with some less expected ones. There are more small Asian countries than some might have expected to see, but does help to put in perspective the huge Asian market for gaming.

Most Talked About Gaming Events 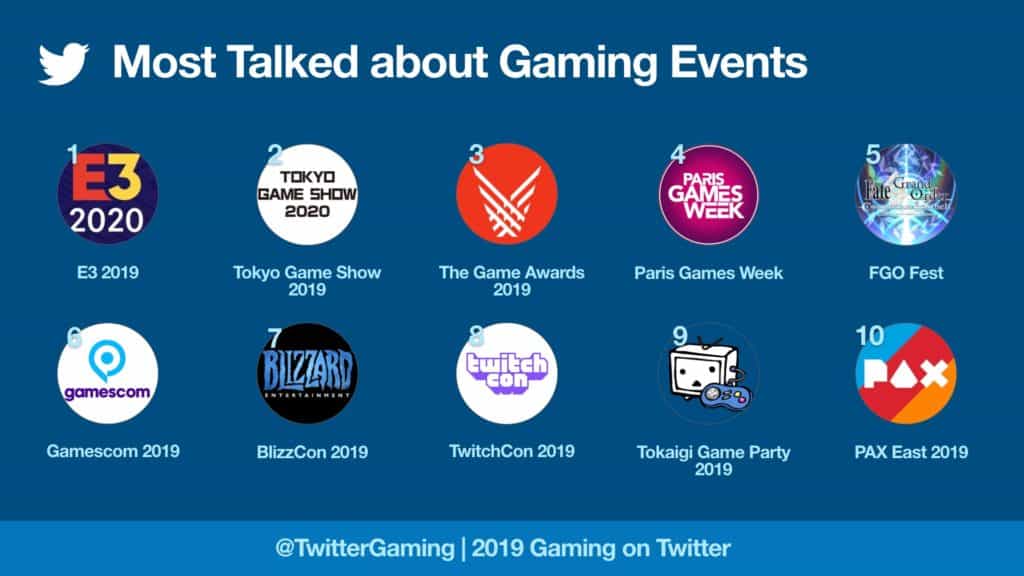 The biggest gaming events are interesting to see as well. E3, as the premier gaming event in the world, takes its rightful spot at #1. Right behind it is the Tokyo Game Show. Its another testament to the flourishing Japanese gaming market, along with things like FGO Fest and the Tokaigi Game Party.

Other notable events are the Game Awards, which celebrate the best video games of the year, and the Paris Games Week. BlizzCon, TwitchCon and Pax East, all recognizable events, so they rightfully take their place on the list too.

Most Talked About Esports Events 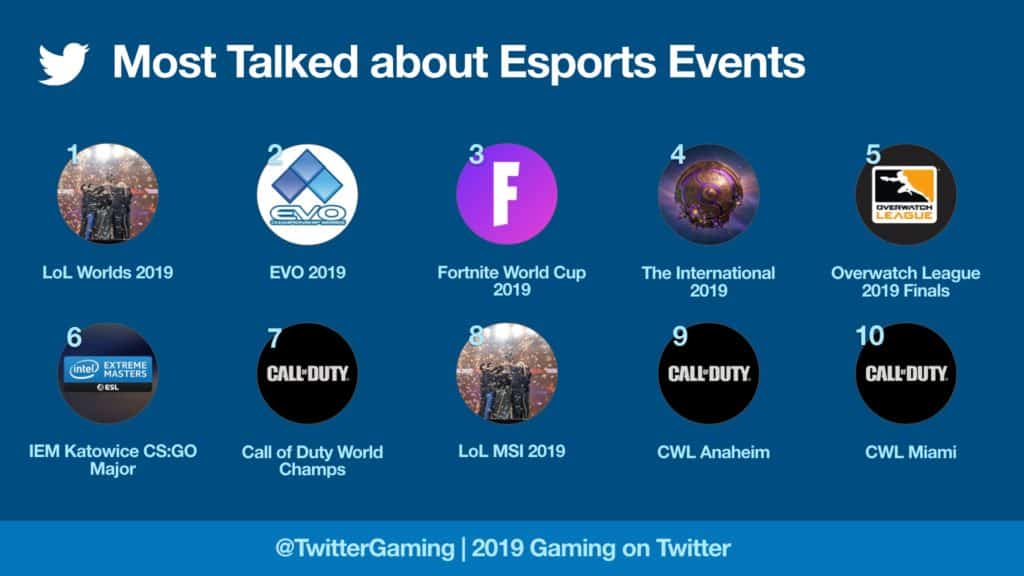 Now we come to the esports events, where pretty much all of the major esports games are represented. The League of Legends World Championship claimed first, which is rather expected because of the esports’ incredible global popularity. Right behind it is the biggest fighting game tournament of the year, EVO, and the Fortnite World Cup at third.

In the middle of the pack are the Dota 2 International and Overwatch League Finals. Due to their prestige, the list wouldn’t be complete without them. The IEM Katowice CS:GO Major boasts more popularity than any other CS:GO tournament, while LoL MSI and a number of Call of Duty esports events bring up the rear. With the Call of Duty League beginning in 2020, it’ll be intriguing to see if Call of Duty esports grows even more.

Most Talked About Gaming Personalities 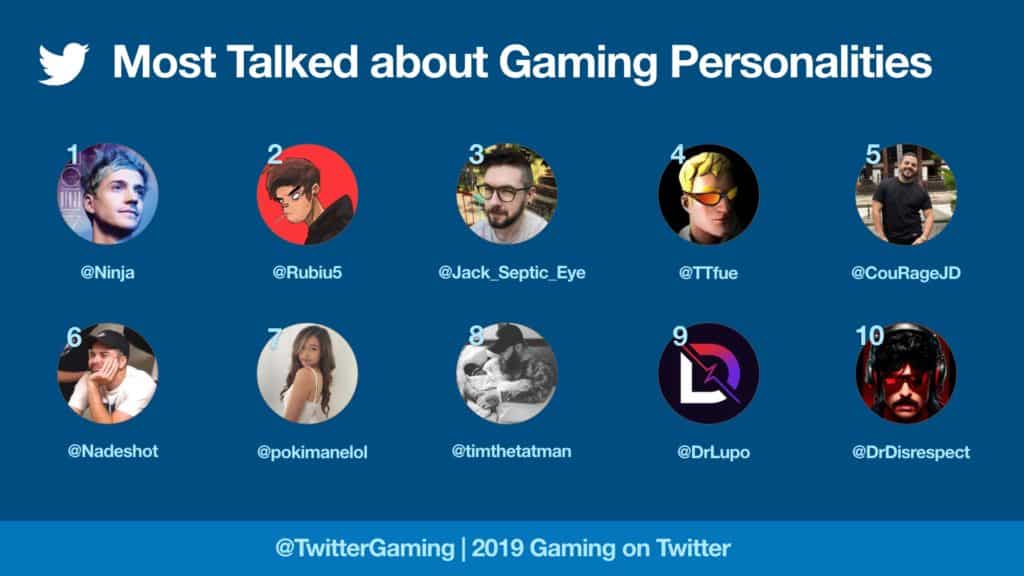 Lastly are the people that promote video games and help make them great. At first place is Ninja, who has become one of the biggest faces of Fortnite. He’s been extremely successful the past few years and his move to Mixer only gave people more reason to talk about him.

At second and third are two popular YouTubers. Ribius Z and JackSepticEye have are long-time gaming YouTubers who continue to be quite popular themselves.

After them, six streamers and a 100 Thieves owner make up the rest of the list. They all have a different variety of games, but they are all without a doubt exceptionally entertaining individuals. Anyone who watches live streaming is bound to know their names.