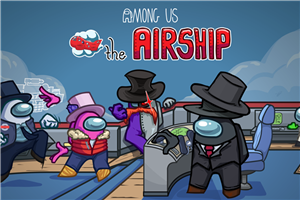 InnerSloth has released the much-anticipated Airship map. The Airship is the fourth and biggest map in Among Us, allowing players to pick the room they start in.  Adding the Airship map with new tasks and options to the game was teased earlier this month.

Welcome aboard! Play the new, free Among Us update featuring:
⭐️ New tasks, hats, and areas to explore
⭐️ Accounts for reporting
⭐️ Our biggest map yet

Work together and carry out the greatest plan – whether that’s as a Crewmate or Impostor. pic.twitter.com/2GmQIxzQSd

In addition, the Airship skin bundle is now available for all players. With the release of this map, InnerSloth has also revealed further plans for the game. From a new code of conduct to full revamps to larger lobby size plans, the future of Among Us looks good.

The next steps for Among Us

The new Airship map update also comes with a new code of conduct and account system for players on all platforms. The accounts system, for now, is focused on reporting and moderations. However, there are future plans to add a friend system and allow players to transfer their cosmetics between devices. Also, players can now report if someone in the game acts inappropriately. The consequence of inappropriate acts includes both temporary and permanent bans. Plans are also being made for the linking of accounts and players must create accounts to access free chat.

Moreover, the new update includes an age restriction to create an account and usernames are not exclusive to one player. To change your display name, you must have an account. Without an account, players can still play the game via guest mode with a randomly generated name. Other measures of keeping the game safe are still in the works.

In addition to all these new plans, InnerSloth is promising more frequent and transparent updates to players. This will include showing their development process and a lot more on behind the scenes work.