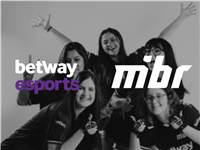 The deal will see MIBR Female and Betway collaborate on a range of activations.

The partnership comes after Betway and MIBR announced they had renewed their existing deal for a fourth consecutive year. According to the release, this is the first female esports partnership that the bookmaker has secured.

Adam Savinson, Head of Esports at Betway, spoke on the expansion in a release: “Building on our existing four-year partnership with IGC’s MIBR team, we are very happy to be able to bring in more of their talented roster into the Betway family.”

MIBR signed its female CS:GO roster back in January, with the team managing to win the first split of the 2021 Grrrls League, winning over $6,000 (£4,353) in prize money. Betway is the third partner of the team, joining online tournament platform Gamers Club and Brazilian branch of multinational electronics company LG.

Betway’s list of esports partners includes the likes of PSG Esports, BIG Clan, and LGD Gaming, among others.

Yuri ‘Fly’ Uchiyama, Director at MIBR, also commented on the deal: “The women’s Counter-Strike scene is growing more and more and we are very proud to be able to extend this partnership with Betway to support the promotion of this community.”

Esports Insider says: Thanks to various initiatives, female esports players are starting to get the recognition they deserve with multiple organisations acquiring rosters across a range of titles. As the first female esports partnership for Betway, this deal could be the catalyst for partnerships of a similar nature to emerge in the future.