Black in Magic: The Gathering got another sacrificial weapon today in the Theros: Beyond Death spoilers with Discordant Piper.

Expanding upon existing sacrificial themes within Theros: Beyond Death (THB), Discordant Piper provides fuel for several cards that have already been revealed. It might not see play in Constructed but it’s worth picking in Limited if you’re building around zombies and Woe Strider. 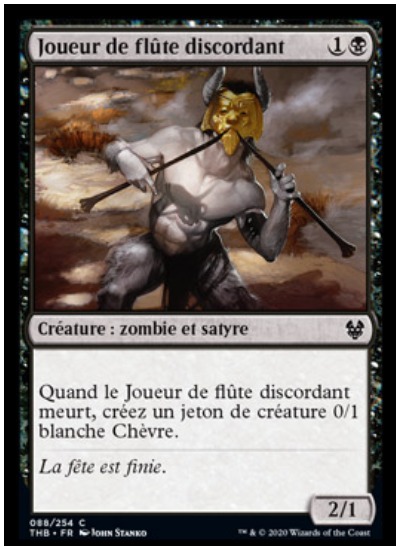 Discordant Piper wasn’t revealed in English but here’s a rough translation of the card’s text.

Curving into Woe Strider, Discordant Piper produces goat fodder when it dies in the form of a 0/1 token. It’s also a zombie, fueling the lifegain and Scry effect within the third chapter of Tymaret Calls the Dead.