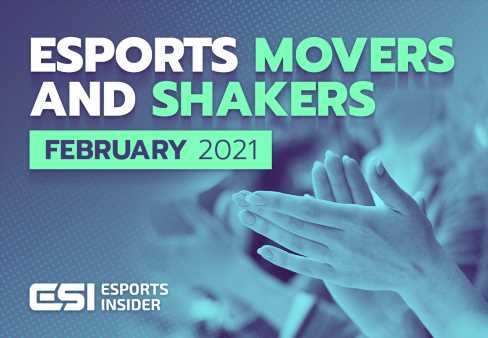 Each month, Esports Insider curates a list of the industry’s key personnel changes. Here we have compiled February’s most notable movers and shakers. To read more about a story, click the corresponding link in the title.

Professional gamers are more than just athletes, and through esports are developing careers beyond playing.

EVOS Esports has entrusted former player Stefan ‘EVOS.Soul’ Chong with the role of liaison between the organisation and brands, government agencies, and other stakeholders.

Rosander is an experienced executive whose former roles include CEO of Dunder Casino, CPO of Mr Green, and Business Intelligence Director at game developer EA.

The appointment also sees St. Martin become a spokesperson and representative for the organisation to ‘help shape the reach, reputation and narrative’ of the organisation.

London-based esports organisation Fnatic has announced the appointment of Patrick Foster as its first Chief Financial Officer to help drive the organisation through its next phase of growth.

Also joining Fnatic’s ranks is Georgina Workman as the organisation’s new Head of Production, to support all creative aspects of the business.

Vindex has announced the hire of Iraisa Jones as its new Director of Human Resources. Jones will be responsible for building a ‘robust talent-focused function that drives employee and business success’.

Prior to joining Vindex, Jones was the Regional Human Resources Director at the American Cancer Society.

United Kingdom-based esports organisation LDN UTD has announced that Andrew Bloch has joined its advisory board.

Bloch joins an advisory board which already includes Sree Varma, CEO of iSportconnect, and Charlotte Webster, CEO of Chrome Management.

In his new role, Bajaj will oversee corporate development alongside working with the rest of the team to seek expansion opportunities for FaZe.

Esports betting platform Luckbox has appointed Nevzat Ucar, formerly of Riot Games and Red Bull, as its Head of Content.

According to the press release, Ucar is expected to play a leading role in Luckbox’s marketing strategy, whilst also being responsible for the company’s global content strategy.

Gaming-arena developer Belong, a subsidiary of Vindex, has announced multiple new hires as the company continues to expand its management team.

The two other appointments see Rich-Ray hired as Belong’s Vice President of Human Resources, while Rossi will be company’s Chief Financial Officer.

TQ Jefferson, formerly the Vice President at Disney’s Games & Interactive Experiences group, has helped companies leverage IP in gaming, including that of TV show ‘The Walking Dead’ as well as cross-media IP like the Marvel Universe and Pixar.

Pany Haritatos of Snapchat is a long-time game entrepreneur, formerly of game publisher Kongregate that was subsequently sold to Modern Times Group (MTG).

Jen MacLean leads the worldwide business development for small- to mid-sized game studios at Amazon Web Services, helping them to ‘leverage the power of cloud technologies to build great game experiences and scalable live operations’, according to the release.

Bernhard Mogk is an esports-industry veteran. At ESL he has been responsible for group-wide B2B revenue, building and overseeing all commercial units, and much more.