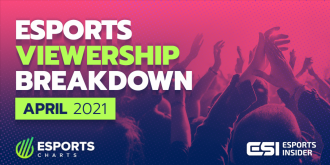 Every month, ESI, in collaboration with Esports Charts, delves into the world of esports viewership to highlight what audiences are currently watching, along with other emerging trends in the industry.

April’s viewership was largely dominated by two esports: the ever-present Mobile Legends: Bang Bang, and League of Legends, with the mobile game once again coming out on top. 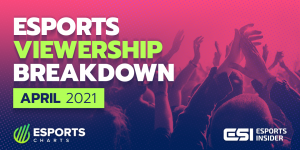 The Moonton title has yet again recorded the highest peak concurrent viewership of the month with 1.47m people turning in at one time to see Rex Regum Qeon vs EVOS Legends during the MPL ID Season 7. This is the third time in 2021 that Mobile Legends has topped the peak-viewership chart and MPL ID Season 7’s second victory.

Mobile Legends Professional League’s Indonesian regional competition has already gone on to beat this figure in May, making it extremely likely that the event will be featured in next month’s edition. 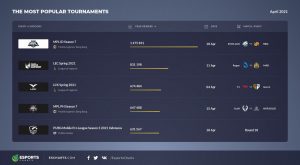 With a staggering 321,084 average viewers, MPL ID Season 7 continued to highlight the growth of the mobile esports title globally. It’s also important to mention that the title has achieved this month’s top spot despite not being in the top five english-language esports broadcasts in terms of peak viewership.

Following the conclusion of League of Legends’s major domestic competitions, the LEC has risen from fourth place in March to second place in the peak-viewership table.

Despite not having the competition’s two high-profile teams in Fnatic and G2 Esports, the LEC Spring 2021 final between MAD Lions and Rogue still recorded a peak viewership of 831,198. This is in fact an increase in peak viewership from LEC Spring 2020’s figure of 817,397, which featured both G2 and Fnatic.

Moreover, the European League of Legends competition recorded a significant average viewership increase. The event garnered 309,955 average viewers, which is over 70,000 more than the same tournament last year. 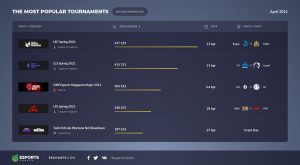 It wasn’t just the LEC that saw year-on-year viewership growth, with Riot Games’s second-tier European competition, European Masters, also showing huge development. Following the rise of the LFL, the French regional league, and a growing interest in League of Legends in Europe, EU Masters almost doubled its Summer Split average viewership of 47,795 by recording 88,949 for its Spring edition.

This was in large part to french organisation Karmine Corp, who competed in the top four highest-viewed matches in this year’s tournament.

In addition, League of Legends’s premier North American competition, the LCS, had mixed viewership statistics this year. LCS Spring 2021 recorded a peak figure of 415,731 which is in fact up from last year’s 387,299 figure. Despite this increase, average viewership was down from Spring 2020 with a figure of 176,012 recorded compared to 2020’s 183,010.

Nevertheless, the LCS did see some success in April with regards to its popularity on Twitch. According to Esports Charts, LCS’s official channel recorded the second-highest peak viewership for an esports competition. 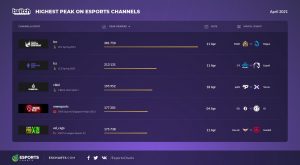 April’s number five spot went to yet another mobile title with the PUBG MOBILE Pro League Season 3 2021 Indonesia, garnering a respectful peak viewership of 631,567. This is the second time the competition has made it into the top five after claiming the same position in March.

Overall the competition held an average viewership of 231,961, with the peak viewership figure recorded during the event’s grand final. Over the past few months PUBG Mobile has remained consistent in the viewership charts due to the Indonesian competition and the Global Championships, which took place in January.

However, it is unlikely that PUBG MOBILE will be featured next month with the competition’s most-viewed event in May so far being the PUBG Mobile Star Challenge Arabia 2021, which garnered a peak viewership of 111,303.

What to look out for in May?

Probably the biggest rival to MPL ID Season 7’s viewership figure is League of Legends’s MSI 2021. As of this writing, the competition has yet to beat MPL ID’s grand-final peak viewership of 1.83m. However, with the event set to commence its semi-finals, there is a chance for League of Legends to top the chart.

Other competitions to keep an eye on include the Six Invitational 2021 (Rainbow Six: Siege), Flashpoint Season 3 (CS:GO), and the VCT Stage 2 Masters in Reykjavík (VALORANT). Moreover, with the continuation of MPL PH Season 7, May’s viewership figures are already looking very exciting.