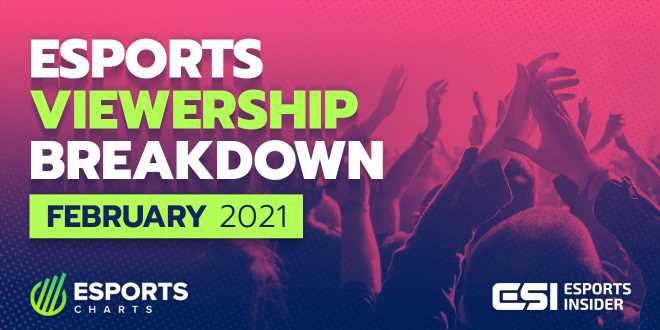 Every month, ESI, in collaboration with Esports Charts, will delve into the world of esports viewership to highlight what audiences are currently watching, along with other emerging trends in the industry.

February’s viewership figures are mostly dominated by League of Legends and CS:GO, however Mobile Legends: Bang Bang continues to top the global charts.

MPL ID Season 7 kicks off with a bang

As a result, the competition has recorded the highest peak viewership for the month, whilst also being the only mobile esport to make it into the top five. The tournament’s popularity has even continued to rise into March. As of this writing, the competition’s peak viewership has risen to 701,810 which means this likely won’t be the last time we see the MPL ID in this monthly roundup.

The figures continue to represent the global popularity of Mobile Legends: Bang Bang as an esport, with the title featured in the last two monthly viewership charts despite not featuring in the top five for English-speaking peak viewership.

Despite IEM Katowice 2021 claiming second place in terms of February’s peak viewership — recording over 596,000 during NAVI vs Team Liquid — the competition is significantly down from its viewership last year. This year’s competition, which was held online, garnered an average viewership of 224,126, which is over 50,000 less than in 2020. Moreover, this is the first IEM Katowice since 2018 to not hit one million peak viewers.

One reason for this decrease could be due to the pandemic hampering the opportunity to host an offline event, particularly when tournaments such as the League of Legends World Championship and the M2 World Championship took place physically. However, BLAST Premier’s 2020 Global Final in January, which was also held online, recorded a greater peak viewership (687,691) and average viewership (317,017) than IEM Katowice 2021.

Another factor could have been the event’s revised format, with IEM Katowice featuring a play-ins stage which increased the competition’s airtime by an estimated 38 percent, according to Esports Charts. As a result, the event did record the second-most hours watched for an IEM Katowice event, clocking in at around 19.85 million hours. Even so, IEM’s figures are unfortunately underwhelming despite placing second in terms of peak viewership.

League of Legends in Europe and Korea blossoms

Placing third and fifth in peak viewership for February is the LEC and LCK, Riot Games’s European and South Korean leagues respectively. Whilst it is difficult to compare the competition’s growth to its previous editions, mainly due to the fact that both leagues are ongoing, there are certainly signs of viewership increases.

The 2021 LEC Spring Split’s average concurrent viewership since starting is 285,906, which is significantly higher than 229,711 for Spring 2020. This is even more impressive considering the league’s playoffs have yet to commence; this figure will almost certainly rise. LCK 2021 Spring Split’s average viewership is lower than its previous year, 222,123 compared to 233,661, but again, playoffs have yet to begin.


More specifically looking into last month, the LEC’s most viewed match for February, in terms of peak viewership, was G2 vs Fnatic with 582,469. Meanwhile, LCK’s clash between T1 and NS RedForce recorded more than 525,000 peak concurrent viewers.

Riot Games’s North American competition, the LCS Lock-In, was also the most popular tournament amongst English-speaking viewers in February, with the competition’s final between Cloud 9 and Team Liquid garnering a peak viewership of 370,801.

Following on from BLAST Premier’s successful Grand Finals 2020, the BLAST Premier Spring 2021 had a lot of momentum. This is highlighted by the event recording the fourth-highest peak viewership in February with 543,836.

Among Russian-speaking viewers, BLAST Premier Spring 2021 placed second in peak viewership for the month with 155,064 people watching NAVI vs FaZe Clan. The most viewed event in the category was IEM Katowice. Yet again the most viewed match featured NAVI but this time versus Team Liquid, recording a peak viewership of 185,796. According to Esports Charts, NAVI was the most popular CS:GO esports organisation in 2020. In total, the team recorded an estimated 61 million hours watched by viewers.

In March, the majority of League of Legends’s regional competitions are set to either conclude or be deep into playoffs, so it’s likely we will see some of the names mentioned above featured in March’s peak viewership list. This also includes the MPL ID Season 7 which, as mentioned prior, has already broken its February viewership figure. Will the mobile title be able to maintain its hold on the top spot as other competitions enter their latter stages?