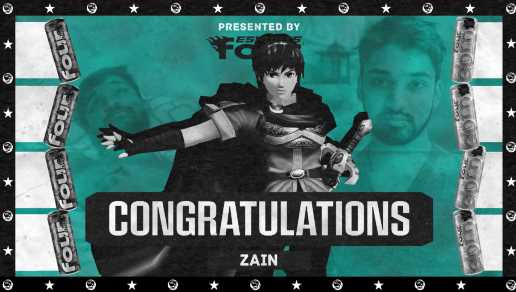 Zain has frequently proven himself to be the best Melee player in North America since the beginning of the coronavirus pandemic. However, prior to this event, he had yet to win a tournament from the losers bracket.

His first loss of the online era was to Joseph “Mang0” Marquez during the first week of the Slippi Champions League, a single-elimination bracket with no chance for a runback. Then, at the LACS 3, S2J forced him to the losers bracket after a 3-2 win in winners quarters. Zain later ran into his bracket demon, Jeffrey “Axe” Williamson, and lost 3-1 for a fifth place finish.

Zain got to try his hand at the losers bracket again at Four Loko Fight Night. He faced S2J in winners semis, suffering a devastating 3-0 loss as he struggled to string together extended punishes and failed to use his signature edge cancels to aid in platform movement and extend combos.

Zain looked similarly lost at the beginning of his set against Justin “Wizzrobe” Hallett in losers quarters. However, following a self-destruct from Wizzrobe in game two, Zain began to return to his regular form. From there, he won 14 straight games, dominating Wizzrobe, Kurtis “moky” Pratt, Kyle “Kalamazhu” Zhu and S2J. S2J interrupted Zain’s flawless run to win a single game in the second set of grand finals. Zain retaliated with a near-four stock in the next game to win the tournament.

For now, Zain maintains his title as the best player in North America. Of course, this tournament could have been tougher for him; his usual worst nightmare, Axe, played his secondary Young Link rather than Pikachu. In addition, Mang0 was sick and opted to play his secondary Captain Falcon during most of top 16, giving Zain one less player to worry about in top eight.

S2J is becoming one of Zain’s biggest problems

Considering the fact that Zain destroyed S2J in grand finals at Four Loko Fight Night, S2J—being one of Zain’s biggest counters—is a testament to how dominant Zain is overall. Still, S2J’s win over Zain in winners semis was significant for a plethora of reasons.

That set marked Zain’s fourth loss of the online era (excluding sets where he played his secondary Roy). As a result, S2J became the first person to beat Zain more than once since the beginning of the pandemic. In addition, he is the only person to beat Zain 3-0 in that timeframe.

Alongside his Zain win, S2J also employed his devastating punish game to win sets over Jake “Jmook” Arvonio and Kalamazhu, both of whom put up some of their best performances to date at this event. That being said, S2J benefited even more so than Zain from Mang0’s early exit from the bracket. Though they have faced each other at major tournaments for more than 10 years, S2J has never beaten Mang0.

To be fair, Kalamazhu’s excellence against Fox, in particular, isn’t exactly news. His best performance of 2020, LACS 3, included wins against top Foxes like Cody “iBDW” Schwab and Steven “FatGoku” Callopy. Even so, Kalamazhu cemented his prowess against the space animals with his third place finish at Four Loko Fight Night.

Despite Peach’s difficulties approaching the much faster Fox, Kalamazhu made each of his neutral openings count with huge punishes. This punish game led him to a 3-1 victory against FatGoku and a 3-2 victory against moky.

In addition, Kalamazhu took a game off of Mang0’s Falco after trailing for the majority of the game. Mang0 made one mistake, firing one laggy standing laser, which gave Kalamazhu the opportunity to combo and edgeguard him. From there, Mang0 switched to Captain Falcon, which Kalamazhu also handily defeated.

Jmook is on the rise, and he’s rising fast

In top 64, Jmook’s precise tech chases, and risky but effective edgeguards with Sheik, led him to dominant victories over Edgard “n0ne” Sheleby and Avery “Ginger” Wilson, both considered to be top 10 players in North America.

Jmook struggled to secure these same tech chases against S2J in winners quarters. However, he seemed to find his footing once again in the losers bracket of Four Loko Fight Night, defeating Ginger 3-2 and Dawud “Aklo” Rahman 3-0. In doing so, Jmook became the first Sheik player to beat Aklo besides Aklo’s own brother, Danyal “Foxy Grandpa” Rahman.

Predicting Jmook’s trajectory going forward is difficult simply because he’s reached his current position so quickly. Jmook was already well-known within New York’s Melee scene, but he rarely traveled out of region to compete. As a result, online tournaments have given him the chance to prove himself on a national scale for the first time.