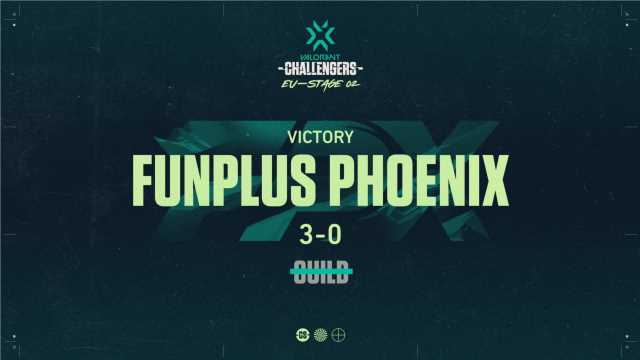 FunPlus Phoenix finally have a major tournament win, as they have beaten Guild Esports at the European VALORANT Champions Tour Stage 2 Challengers 1 tournament. FPX swept Guild 3-0 in the Stage 2 Challengers 1 event today, April 9. Both teams are now through to the Challengers Finals and will compete against Turkish and CIS teams for a chance at Masters 2 in Iceland. The two grand finalists will receive a week break, as Challengers 2 qualification starts tomorrow, April 10.

Fascinating performance by our team on all maps today! #FPXWin pic.twitter.com/BJkDfrGkuu

FPX dominated the series on Ascent, Icebox and Split. The team did not let Guild take control of either map at anytime, as FPX maintained a round lead in each game. The entire team put together great performances but Pontus “Zyppaan” Eek had a great series in particular.

The Swedish player finished with 69 kills across all three maps and had an Average Combat Score of 353. On Icebox, he recorded 33 kills and 523 ACS with Reyna.

“Finally, winning a final and performing really well. But this final didn’t really matter that much but it feels good,” Zyppaan said.

This is FPX’s first VCT and major tournament win, as the team failed to take the First Strike or Masters 1 title. The team did not get a chance to take a Challengers title in Stage 1, as the format was not a tournament; just a qualification bracket.

How FPX brought Guild down at Stage 2 Challengers 1

FPX came into the series with a few curveballs. The team had some different agent picks that seemed to throw Guild off and force certain fights. Kyrylo “ANGE1” Karasov, FPX’s in-game leader, went with Reyna on Ascent to start the series. He was an aggressive force on their defensive side and sped up the usually slow and methodical FPX play. They took the map in quick fashion, 13-9.

On Icebox, Zyppaan took on the Reyna as ANGE1 went back to his usual Viper for the map. Zyppaan ended the game with his insane score line and showed what he can do on the agent.

“I just wanted to show who is the best Reyna player in the game right now,” Zyppaan said.

FPX took the map 13-5 and then went into the final map, Split. This would end up as Guild’s worst round difference as FPX took it 13-5. Zyppaan topped the scoreboard again as FPX changed its agent lineup for the map. ANGE1 took up Reyna again as Tobias “ShadoW” Flodström took up the smoker role on Omen. FPX pulled out three different compositions on three different maps in the Challengers 1 Grand Finals and did not look at all unpracticed or lacking in ability.

The two teams will face off against the best of the European, Turkey and CIS regions at the Stage 2 Challengers Finals, starting on April 23.  The rest of Europe will have one more chance to qualify at Challengers 2 starting tomorrow, April 10.