Esports tournament organiser Freaks 4U Gaming has expanded its partnership with German IT firm Shikenso Analytics to include the organiser’s new esports ecosystems in 2022.

As a result, Shikenso will apply its AI analytics to the Northern League of Legends Championship (NLC), the VALORANT Champions Tour (VCT), as well as German and French VALORANT regional leagues. 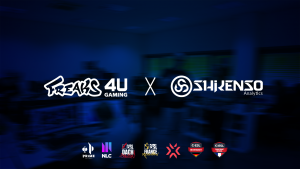 Previously, the collaboration between Freaks 4U Gaming and Shikenso only applied to the Prime League, the DACH region’s League of Legends European Regional League. The ESL German and French national championships will also have the data platform’s analytics due to the extension.

Marco Niemann, VP Commercial at Freaks 4U Gaming, commented: “As a leading esports agency and operator, Freaks 4U Gaming attributes our success to best-in-class services and solutions. Our performance is validated by reliable, data-driven analysis by Shikenso Analytics, their transparency and expertise have proven to be valuable as we expand our global footprint.

“Shikenso has been a trusted partner since 2020, we are excited to leverage their AI analytics in other leagues and tournaments within our  product portfolio which differentiates and adds to the Freaks value proposition.”

According to the release, Shikenso’s analytics include image recognition, object tracking and data mapping to measure the media values generated through partnerships. As such, the platform will provide insights into all of Freaks 4U Gaming’s sponsorship activities and activations across its operated leagues.

As well as securing partnerships with the likes of Riot Games, Diversity in Esports (DivE) and ESL in 2021, Freaks 4U Gaming also announced a €15m (£12.7m) investment from Co-Investor Partners. As a result, Co-Investor Partners became a minority shareholder of the company.

Some of Shikenso’s partners signed in 2021 included OG Esports, mousesports, BLAST and PGL.

Arwin Fallah Shirazi, CEO of Shikenso, added: “The cooperation is an exceptional example of how a joint goal can redefine the analytics standard within the industry. Together, Freaks 4U and we will push the limits of German esports and achieve a new level of professionalisation second to none. As the first German startup of its kind, we are grateful to be working alongside an industry giant like Freaks 4U Gaming.”

Esports Insider says: Freaks 4U Gaming’s extension should provide the company with greater analytical opportunities and insights when it comes to analysing its sponsors across multiple league’s. Considering the deal was originally centred around just one of Freaks 4U Gaming’s ecosystem, the renewal highlights the company’s faith in Shikenso going forward.