As a result, both entities will launch Røkkr Regiment, a Call of Duty-centred programme designed to support and engage military members and veterans. 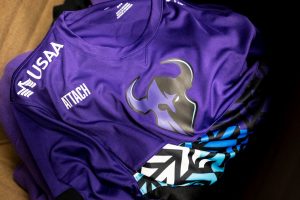 According to the release, the programme will look to provide ‘exclusive offerings and unique experiences’. Details over what these activations will entail have not been revealed.

Brett Diamond, Version1’s Chief Operating Officer, commented: “With Røkkr Regiment, our goal is to create a military appreciation programme that has the capability to reach all service members and veterans who want to be a part of the Røkkr community. We are thrilled to work with USAA on this initiative.”

USAA’s logo will appear on Minnesota Røkkr’s in-game and physical team kits that will be worn during Call of Duty League matches. Moreover, USAA has been named as the team’s official insurance and military appreciation partner.

The announcement also revealed that Minnesota Røkkr will host a USAA-sponsored Call of Duty: Warzone event for military service members. USAA-sponsored content and in-broadcast segments during the team’s match-day programming, alongside an array of digital content, will also be created.

Harvey Chang, USAA’s Lead Marketing Manager, added: “USAA is expanding its presence within the Call of Duty League by working with teams like Minnesota Røkkr to co-create military-first programming like Røkkr Regiment.

“We’re hoping to show our appreciation for our military service members and veterans who game in a small way through these new experiences and events.”

Earlier this month, USAA unveiled a partnership with fellow Call of Duty League tea, the New York Subliners (NYSL). Moreover, the company has also secured deals with the likes of Envy Gaming and Dexerto.

The partnership will officially kick off during the Call of Duty League Minnesota Røkkr Home Series, which commences on July 15th. USAA has been announced as the presenting partner of the event.

Esports Insider says: Following on from its partnership with the Waconia Brewing Company, Røkkr has managed to secure another reputable partner ahead of its upcoming series. It’ll be interesting to see what plans are in place for Røkkr Regiment and whether the programme will increase the team’s reputation, whilst also providing benefits to military members.