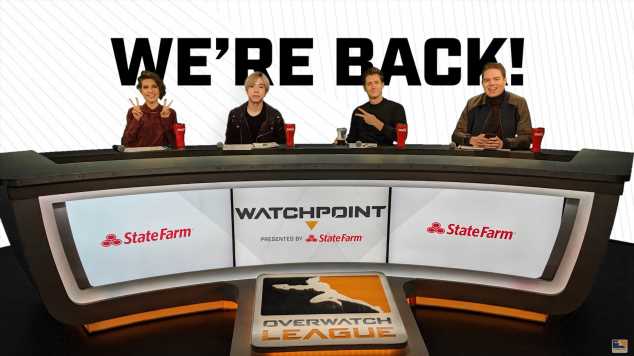 Out of these four individuals, three were part of the desk in the 2020 season. Soe continues her role as an analyst and host. And, fan favorite, Reinforce, does the same. Former player and Dennis Hawelka award winner, Custa, also returns as an analyst. However, a former translator and host have returned after some time away. Danny Lim, who was a translator for the first two Overwatch League seasons, is now part of the 2021 desk team.

This desk team is balanced in both game knowledge and charisma. Reinforce and Custa have significant experience playing competitively, which helps them explain complex concepts easily. Reinforce, himself, was a main tank player for Rogue and for Team Sweden years ago. Custa was a captain for the Los Angeles Valiant before retiring and moving on to his current role.

On the other side, Soe has been a crucial part of the community since her role in interviewing for the inaugural season. She showed her skills as a host in the 2018 Overwatch World Cup and hasn’t looked back since. Starting in 2019, Soe joined the desk team as an analyst and host. She even spoke up recently on women’s roles in esports at a Toronto Defiant panel. However, Danny Lim joining is a nice surprise. Also part of the inaugural season team, Danny was a translator and interviewer for the Korean players and teams. In the Blizzard Arena, his quick thinking and charisma helped him become instantly loved by the fans.

Danny became a freelance host at the start of 2020 and wasn’t part of the last Overwatch League season. But, this year he’s back as a new voice for the desk team.

To tune in and see this new desk in action, watch the Overwatch League start on April 16.