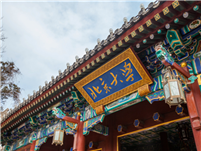 China’s top educational institution, Peking University, announced that it has launched a three-month-long training class from Jan. 16 –  April 11, targeting people who want to become management talents in the esports industry. The class is aimed at developing top esports industrial talents.

Wenyi He, secretary of the Peking University National Sports Industry Research Foundation emphasized that the class does not teach people how to play games, but includes lessons for strategy, philosophy, management, sports, technology, and cultural industries. In addition, esports experts from esports organizations and companies would be also invited to the class as teachers, while 60% of teachers are from Peking University, according to He.

“Our country (China) emphasizes to develop the digital economy, which includes a core character digital cultural industry. Esports is one of the important contents for the digital cultural industry,” He explained why the university launch the program in an interview of People’s Daily. “From sports, culture, and technology perspectives, we want to understand the core value of esports.”

The tuition fee for the class is ￥68K RMB ($10.5K USD). Peking University is considered one of the two best universities in China, as well as one of the leading academic institutions in the world. It has ranked the top 23 on the 2021 QS World University Ranking List.