Not long after Aphelios’ reveal, Riot Games has officially announced the next upcoming League of Legends champion, Sett. It seems as though they enjoy making fans teary-eyed and emotional with his official lore. Sett comes from a deeply personal background and it seems that he may be the next melee champion. This future release comes two months after Riot announced the champion roadmap, hinting at Sett from the beginning. 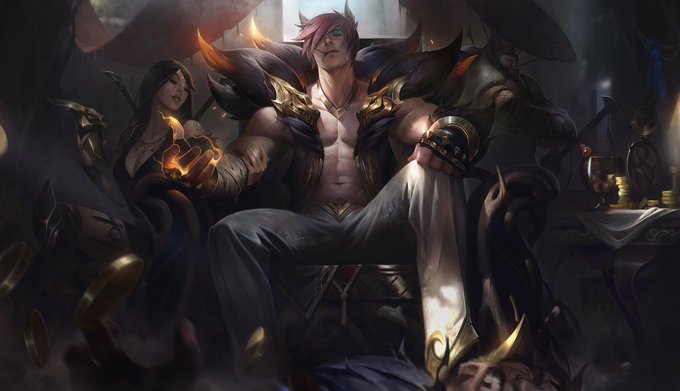 Known as a “smokin’ hot new juggernaut,” Sett has the appearance of an attractive, muscular male with a scar across his face. He’s known as “The Beast-Boy Bastard” among his neighbors. His half Ioanian Vastayan and half Noxian human blood resulted in his being ostracized from his friends, family, and community. To make matters more difficult, he grew up without his father. Unfortunately, his half-blood, father-less self led to him being teased throughout his childhood.

As a result, “Sett grew up quickly, becoming calloused in the face of the taunts and threats he endured, and before long, he began using his fists to silence the insults.”

Against his mother’s disapproval, he made the realization that fighting was the only thing he enjoyed doing. He fought within the pits of Ionia against other fighters. Later on, he found the truth behind why his fighter father disappeared: “His father had bought out his contract and left to tour more profitable pits abroad. He had deserted his family, to seek fortune on the other side of the world.”

He hopes his father returns to the pits someday so he can challenge him to a fight. As he runs the underground fighting hub, he’ll continue to fearlessly stand up to his contenders.

Other Vastayan champions include Ahri, Xayah, and Rakan. There’s also some hint of Draven possibly being involved with Sett as he is a Noxian fighter himself. Sett’s impressive strength seems to mimic that of Alistar, another fighting champion in the game. As Riot’s Lead Producer of champions, REAV3, pointed out: “If you like letting your fists do the talking, getting into the heat of a pit fight, and smashing your opponents’ heads together, this may be just the champion for you.”

It’s been quite some time since Riot released another Juggernaut champion. Many players are speculating that he may be placed in the top lane. Although not much is known yet about Sett, SkinSpotlights uploaded a new video showing his special interactions. In plenty of his in-game quotes, he refers to both his father and mother.

In the past week, players have been receiving emails teasing the arrival of Sett. But while everyone’s looking forward to Sett — don’t forget Aphelios is on live servers and needs some lovin’ too!

Stay up to date with all of your League of Legends news at Daily Esports!