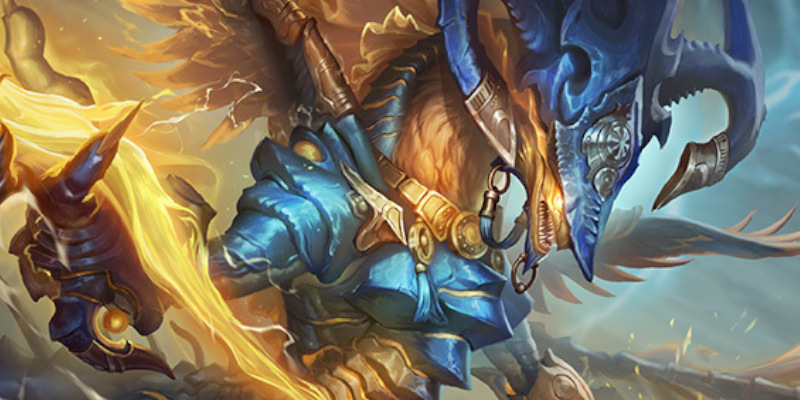 SMITE’s newest playable deity, Tiamat, is now live. Tiamat is the first character of the MOBA game’s Babylonian pantheon and she is more than a simple mage; her unique gameplay features allow her to have two mage stances.

Tiamat’s flexibility on the battlefield is reflected by her Death Begets Life passive. When she is in the air, she gains health from the death of nearby enemies and allies alike. If on the ground, she can get ahold of Hardened Scales for damage mitigation.

Only five of these scales can be gained at a time and they cannot be farmed from normal minions. Her Grounding Dive ability lets her dive down on all fours and deal damage. When used, this ability provides a Hardened Scale.

Another one of her abilities is Primordial Onslaught, which lets her channel orbs of fire energy to deal damage to enemies. When she hits the same enemy, she deals 15% less damage.

With Ruination, Tiamat deals low damage in a triangular area followed by more damage in the inner part of that same area. If enemies are hit within the inner area, then they will be stunned for a short amount of time.

SMITE’s newest playable character can also summon her children into the fray as her ultimate. With Children of Creation, she calls for the help of serpents that go down lanes like minions. Every 10 seconds, two Serpents of Tiamat spawn and attack nearby enemies to reduce their damage.

Another option is to summon the beast Kusarikk, who can stand guard and wait for enemy gods to come close to his range. Once an enemy is near enough, Kusarikk charges, attacks and slows them. He can be placed at a target location.

Tiamat is not without Summon Storm: Umu Dabrutu as an option, either. After calling on Umu Dabrutu’s powers, a violent storm appears on the battlefield and follows the player’s enemies to knock them upwards.

As for Tiamat’s lore, she is known as the begetter life and the mother of creation. Before her arrival, there was only chaos in the world. After destroying that, Tiamat filled the void with the primeval waters of creation.

This resulted in not only her eldest children, but also a variety of monsters made to fight back against the treacherous deities created by her children. Now on the SMITE battlegrounds, Tiamat is once again waging war against any deities who dare to go against her.

Dishant “Clumzy” Samtani, one of the game designers behind Tiamat, said in a press release that as the Goddess of the Salt Sea and the primordial queen, Tiamat is a labor of love created by Titan Forge Games.

“We wanted to go above and beyond, especially with Tiamat being the first God of the Babylonian pantheon,” Clumzy added. “From her gorgeous visuals, animations and in-game presentation to the dual-Mage archetype ability kit, we hope our players enjoy her as much as we did bringing her to the game.”

Along with being SMITE’s first playable character of the Babylonian pantheon, Tiamat is also the first character who can duplicate jungle buffs, according to an official blog. These buffs can be left on the battlefield for her allies and picked up by herself.