It has been awhile since we have heard anything from Bandai Namco’s flagship weapon-based fighting game title, Soulcalibur VI. On Saturday, though, we got some exciting news about the game’s future. Bandai Namco dropped a trailer for the fourth and final DLC character for the game’s second season of post-launch content — Hwang, one of the original cast members of the series.

Hwang’s first appearance goes all the way back to Soul Edge, the first entry in the franchise. That is before it was renamed to Soul Blade in the West. Hwang also appeared in Soulcalibur, the sequel to Soul Edge, as well as Soulcalibur III. Hwang has gone under some serious changes since his original appearance, and Soulcalibur VI takes that even further than before.

He is now sporting a look that is so similar to a Bloodborne Hunter, it would be comical if it wasn’t intentional. He also features a series of talisman and magic based moves. His Critical Edge attack (the equivalent to super combos in Soulcalibur VI) is especially dynamic, featuring a Kamen Rider style kick. The trailer hides Hwang’s appearance for the first half, despite his name being in the thumbnail, as he saves Seong Mi-Na from some shadowy fighters. 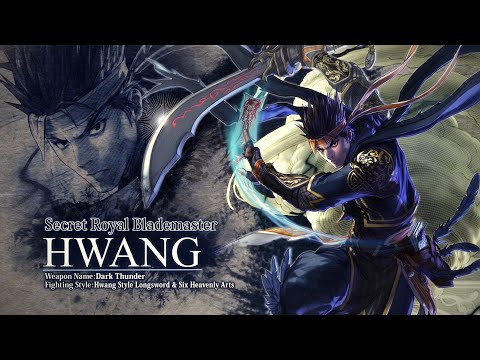 Some new costumes to go with your new character

In the latter half of the trailer though they give up the act and reveal Hwang underneath the mask. Despite the fact that he looks much cooler with the hat and mask, but I digress. In addition to the Hwang DLC, there will also be a second set of DLC, DLC 14, that contains new character creation pieces. This set will contain the return of some popular costume pieces, in addition to some more Tekken themed creation pieces from characters like Paul Phoenix, King, Xiaoyu, Leroy Smith, and more.

There will also be a free update containing a new stage, “Motien Pass Ruins,” a classic Seong Mi-Na costume set, and new story episodes for Mitsurugi and Nightmare. Both new DLC packages will be available this Wednesday, December 2. Soulcalibur VI is available right now on PS4, Xbox One, and PC.