Welcome back to part three of our coverage of Street Fighter League, with Week 4 of Season 3. This week saw the most intense matches we have seen since season 3 began. Every team showed up with dominating performances, clutch comebacks, and the high level of play to be expected from players of this caliber. The first team battle of the night was team Dynamite with Smug, MenaRD, and Gamerbee versus AngryBird, BigBird, and Samurai of team NASR. Then the second half of the night saw team All-In, coming into week 3 with the only 2-0 record, consisting of iDom, SKZ, and 801 Strider versus Psycho Shinobi with HotDog29, Caba, and Xian.

Starting the night off was Smug’s G versus Big Bird’s Rashid. Dynamite went with an Akuma ban targeting Samurai and NASR once again picked Balrog targeting Smug. BigBird took the first game decidedly 2-0, and Smug was able to bring it back in game two taking it 2-1. However BigBird swung the momentum right back in Smug’s face taking game three 2-0 and the match with it. Smug’s G is still a force to be reckoned with, as we saw last week, but BigBird finally being able to use his main, Rashid, made a huge difference. As noted by BigBird catching a dash with an EX tornado in round one of game three. BigBird was also able to finish the match with a perfect KO in the final round.

Next up was MenaRD versus AngryBird. Both players opted for the blind pick and everyone was shocked to see MenaRD pick Sakura. AngryBird also went with Zeku, a less surprising but still notable pick. MenaRD continues to show why he is one of the best to play the game as this Sakura pick stole the show. Mena took game one 2-0 but AngryBird was able to pivot and take game two 2-1. In game two AngryBird missed his confirm into super in round one, but he was still able to bring it back together. AngryBird was smartly punishing Mena’s relentless aggression. However, game three saw Mena able to pull off an amazing 2-0 victory with masterful spacing. Both teams were now tied up 1-1. 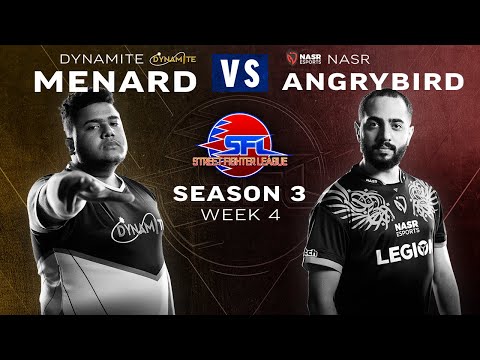 The zen of Samurai

The third match, after some beautiful smacktalk courtesy of Dynamite, was Gamerbee’s Seth versus Samurai’s Ryu. Samurai won game one 2-0 displaying amazing pressure with Ryu in almost zen like state that Ryu himself would have been proud of. Gamerbee then forced a timeout in round two of game two playing a battle of attrition with Samurai. Another grindy round closed out game two with Samurai taking it 2-1. NASR was now ahead 2-1. This was also the first week for NASR that AngryBird did not play in the anchor position, as this week that position was held by Street Fighter League veteran, Samurai.

With the night on the line for Dynamite, the fourth match was MenaRD’s Sakura versus BigBird’s Rashid. Right away there were huge momentum shifts within the same round, as Mena punished an EX Eagle Spike for round one of game one. Despite some amazing reads from Mena though, BigBird was able to take round two. But Mena was able to swing it back around again and take game one 2-1. Mena proceeded to dominate in game two using a raw V-Trigger combo to end round one and then steamrolled through round two taking game two 2-0. It was now tied up again 2-2.

After some surprising smack talk from Gamerbee (Smug and Mena may be bad influences on him…) was easily the highlight match of the night, MenaRD’s Sakura versus Samurai’s Ryu. Both players played the shotos to their maximum potential. Samurai pulled off an amazing parry during the set but Mena was still able to take game one 2-1. Samurai then exploded into game two unleashing his aggression and closing the set with a decisive 2-1 victory. It was now all down to game 3. Samurai seemed to go Ultra Instinct into this set taking round one but Mena’s impeccable ground control tied up game three 1-1. 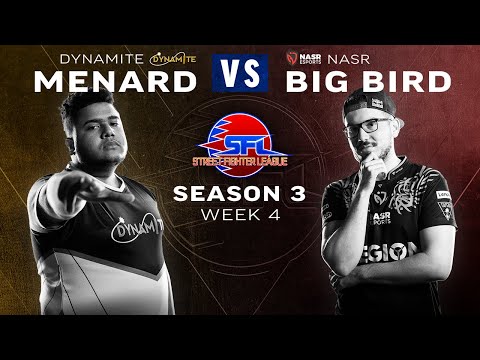 It was now the final round of the final set, winner take all. An amazing shimmy at the end of the round took the round, the match, and the week for Dynamite finishing 3-2. MenaRD was able to take down every member of team NASR himself. He then stated in a post match interview with RobTV that Ryu is actually not a great matchup for Sakura in Street Fighter V. Despite this, Mena’s amazing performance not only won his team the night, but also the play of the day at the end of the night.

There was still an entire second team battle to go as All-In took on Psycho Shinobi. All-In decided to once again ban Guile targeting Caba, and Psycho Shinobi took G off the board for 801 Strider. This left iDom free to use both of his mains, Poison and Laura. The first match was 801 Strider’s Urien versus Xian’s Seth. The lack of G definitely affected 801 Strider as Xian was able to take this first match decisively in game one 2-0 and game two 2-1.

The second match was SKZ’s Seth versus Caba’s Ryu. SKZ was able to take game one handily 2-0. Some words of encouragement from HotDog29 seemed to light a fire under Caba though as he took round one of game two with gusto. However SKZ was able to take the next two rounds winning game two 2-1. Seth is an incredibly hard matchup for Ryu and the Guile ban seems to be really taking a toll on Caba. In the second half of the season though, these bans will be gone and whoever faces Psycho Shinobi will have a fully unleashed Caba to deal with. For now though, both teams were tied up 1-1. 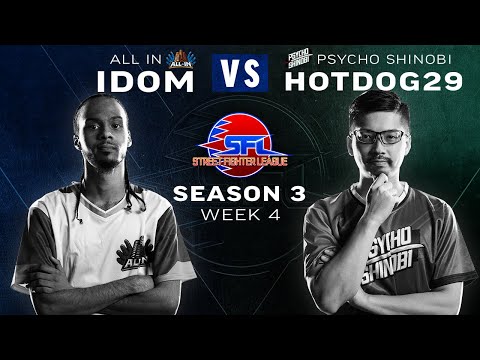 Moving into the third match was iDom’s Laura versus HotDog29’s M. Bison. Both players had shown dominating performances in the last few weeks and this was one of the most anticipated matchups of this season of Street Fighter League as both captains faced off. There were some huge momentum swings in game one moving from iDom to HotDog29 and then back to iDom again to take game one 2-1. HotDog29 wasn’t out of it yet as he wins game two 2-1. After a clutch third round though, iDom was able to take the set winning game three 2-1.

The fourth match of the night was a Seth mirror between SKZ and Xian. Xian was using V-Skill and V-Trigger 2 while SKZ was using the standard V-Skill and V-Trigger 1 setup. Xian has been on record before saying he prefers the second set of V maneuvers and this match showed why. Xian missed a stun punish at the end of the second round of game one but SKZ followed it up with an unsafe EX Mad Cradle to help Xian finish game one 2-0. Xian then went on to also finish game two 2-0 showing off his dominance of the Seth mirror and the power of V-Trigger 2. Both teams were again tied 2-2.

The fifth and final match of the night was iDom’s Laura against Xian’s Seth as once again the fate of Psycho Shinobi rested in his hands. iDom showed no fear in game one challenging Xian with his back against the corner to take round 2 of game one. iDom then went on to take round three and the set 2-1. In game two iDom took round one with a jab’s worth of life left and finished the set taking game two 2-0. iDom continues to show that there are two Laura’s in Street Fighter V, his and everyone else’s. All-In finishes week 4 of Street Fighter League with a 3-2 victory over Psycho Shinobi. 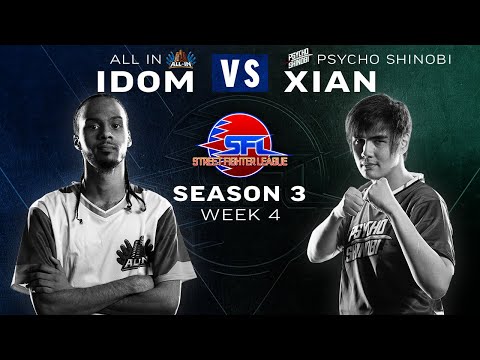 Both team battles went down to the wire with amazing performances from both teams but MenaRD and iDom continue to be the highlights of this season of Street Fighter League as we move into week 5. Next week on November 5 will see the now 3-0 All-In versus team Dynamite, as well as UYU versus Alpha 3. The stream will begin at 7 PM ET and you can catch it on the Capcom Fighters YouTube and Twitch channels.