It has been a long time coming, but Tekken 7 Season 4 will finally release tomorrow. To celebrate, Bandai Namco released a launch trailer highlighting what this new season will bring to the game.

The biggest news is the next DLC character coming to the game: Kunimitsu. This version of Kunimitsu is actually the daughter of the original fox ninja, so she operates a little differently. Still, most of her moves should be familiar. She comes with her standard costume, a super cool looking “urban ninja” outfit, and the “Tenko set,” the latter of which has some big Yoshimitsu vibes. This makes sense, considering how closely connected the two are story-wise.

Kunimitsu will also come with a new stage, Vermilion Gates, which looks absolutely gorgeous. On the gameplay side of things, each character will receive new moves along with a massive balance overhaul to the game as a whole. The accompanying patch notes are huge, clocking in at 49 pages long. There’s one page for each character, along with a few general system changes listed on the first page. You will have to download the notes via a zip file from the site. Along with the patch notes is a list of wall-bound moves for each character. Since they are not identified as such in each character’s move list, this will help you know which moves to incorporate into your wall combos. 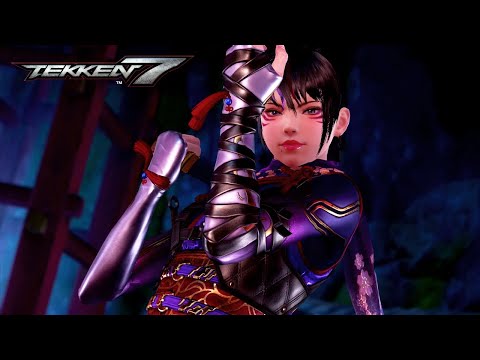 On the system side, the main menu and health gauge UI has also seen some changes. Most important, though, are the changes made to online functionality. The rollback and netcode have undergone improvements to improve latency and reduce lag. Early word from the community is very positive on these changes. One of the most requested features for the game has also been added: a wi-fi indicator. Now you can see if your opponent is running a wired or wireless connection and pick your matches accordingly.

A new highest rank has been added to ranked mode as well. “Tekken God Omega” is now the highest rank available in the game. Also introduced is the “Tekken Prowess” system. This new ranking system will rate you for your overall achievements in Tekken 7, not just ranked battles. When your Tekken Prowess rank increases, the color of your player name will also change. Tekken Prowess is calculated through a player’s highest owned rank, their total rank of all characters, play stats, and the number of matches played. This new system should provide players with a much broader sense of their overall skill in the game.

Lastly is a special crossover with Pac-Man to celebrate the icon’s 40th anniversary this year. The Arena stage will now feature a Pac-Man inspired look and music for a limited time. Additionally, you can unlock Pac-Man related accessories, such as t-shirts, plushies, and a special player customization set. It is unknown how long the crossover promotion will last, but it likely won’t last very long.

The next battle is right around the corner

Tekken 7 Season 4 releases tomorrow, November 10, for PlayStation 4, Xbox One, and PC. There is no price for how much the pass will cost, strangely enough, but we will update this article tomorrow when that information goes live. The good news though is that the balance changes and all the system and network improvements are available right now via a free update. Since this pass will only contain two characters and stages, it should presumably be a little cheaper than the previous season passes, which clocked in at $24.99. The next character and stage are slated to release in the spring of 2021.