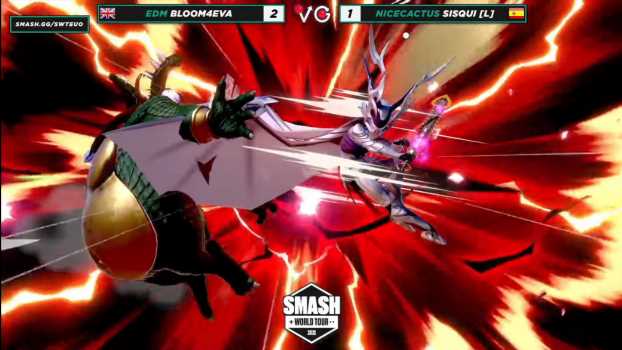 The Smash World Tour made its way to Europe this past weekend for one of its most stacked qualifier tournaments yet. Here are some of the major takeaways from the upset-filled bracket at the SWT Europe Ultimate Online Qualifier.

Going into the SWT Europe Ultimate Online Qualifier, Oliver “Bloom4Eva” Alexander was a plausible pick for first place. He is the highest-ranked of only two Europeans who appear on the Wi-Fi Warrior Rank v6. Still, he would have to deal with a plethora of offline threats looking to qualify for the in-person Regional Finals. Additionally, Bloom4Eva would have to wrestle with the inconsistencies of his own character, Bayonetta.

Interestingly, Bloom4Eva and sisqui both opted to switch to secondary characters for their grand finals set. So, while sisqui tried to fight with Donkey Kong and King K. Rool, Bloom4Eva secured a 3-1 victory with his Corrin, another rarely used character.

Glutonny makes do with a nerfed Wario

Though he is Europe’s best offline player, qualifying was no easy feat for William “Glutonny” Belaid. His character, Wario, was heavily nerfed in the most recent patch, making it harder for him to combo into his Wario Waft kill move.

Despite this setback, Glutonny was able to make a run to third place at the SWT Europe Ultimate Online Qualifier. He fell into losers early, suffering a 3-0 loss to Vidad. However, he quickly reached top 12 with 3-0 wins of his own against Sem “Supahsemmie” J. and “Noxumbra.”

Before he finally fell to sisqui in losers finals, Glutonny looked dominant in the losers bracket. He swept every opponent in his path without dropping a game. Glutonny still managed to find setups into his Wario Waft; while also attacking with extended combos and mixing aggressive offstage edgeguarding with precise onstage ledgetrapping. As a result, Glutonny eliminated Arsenio “PurpleDebo” J., Tomberry, Vidad and Freetox_.

Ended 3rd at the SWT qualification !!

As the only WWR-ranked player besides Bloom4Eva, Clement “SuperStriker” Madison was another fairly safe pick to do well at the SWT Europe Ultimate Online Qualifier. However, he suffered an early upset to “Raphy” in phase two of pools. Then, he lost to Supahsemmie, who had been upset in phase one of pools.

SuperStriker made use of Sonic’s strengths, patiently waiting for opportunities to quickly approach with Sonic’s Spin Dash or Spin Charge, racking up little bits of damage at a time before resetting the neutral. In addition, he showcased his ability to edgeguard with back-air and the spring from Sonic’s Up-B, while employing forward smash both as a ledgetrapping tool and a raw punish option.