In World of Warcraft, the Horde and Alliance are gathering their forces on a dying planet in order to stop the inter-generational warfare that plagues their people and overthrow the newly freed Old God N’Zoth.

Meanwhile, in Hearthstone, a bunch of baddies have stolen the flying mage city of Dalaran by strapping rockets to it. Now, I have to take the role of a crew of plucky archeologists, and fight through an Indiana Jones-style adventure in order to save the world.

Hearthstone has always been the lighter setting compared to its big brother in the Warcraft franchise, but it feels as though the game is finding its feet to tell more ambitious tales with the release of The Dalaran Heist and its sequel, Tombs of Terror. The competitive side of Hearthstone is always going to be a big priority for Blizzard, but I find myself increasingly intrigued by the game’s solo campaigns.

Tombs of Terror continues to build on the foundation of previous solo campaigns, taking inspiration from The Witchwood and The Dalaran Heist, among others, to create something chaotic yet replayable.

Players progress through Tombs of Terror one chapter at a time. They pick a character who combines two of the traditional classes together: rogue/mage or shaman/paladin, for example.

Players then fights bosses with their character’s unique decks and, along the way, pick upgrades and artifacts that change the way they play. That means I can choose everything from my standard hero power that I can use each turn, to random draws of unique spells, or powerful weapons to equip, to new combinations of powerful cards from the base game that get inserted into my deck. Along the way, I have chances to recalibrate my strategy in a non-combat “tavern” encounter.

Dual-class characters were almost introduced in 2018’s The Witchwood expansion, but the new kind of hero wasn’t quite ready, Blizzard said.

“One of the reasons we did it here is we really wanted to focus on our four heroes; we didn’t want to try and introduce nine explorers,” said Dave Kosak, lead missions designer on Hearthstone, in a media interview for which Polygon was present. Dual class allowed those four characters to suddenly have much more depth than a traditional hero — as well as be much more powerful.

Kosak gave an example of Reno Jackson, a character who combines rogue and mage. By casting a bunch of quick spells in suggestion, a patient player can suddenly unleash a powerful Van Cleef. During my preview time with Tombs of Terror, I was surprised at how certain classes melded. The Explorers don’t feel as unique as protagonists from other expansions like The Witchwood, but there was more to tinker with. Even though I’m playing with a lot of familiar cards, I’m having fun with new combinations. 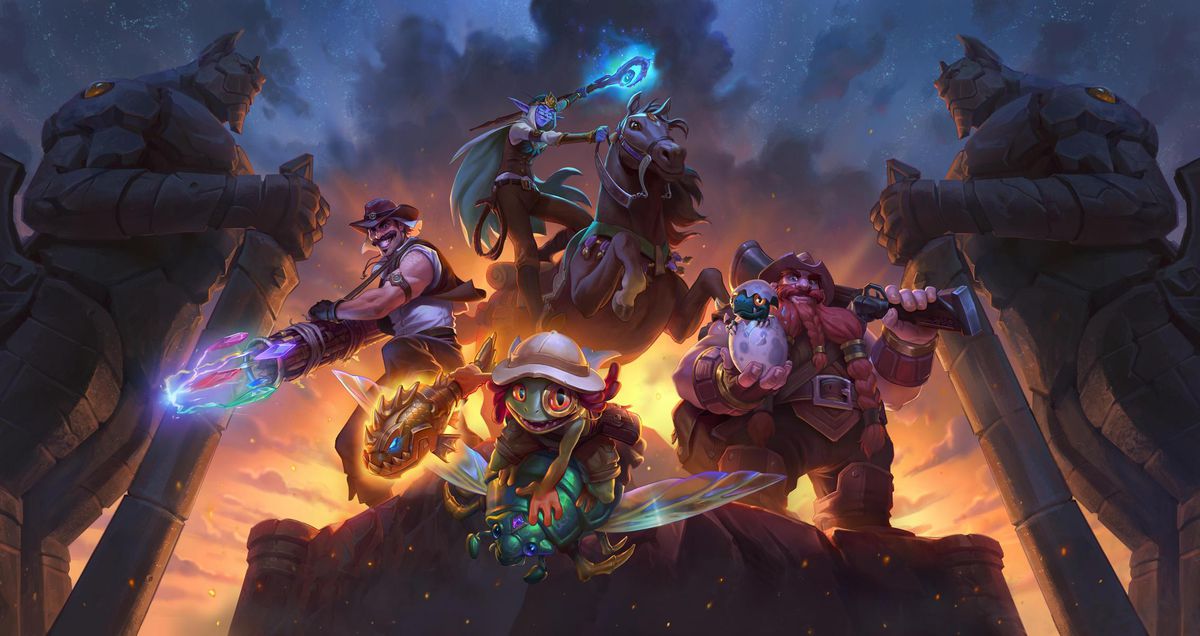 The League of Explorers are this campaign’s protagonists.
Blizzard Entertainment

In fact, there are moments where Tombs of Terror feels like a power fantasy. I greedily collect new artifacts and card combinations every time I down a boss. I pull off one or two really good hands and inflict major damage or do something really clever to clear the board or pull lots of minions. I pull out a druid minion and then priest buff it to ridiculous levels as Elise Starseeker, or use ol’ Reno to trigger a mage secret and rogue power in one turn.

And then a boss turns around and kicks me in the face. When Tombs of Terror swings back in the opposite direction, it swings hard. I had successful runs suddenly careen off a cliff, or build a powerful deck and then encounter a boss that negates every advantage I have.

“One thing we discovered with solo adventures is there’s a pretty wide skill range of players who enjoy it, and we want to make sure every skill level has an interesting challenge for them,” said Kosak. Sure enough, there are multiple difficulty options, and a new kind of boss fight helps even the deck a little more. If I make it through a run of bosses and meet the final encounter of the chapter, a Plague Lord, I can chip away at his health. That progress is saved even when I die, and I can continue to whittle away at him over my run.

Or, if I’m good at the game, I can jump into a much harder Heroic run and then one-shot the Plague Lord.

As a casual player, Tombs of Terror feels less like a deliberate strategy game and more like a luck-fueled joyride of big swings and steep drops. For some players, that might be a lot more fun — I found it to be a more wild, roguelike style alternative to Hearthstone’s PvP play. For those who prefer a slower pace and less room to swap a game around, the competitive format will likely remain their bread and butter. 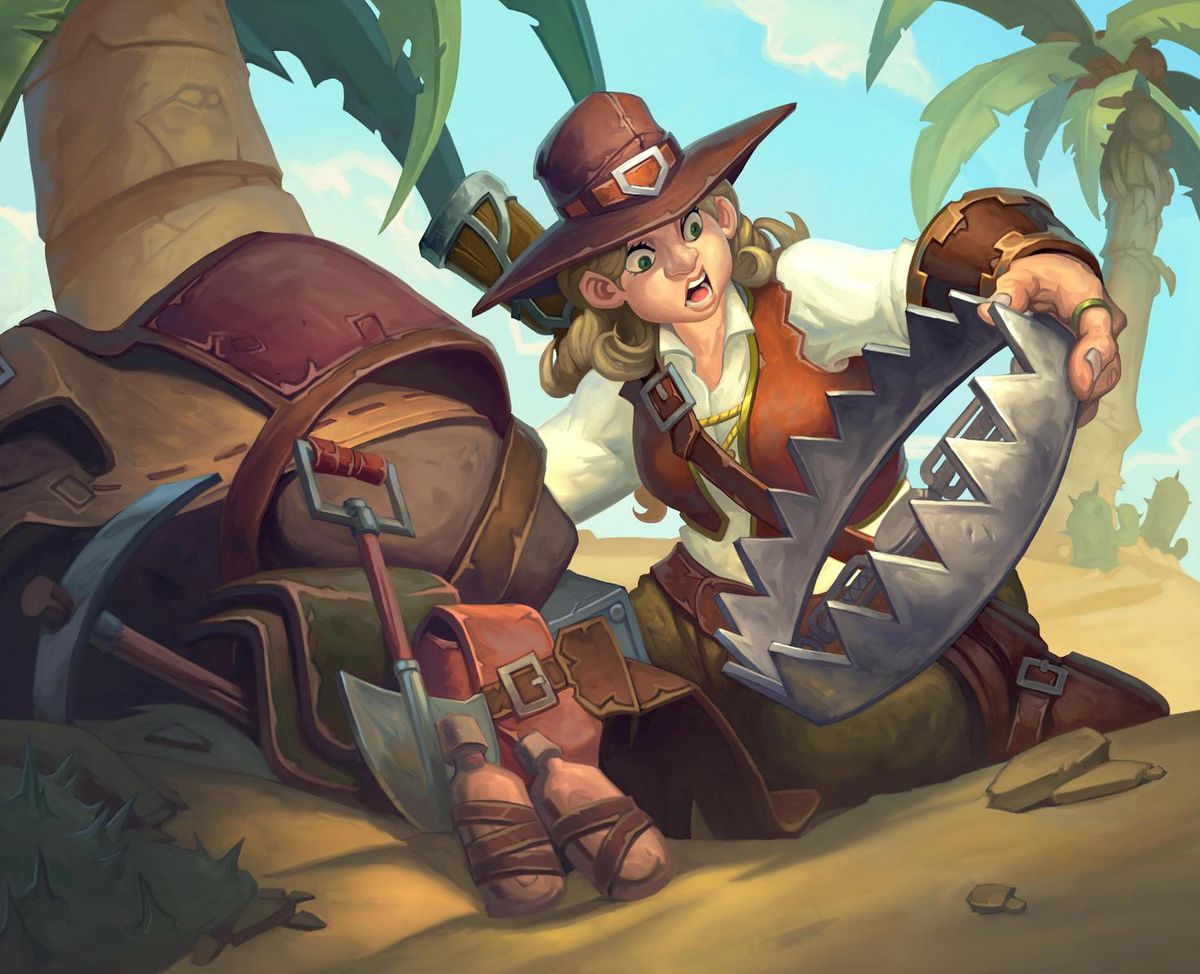 This campaign has a few surprises, some of which threw me.
Blizzard Entertainment

The risks of bees

Outside of the “wow” moments of big cards and combos, Tombs of Terror also benefits from the previous release of the Saviors of Uldum expansion, which brought a host of new cards to the standard rotation. One of the best of these is BEEEES!!!, a new druid card that unleashes four individual one-damage attacks on one target.

“BEEEES!!! came from a bottom-up design. It was one of those things where it was like, wouldn’t it be funny if you did multiple attacks to a minion? Then you could use it on your own minion to trigger an enrage or a card draw or whatever, or use it against an enemy. There’s so many ways to take advantage of it,” said Kosak. “Like, if you have a card that does something every time one of your minions is destroyed, you can earn four of your own minions in one card. It’s great. So we were like, ‘This would be really cool.’”

From there, it was a matter of deciding how that damage was inflicted, and then eventually how to present the idea of an insect swarm.

The first chapter of Tombs of Terror is out today for free; the next three chapters will be released on a weekly schedule for 700 in-game gold (or together in a $15 bundle). Saviors of Uldum is the second expansion of the year, and a middle chapter in a story that kicked off with Rise of Shadows. The third expansion, which is currently unannounced, will conclude the story.