Whether it’s creating a mechanoid army, or surviving the schemes of Randy Random, RimWorld can be a lot of fun. Each time you load up a fresh playthrough, a new story is waiting to be told. Such as the tragic fall of a prosperous spacer colony, or the unexpected perseverance of a neolithic tribe. RimWorld has a lot going for it, but that doesn’t mean certain features can’t be improved upon.

Things like additional quality-of-life features, and expanded gameplay options would help RimWorld take the next step into the stars. Of course, mods can fill in the gaps, but then you run into issues with inconsistencies in quality and game-breaking bugs. Fortunately, the continued release of updates and DLCs is a promising sign of more official RimWorld content to come. 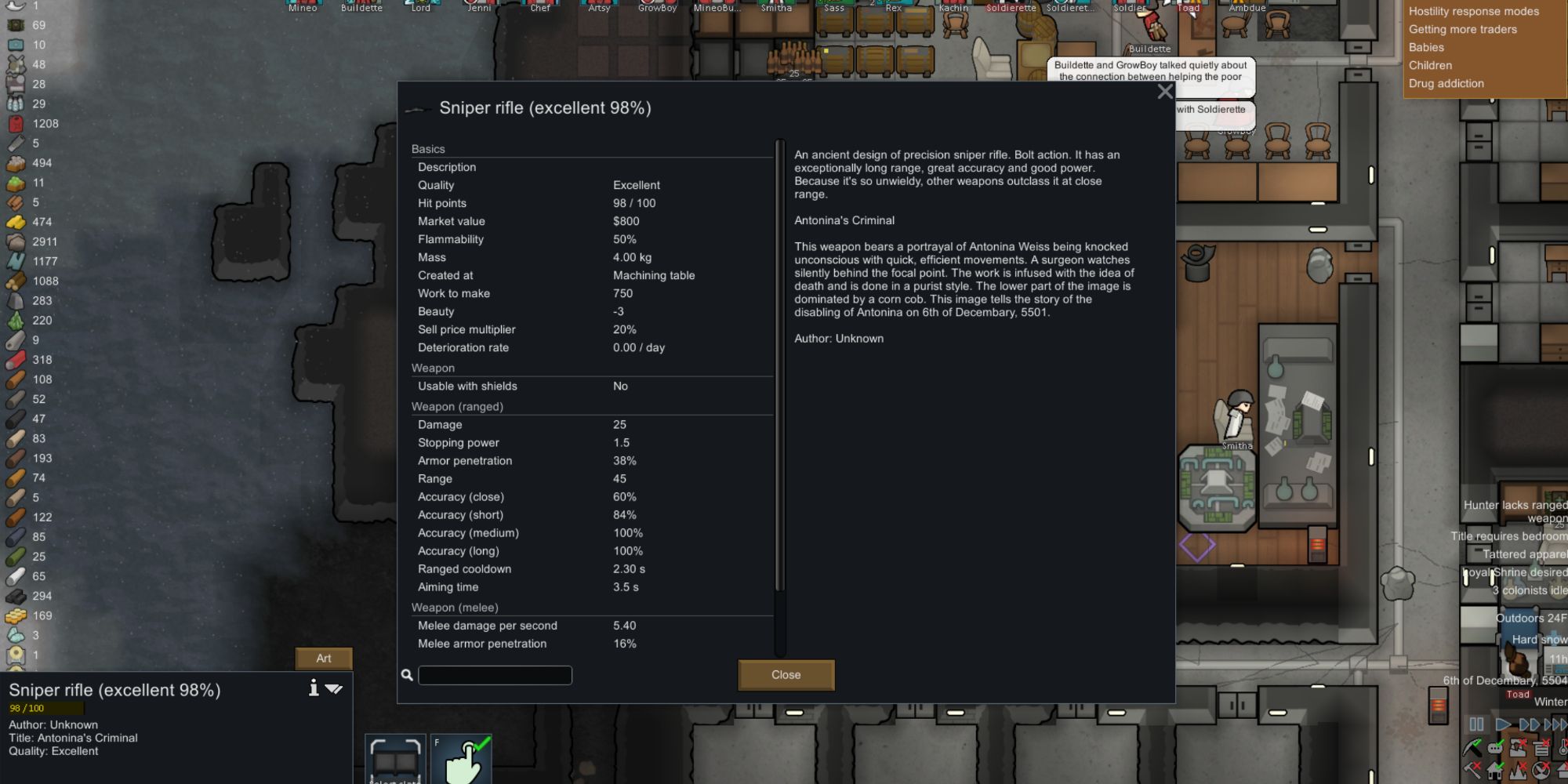 With all the bloodthirsty raiders who attack your colony, combat becomes an inevitable part of life on the Rim. RimWorld gives you a decent variety of weapons to work with, ranging from simple clubs to futuristic charge lances. That being said, the game could certainly benefit from greater variety.

Most weapons have objective strengths and weaknesses, so they fill particular roles depending on your tech level. For example, bolt-action rifles are surpassed by sniper rifles, which then eventually get replaced by the charge lance. Greater weapon variety could bring more options to the table for each combat situation, and it won’t box you into following the same weapon progression in each playthrough. 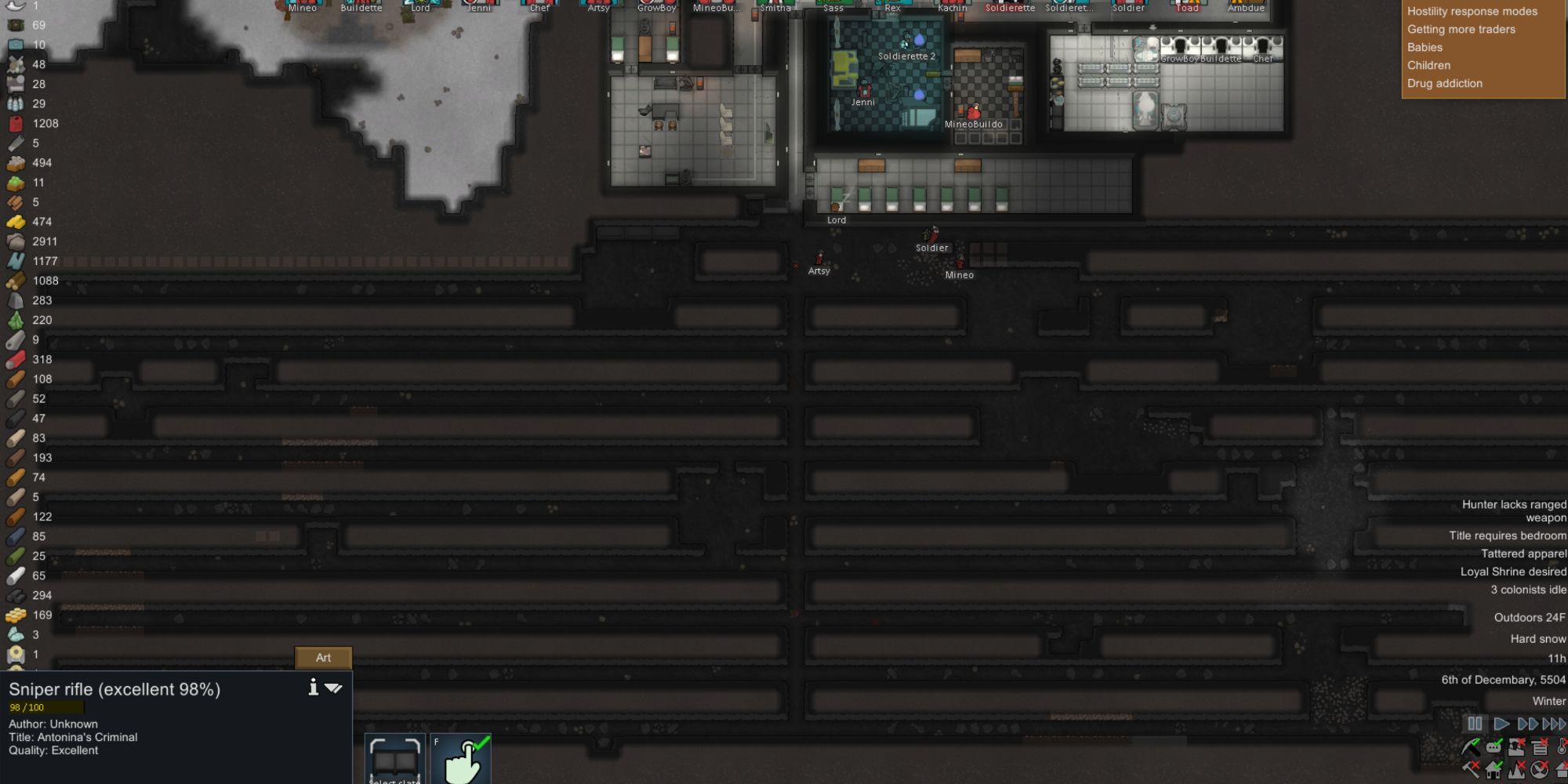 RimWorld has a pretty robust building system that covers all the essentials of colony life. Roofs, floors, and even rough surface smoothing are included. However, one notable feature that the game lacks is the ability to build with multiple floors. You can dig deep into a mountain, but it will always follow the X and Y-axes.

Opening up the Z-axis would bring a lot more variety for base building. You could build a towering fortress, or create a deep underground labyrinth. It would also bring the additional benefit of compacting your colony designs so that they wouldn’t have to be spread out. 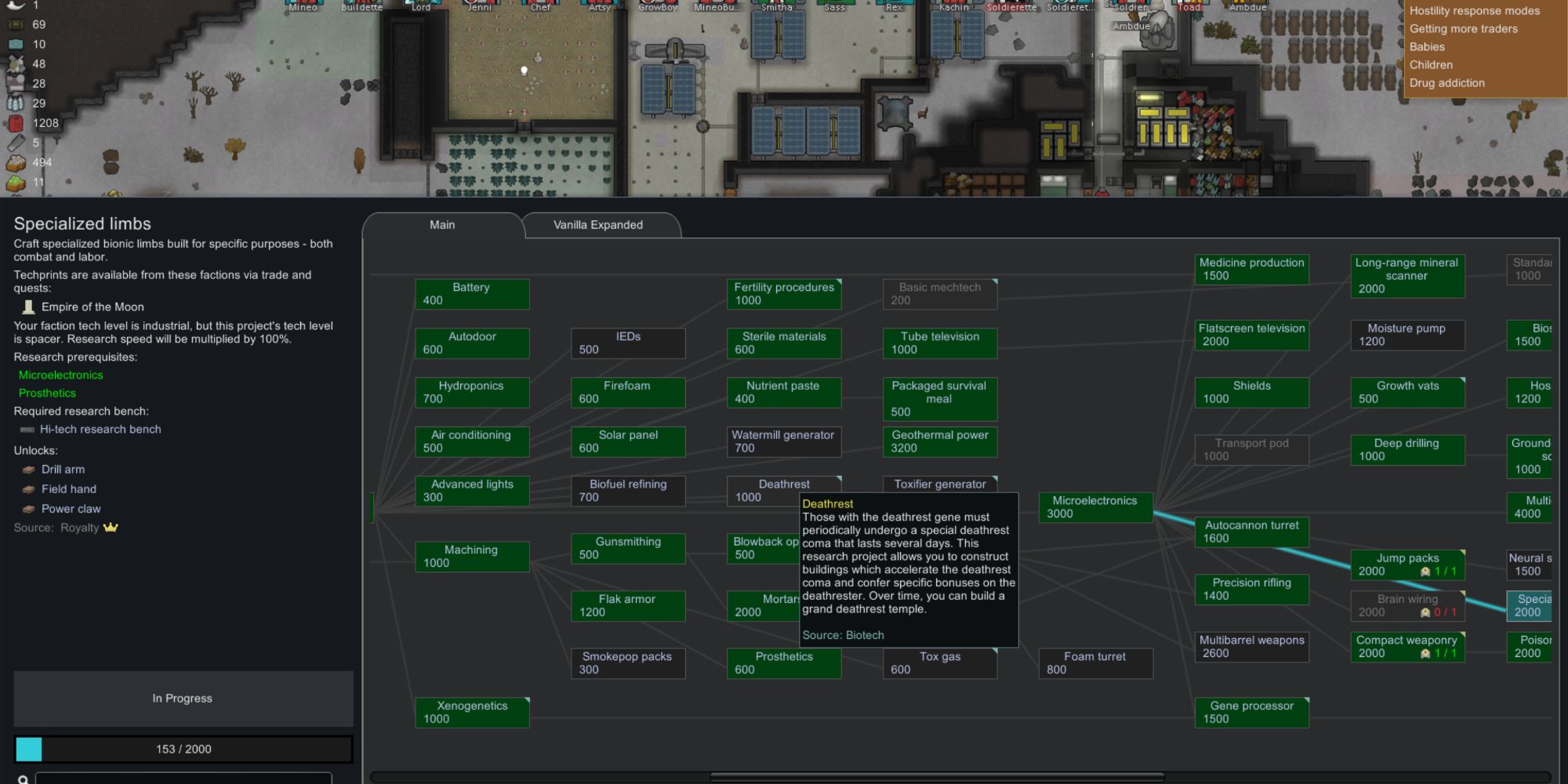 The RimWorld UI has remained largely consistent since its original 2013 release. That in itself isn’t bad, but the menus can feel a little dated. The menu lacks visual style, and options are generally sprawled out in large lists. This can be problematic for new players. There are a ton of options to file through, and tech progression starts to unlock even more building options in the architect tab.

Eventually, your furniture bar can become multiple rows long, and it can’t be grouped for convenience. Fortunately, the menus do at least feature a search bar. The RimWorld UI is completely functional and doesn’t negatively impact gameplay, but it could certainly be improved with a visual touch-up. 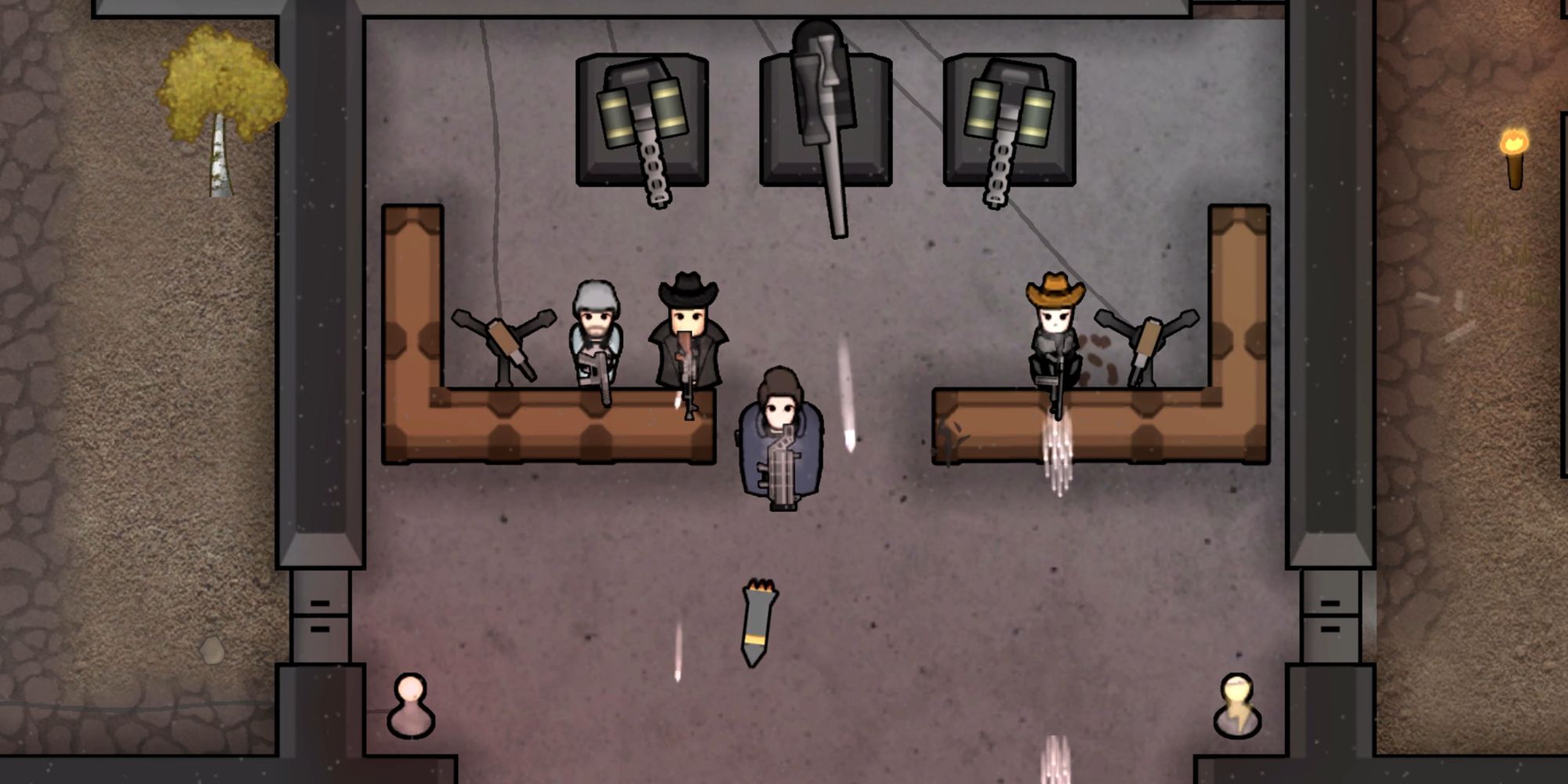 With colony defense playing such a large role in the game, it’s surprising how limited the defensive building options can feel. There are a handful of turrets, two classifications of traps, and two security structures. Materials can be changed at your discretion, but in general, security variety still feels like a missed opportunity.

A greater variety of traps, or interactable defensive structures, would be a great way to add more flavor to raid defenses. Just imagine holding a last stand in a manned turret against a wave of mechanoids. 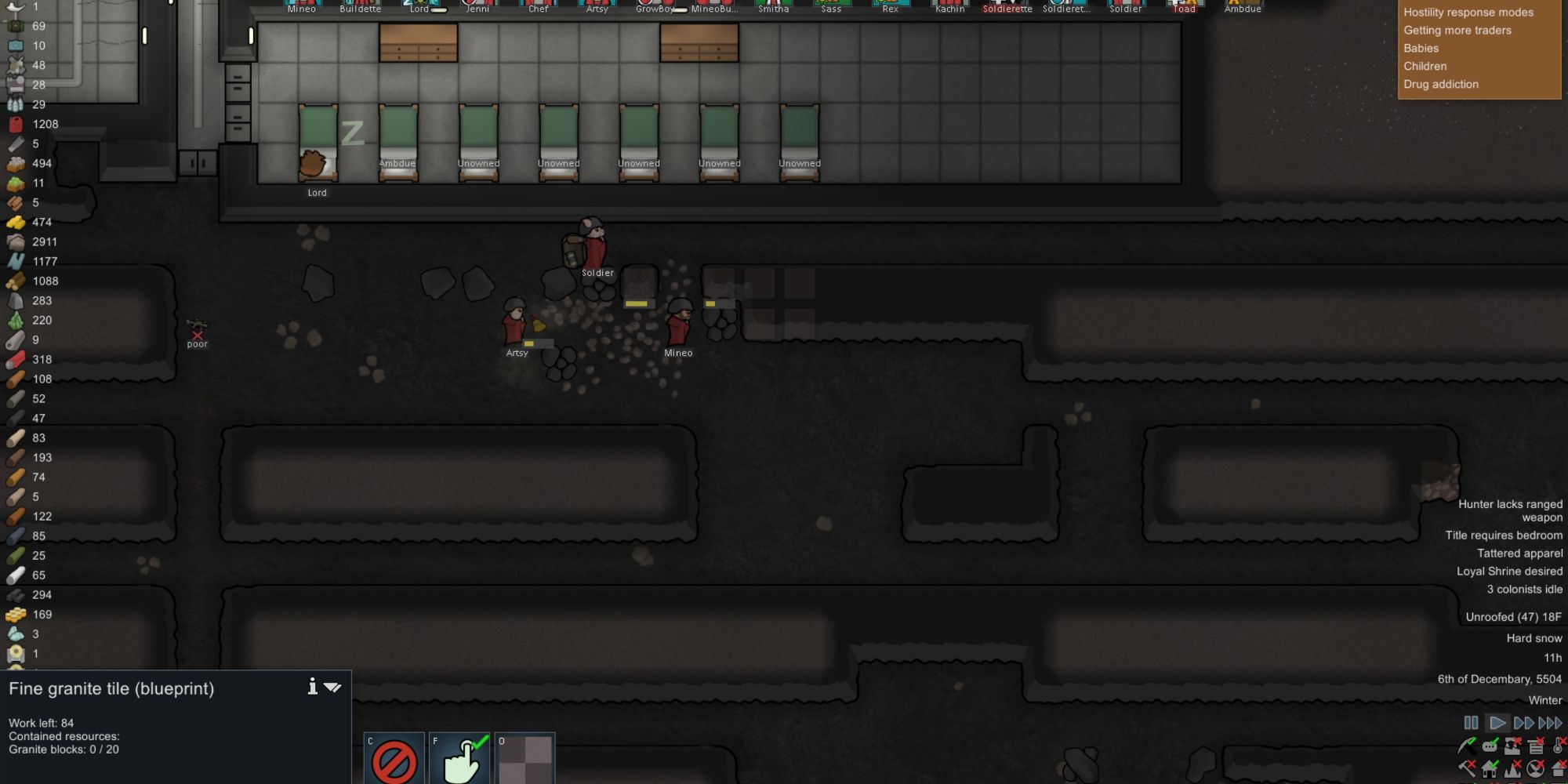 There's a lot going on at any given time while you’re playing RimWorld. Prisoners riot, manhunting squirrels run rampant, and your only doctor seems to always have a mental break at the worst time. With so much to see, it would be great if RimWorld had more animations to go along with the action. There are already a few animations, such as the firing of bullets or the sparks of construction.

Adding more of these kinds of details across the board would be a great way to translate colonist actions into a visually pleasing display. Reloading guns, animated melee attacks or just slurping on some nutrient paste could all have just a bit more energy with animations. 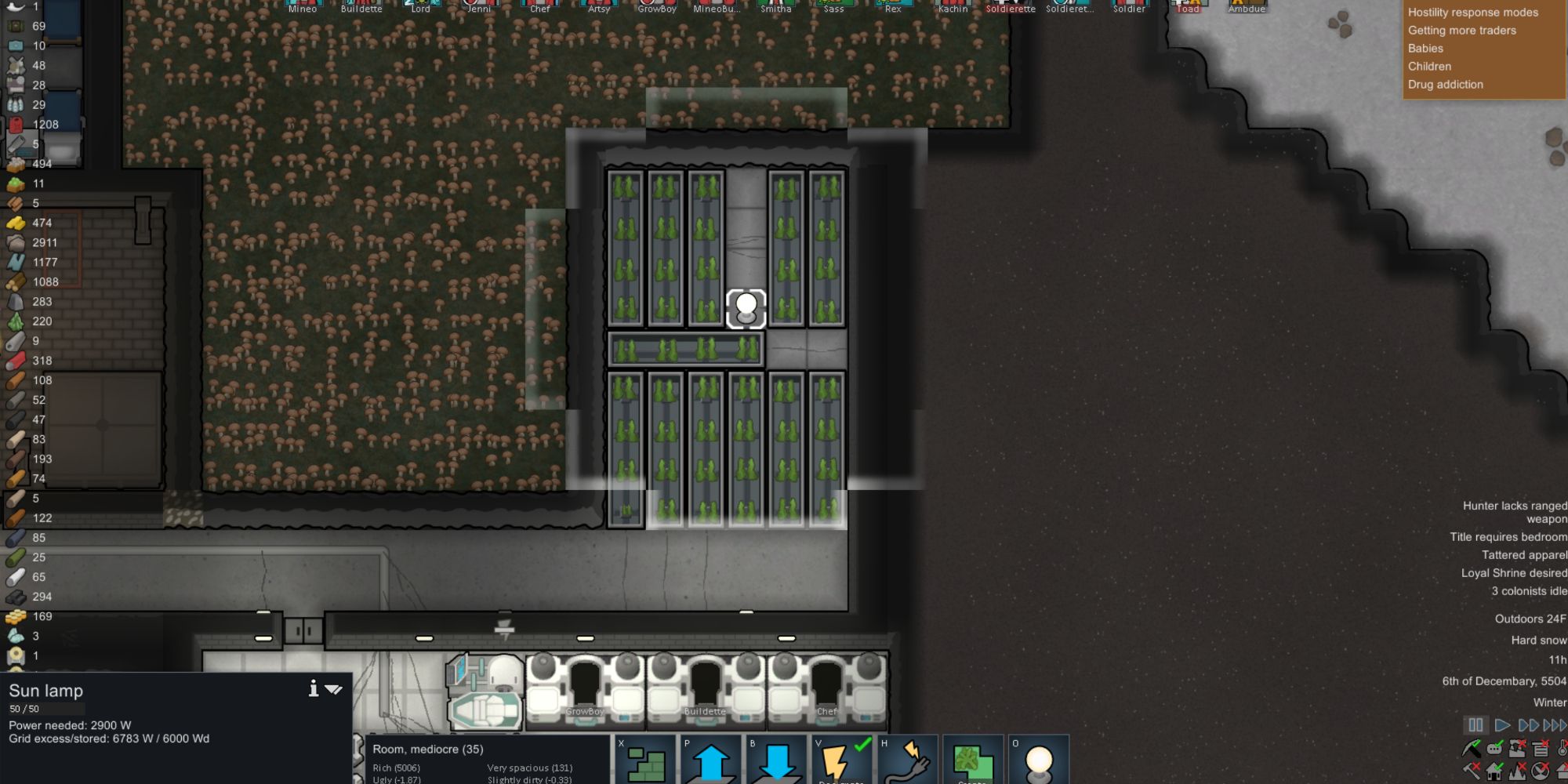 Lighting furniture in RimWorld is a bit bare-bones. You have the option of a floor lamp, a torch, two braziers, or a sunlamp. There are also dark-light variations, but those are essentially the same as their counterparts. Adding more furniture like cozy standing lamps, overhanging lights or a wall lamp would please every RimWorld player who has an interior design itch.

It’s true that these colonies are supposed to be on the fringe of space, and thus lacking in amenities. However, if more lighting options could be earned through the advancement of the tech tree, it would be both plausible and welcome. After all, if you can go so far as making an artificial growth vat, you should be able to make prettier light bulbs. 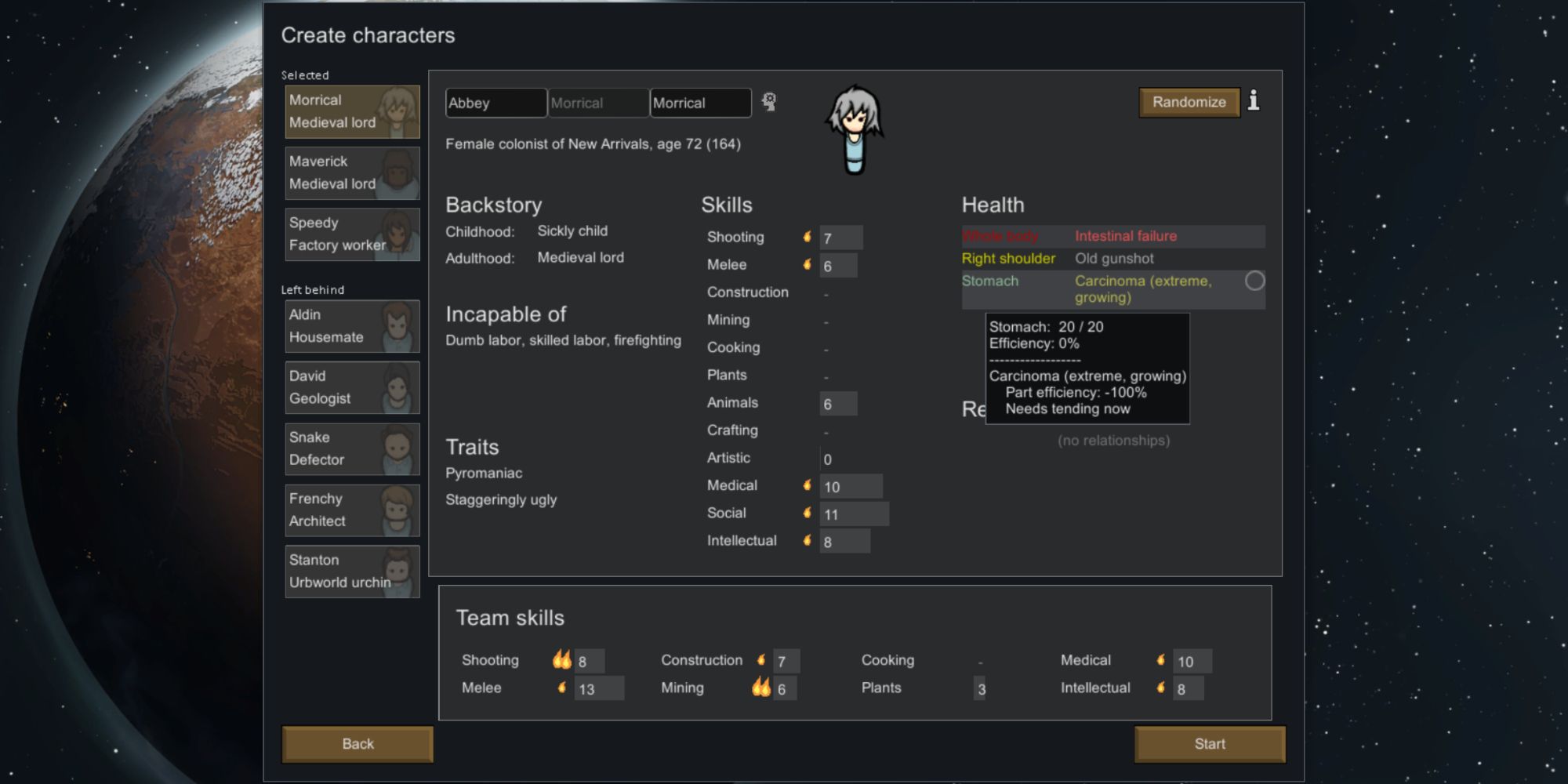 Creating a new game in RimWorld will have you selecting a set of randomized colonists to take with you. This adds an interesting layer to the storytelling of the game, as you are unable to create a super-powered squad that’s good at everything. However, after you play a couple dozen hours this starts to get old. If you want a specific type of pawn for role-playing purposes, your only hope is to keep randomizing a pawn until they come relatively close.

The lack of a character creation system seems strangely vacant for a game that puts an emphasis on creative storytelling. There is a popular mod on the Steam Workshop that covers this need, but for those who don’t have access to modding, adding a character creator system would be a great addition. 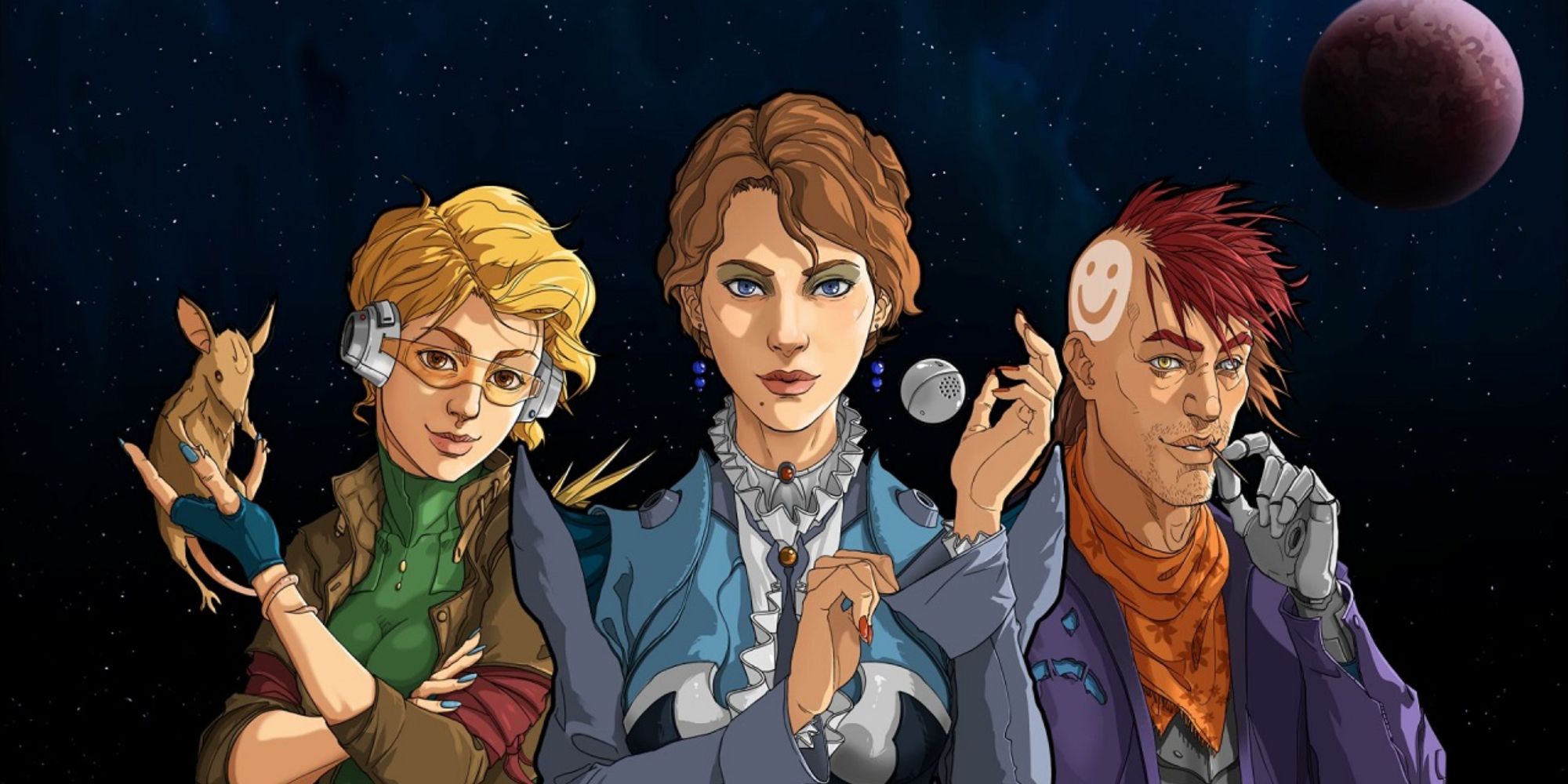 RimWorld’s base game features three different AI storytellers. These narrative directors essentially shape what kind of random events will befall your colony. Cassandra Classic will slowly ramp up difficulty. Phoebe Chillax takes it nice and slow. Randy Random will do things like sending a deadly raid one moment and tame every local rabbit the next. These three narrators offer plenty of gameplay opportunities, but they also lack any particular story theme.

For example, a narrator focused on guiding a story about your bandit colony could tailor raids and events to fit that theme. It would be very interesting to see different storytellers based on a variety of different role-playing topics. 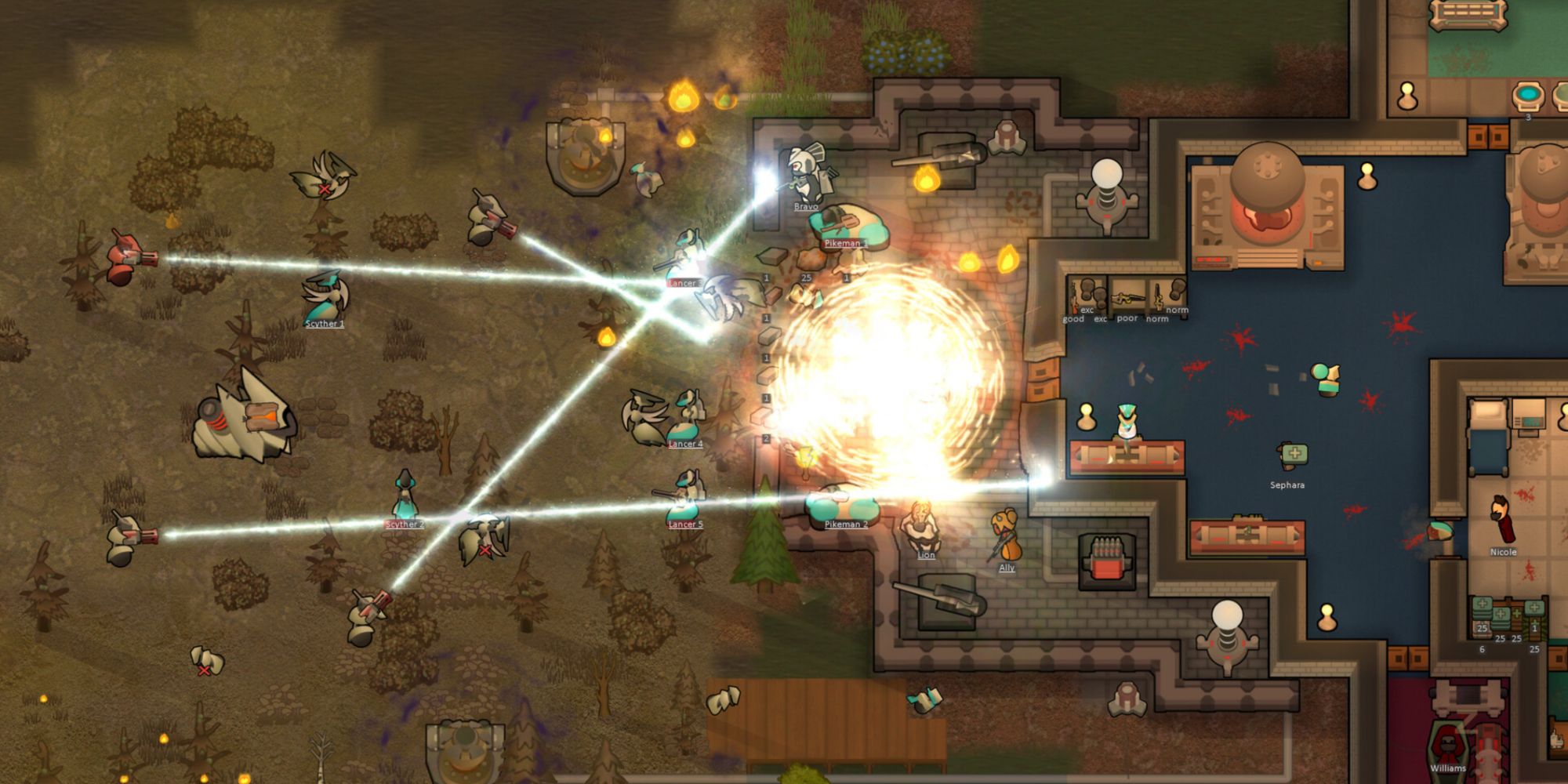 The AI storyteller ultimately shapes the world in an artificial manner. Groups will ‘visit’ your colony, but what that really means is that the AI has spawned the group based on current game parameters. RimWorld would feel much more alive if groups were actually simulated walking across the game world. Other settlements rising and falling, and trade routes of merchants going about their business would all contribute to a full simulation.

Instead of having events that revolve around your colony, it would be very interesting if events were simulated in the world regardless of your colony's actions. This would certainly affect game balance and difficulty, so a possible compromise would be to scale simulated events based on choices made during map creation. 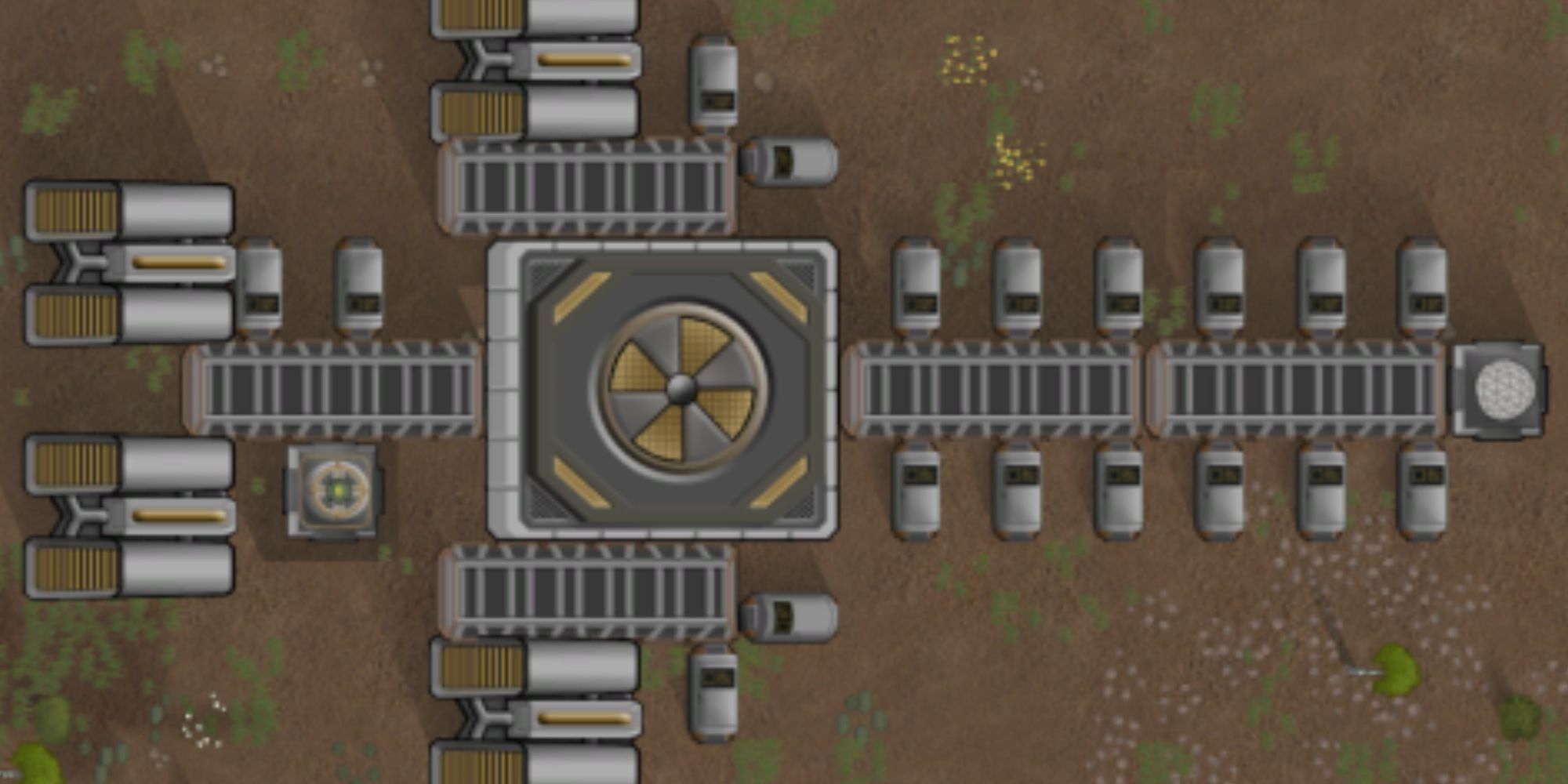 One of the main win conditions for RimWorld is to build a spaceship and escape the planet. It is a culmination of all the blood, sweat, and tears your colonists experienced throughout the course of the playthrough. But imagine if leaving the planet wasn’t the end of your story. Exploring the galaxy and interacting with other space-going cultures would be a fascinating addition.

Your colonists could evolve from survivors to a respected power in space. Visit other planets or engage in space battles, the stars would literally be the limit.