A love letter to the iconic Akira Kurosawa films with a supernatural twist, Trek To Yomi is an atmospheric tale of one man's pursuit of retaliation for the destruction of his village and redemption. The game takes its aesthetic inspiration from legendary early horror games such as Silent Hill and Resident Evil and marries it with Kurosawa's cinematography style.

Much of the lore remains hidden between items and NPC dialogue, so it's understandable there are things you might've missed on your first playthrough. Let's think of this list as something to whet the appetite of curiosity and maybe throw down a few of these terms into the search engine of your choice to find out more. 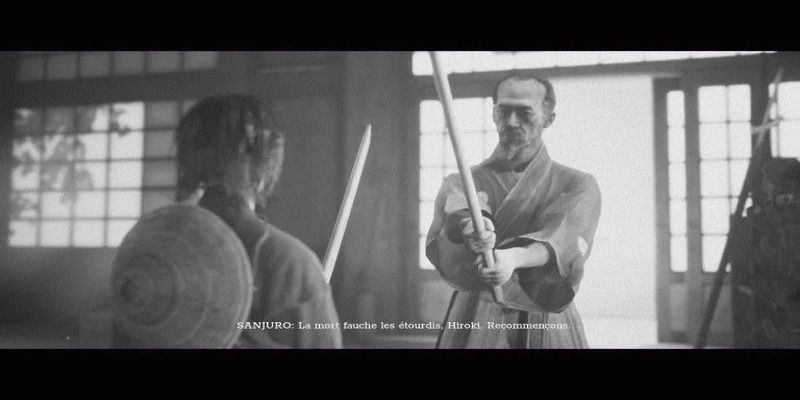 Seemingly taken in by his master, Sanjuro, Hiroki has been without his parents since before the start of the game. As the journey opens, you find out that his parent's relationship was not approved of, and they had to hide their love due to their differences in social status.

His mother was of Imperial blood, meanwhile, Hiroki's father was a man of the common folk. Someone who was a part of her family felt that they committed a heinous enough crime that they both deserved to die. Their death wasn't happenstance or chance, only someone who hated their love.

9 The Story Of Izanagi And Izanami

As told through Hiroki's narrative, Izanagi and Izanami were the last primordial gods that created and shaped the world. The details of their relationship are tragic: Izanami died during childbirth, and in a fiery rage, he killed the son she birthed. Izanagi decided to trek to Yomi, the underworld where the dead resides, and retrieve his wife.

Unfortunately, by the time he reached her, Izanami had eaten food cooked in the underground furnace, trapping her in the underworld. Izanagi grew impatient once he was told this, and lit a fire to see his wife, only to find her covered in maggots and rot. He ran, and she chased. Izanagi barely managed to escape only to have his former wife turned enemy vow to end one thousand lives a day. The story mirrors Hiroki's journey into Yomi just as Izanagi did, but with possibly better results.

Trek To Yomi is not a happy experience for anyone inside the game. Aside from the first few minutes of chapter one, you are essentially in a downward spiral of pain and death. The same can be said of its citizens as well.

On your journey to protect Kamikawamura, the neighboring town over from Hiroki's, you find a lost love letter that details the grim story of a working-class young man in love with a girl whose father owns some land, giving them status. Hiroki notes that perhaps the doomed couple were better off in Yomi, instead of the woman being married off to someone of higher status by her father. This also gives a slight look into Hiroki's mindset as things unravel around him.

Hidden among the collectibles you find strewn throughout your journey, you can hear Hiroki's thoughts about the situation surrounding him. Each collectible that represents or discusses a god, Hiroki tries to blame each of them for not protecting the villages from the hellish torment that is happening all around him.

For instance, the innocuous fishing rod you find in chapter three tells the sad story of Ebisu, Izanami and Izanagi's first child, who suffered abandonment at the hands of his parents. Hiroki feels a kinship with Ebisu in a way because he feels as if his entire village had been abandoned similarly. Considering the horror you face as you press on, you can't blame him.

6 The Cards Of The Yokai

Karuta cards, a game in which you capture your opponent's cards, can be found all over chapter four, in the aftermath of your decision to leave your town unguarded. Each yokai represented on the card mirrors a part (or lacking part) of Hiroki.

Onyudo, for example, is claimed to have extreme perseverance and assisted humans during harvesting season, something Hiroki feels he's lost himself. Another example would be Hiroki comparing himself with the demon Ushi-Oni, who is infamous for poisoning villages and making them rot. Small tokens like this serve to flesh out Hiroki as a character better inside the confines of a straightforward narrative such as this game. 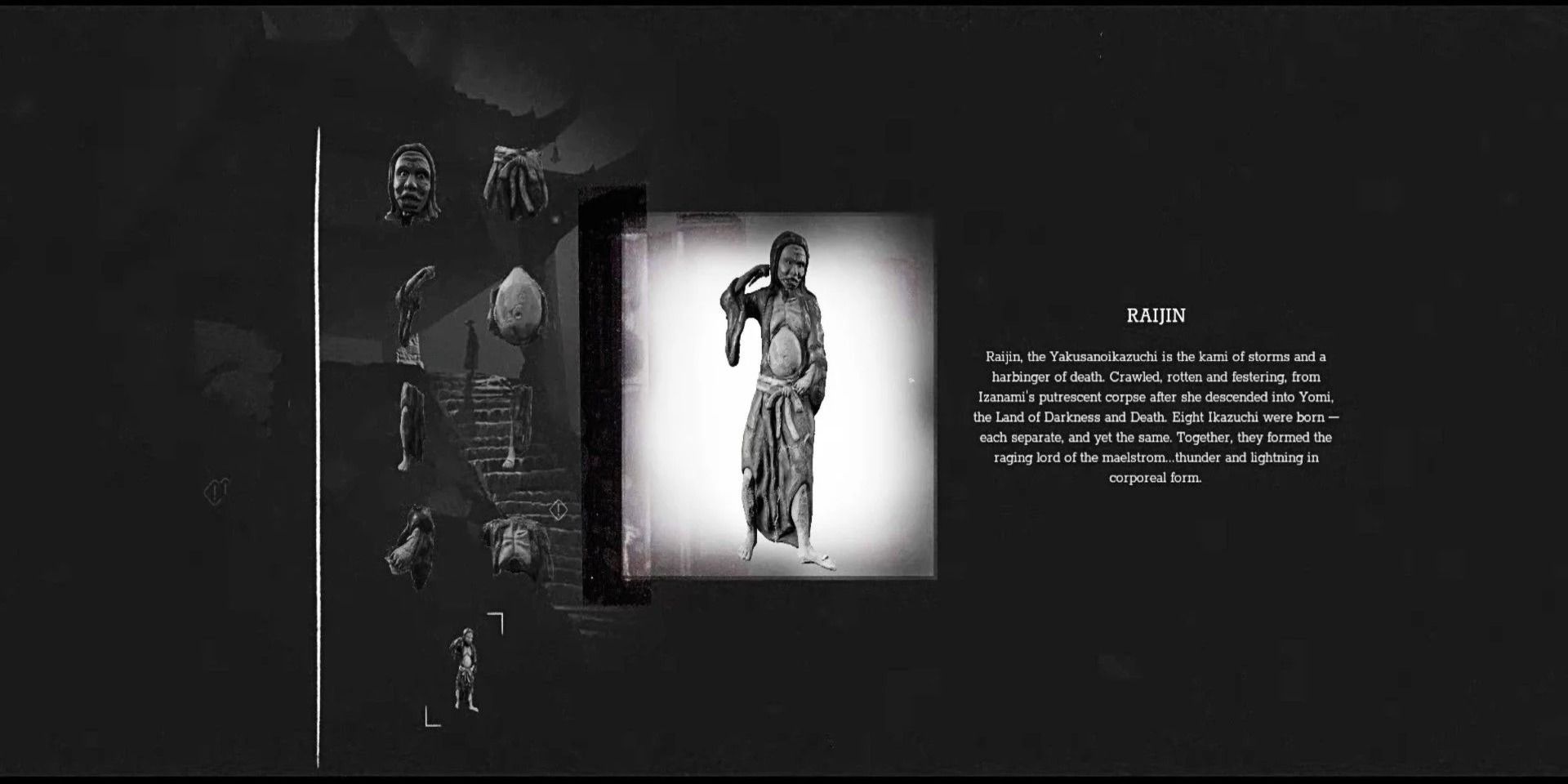 The tale of Izanami is tragic, but it doesn't end at her death. Her corpse was cursed with deep rage and resentment, and it birthed eight furious spirits that were the embodiment of these feelings. Once her face was revealed to Izanagi, she sends them underworld women to end him.

Each of the thunder gods represents a different aspect of lightning and thunder, with the head representing the Master of Storms, while the right hand represents the rumbling you might feel on the ground before lightning strikes. Izanami's rage is powerful, quick, and deadly to anyone within striking range. Despite that, each piece comes together to create Raijin, her final child and lightning incarnate. 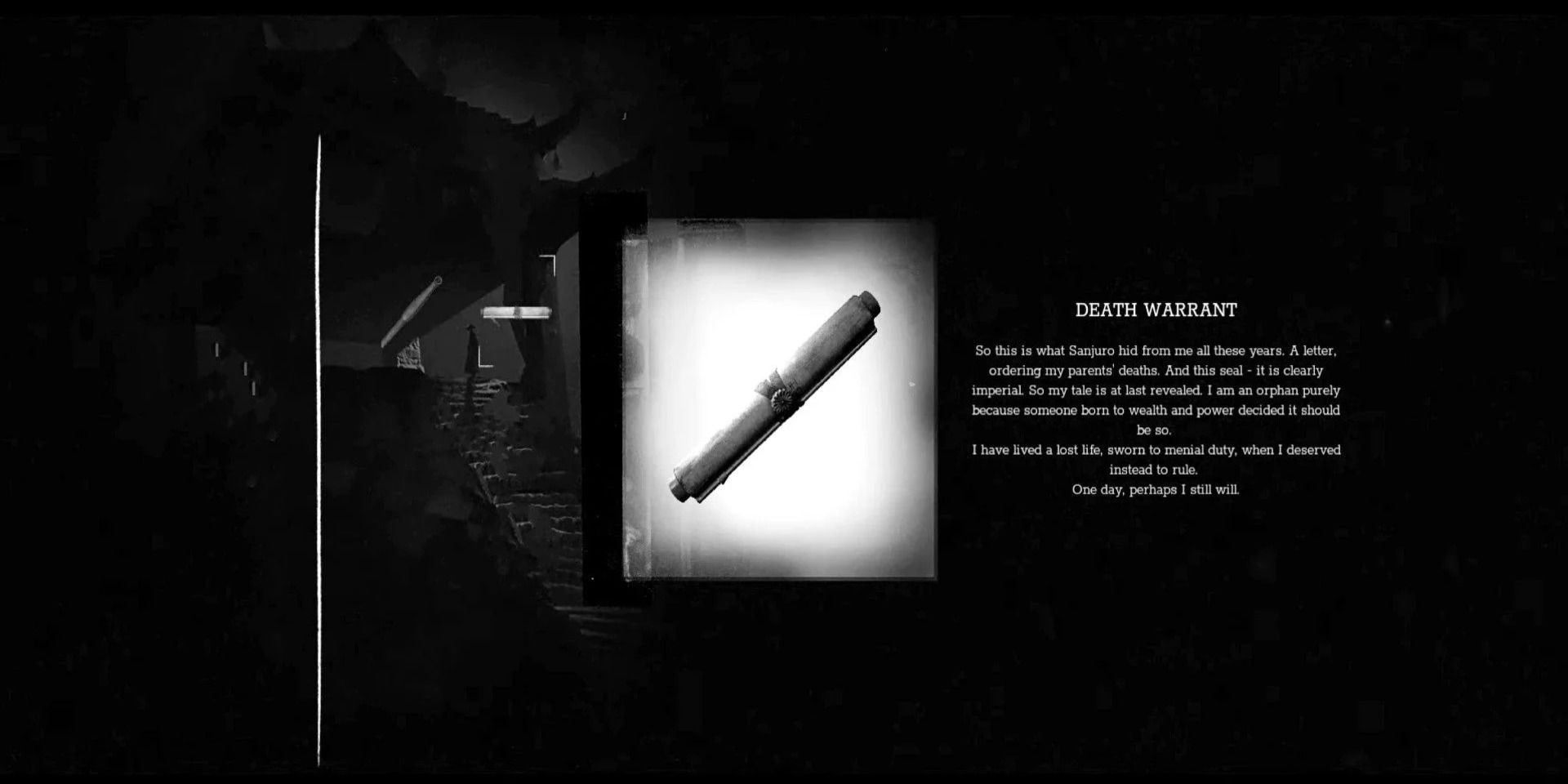 Somewhere along the line, the glory took the place of duty in Hiroki's mind. Not only was it due to his decision to help a neighboring village instead of protecting his own, but once he found out that he was of royal blood, he grasped the notion that he could still become a ruler — despite the absolute carnage surrounding him.

It's a small, passing thought he has during his trek into the underworld, but there it is, slowly spreading its roots in Hiroki's heart. Somewhere before the start of the game, he lost sight of what he promised to his Sensei.

Some certain NPCs and enemies allude to Hiroki being less than honorable. One could chalk it up to Yomi causing mass confusion and hallucinations. However, there is one spot in chapter four, when you are heading toward the torii gate, where Hiroki states that he recognizes all the specter's faces and says that he's murdered them all.

Throughout the story, we never get a sense of malice and evil intent from him, only honor, duty, or love. So, it's more than a little alarming to find out that what Hiroki says is at least partially true. By the journey's end, we don't get any answers or closure to that secret part of Hiroki's past, and that's okay.

The warlord who returned from Yomi. His past is unknown, and his present is nothing but blood and plague. Is conquest his true goal or was it personal? He had planned out a devastating attack on the village not once, but twice. Maybe the first time was coincidental, but that second attack had undeniable malice, coupled with how he specifically lured Hiroki and his men away from home just to catch the village at its most vulnerable. Kagerou also waited on Hiroki, almost as if he knew he would return from his death to face him again. It was also Kagerou who went on a trip to Yomi, so it's possible that he knew that he would face Hiroki again.

Probably one of the biggest plot lines you can miss is Hiroki's journey itself. After all, you're the one who traveled with Hiroki to the depths of the underworld completely tailored to him, so of course, you experienced his failures and ultimately, his successes in reaching his goals.

This, however, is only part of his tale. You see, all the traveling and fighting to the torii gate was Hiroki's battle between consciousness and death at the end of chapter three. A dream. This is best personified by his final battle in Yomi: a fight against himself. What we are witnessing is the personification of Hiroki's battling wills in which the final decision will be based on your input. This is not exactly the 'it was all a dream' cop-out some shows and movies do, but a balance between subtle and overt storytelling.