There may well be an excessive amount of lovable Pokemon from the 900 and counting that have been introduced since the first pair of games launched in 1996. However, from the ever-expanding roster of critters there are quite a few that trainers should never touch, no matter what.

These dangerous creatures are capable of causing psychological trauma, physical injury, severe poisoning, paralysis, or in a few cases, even death. Trainers should approach these Pokemon with an extreme abundance of caution, and for some species, trainers shouldn't even attempt to approach them at all due to their life-threatening abilities. 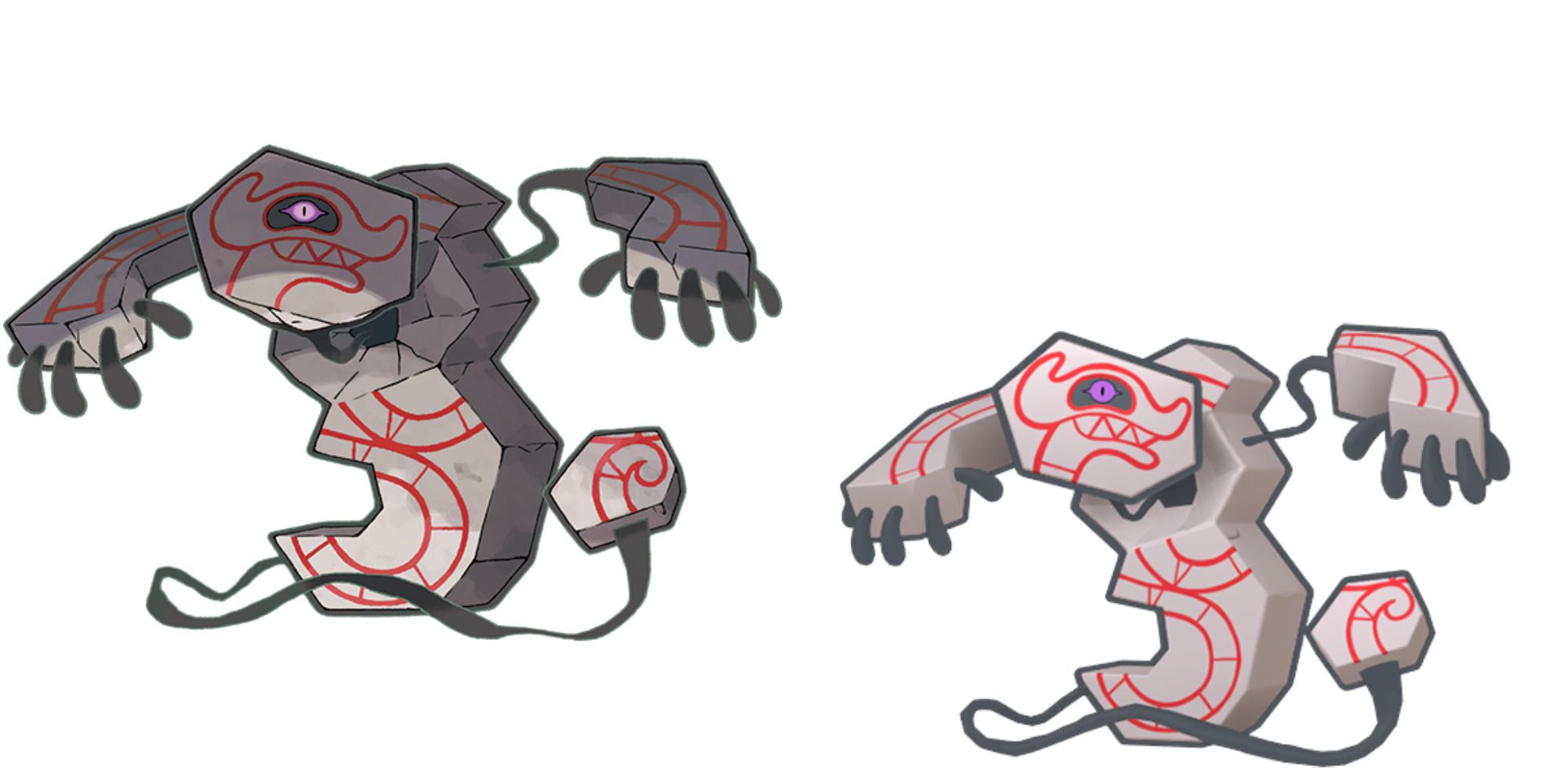 Runerigus, the Grudge Pokemon, is a Ground and Ghost dual-type Pokemon introduced in the eighth generation Pokemon games, Sword and Shield, and is the evolved form of Galarian Yamask.

According to Runerigus' Pokedex entry in Pokemon Shield, touching its body will cause the individual to see horrific memories connected to the pictures on its body. Touching any Ghost-type Pokemon is probably a bad idea, but the effect of touching Runerigus's body is relatively minimal compared to what some other Ghost-type Pokemon are capable of. 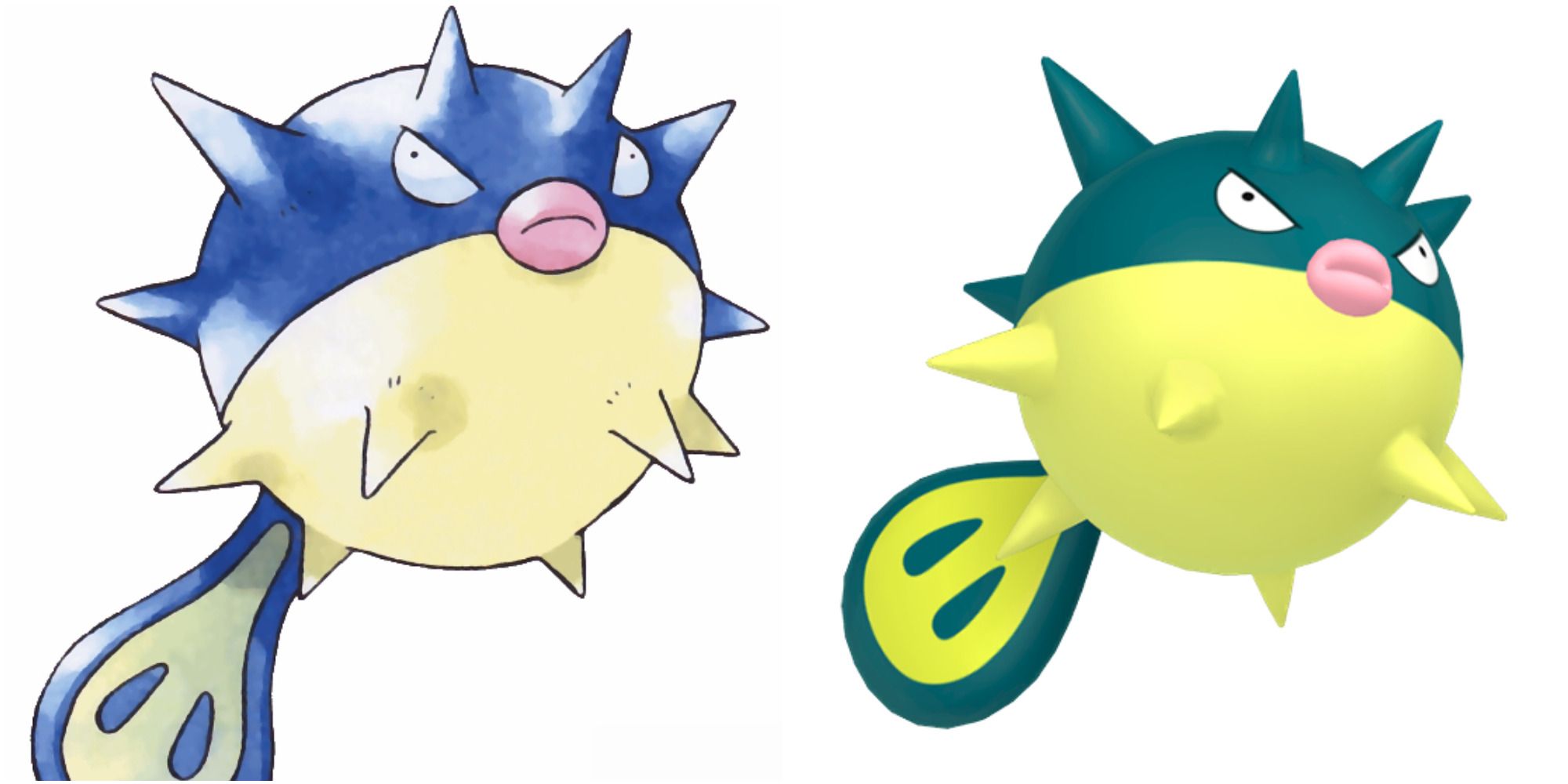 Qwilfish, the Balloon Pokemon, is a Water and Poison dual-type Pokemon introduced in the second generation Pokemon games, Gold and Silver.

Qwilfish's spikes inject a poison capable of causing a person to faint. One would think they would be fine being close to it. as long as they don't touch it, but Qwilfish can also shoot the spikes on its body in every direction — meaning it's best to not get anywhere near. Its Hisuian counterpart and evolved form, Overqwil, still should not be touched. It usually sprays poison from its spikes, rather than the spikes themselves, although they are still capable of it. 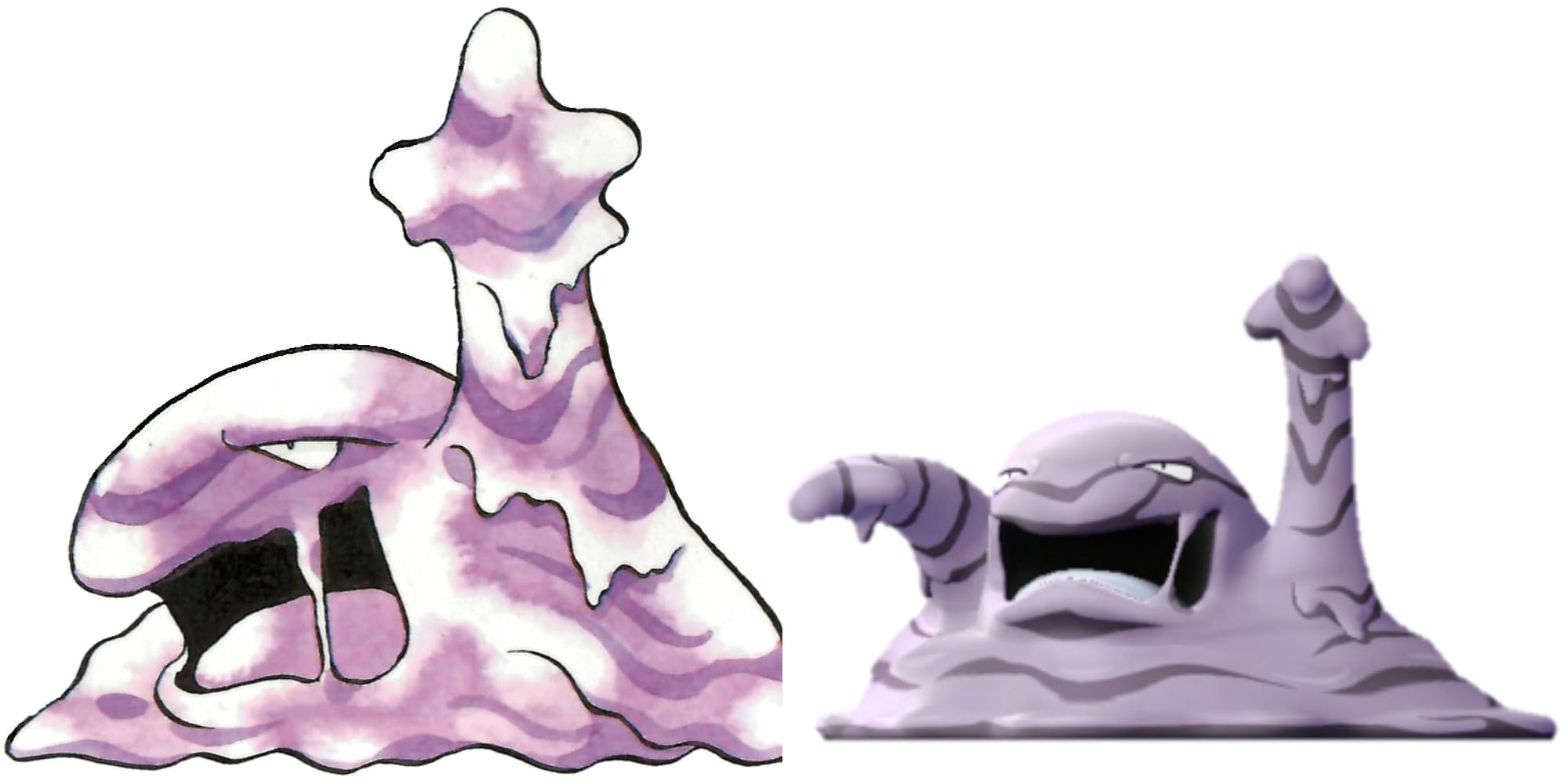 Muk, the Sludge Pokemon, is a pure Poison-type Pokemon introduced in the first generation Pokemon games, Red and Blue, and is the evolved form of Grimer. As a large living pile of toxic sludge, any plant it touches will die immediately, and even plants in close proximity may die as well. Touching Muk can cause severe poisoning, and while it somehow doesn't seem to be fatal, it will cause an intense fever that requires several days of bed rest.

Unlike what is shown with Ash's Muk in the anime series, an overly affectionate Muk can be dangerous, particularly to people around Professor Oak's age. 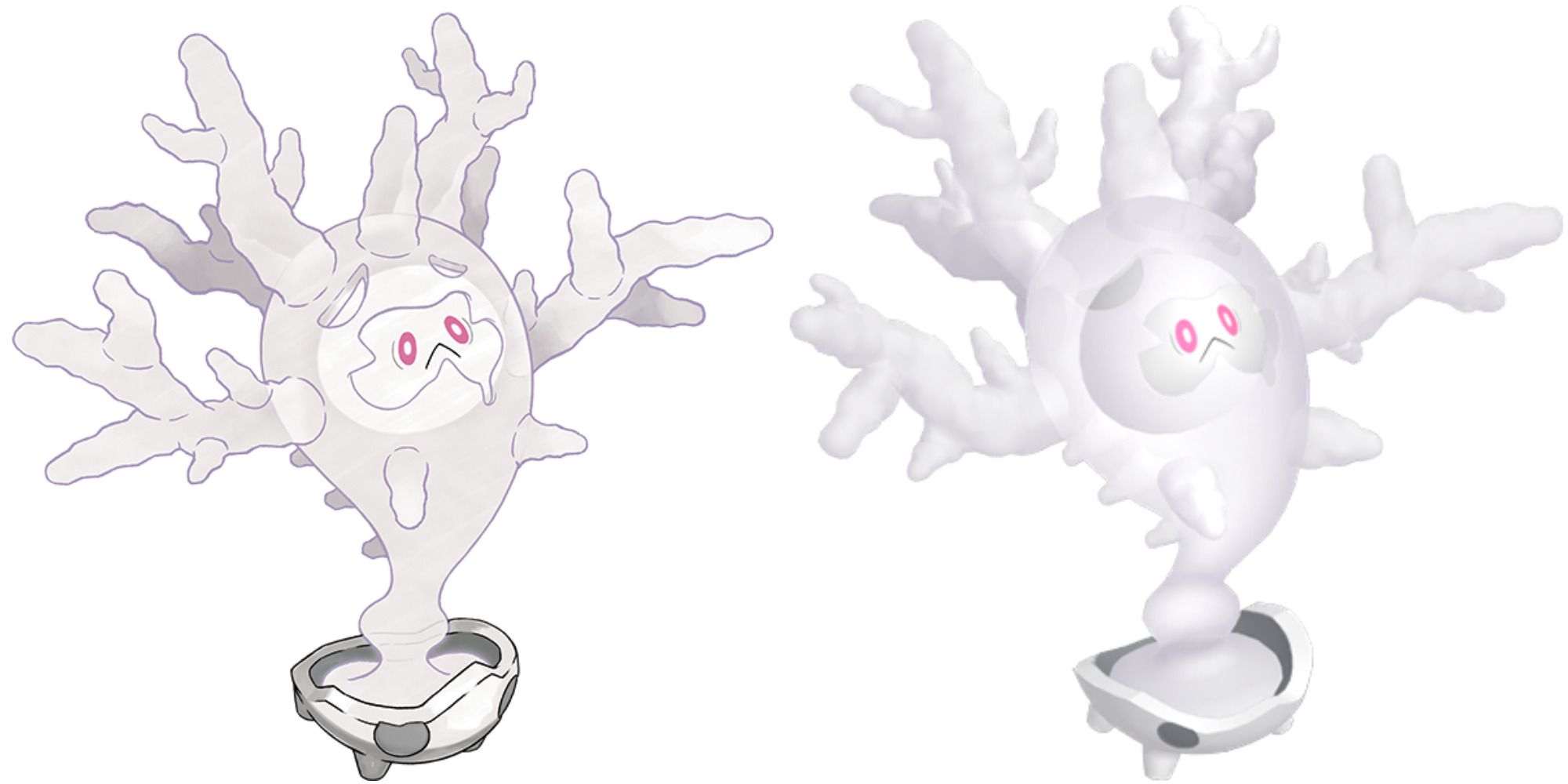 Cursola, the evolved form of Galarian Corsola, was introduced in the eighth generation Pokemon games and drops the Water-typing of Johtonian Corsola to become a pure Ghost-type Pokemon.

According to its Pokedex entry in Pokemon Shield, its ectoplasmic body will cause anyone who touches it to become "stiff as a stone." It's currently unknown whether this stiffening is temporary or permanent, or whether it can be cured easily, but it's probably best not to touch Cursola in general. It is also said that Cursola's pre-evolved form can curse individuals who come near it, so Cursola is likely capable of doing such as well. 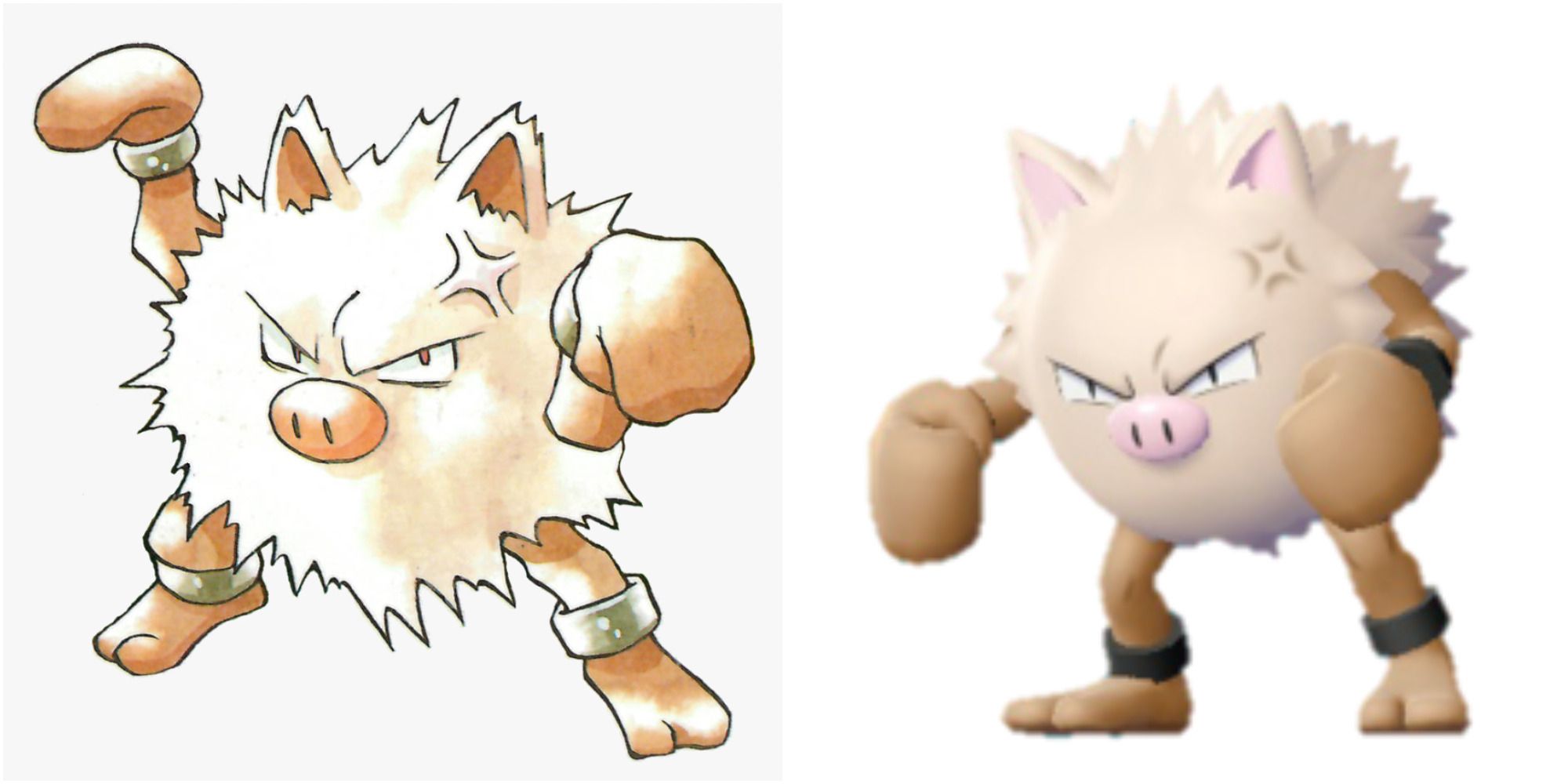 The Pig Monkey Pokemon Primeape is a pure Fighting-type Pokemon. It's the evolved form of Mankey, introduced in the first generation Pokemon games, and is a bit different from the other Pokemon featured here. While Primeape isn't poisonous and doesn't have an extreme body temperature that's harmful to other nearby creatures, it does become angry if someone approaches it or even just looks at it.

Primeape's anger cannot be quelled, and it will chase whatever or whoever angered it until it has caught them, becoming even angrier if the victim runs. Primeape will then beat them up until they've become completely immobile. 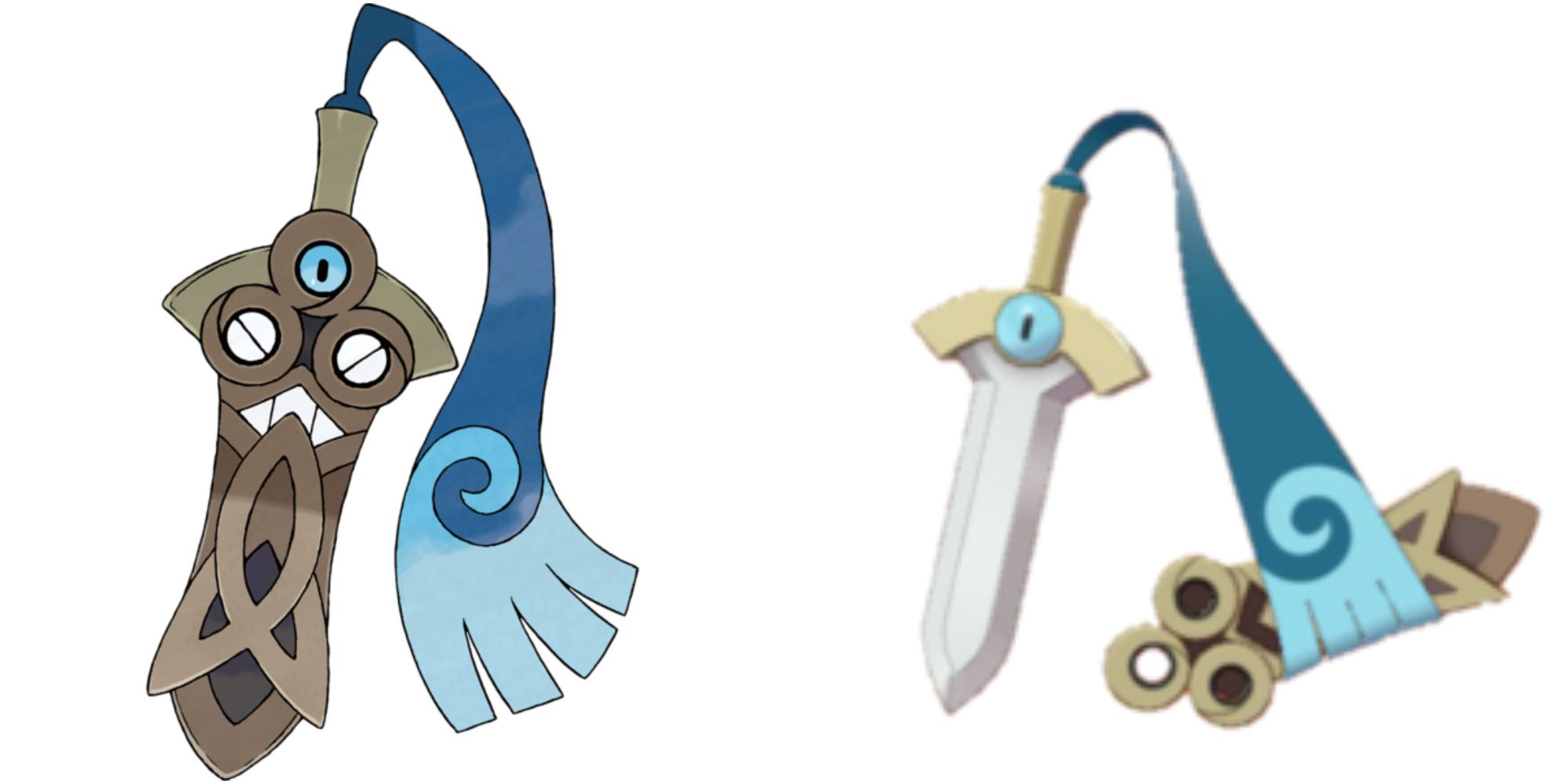 Honedge is a Steel and Ghost dual-type Pokemon introduced in the sixth generation games, X and Y. According to several Pokedex entries, anyone who grabs Honedge's hilt will be drained of their entire life force once it wraps its blue cloth around their arm.

While Honedge's evolved forms, Doublade and Aegislash, don't have sapping life energy mentioned in their Pokedex entries, they're likely still capable of it. They still have Honedge's cloth, which changes color from blue to pink to black and purple as Honedge evolves. Honedge just provides another reason why it's dangerous to play with swords. 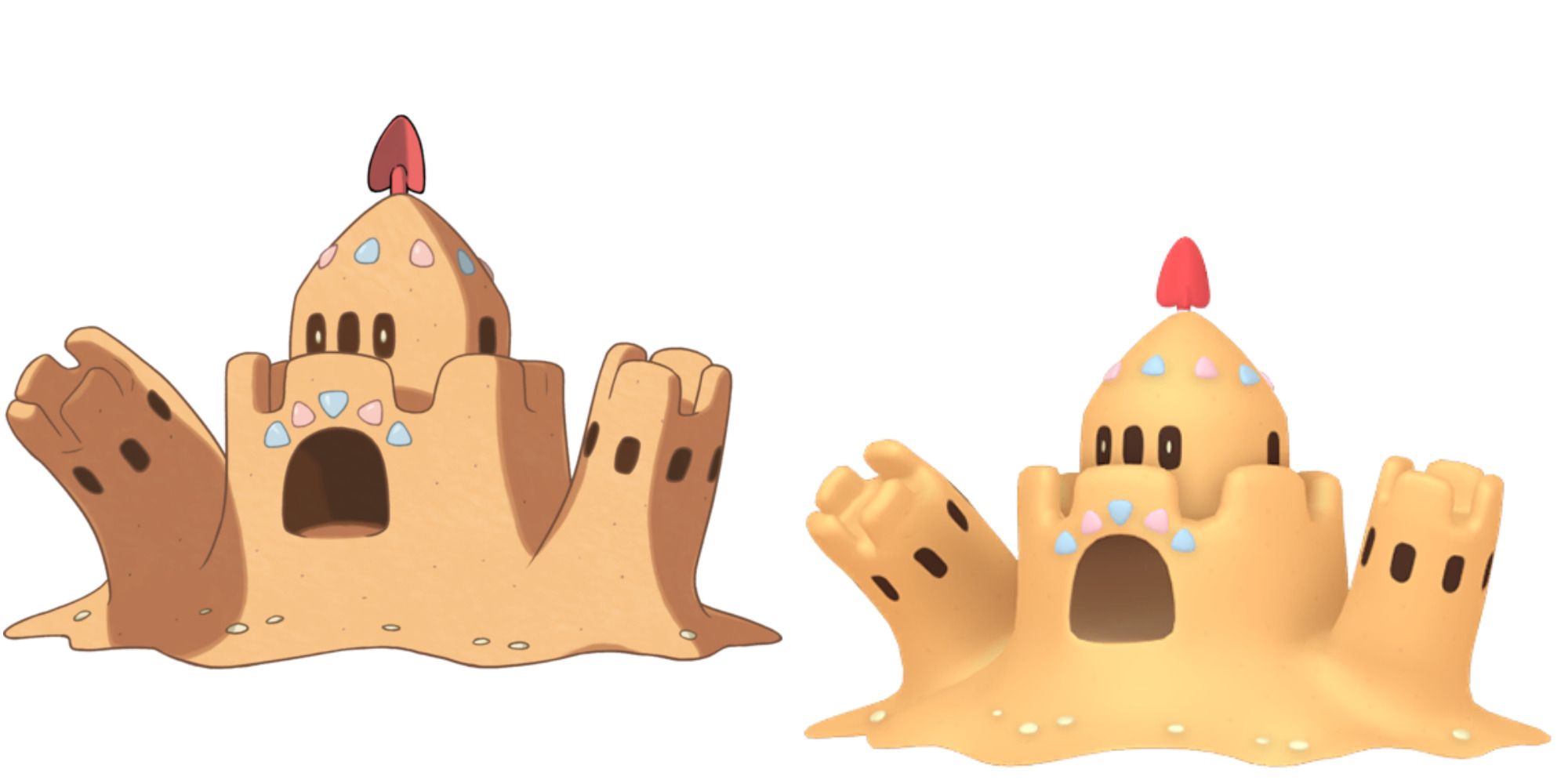 Palossand, the Sand Castle Pokemon, is a dual Ghost and Ground-type Pokemon and the evolution of Sandygast, both first introduced in the seventh generation games, Sun and Moon.

Palossand is also known as the "Beach Nightmare", and can suck the life out of any creature that comes near. However, it prefers to prey on smaller Pokemon. What makes Palossand even creepier is that each grain of sand has a will of its own, and like other Ghost-type Pokemon, it is still capable of possessing people. Who's to say it wouldn't possess people to devour their life force for nourishment? 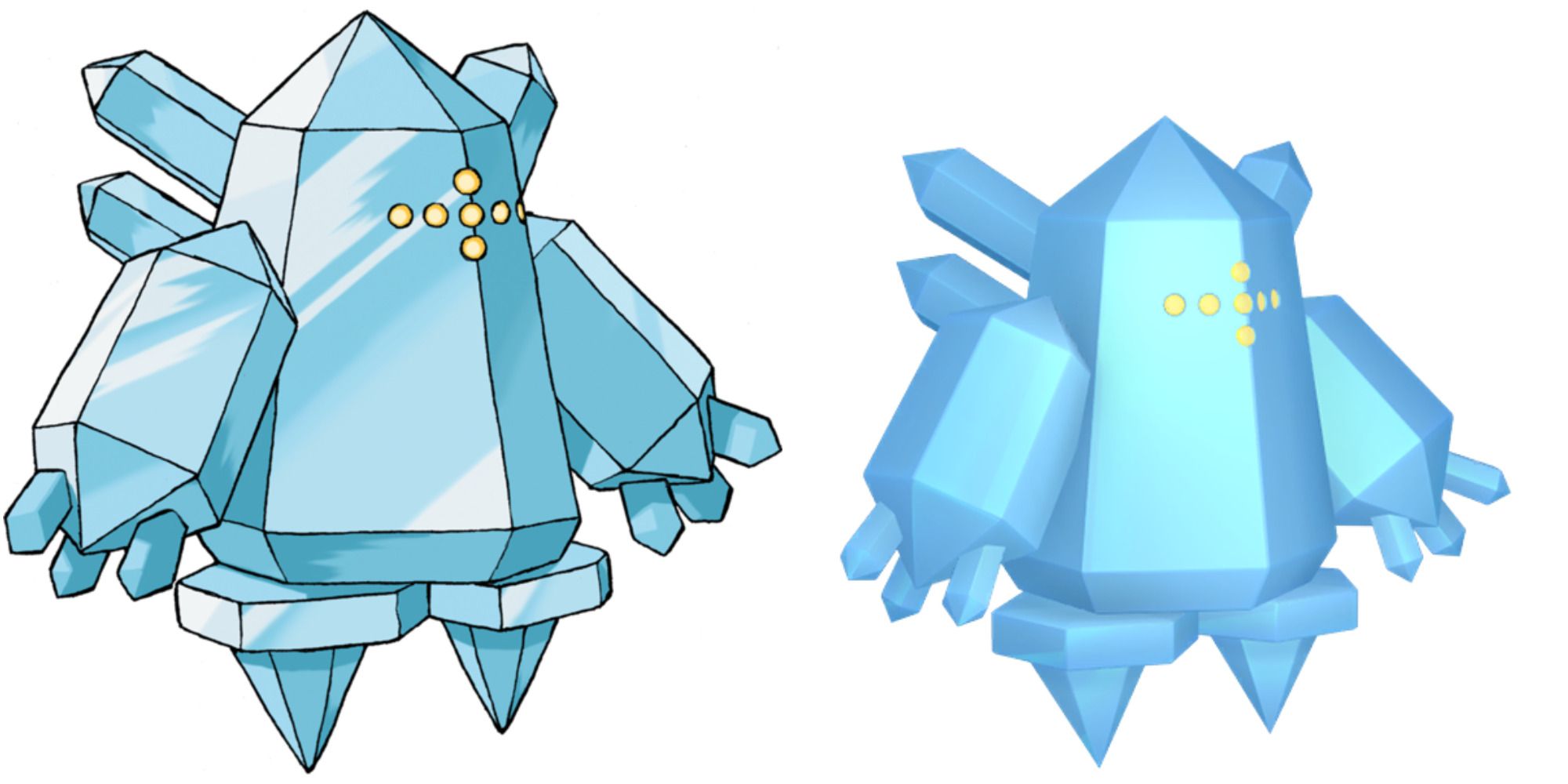 Regice, the Iceberg Pokemon, is an Ice-type legendary Pokemon introduced in the third generation games, Ruby and Sapphire, and is one of the five legendary titans. However, it was originally one of only three.

Regice's body is made of Antarctic ice from the ice age, and is so cold that even magma cannot melt it. Regice also surrounds itself with air that's -328 degrees Fahrenheit, which will cause anything close enough to it to freeze. While a Pokemon like Vannilluxe might give a trainer severe brain freeze, touching Regice is like someone sticking their tongue to frozen metal, only it's more likely to cause death. 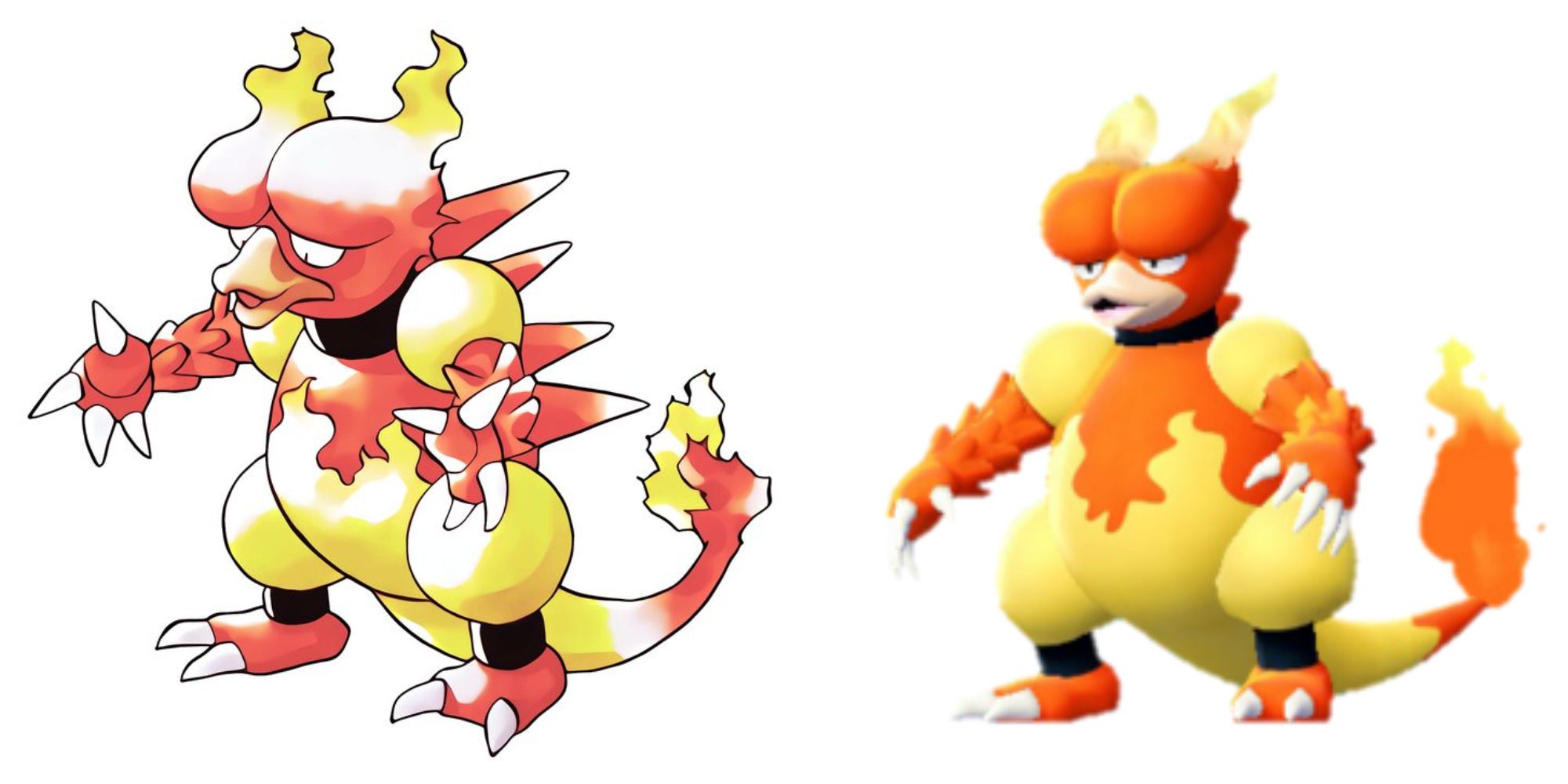 Luckily, Magmar live near volcanoes and aren't usually seen wandering around other habitats, so they aren't constantly destroying nature simply by existing. Magmar's evolved form, Magmortar, has a body temperature of up to 3,500 F, but only when it takes a deep breath. Its natural temperature is unknown. 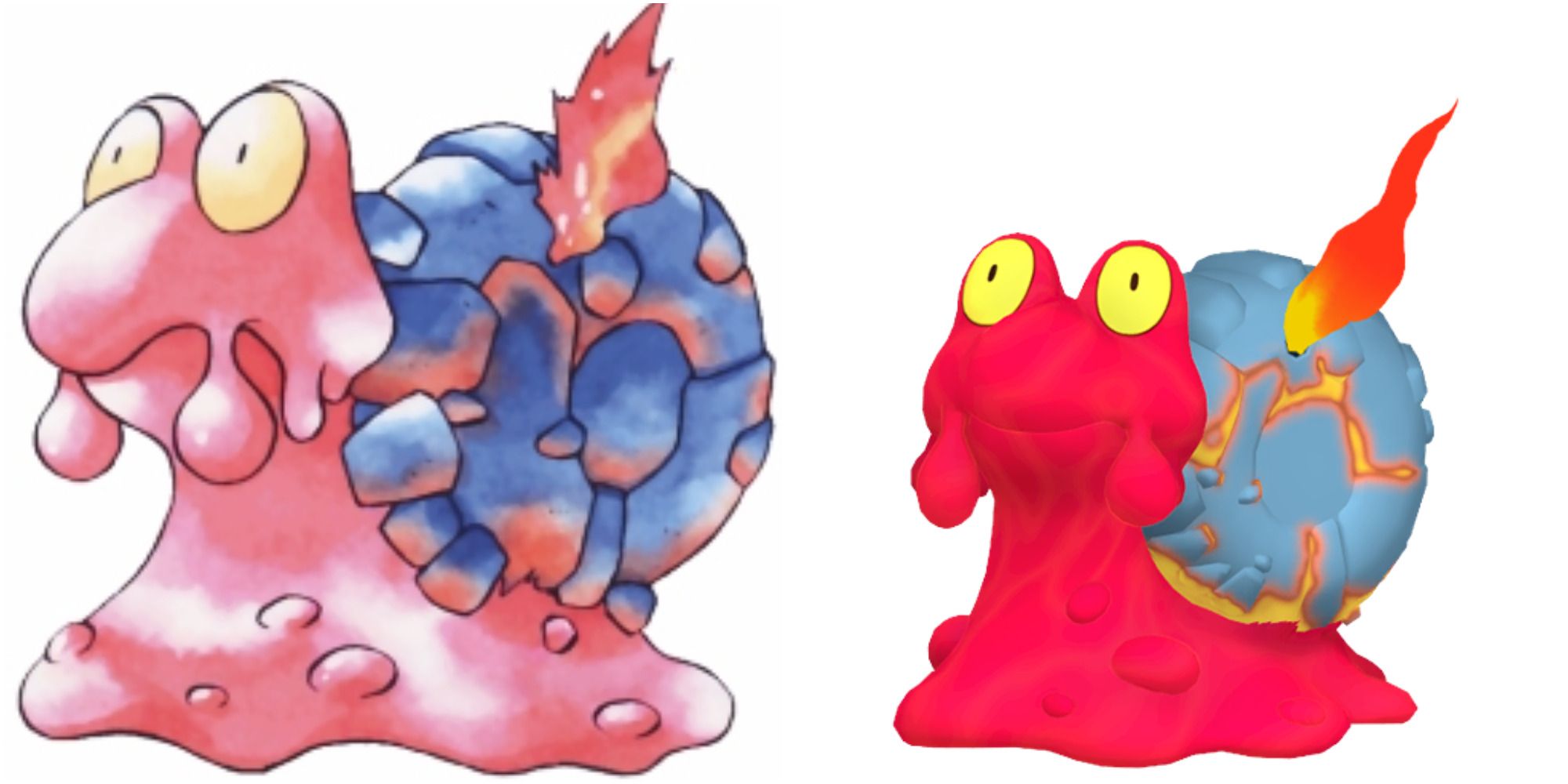 Magcargo is a dual Fire and Rock-type Pokemon introduced in the second generation Pokemon games. According to the Pokedex, Magcargo's natural body temperature is 18,000 F, much hotter than any other Fire-type Pokemon currently in existence.

Unlike its previous form, Slugma, whose body will harden if the area it's residing in is too cool, Magcargo has a shell made of hardened magma. This shell is brittle and breaks easily due to its body temperature, so Magcargo might as well not even have it. Magcargo may be a snail, but its extreme body temperature will warn trainers long before it gets near them.