Pokemon starters and star athletes: they have more in common than you may think. It's always been fun to compare athletes to successful people in other fields, but strangely, no one has made that jump to do it with Pokemon.

Several attempts at that very activity were made in the entries below, looking at a Pokemon's physical makeup, stats, design concept, and/or notable PokeDex entries with the intent of finding a matching athlete. There might be better matches than others, with some starters having distinct design inspirations that relate directly to a certain sport, some matching the specific skills of a certain athlete, and some just having the same color scheme as a certain sports team. Either way, making these comparisons was fun, and hopefully, you see the connections hinted at between these Pokemon-to-athlete pairings. 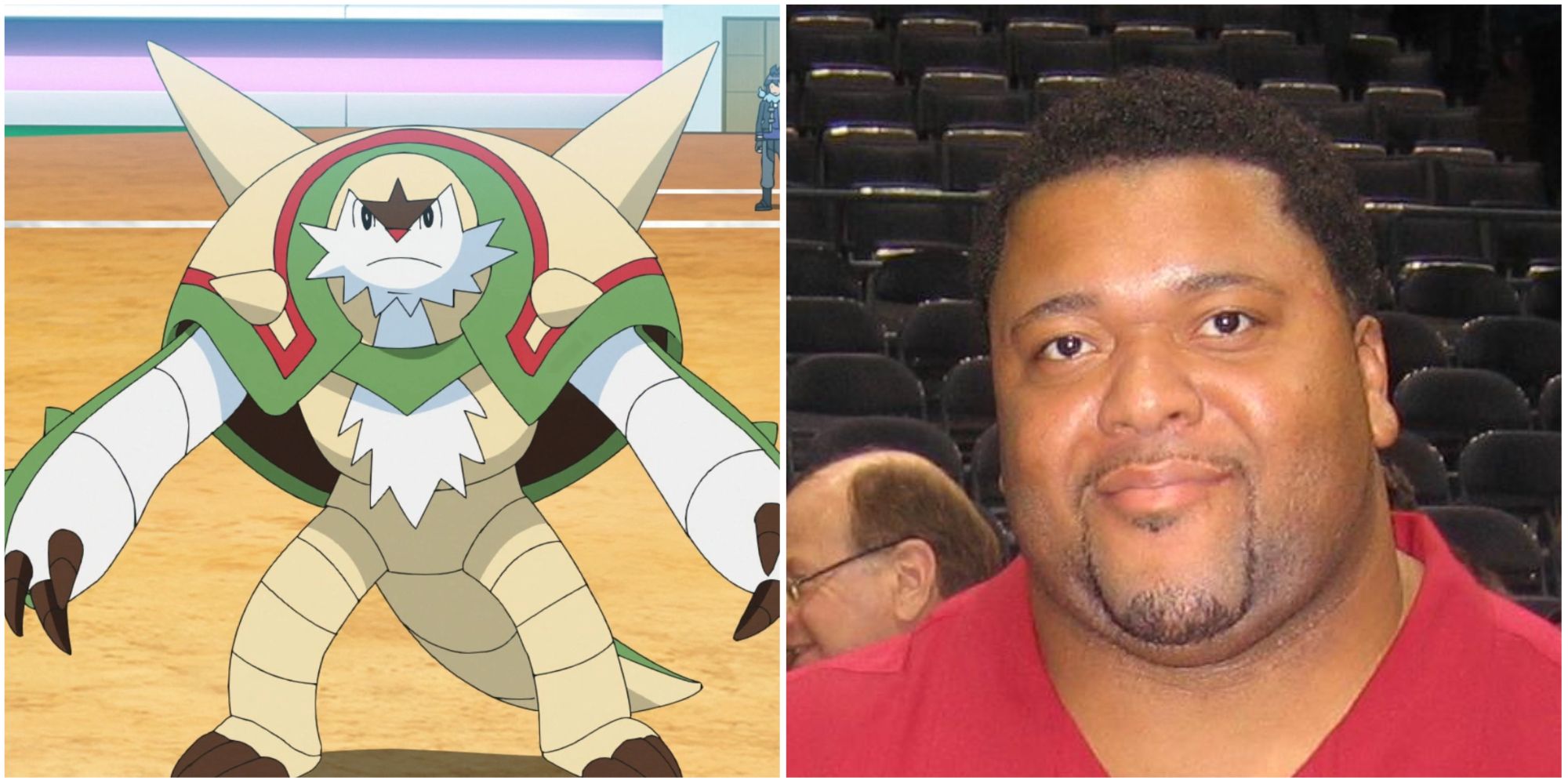 Chesnaught may be more explicitly inspired by the warrior class in role-playing games, but Chesnaught just looks like a football player. To be specific, its design, PokeDex entries, and high 122 Defense have the makings for a great defensive tackle. One of those PokeDex entries, fittingly enough, says its Tackle could flip over a 50-ton tank. All things considered, the all-time great Green Bay Packer, Gilbert Brown, fits best.

To match Chesnaught’s bulk, Brown was one of the biggest players of his day, peaking at a whopping 355 pounds. Brown’s defensive capabilities on the gridiron were just as comparable, as he led a Packers defensive unit that allowed just 19 touchdowns in 1996. 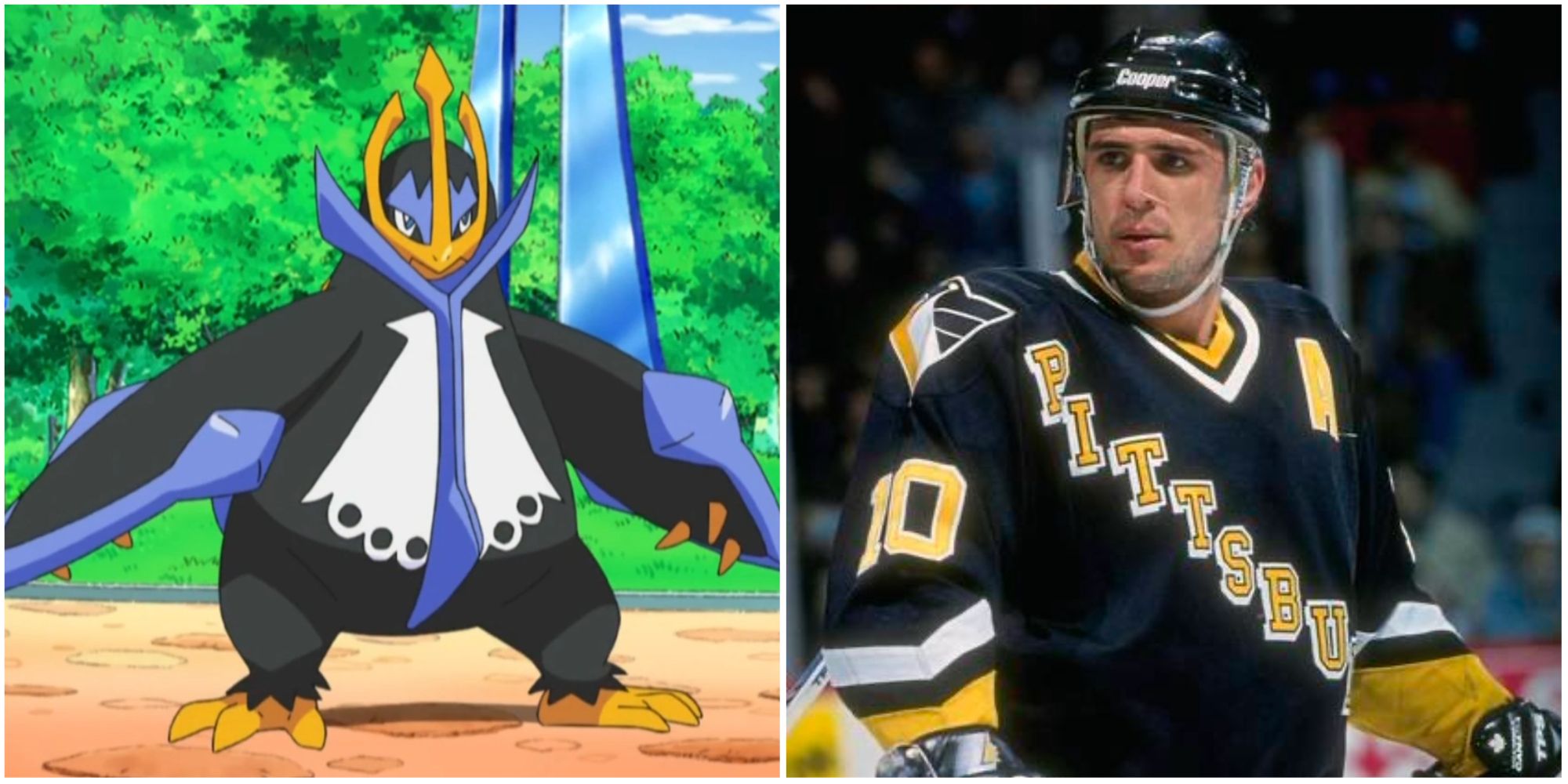 With Empoleon being based on a penguin, there’s one obvious connection to make: the NHL’s Pittsburgh Penguins. It’s a welcome coincidence that most hockey players are French-Canadian, with Empoleon being inspired by Napoleon Bonaparte, the notorious French emperor.

All the above attributes and Empoleon's all-around competitive capabilities could lead you to Ron Francis, the Ontarian centre most known for his time with the Penguins. While he wasn’t the superstar his teammate Mario Lemieux was, he was still an elite two-way forward, winning the 1994-95 Selke trophy, leading the NHL in assists twice, and doing all the little things that helped the Penguins win two Stanley Cups. 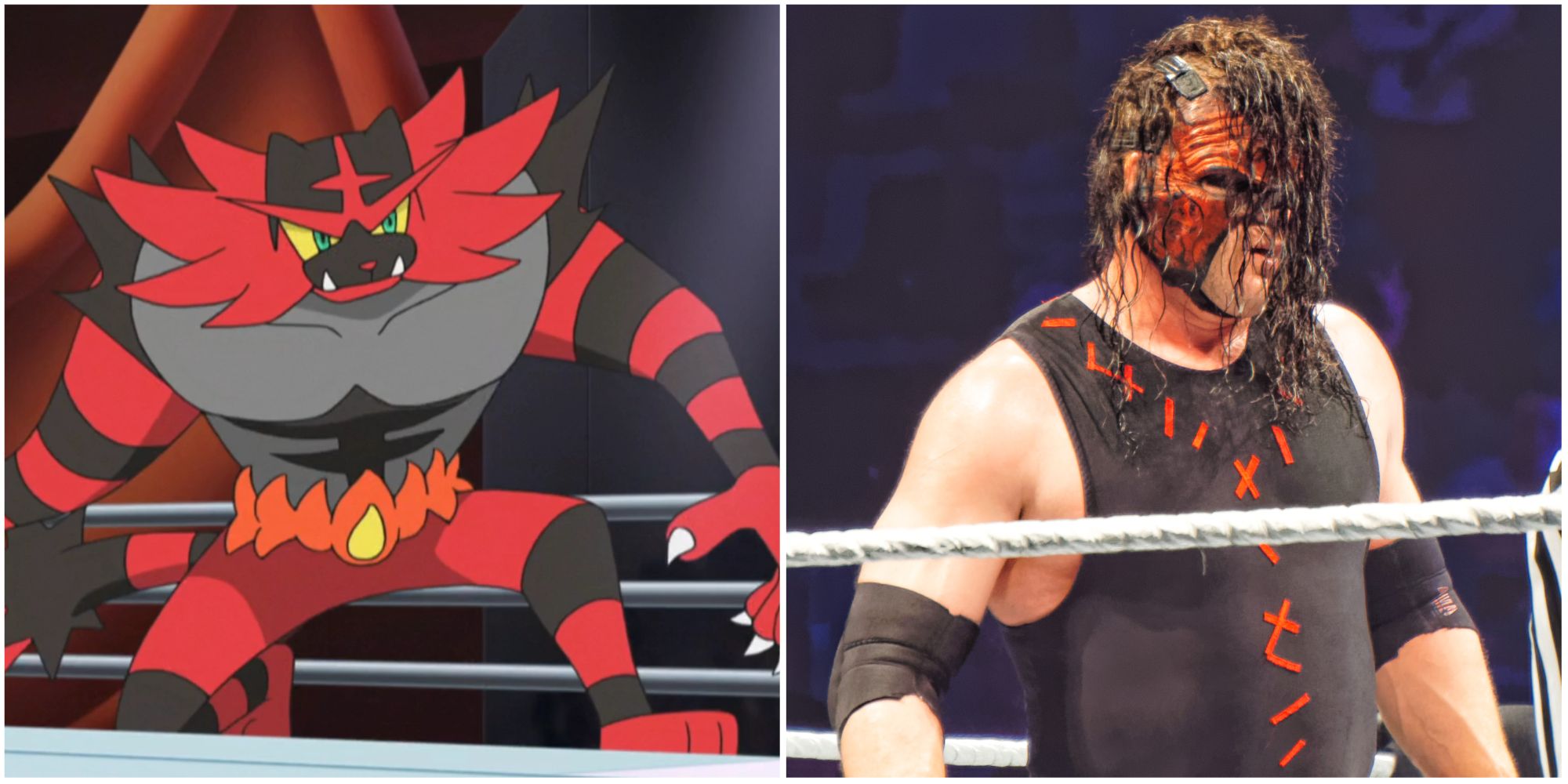 Y’all knew Incineroar was gonna be a wrestler. To be specific, Incineroar’s whole design concept is based on the wrestling heel. Wrestling history has seen many great heels, so most of them would match Incineroar pretty well. There is, of course, this one wrestling heel that – get this – had his entire gimmick based around fire for a while.

Kane, of course, is more than his arsonist-from-hell gimmick, with multiple championships and records to his name. But this just makes so much sense. It’s not like Incineroar’s a slouch, either; it dominates VGC everywhere it goes. Kane also packed pretty good clotheslines himself to match Incineroar’s Darkest Lariat. 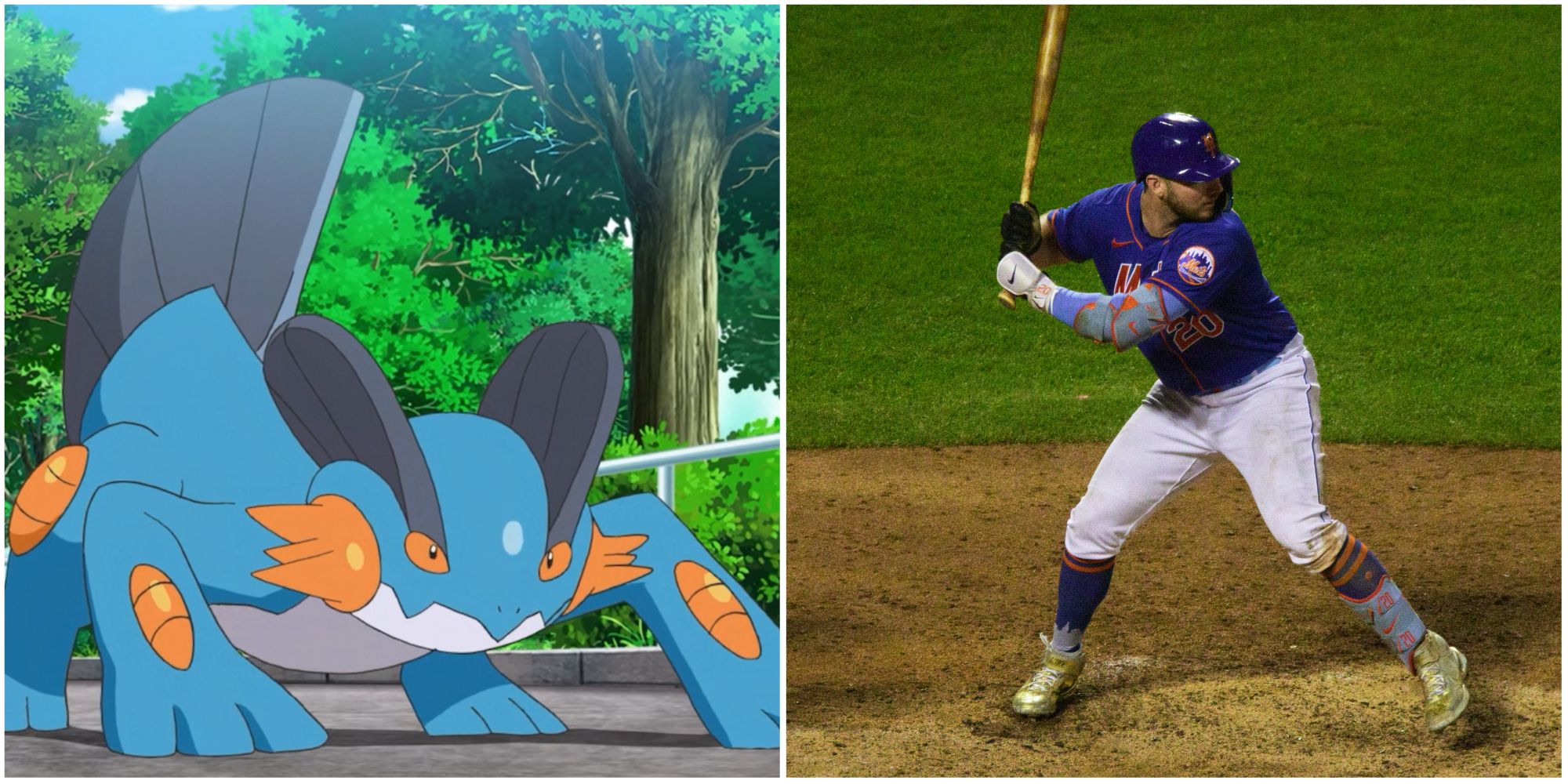 Swampert would make a great baseball player. Those guns are great for swinging a bat, and those hands make a great makeshift glove. If you take its color scheme into account, a closer look at Swampert’s stats shows it has an uncanny resemblance to the New York Mets’ star first baseman, Pete Alonso.

Alonso is one of the MLB’s best sluggers in 2022, leading the National League in runs batted in and landing pretty high up there for home runs, while Swampert’s best stat is its Attack at 110. Their relative weaknesses line up, too: Alonso is an about-average fielder and below-average baserunner, and Swampert has about-average defensive stats and below-average Speed. 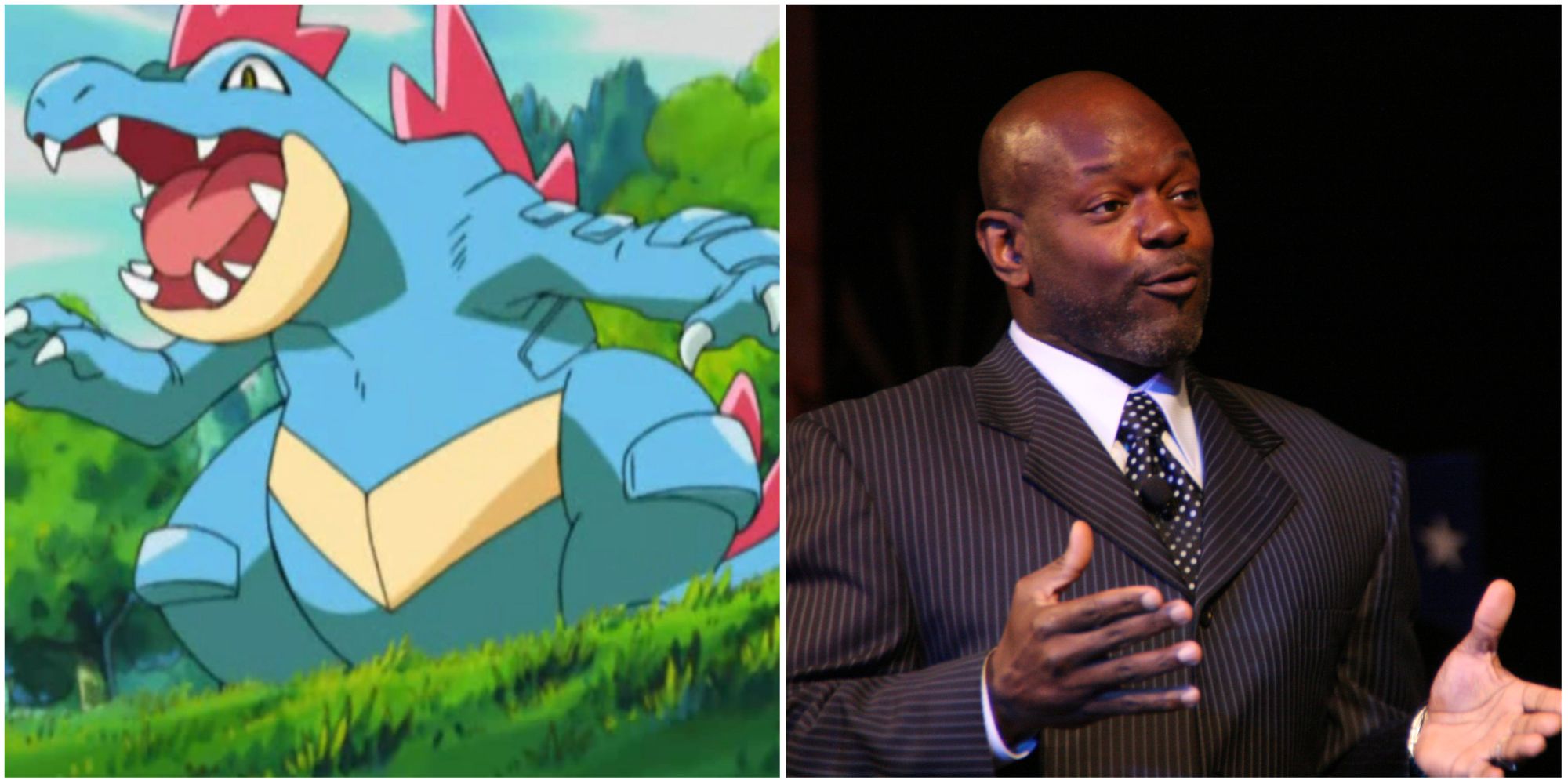 Gator chomp! There’s a college sports team out there that fits perfectly with Feraligatr, being the University of Florida’s Gators. One Florida Gator that carved out a fantastic career for himself and fits decently with Feraligatr is Emmitt Smith, former running back for the Dallas Cowboys and all-time leader in rushing yards.

Smith was truly one of the best power backs of his time; he could run over even the most bruising defenses, and he didn’t necessarily do it with blinding quickness. Yeah, Feraligatr would make a superb power back. It was literally designed with shoulder pads, and it has the bulky body and relative Speed to make it work. 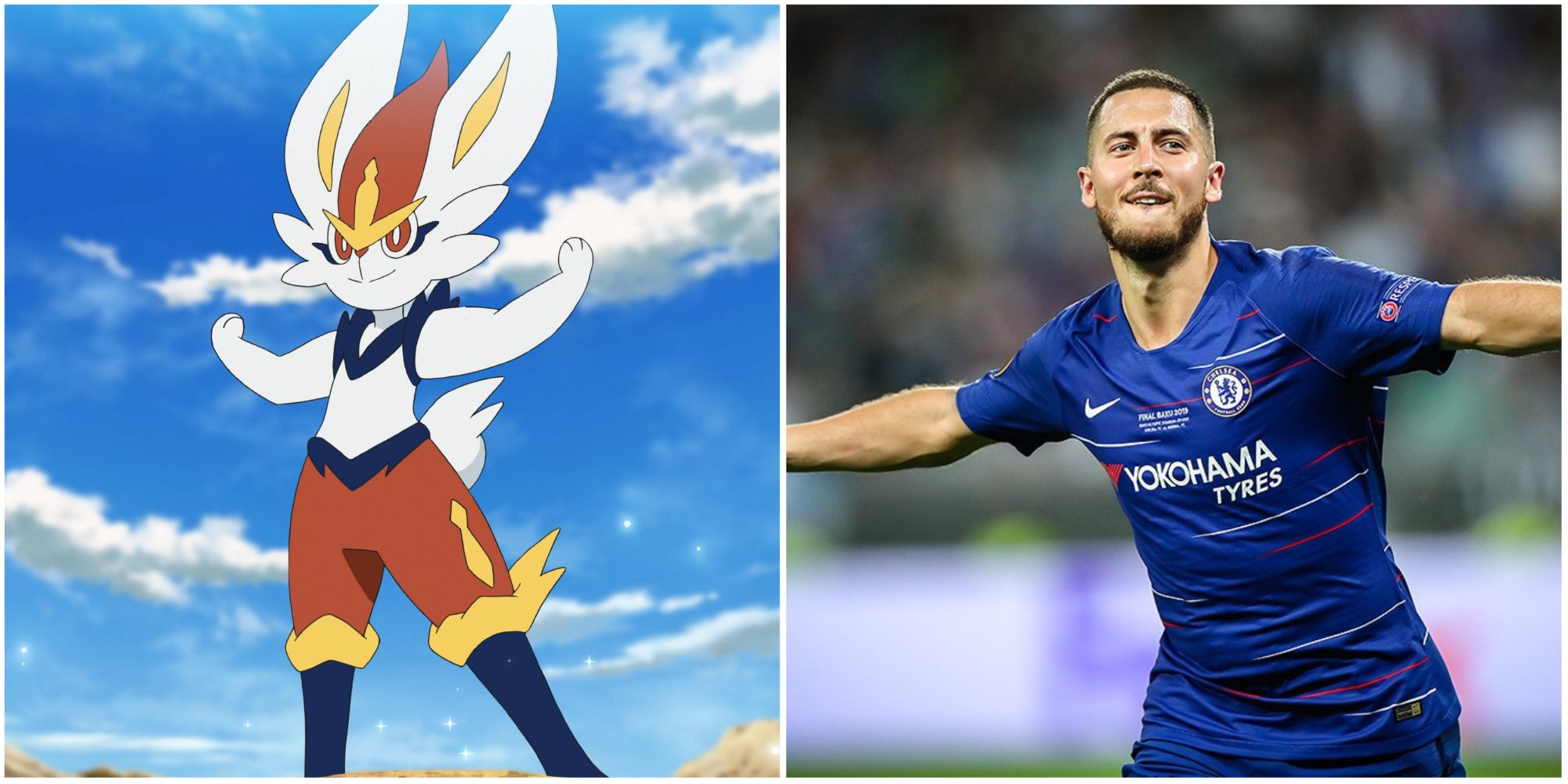 Here’s another obvious one: Cinderace is a football player. You could honestly pick some random English player, but a closer look shows a strong resemblance to Real Madrid’s Eden Hazard. Hazard isn’t English, but he was once the face of an elite English club, winning the Premier League a few times with Chelsea.

Their abilities are comparable, too. Hazard is a winger known for his pace and overall offensive prowess, and Cinderace boasts high Attack and Speed stats and a wide movepool. Cinderace also has a signature move called Court Change, which transfers over field effects like Stealth Rock and Spikes, also known as…entry hazards. As a little bonus, Cinderace rocks those Belgium colors pretty nicely. 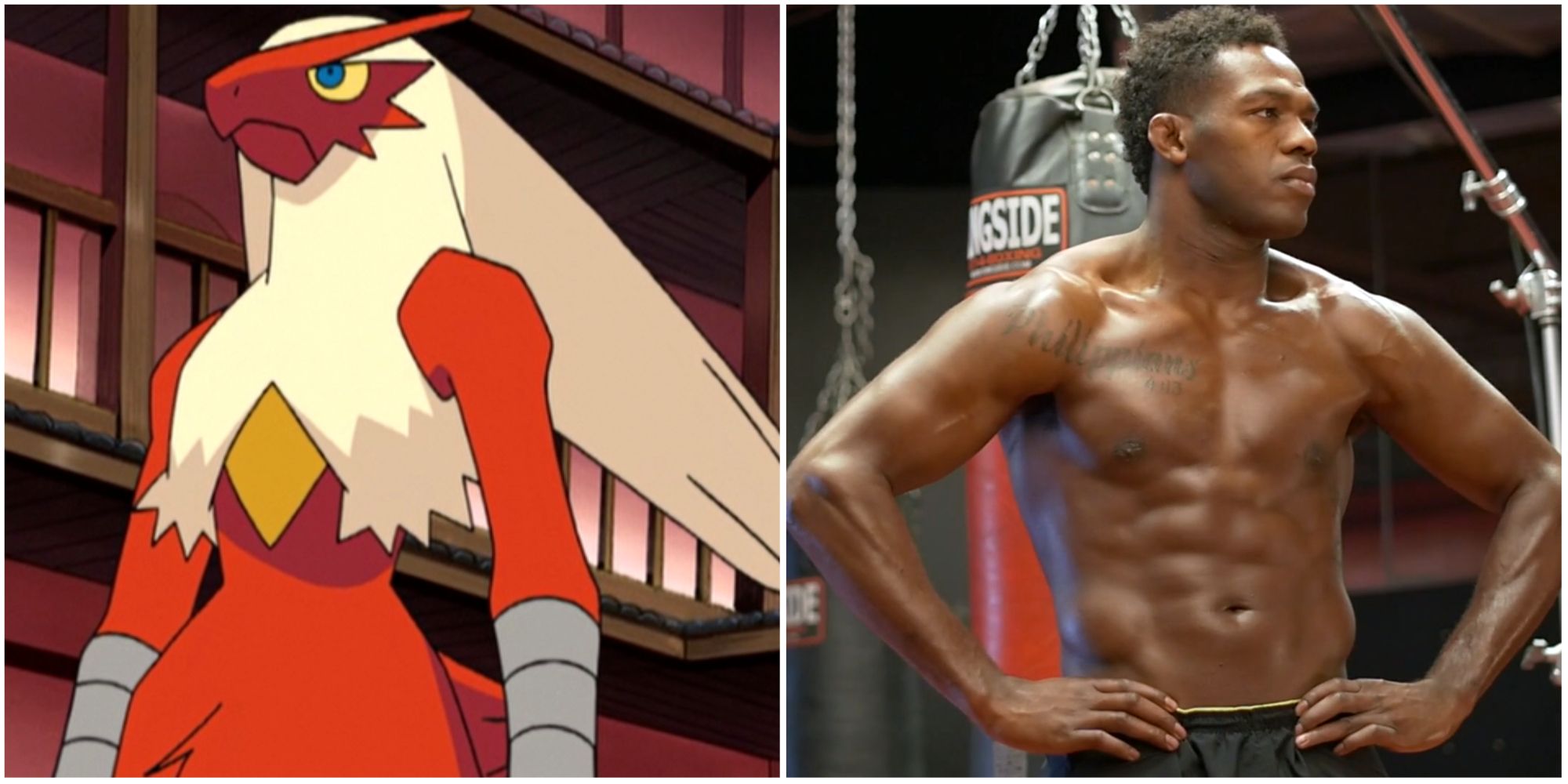 Blaziken, being one of the more multifaceted physical fighters of the starter bunch, would absolutely dominate any MMA promotion. Considering the specifics, though, Blaziken arguably matches up best with Jon Jones, physical build and all.

Doping violations aside, Jones stands as one of the most feared and most popular fighters in the octagon, and that’s largely thanks to his kick repertoire, arguably the best in MMA history. Blaziken, of course, once had Blaze Kick as a signature move and is noted in the PokeDex as having strong legs great for executing kicks. Neither are absolute specialists, though. Jones is one of the most adaptable and creative strikers in the game, and Blaziken packs a wide movepool and near-equal Attack (120) and Special Attack (110). 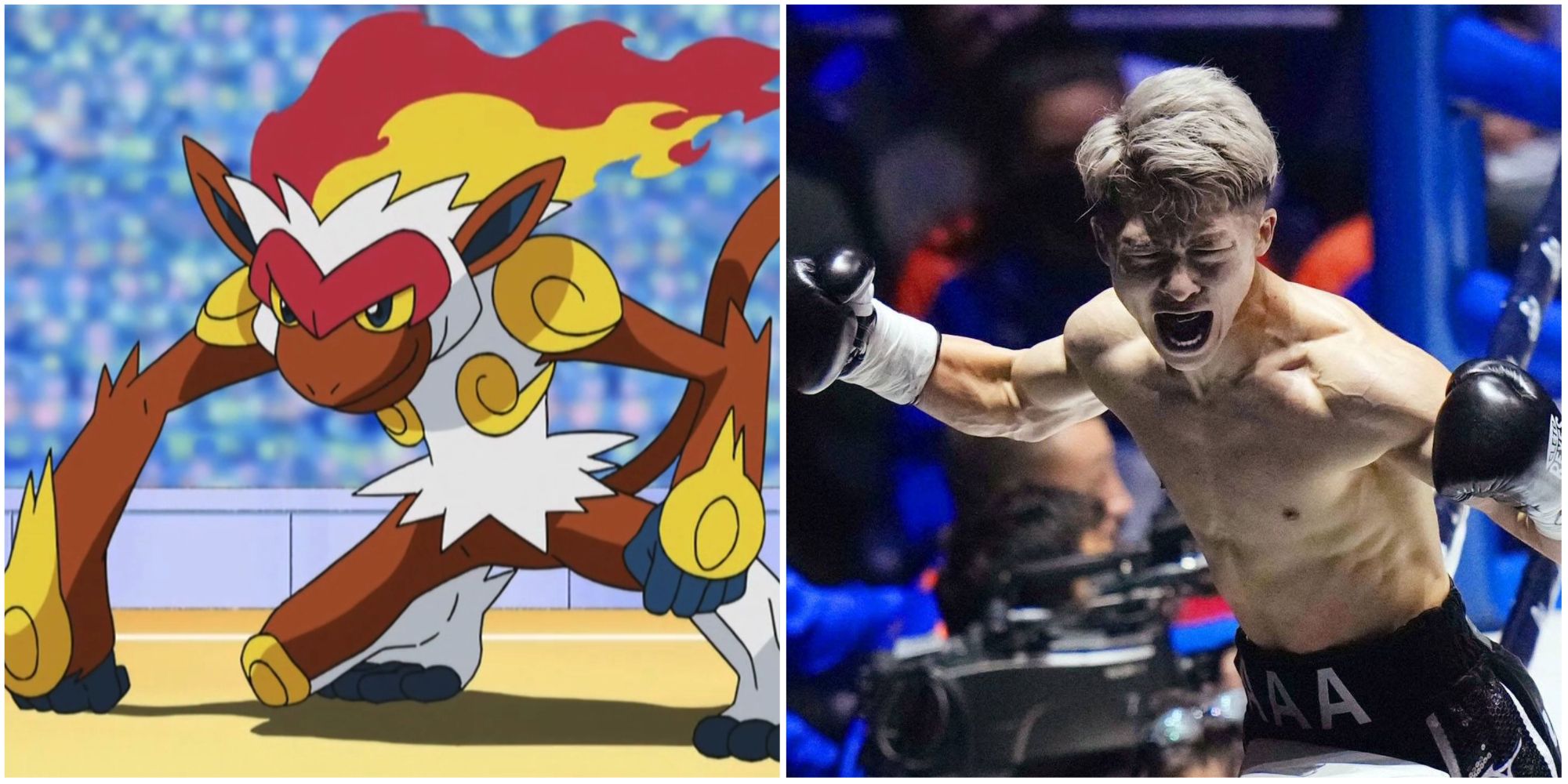 To continue the connection between Fire/Fighting-type starters and combat sports, Infernape has Iron Fist as a hidden ability and multiple punching moves in its repertoire, so it pairs best with a boxer. Infernape isn’t quite a bantamweight, going a few pounds over the official range, but it still pairs well enough with the Japanese bantamweight phenom, Naoya Inoue.

Inoue is easily the most notable in his division for his explosive knockout punching, which Infernape can easily stand up to. But like Infernape, Inoue also has as wide a punching repertoire as you’d want. His body shots, uppercuts, hooks, and straights pack equal amounts of power. He can execute all those punches with lightning quickness, too, not unlike the 108 Speed Infernape executing a Mach Punch. 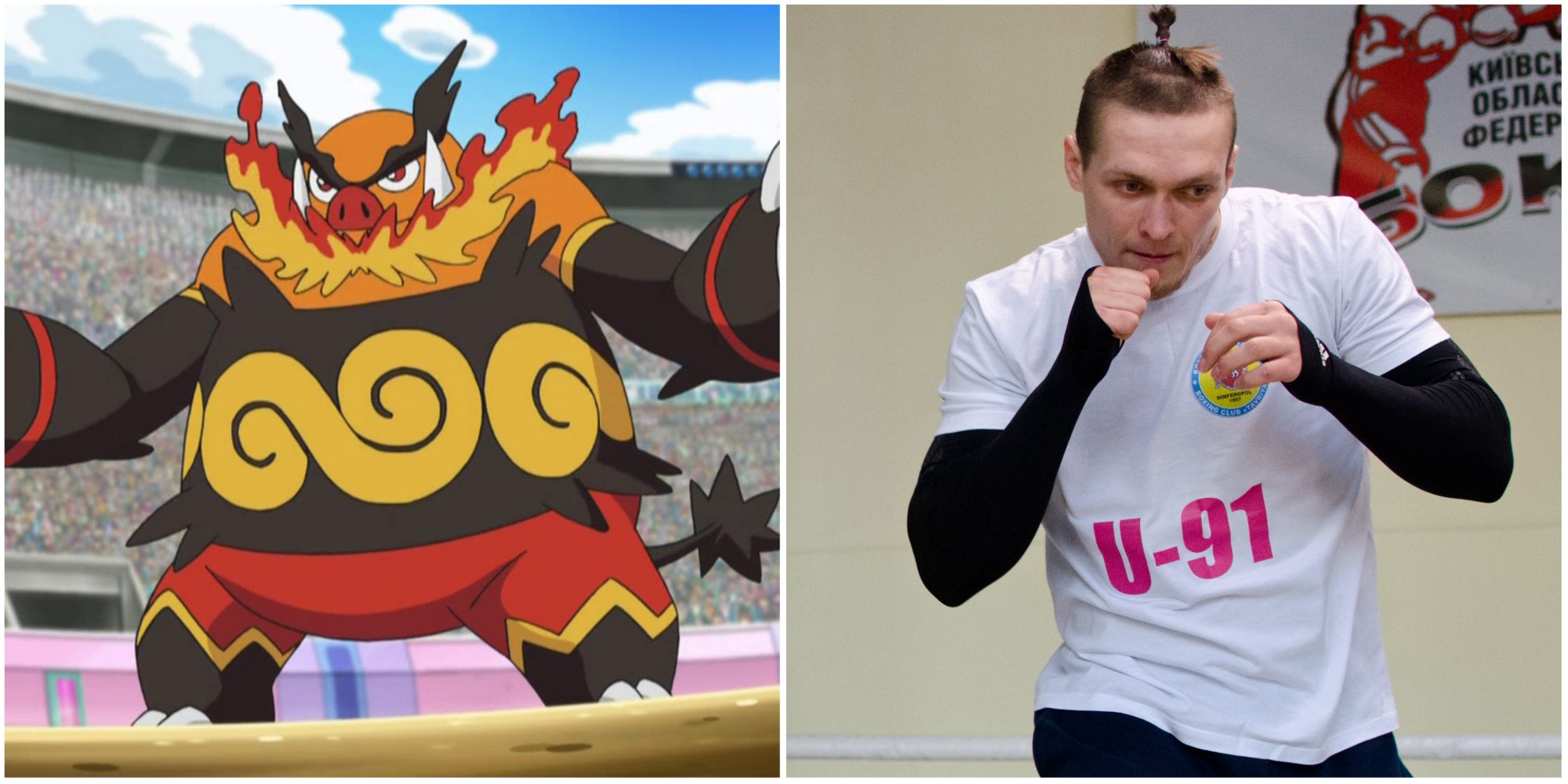 Like Infernape, Emboar similarly wields punches that could put you to sleep and give you third-degree burns for good measure. Despite the difference in build and what its Speed stat will tell you, Emboar is also noted in the PokeDex for having a similar talent of executing attacks quickly.

In contrast to Infernape and the so-far undefeated bantamweight Inoue, Emboar is represented by the so-far undefeated heavyweight, Oleksandr Usyk. Despite his status as a heavyweight, Usyk is one of the more mobile fighters in his division. His most notable skill, though, remains his punching volume, using his jab to apply pressure and create openings for more hits. He’s not completely absent of power, though, earning 13 of his 20 wins via knockout. 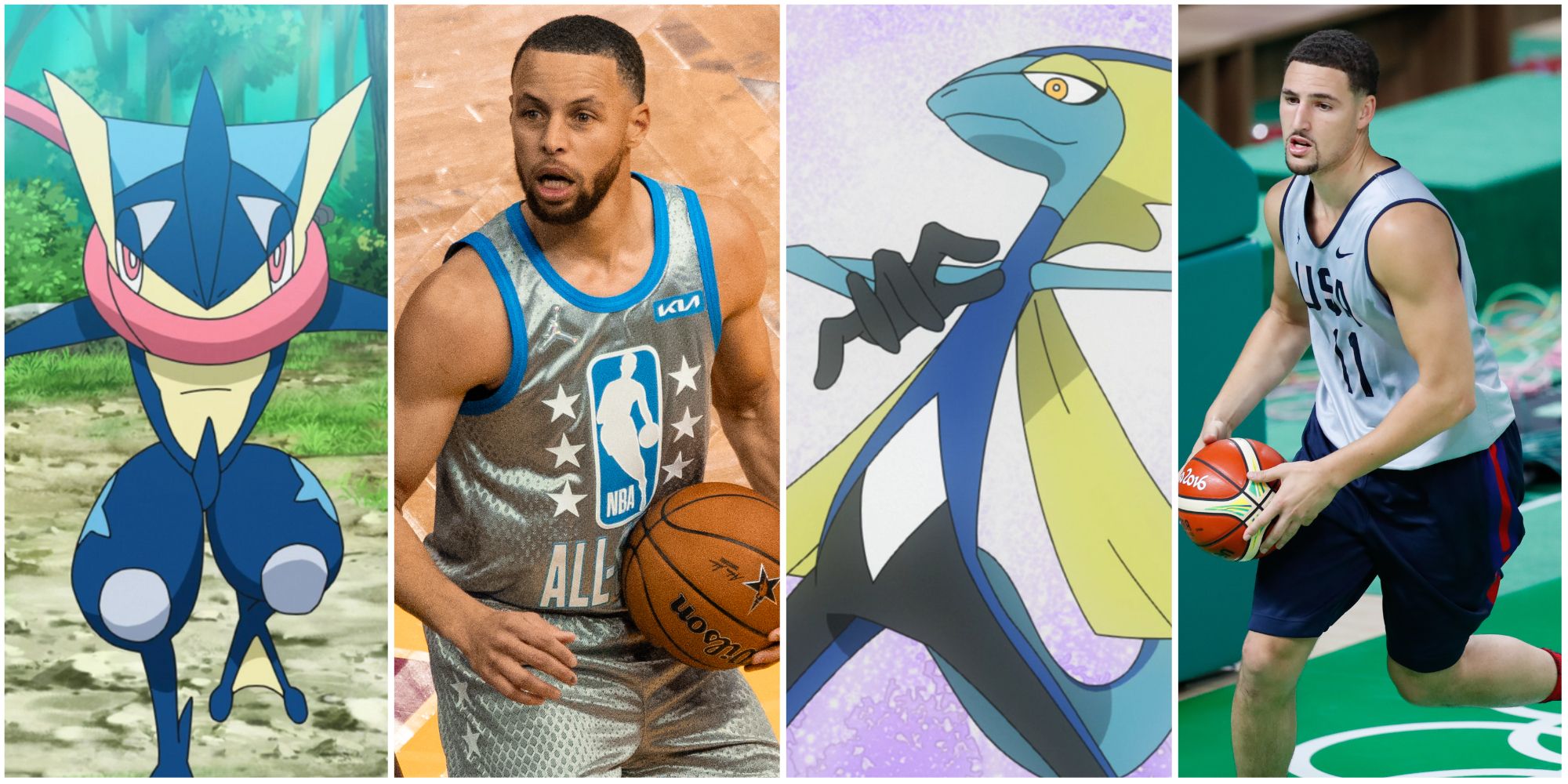 They don’t call them the Splash Brothers for nothing. The Golden State Warriors’ legendary backcourt shoots the wettest jumpers in the history of the NBA, having broken several three-point shooting records. In lieu of that, there are two Water-type starters that fit the bill and splash like no other: Greninja and Inteleon.

Greninja and Steph Curry both took over the world at one point, with Ash-Greninja being the highlight of the anime during its time, and Steph winning back-to-back MVPs as the main cog of a Warriors dynasty. Not to mention, both are absolute offensive machines, with Greninja’s offensive stats and wide movepool, and Steph’s jaw-dropping ball-handling and finishing skills to go along with the otherworldly shooting.

While not quite as renowned, Inteleon and Klay Thompson are similarly excellent snipers. Inteleon literally has a signature move called Snipe Shot and Sniper as a hidden ability. That generates tons of boosted critical hits, and Klay is arguably an even more accurate shooter than Steph when he’s hot. Both are also marketable in their own ways: Sobble is even regarded as one of the cutest first-form starters, and Klay’s fun-loving personality has generated tons of memes. 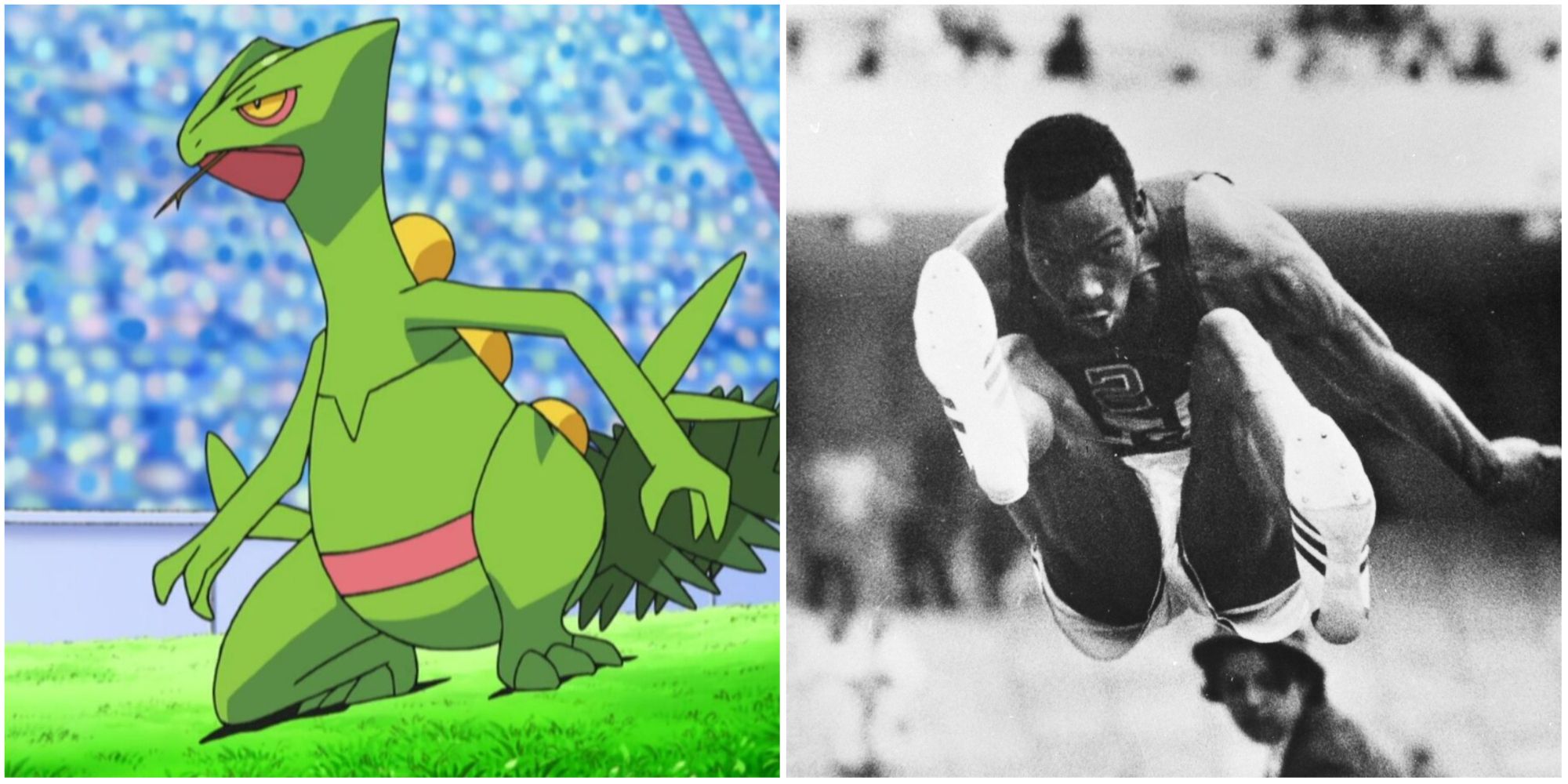 With its zooming Speed and the PokeDex noting its propensity to jump from tree to tree, Sceptile makes a great track star, particularly tailor-made for the long jump. Sceptile’s athleticism is basically supernatural compared to humans, but one Olympic gold medalist comes pretty damn close in that regard.

In the 1968 Olympics, Bob Beamon won gold in the men's long jump event with a 29 foot, 2 ¼ inch jump, destroying the world record by almost four feet. That remained the world record for 23 years, and it remains the Olympic record today. 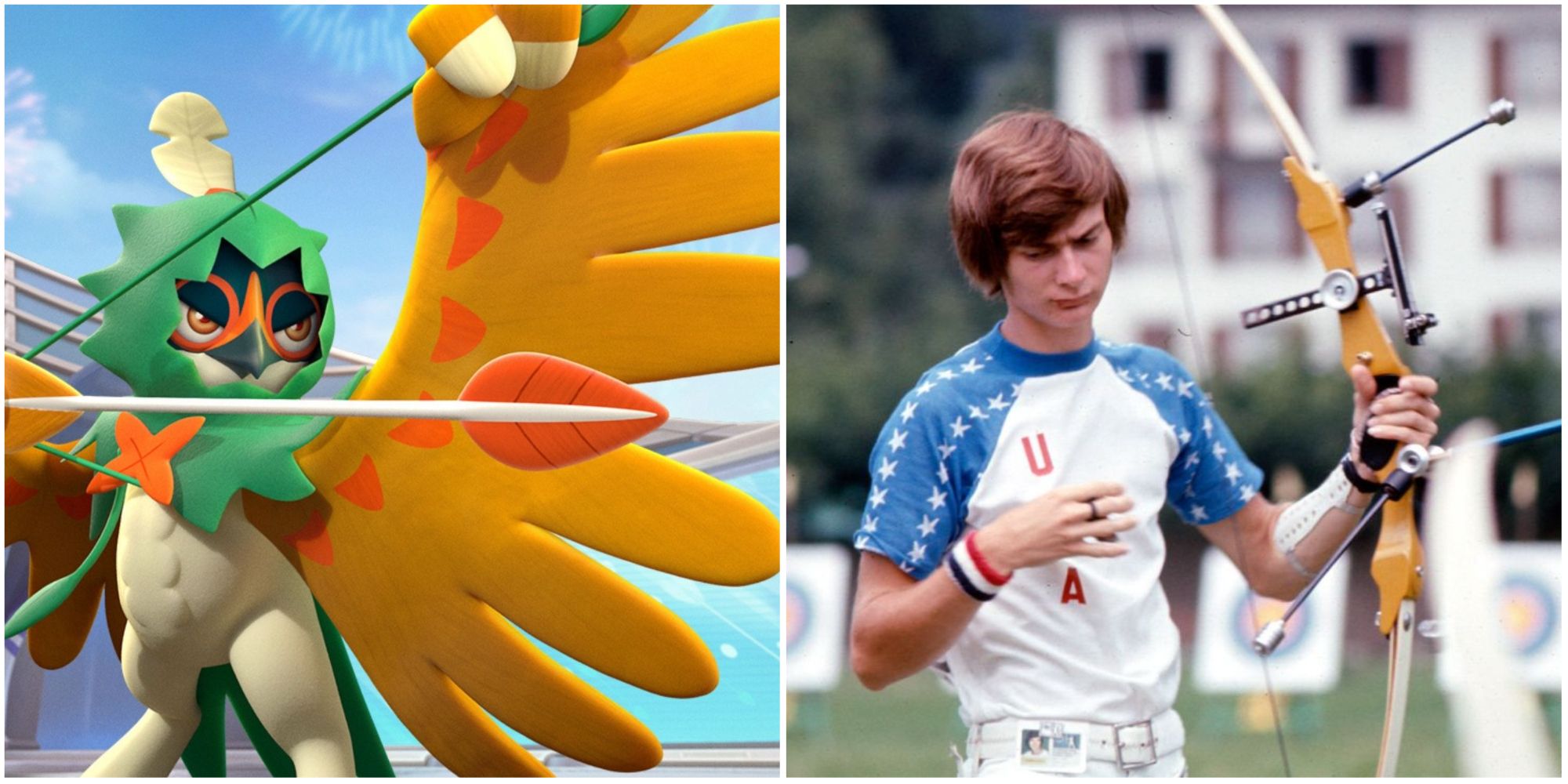 Yet another obvious reference to sport, Decidueye is an archer. Decidueye has unreal accuracy with the bow, as indicated by its PokeDex entries that say it can shoot at pebbles from hundreds of yards away. Again, there’s an Olympic gold medalist that comes close to its abilities: Darrell Pace, a decorated archer who won the United States three medals at the Olympics (two gold, one silver) and several more medals elsewhere.

Like Bob Beamon, Pace was the long-time owner of a world record, having broken the FITA round score record several times and his peak record of 1341 standing for ten years. It’s not an exaggeration to say an archery showdown between Pace and a Decidueye would be must-see TV. 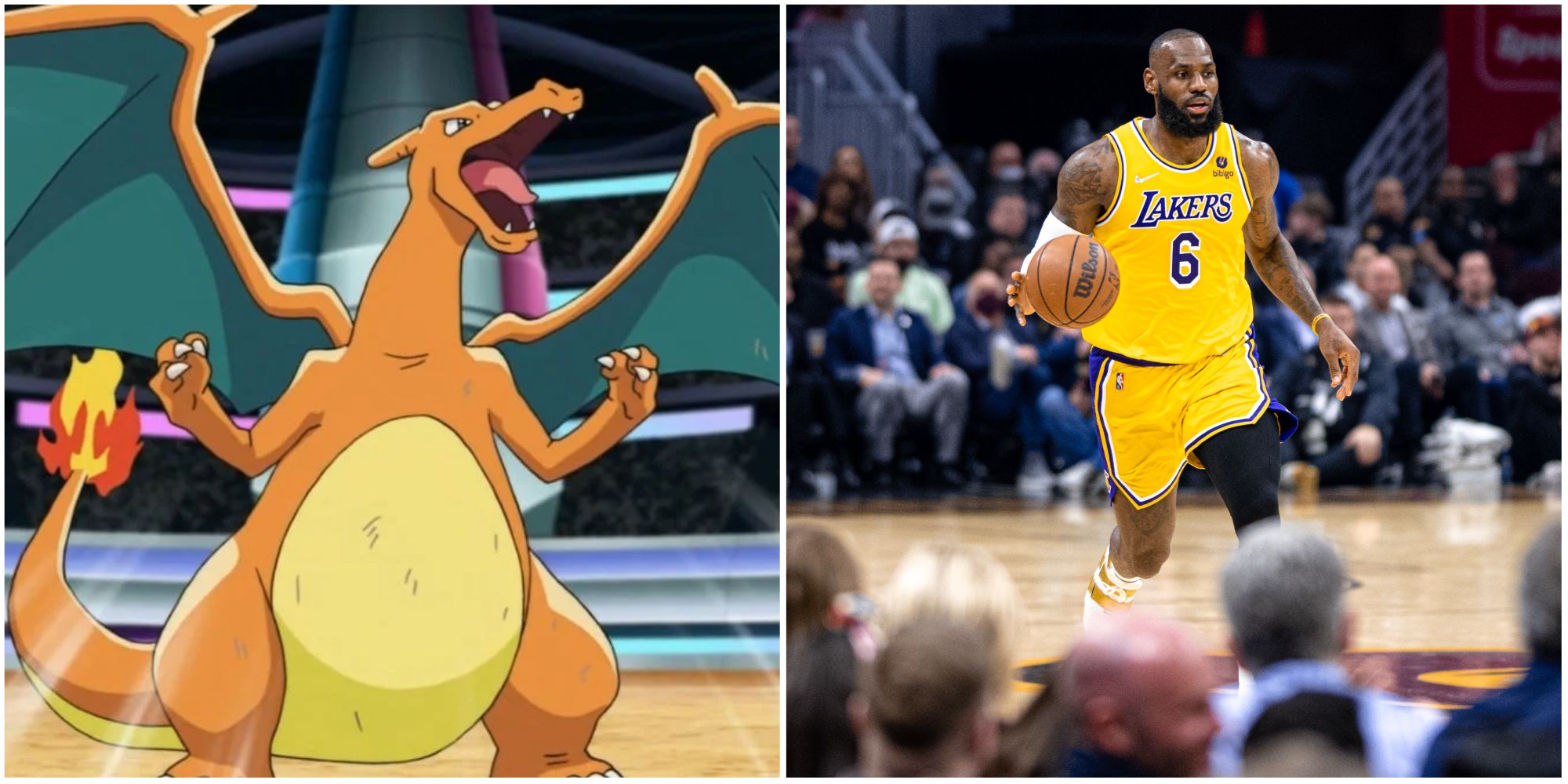 Even after nine generations, Charizard is still one of the most popular Pokemon in the world. And even after almost a twenty-year career, LeBron James is still one of the best players in the NBA. They’ve both been hot shit since they entered the spotlight, and they've kept their reputations as superstars with unrelenting ferocity.

Charizard got two Mega Evolutions and a Gigantamax form, which LeBron equals by being regarded as having multiple peaks in his career and still ranking among the highest in jersey sales. Ultimately, they both deserve spots on the Mount Rushmores of their respective fields. Not to mention, LeBron is a Laker now, but he did play for the Miami Heat once upon a time.

If not released into the public domain, photography cropped or otherwise repurposed for this list is licensed under either the Creative Commons Attribution 2.0 or Attribution Share-Alike 4.0 International license.