As time passes, we are learning more and more about how far and wide the Pokemon world reaches. Regions across each game introduce new Pokemon, with a grand total of over 1,000 as of the release of Scarlet and Violet. With this amount of Pokemon, it's no wonder that many of them are based on real-life animals.

You might not notice it at first, but many Pokemon have a counterpart that exists in our world; the same Pokemon you know and love may not be so fictional after all! Here, you can find Pokemon that are based on real animals, along with a picture of them for comparison.

Updated December 1, 2022 by Jacqueline Zalace: With the recent release of Scarlet and Violet, we've added even more Pokemon to our list. Additionally, we've removed some entries that didn't really resemble the animal mentioned. 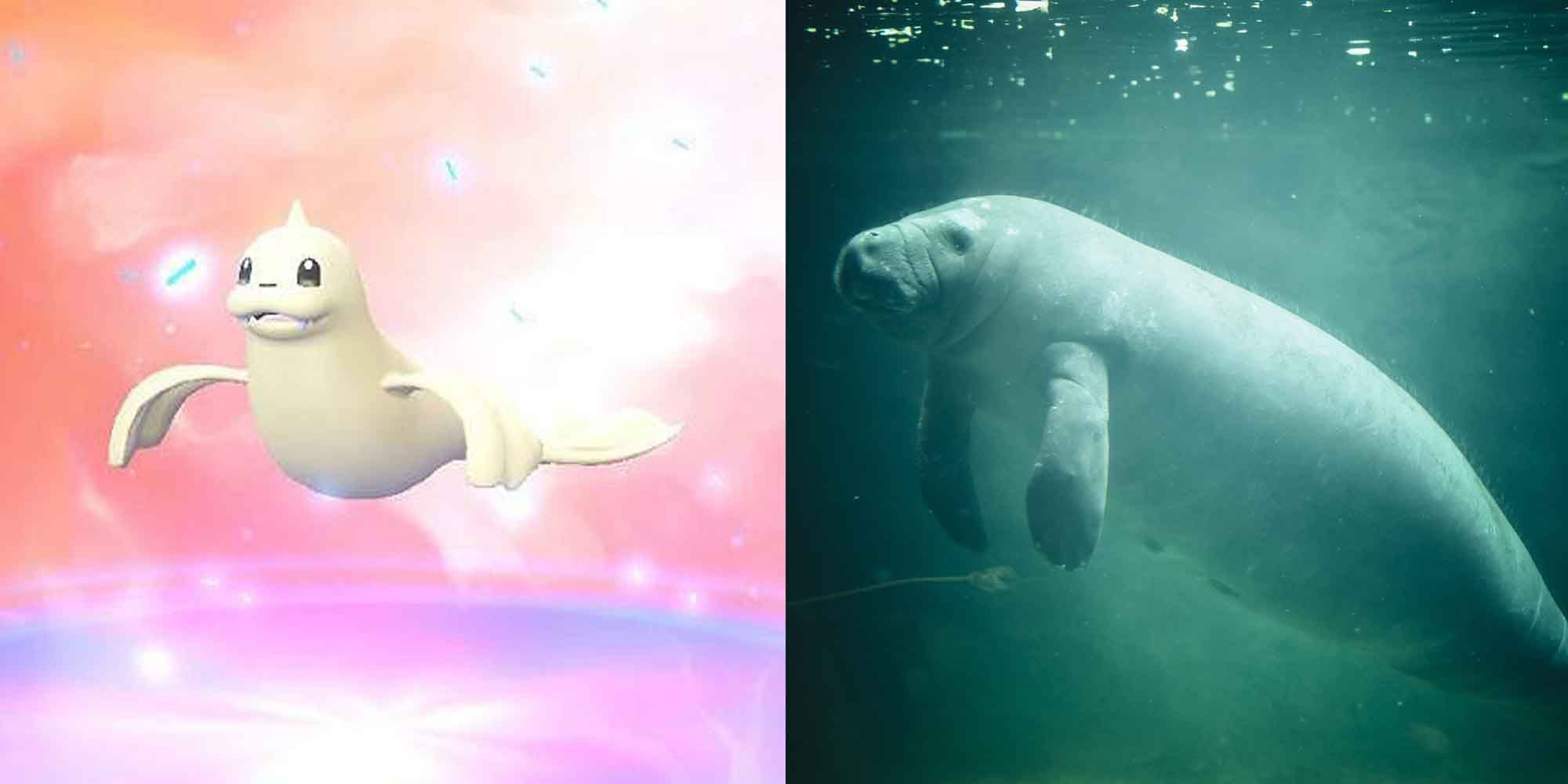 There are more similarities between Dewgong and a Dugong than the spelling of their names. They are both aquatic mammals (Dewgong has fur) with streamlined bodies. There are numerous differences as well; Dewgong is a carnivore, while Dugongs are herbivores.

Dewgong is an Ice-Water type Pokemon, whereas dugongs prefer warmer coastal waters. This is one of the few instances where the real-life version of a Pokemon is much larger than the Pokemon. Dewgongs are about five feet seven inches in length and weigh around 260 pounds, while Dugongs are around ten feet long and weigh close to 1,000 pounds. 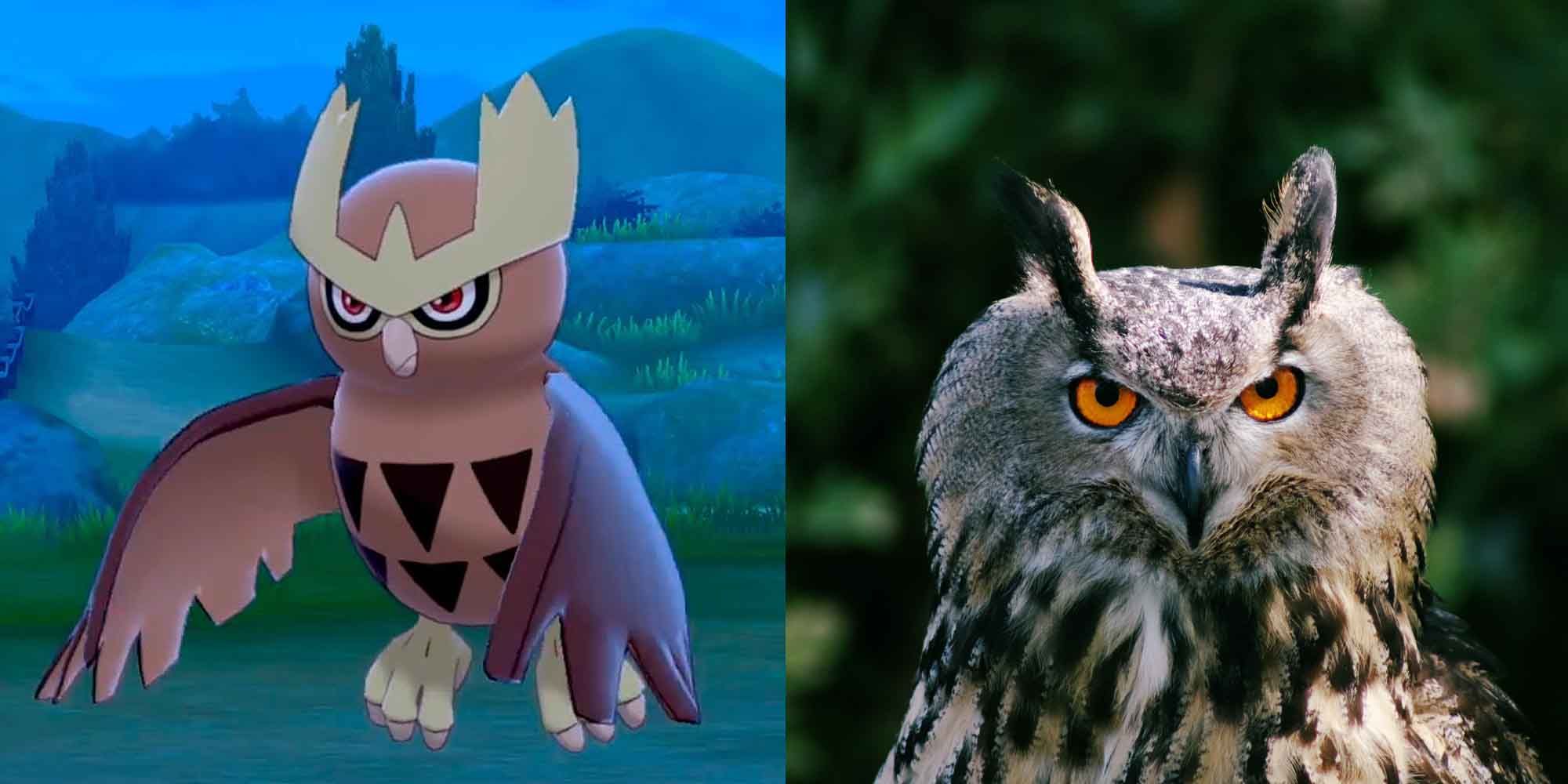 The most noticeable difference between these two is in size. The great horned owl only stands about two feet tall, while Noctowl stands over five feet tall. 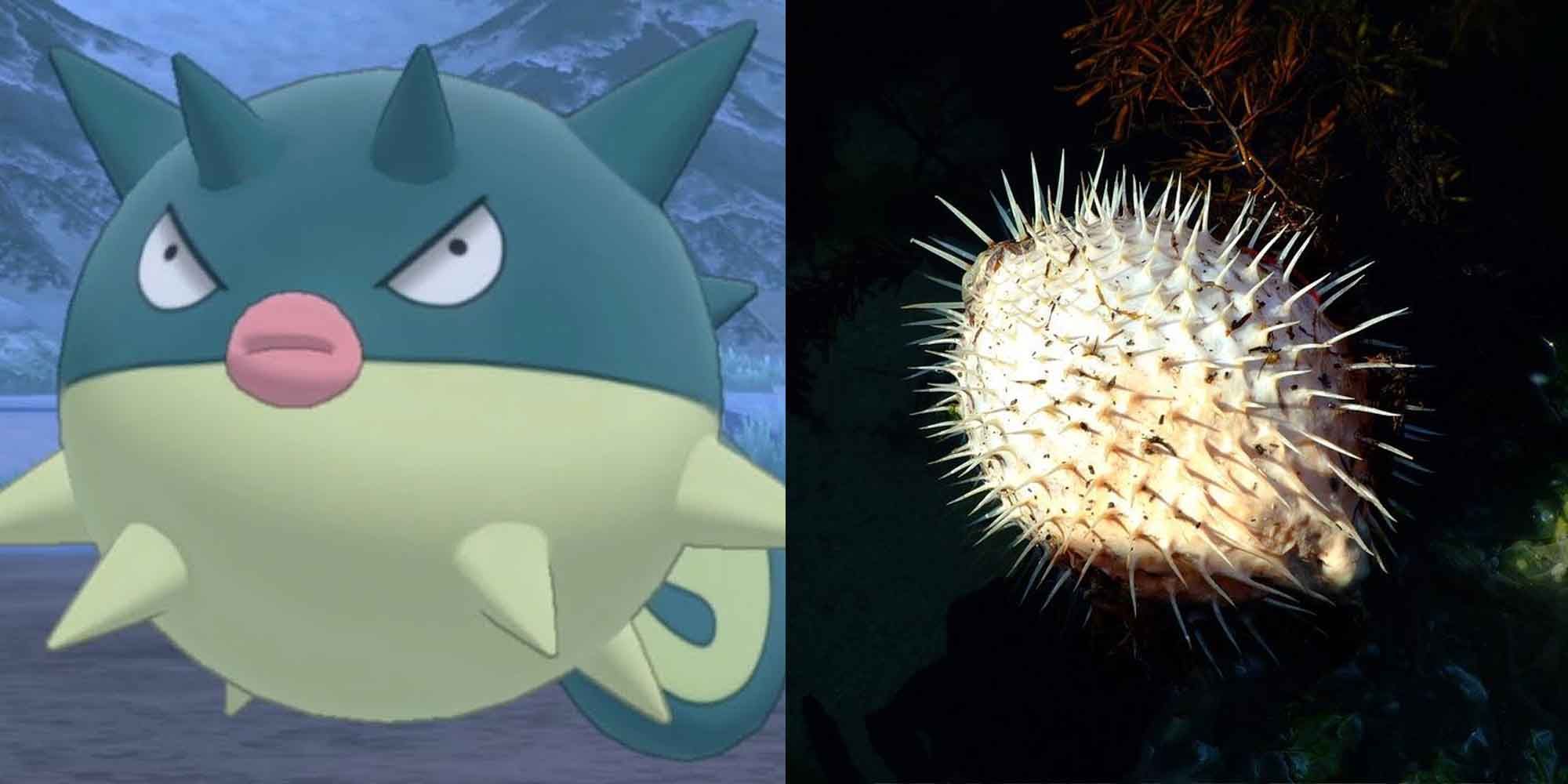 Qwilfish's type is Water-Poison, which, coincidentally, is the same type as the real-life blowfish. Okay, real-life animals don't have Pokemon types. The flip side of that coin is that the blowfish inflates itself, like Qwilfish, causing spikes to protrude from its body. The blowfish is also one of the most poisonous animals on Earth.

In size and weight, the puffer fish and Qwilfish are comparable. We should all feel lucky that a blowfish can't shoot its toxic spikes like Qwilfish can. 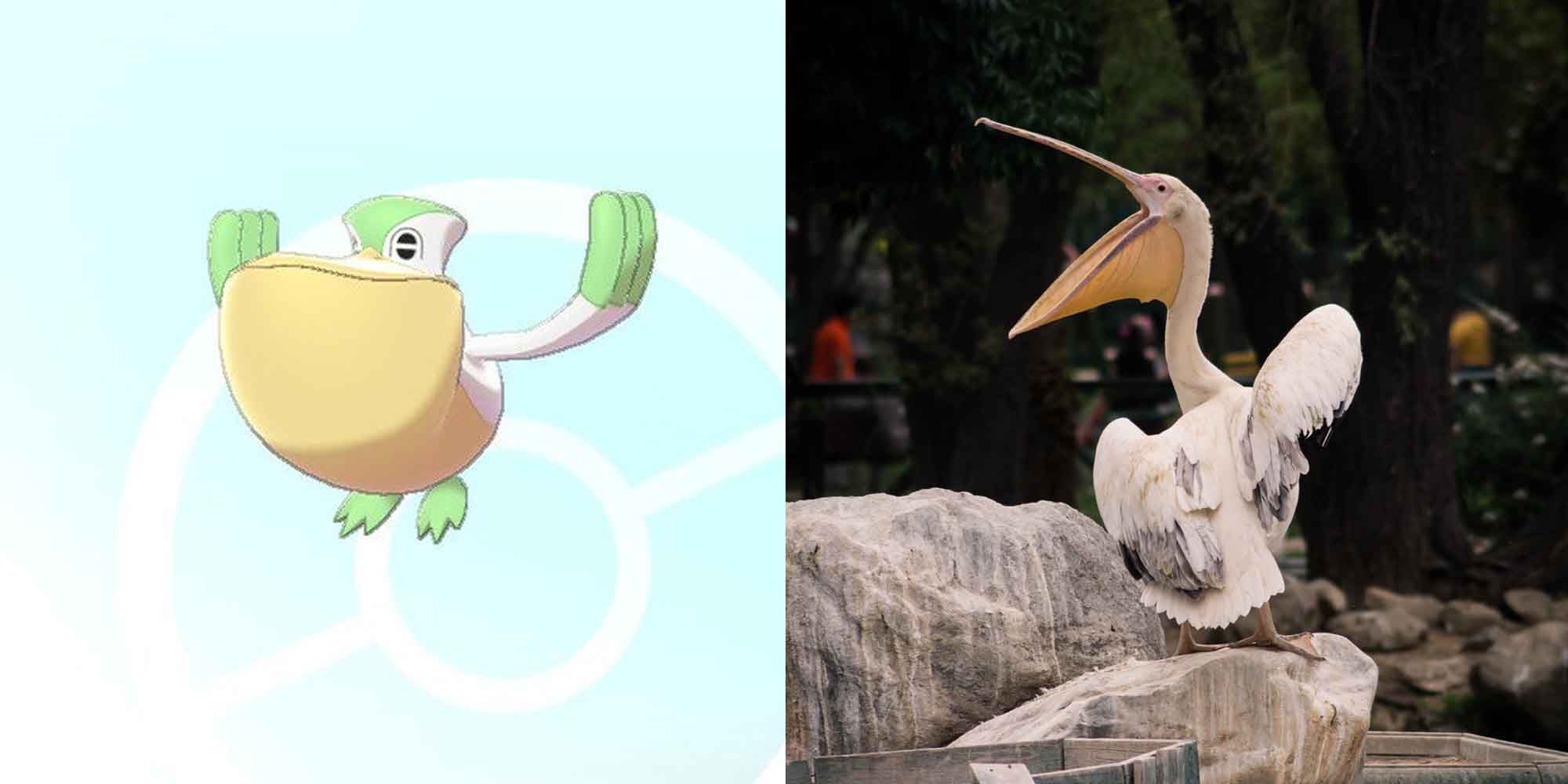 A large bird. Check. A large bird with a huge pouch under its beak. Check. Yeah, that's a pelican. The Pelipper's Pokedex description tells of a kind-hearted animal that protects small animals by carrying them in their beak pouch, and is referred to as the messenger of the skies.

Real-life Pelippers, pelicans are extremely aggressive birds that will attempt to carry off small animals, and sometimes babies; they don't do this to protect them, as a Pelipper would. Pelicans and Pelipper are about the same size; however, Pelippers weigh about three times more than the largest pelican. 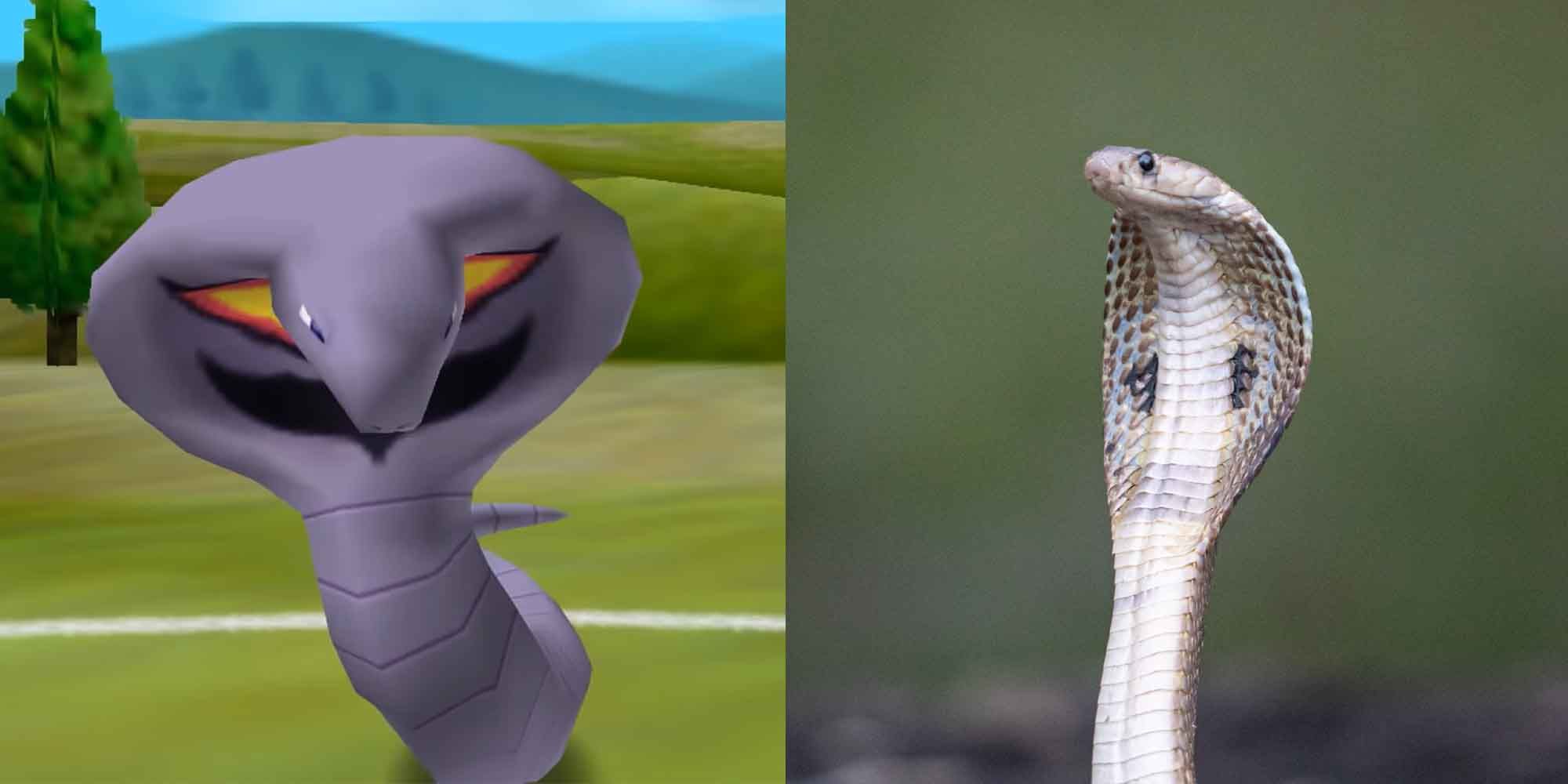 Arbok was part of the first generation of Pokemon, and is clearly influenced by the real-life King Cobra. It's right there in the name – Arbok spelled backward is Kobra. Subtle, huh? Arbok is quite a bit larger than a King Cobra, and a lot heavier.

Despite being physically larger it could be argued that, to a human, an Arbok isn't that much deadlier than a Cobra. Both are poisonous, both can spit caustic substances, swallow their prey, and coil their body to deliver a more powerful blow.

13/18 Poliwag Is A Translucent Tadpole 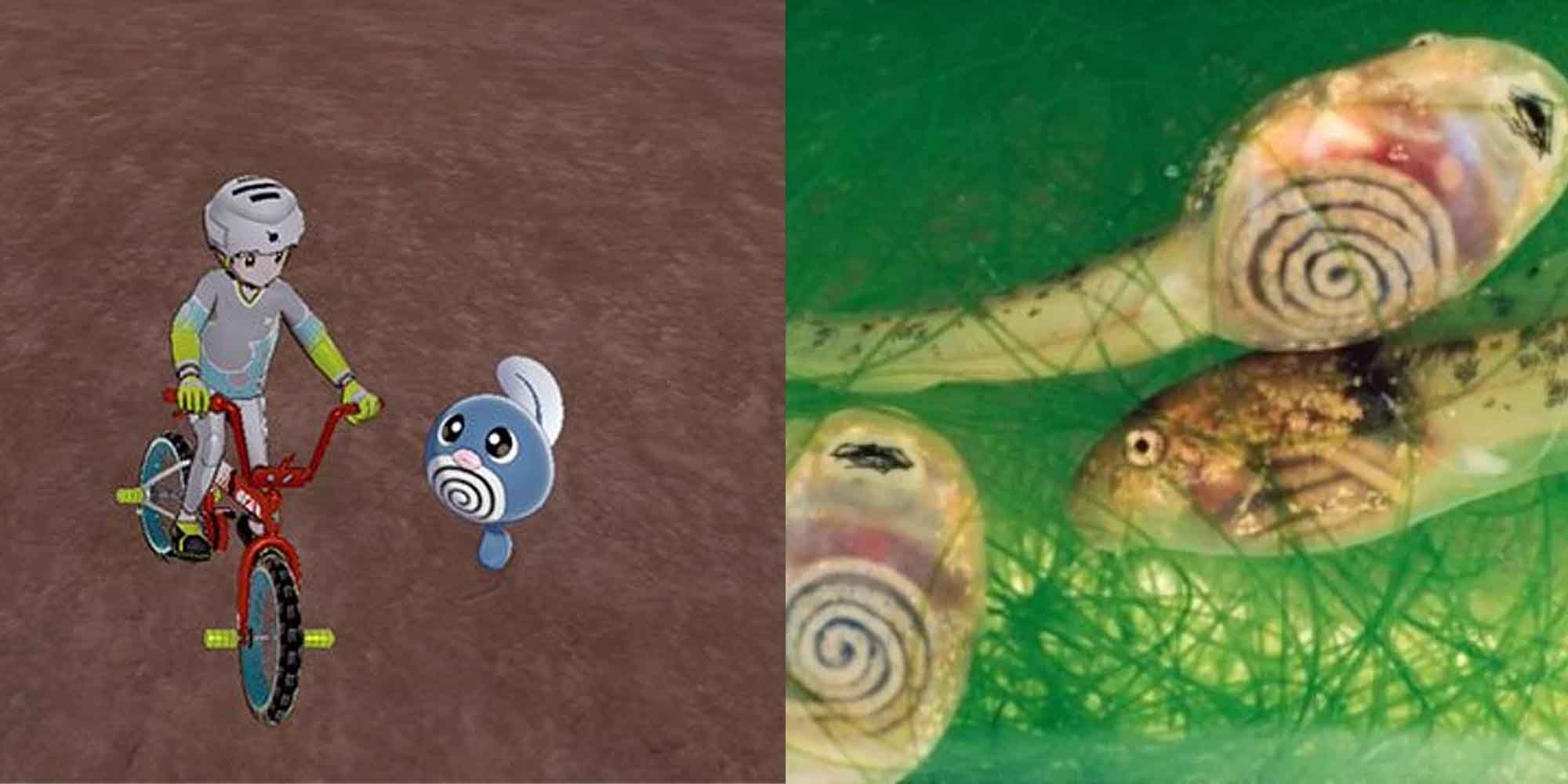 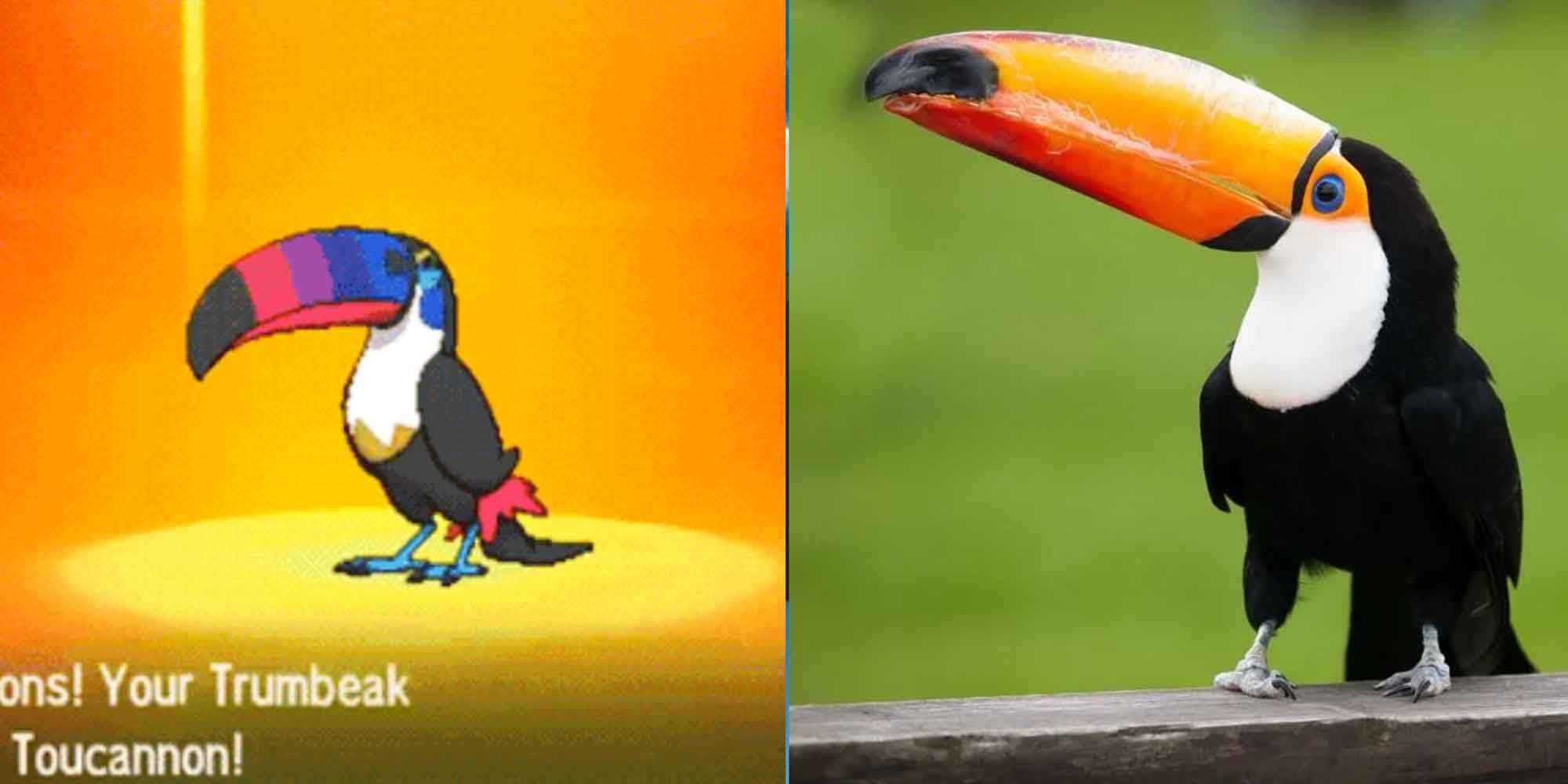 Even the most inexperienced Pokemon trainer should be able to recognize this Pokemon's identity with ease. Toucannon's name doesn't attempt to mask its identity since it is a real-life animal in plain sight!

The Pokemon Toucannon is undoubtedly based on a Toucan, given its colorful elongated beak and bird-like appearance. The Pokemon Company did not attempt to give this Pokemon a distinct look as its real-life doppelganger is near-identical. 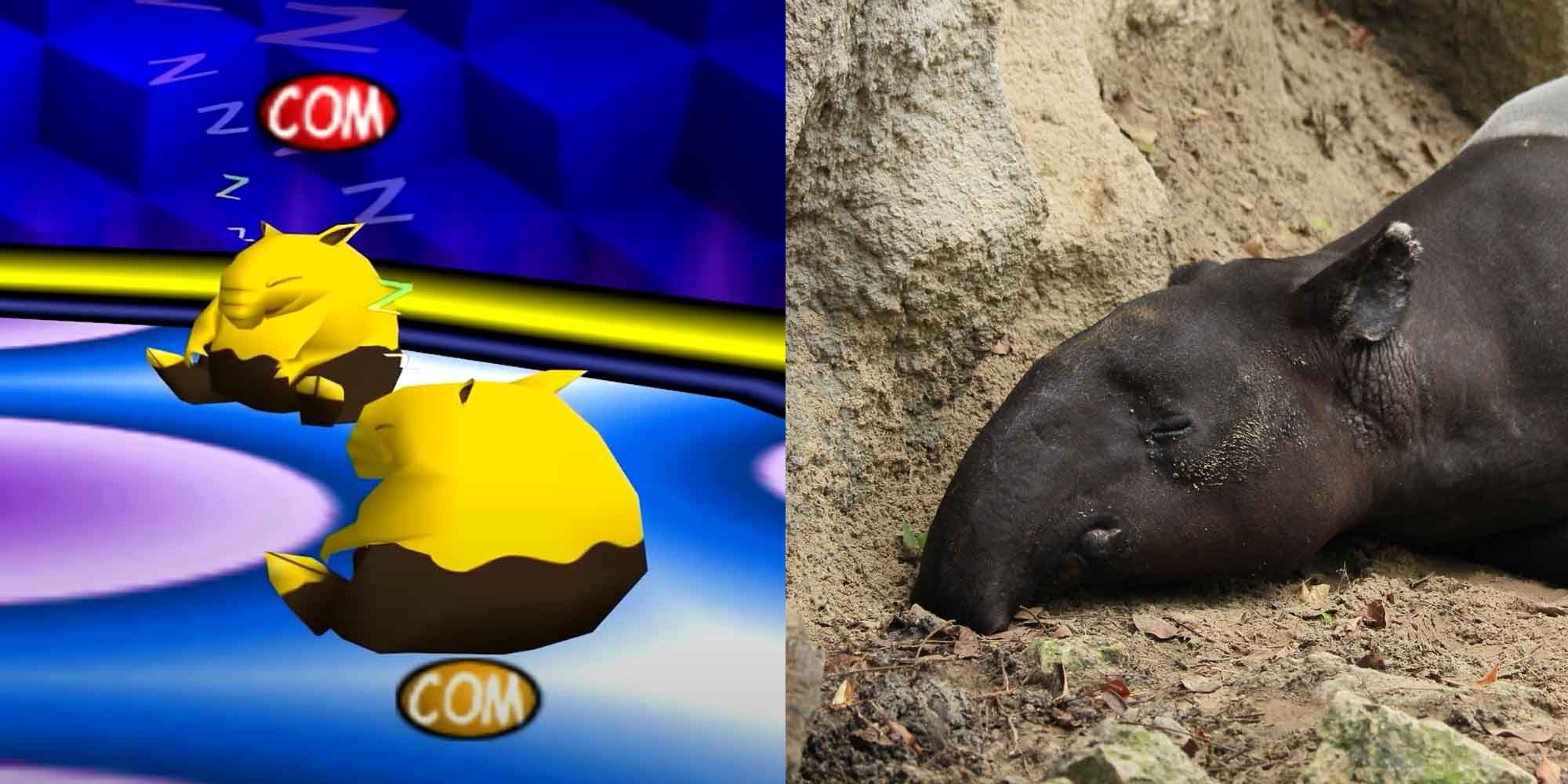 The population of the Tapir is dwindling, which is why many may not have heard of this animal. This real-life Pokemon has an origin that dates back approximately 50 million years, and it can be found in Southeastern Asia and parts of Malaysia.

10/18 Butterfree Is A Butterfly 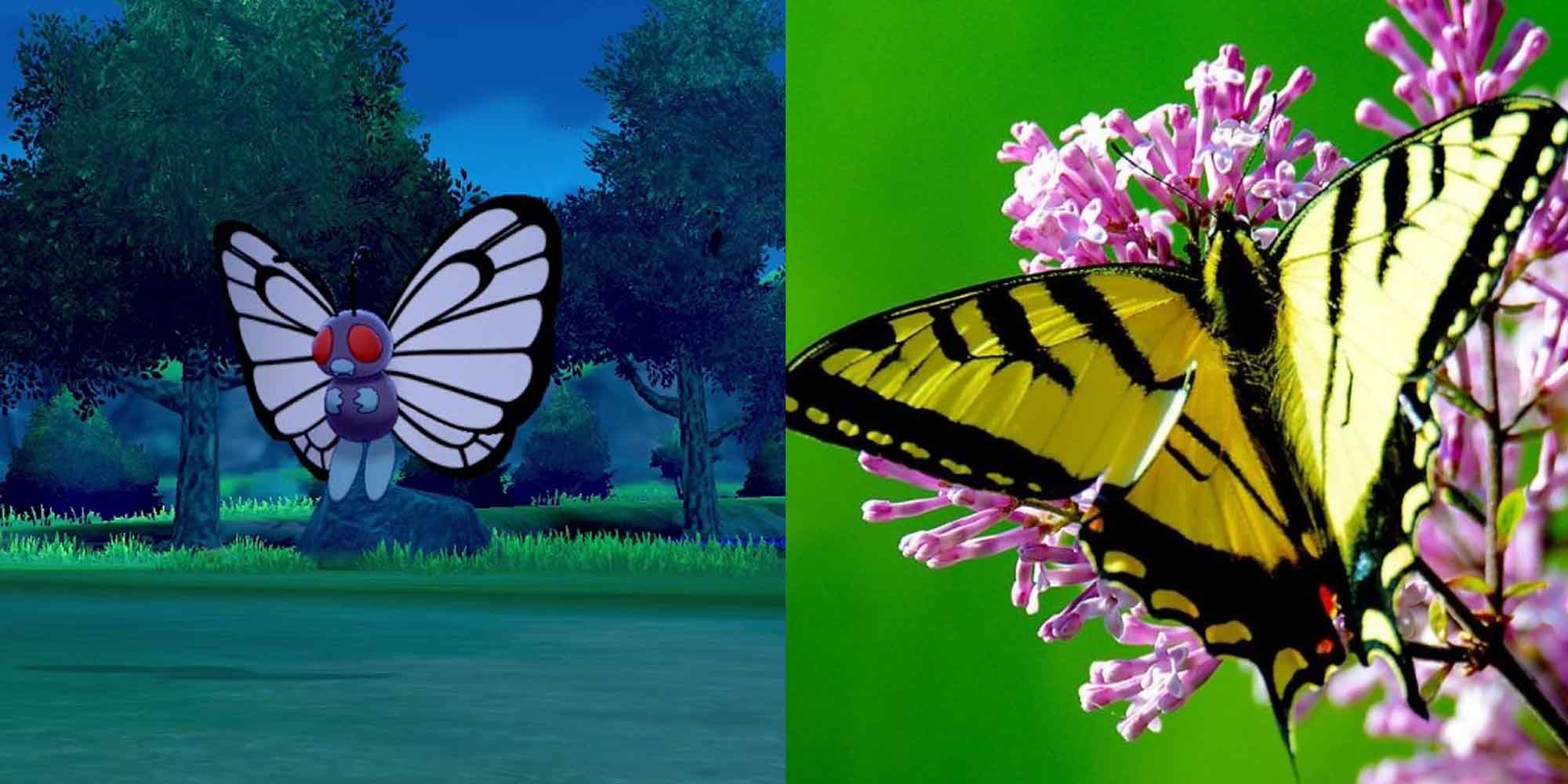 The combination of the words 'free' and 'butterfly' form the name Butterfree. This is one of the easiest Pokemon to spot that exists in real life; the size of the Pokemon was enlarged to fit with the game, but there's no mistaking that this Pokemon is based on a butterfly.

There are countless types of butterflies with different shapes and wing patterns. Instead of picking a specific type, Butterfree has a general design, allowing your imagination to run wild. 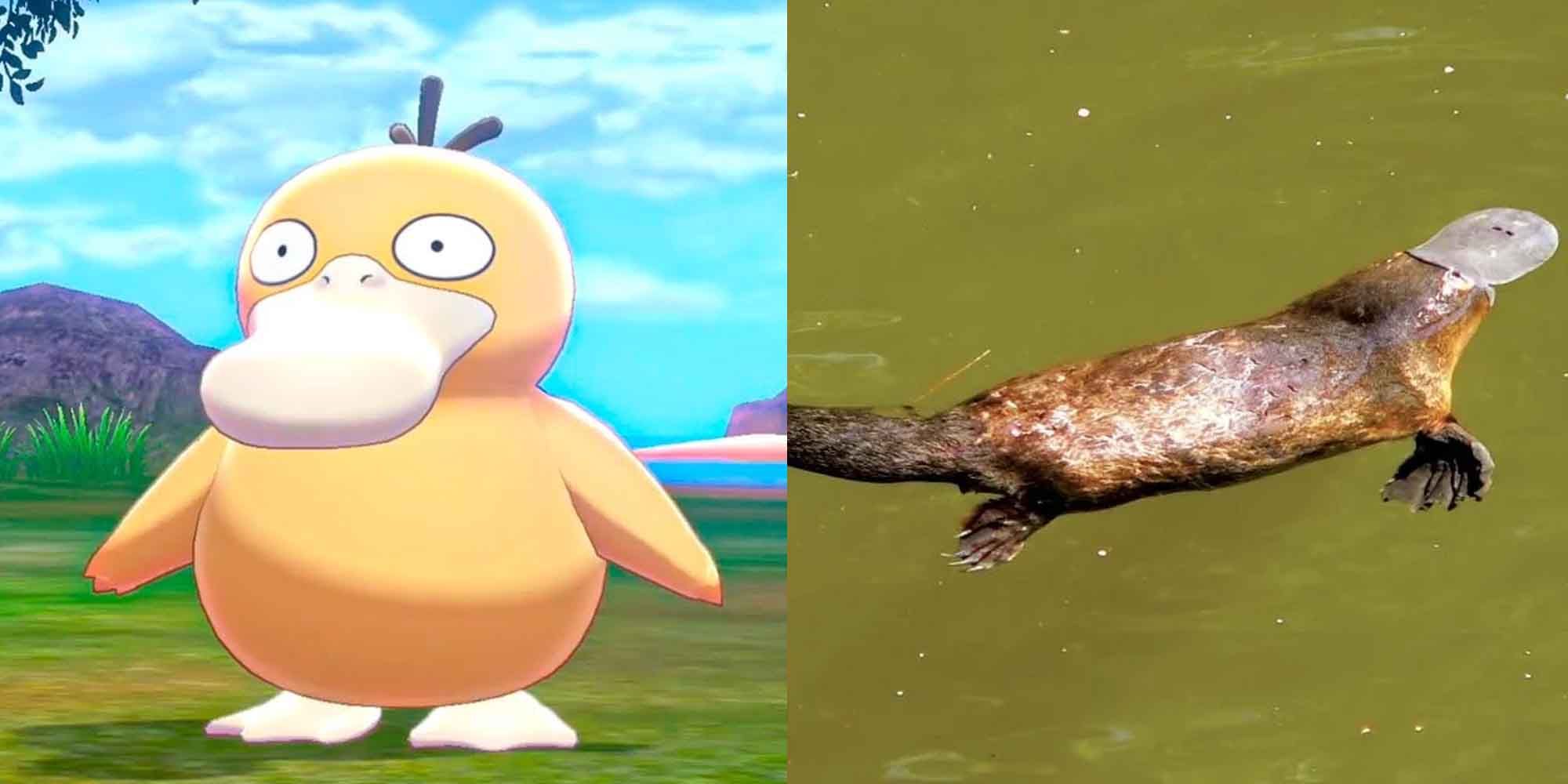 Judging by its name, it would make sense if Psyduck was labeled a Psychic/Water-type Pokemon. This is not the case, but it does fit one of those two categories. Psyduck resembles an animal like many Pokemon in the Pokemon world.

The degree of similarity between a platypus and a Psyduck, however, gives us the impression that Psyduck's inspiration is from the real world. Psyduck is unmistakably a platypus, and the creators of Pokemon didn't try hard to disguise the fact.

8/18 Rhyhorn Is A Rhinoceros 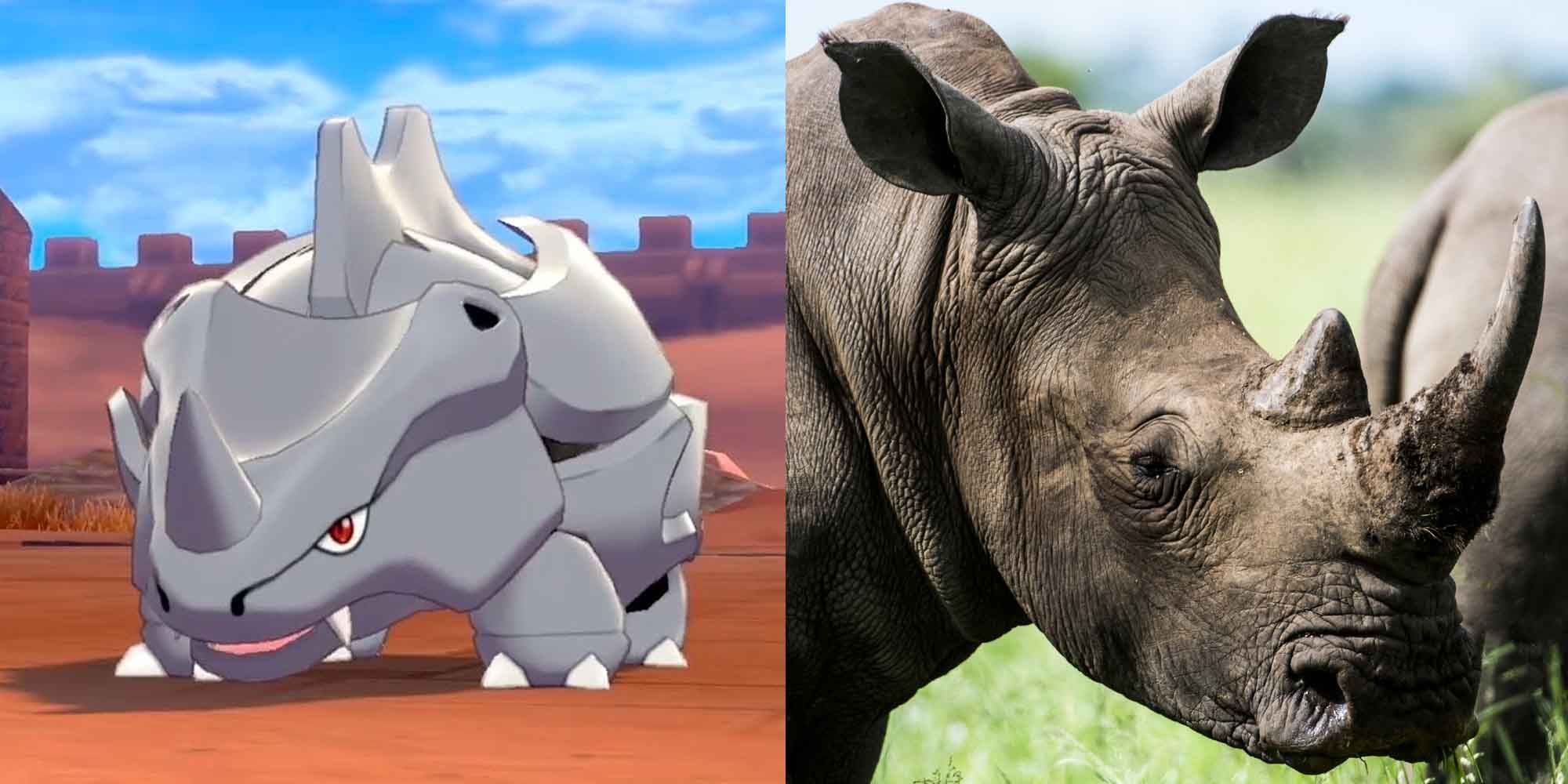 Introduced in the first generation of the Pokemon games, Rhyhorn has a design that is based on a rhinoceros. It's based on a rhino, but it has a rock-hard body, which is why it's part Rock-type. It can use its front horn as a drill to strike opposing Pokemon.

This Ground/Rock-type Pokemon is one of the few that appears to be based on a rhinoceros. Perhaps there should be more rhinoceros Pokemon in the Pokemon world, considering there are only a few. 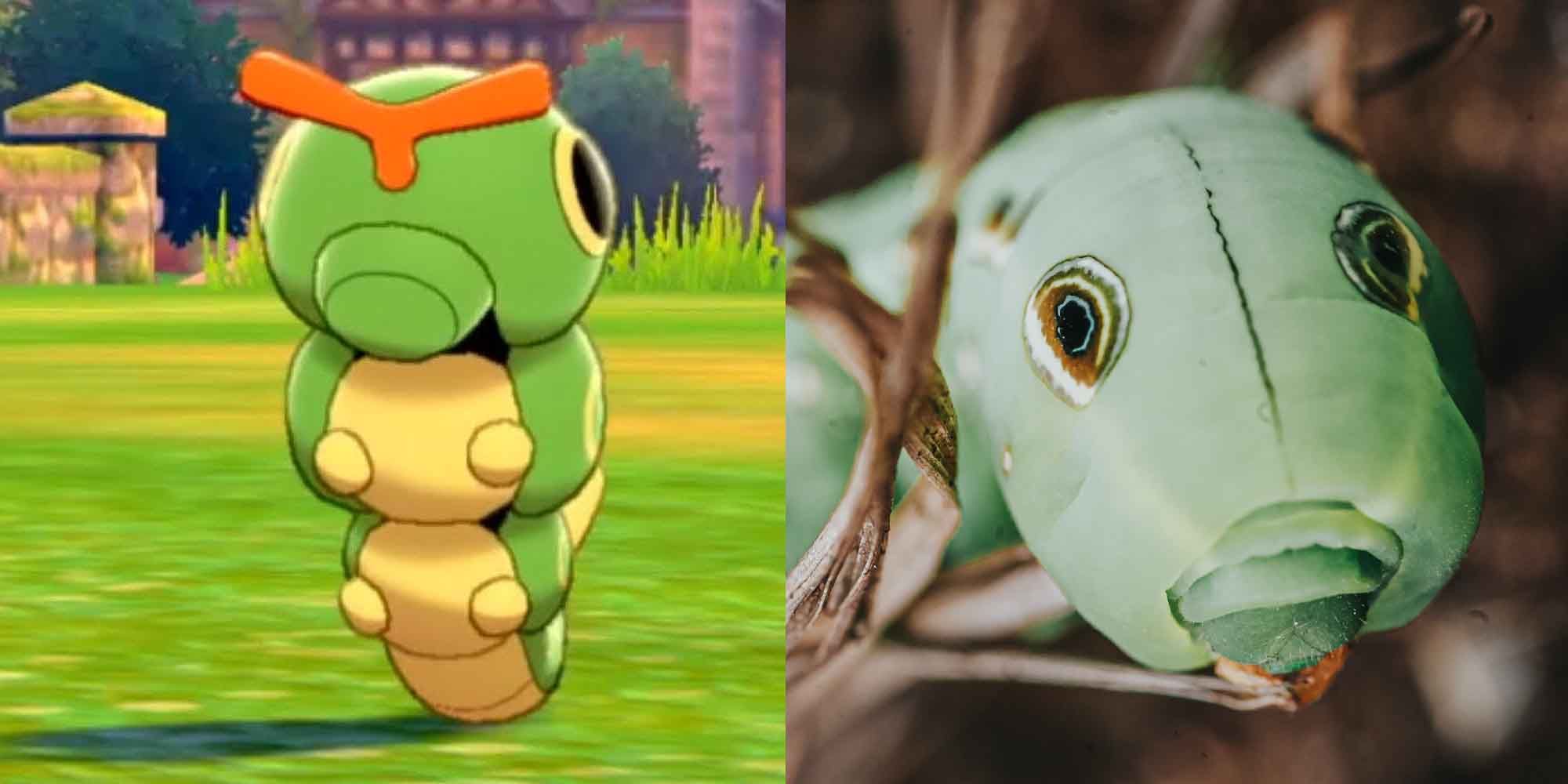 With an unaided eye, it's easy to see that Caterpie is based on a caterpillar. This Bug-type Pokemon is found early in the first generation of the Pokemon games in the Viridian Forest.

Caterpie is a caterpillar, but we can go even further to say it is based on the Eastern Tiger Swallowtail Caterpillar. The resemblance between this Pokemon and its real-life animal is uncanny. Interestingly enough, the eastern tiger swallowtail caterpillar has false eyes, which it uses as a defense mechanism to appear larger.

6/18 Sandslash Is A Pangolin 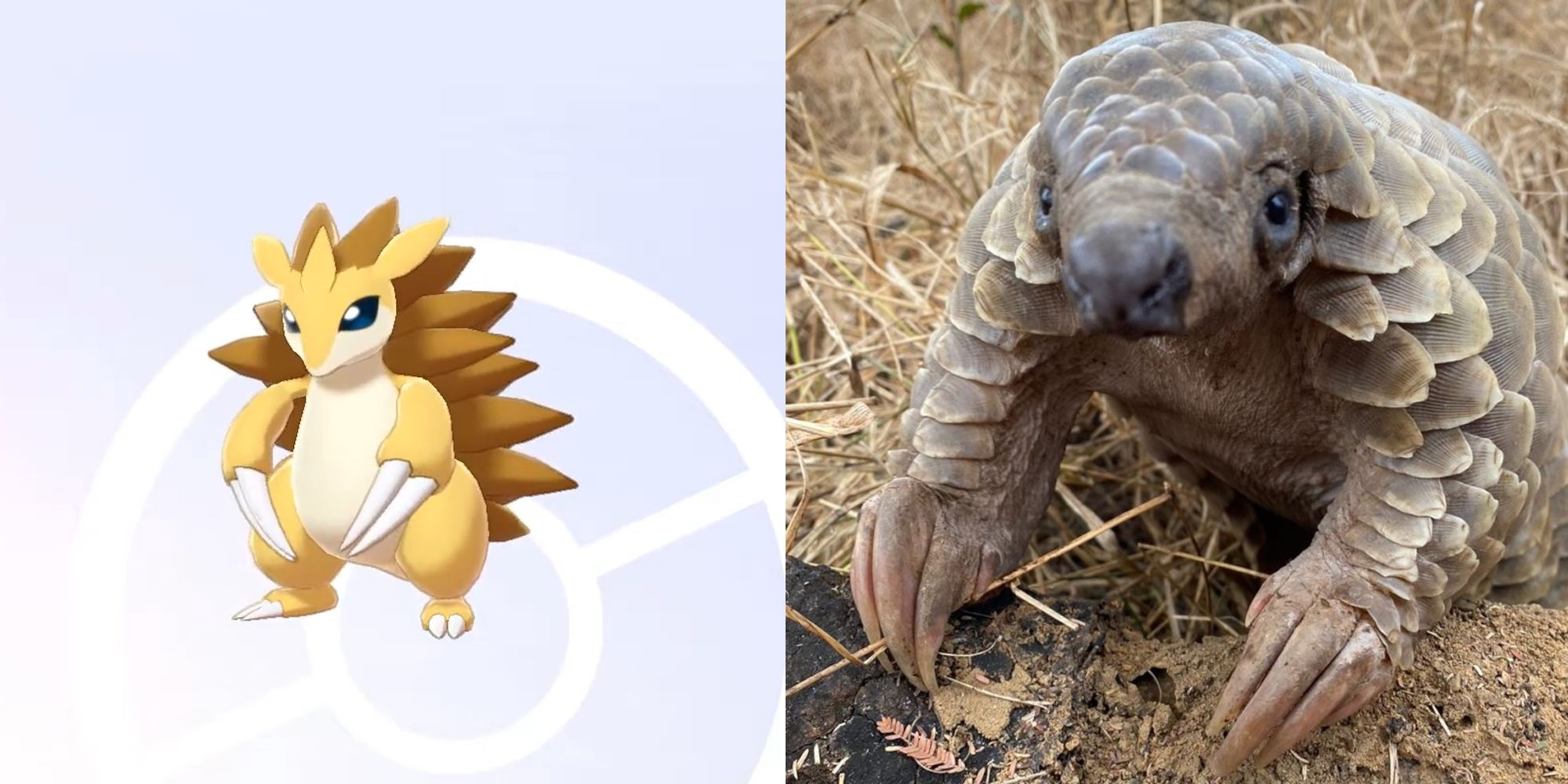 Just by looking at Sandslash's hands, you can tell that this Ground-type Pokemon may be based on a Pangolin. If Pangolins had a type, they would most definitely be Ground-type as well. This real-world animal buries itself in the ground and eats insects such as ants and termites.

Both Sandslash and a Pangolin are roughly the same size, however, Sandslash is a whopping 65 pounds, while a Pangolin is only around five pounds.

5/18 Stunfisk Is A Northern Stargazer Fish 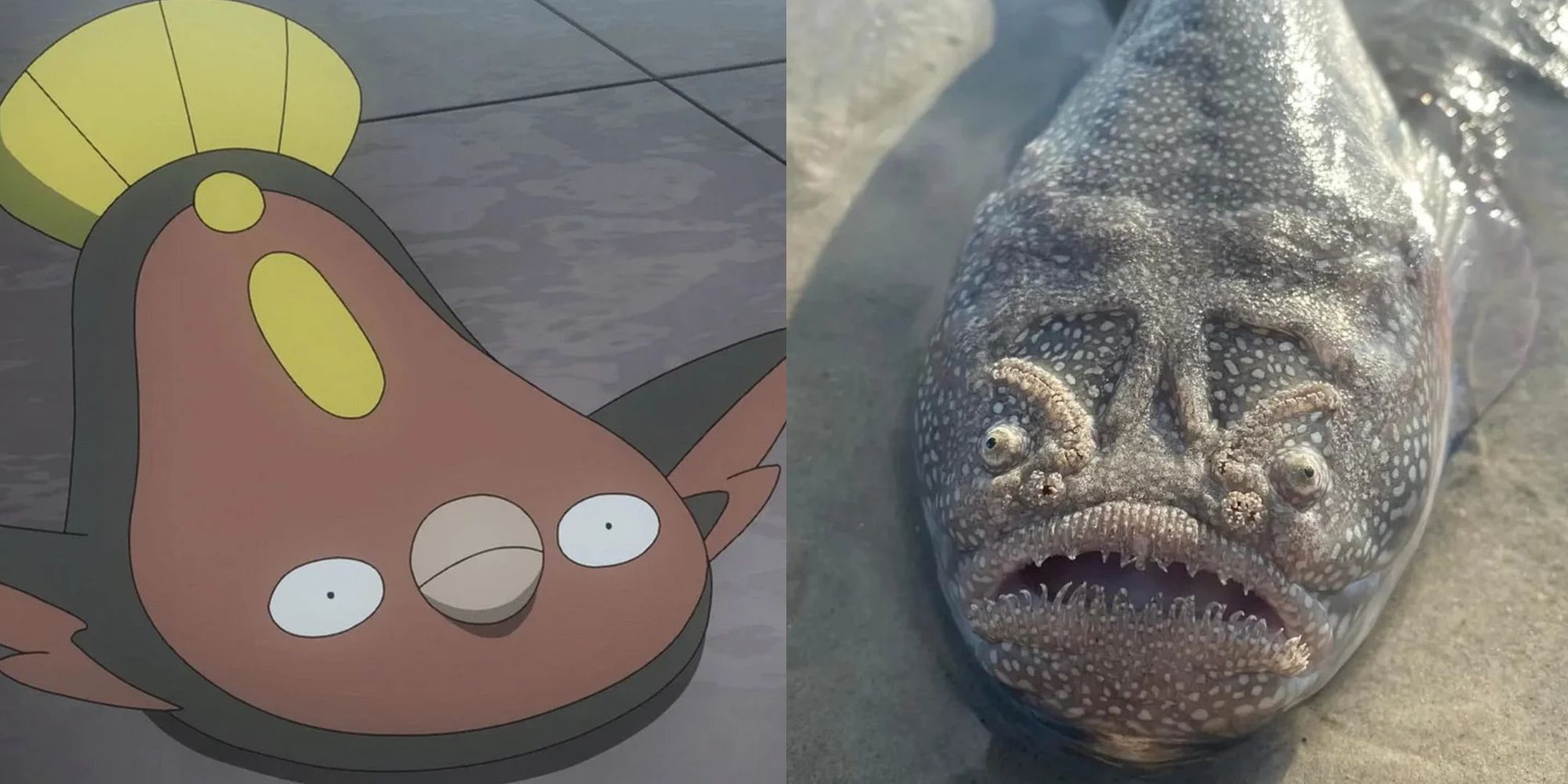 Okay, we know that the real fish above is a bit scary. Although Stunfisk is not as terrifying to look at, both fish have a distinct flat shape. Interestingly, both of these creatures have similar height and weight, although a Stunfisk is on the larger end of the spectrum.

In addition to being based on the Stargazer Fish, Stunfisk shares some similarities with the Flounder. This is also a flat fish, but it has an eye on either side, rather than both positioned on the top. 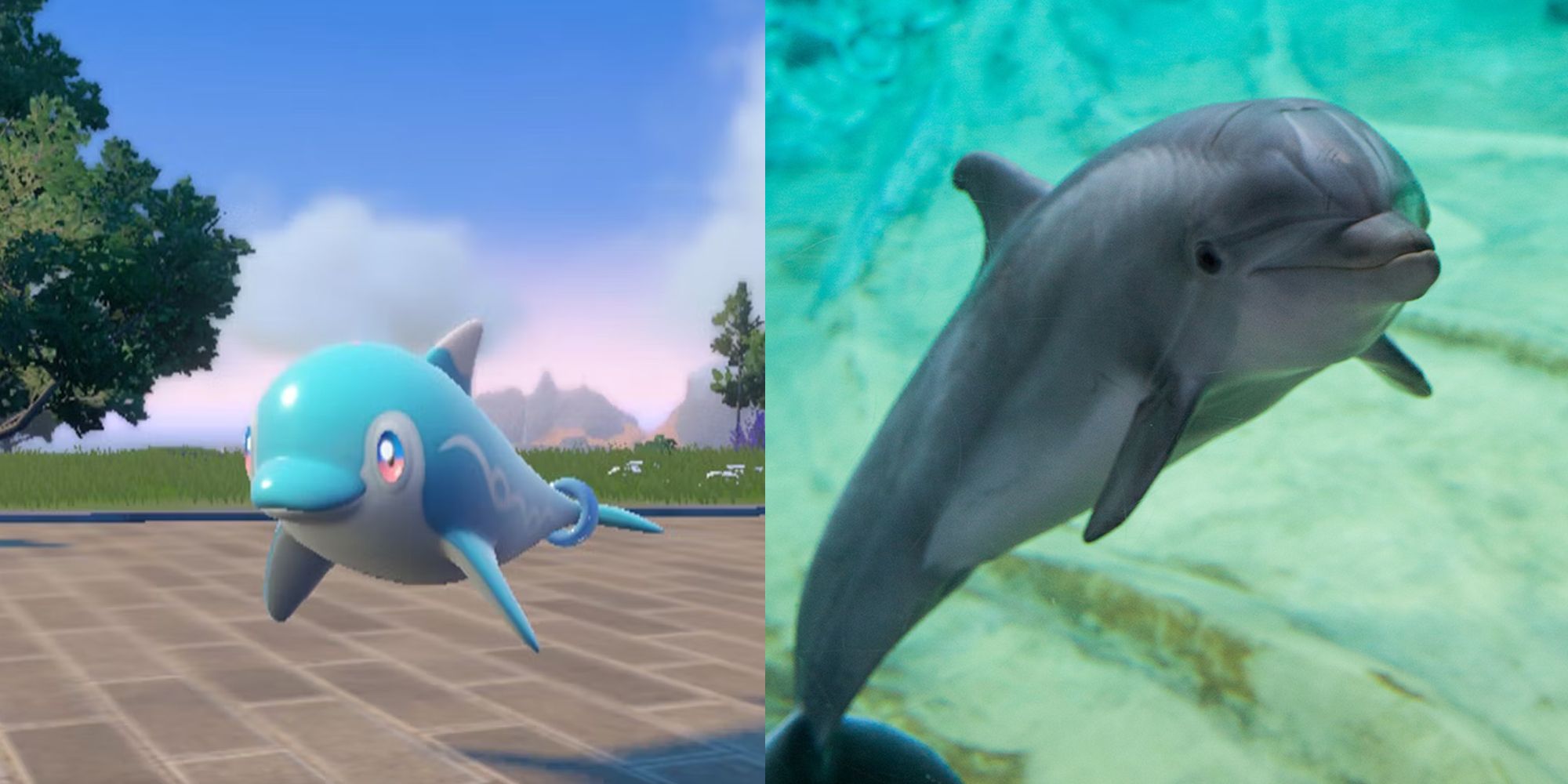 For years, gamers have wanted a Dolphin Pokemon. Now, with the release of Scarlet and Violet, our wishes have come true. Finizen is a Pokemon that looks identical to a Dolphin, and even acts like one in the water.

Of course, Finizen can evolve into Palafin and then transform into its Hero Form, while real-life Dolphins remain the same. 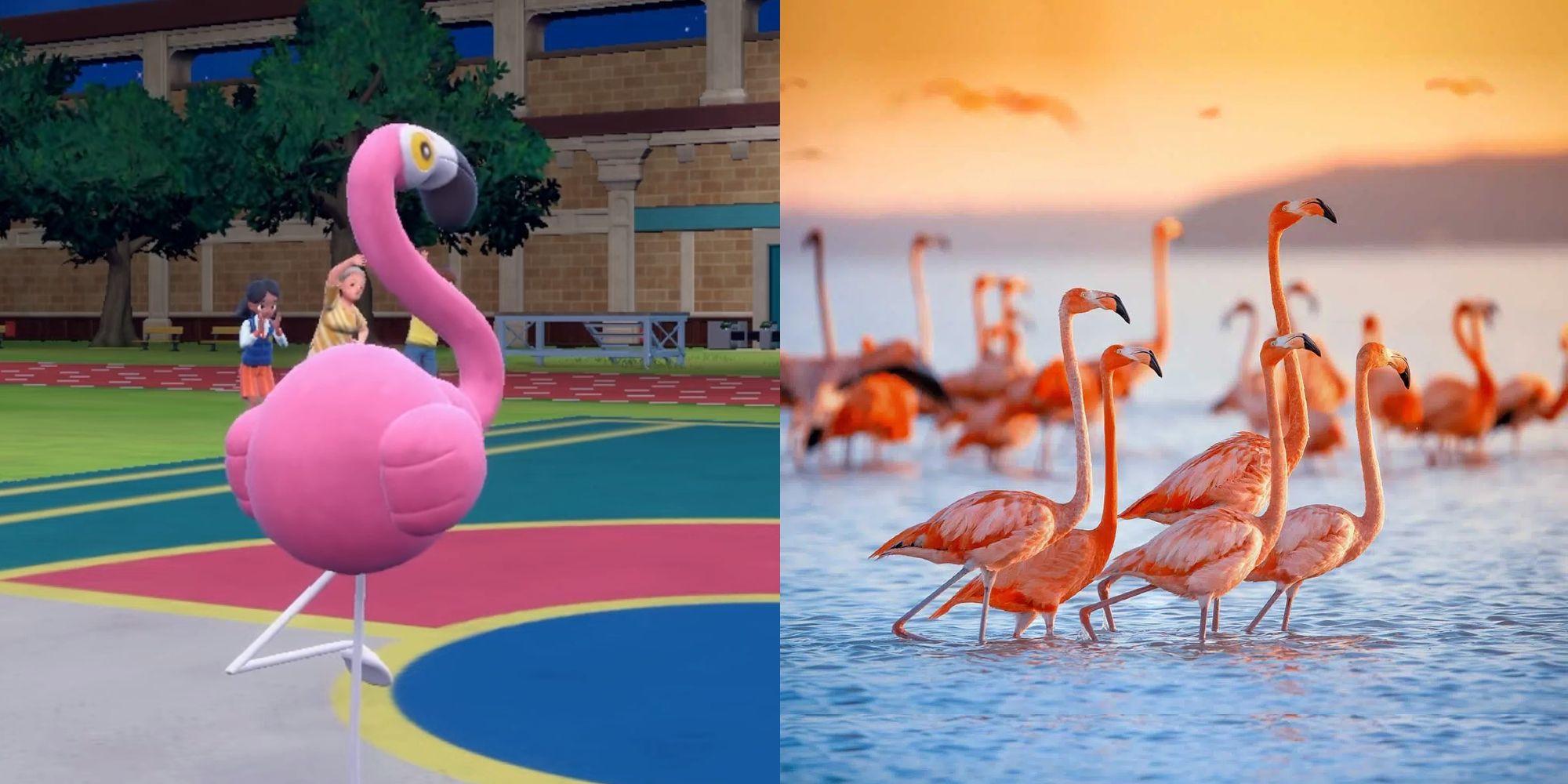 This may be the most unsubtle on our list. The Pokemon Flamigo is one letter off from being a Flamingo, and the resemblance between the two is nearly identical. If anything, Flamigo looks a bit more like the pink plastic Flamingo lawn decoration.

Flamigo towers at around five feet tall, which just a bit taller than the real Flamingo. Both birds tend to gather in groups, which is most likely why the Pokemon's name is a combination of 'flamingo' and 'amigo', which means friend in Spanish.

2/18 Maschiff Is A Mastiff Dog 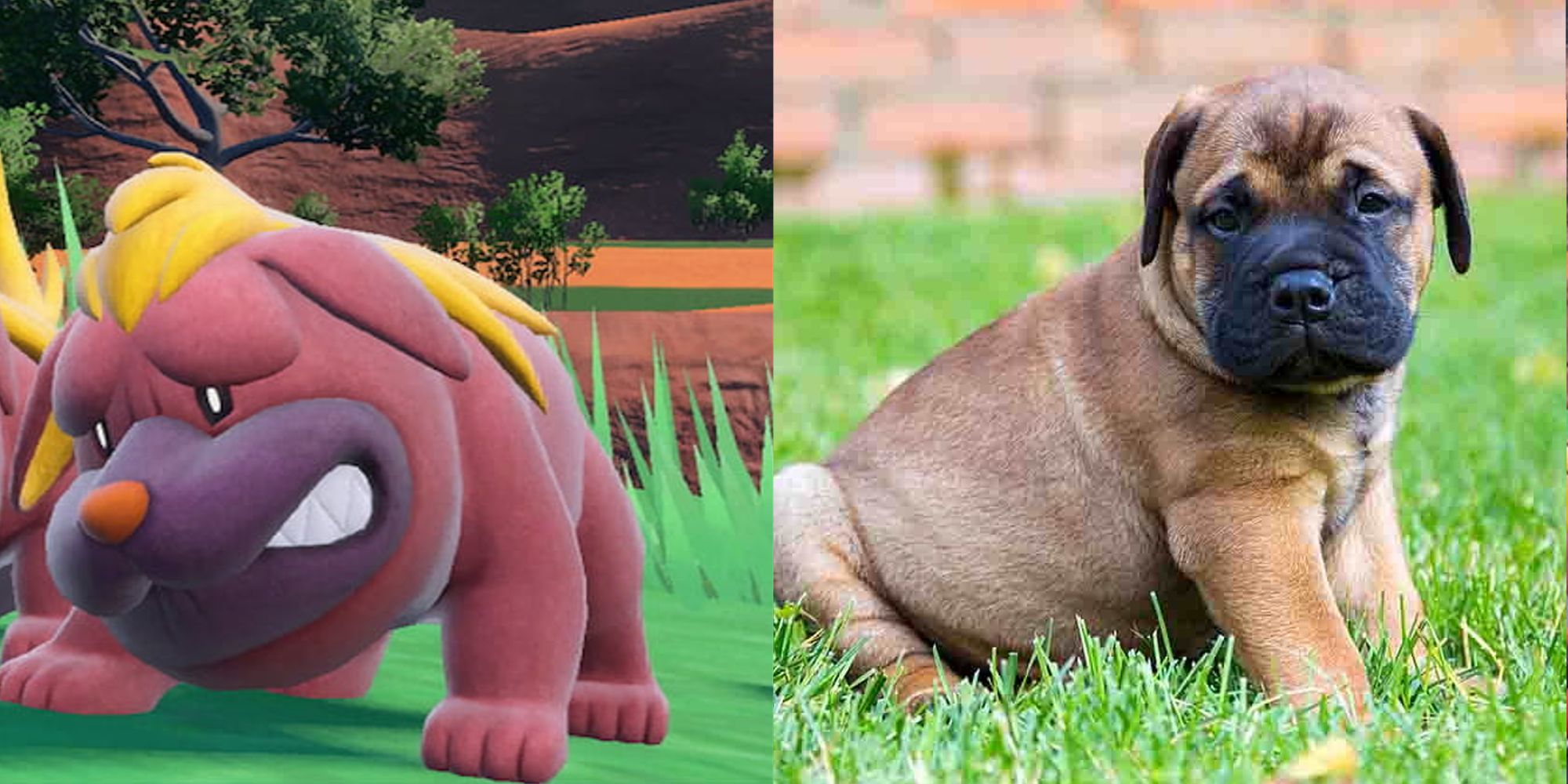 Maschiff is based on the puppy version of a Bull Mastiff. This is a large dog breed that was originally bred as a guard dog. At level 30, Maschiff evolved into Mabosstiff, which resembles a grown-up Bull Mastiff.

Of course, the real-life puppy is quite cute and doesn't have an angry scowl. Still, you can see the resemblance in the fur color, dark muzzle, and floppy ears. Like many other entries on our list, the names of these two creatures are very similar. 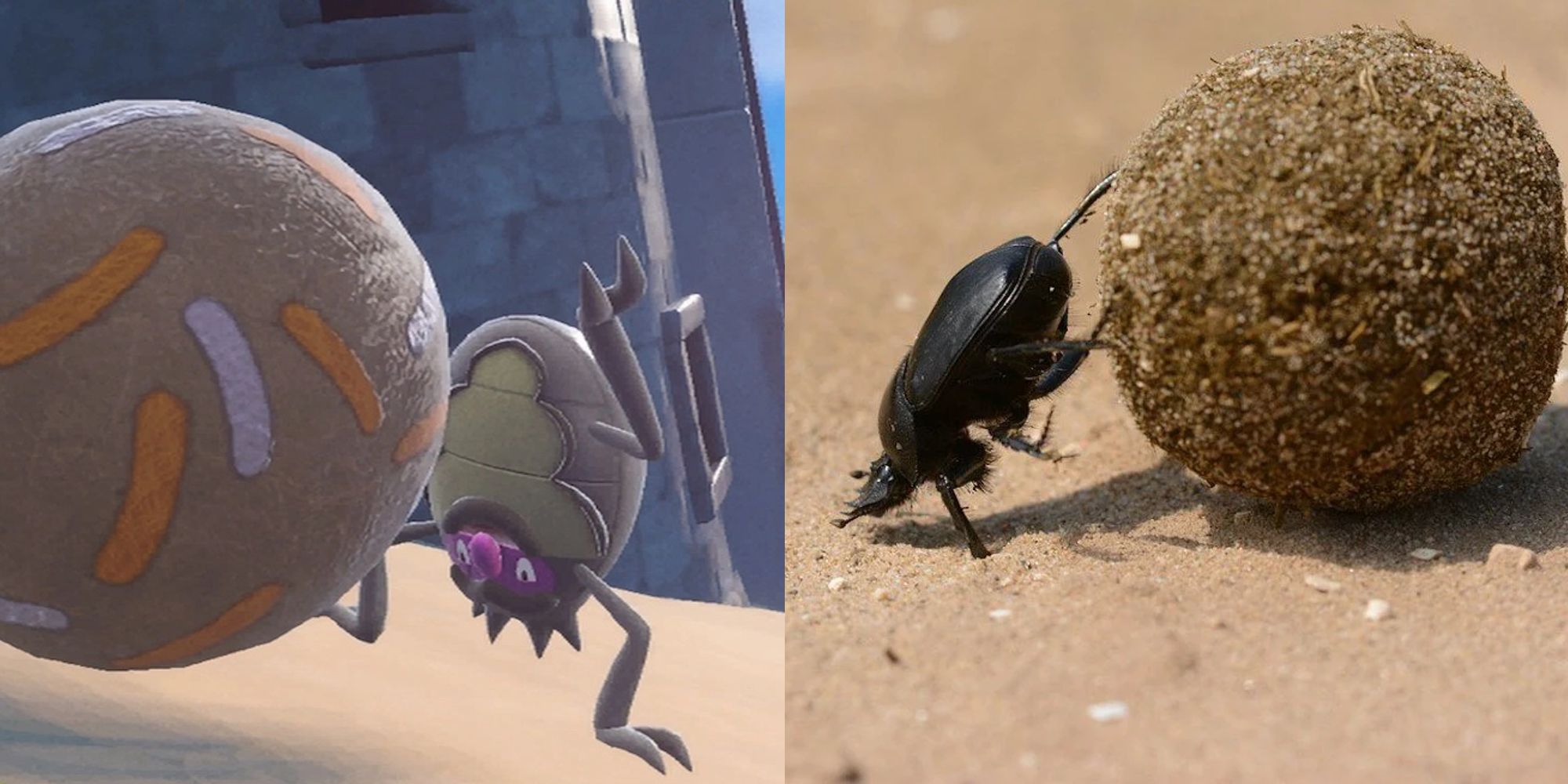 Lastly, we have Rellor. The name of this Pokemon backwards is 'roller', which is definitely what Rellor does. This is strikingly similar to the Dung Beetle, which also rolls giant balls of dung and dirt around. Both creatures also use their hind legs to push, rather than facing forwards.

Although Rellor is only eight inches tall, this is still nearly eight times larger than its real-life counterpart. Additionally, Rellor weights around two pounds, which is way more than the three-ounce weight of a Dung Beetle.