One of 2021’s most pleasant surprises was The Forgotten City. Developed by Modern Storyteller, The Forgotten City is a full adaptation of the mod that shared the same name from Skyrim. You assume control of someone who’s been rescued by a mysterious woman named Karen outside ancient ruins that lead to a magical time portal that sends you back thousands of years to a Roman city.

The few citizens who reside in the city claim that they’re governed by a deadly law known as The Golden Rule. This law states that if just one person commits a sin, the entire populace will be turned into gold. You’re tasked with finding the culprit behind The Golden Rule and to try and save as many people as possible. Throughout the four different endings, there are quite a few hidden plot lines that you might miss.

The following list contains entries that have major spoilers regarding the game's story. Only continue reading this post if you've finished The Forgotten City. 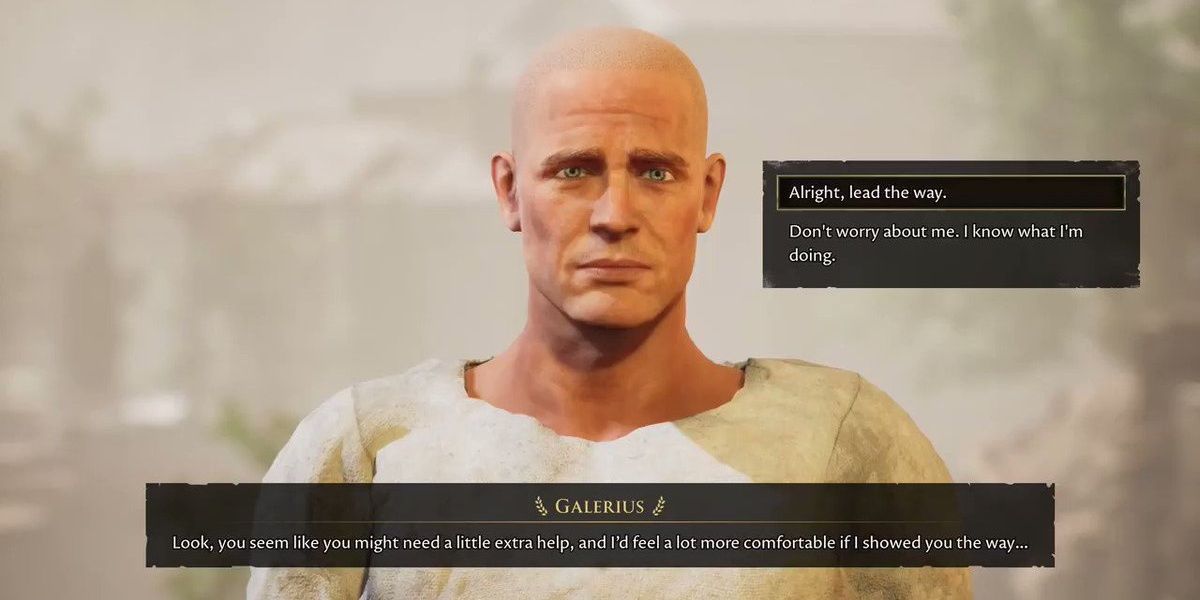 Luckily for you, the first person you meet when you arrive in the Roman city is Galerius, who is without question the nicest person you’ll encounter in this game. He’s a pure spirit that only wishes to help out where he can. Right away, Galerius offers to give you a tour of the city and personally escort you to Magistrate Sentius.

Not only does Galerius truly take The Golden Rule’s mantra to heart, but he’s also the only person who’s remotely civil to Duli. In fear of Duli stealing something because he was caught staring too long, Sentius imprisoned him. Yes, apparently we can jail people before they commit crimes. Anyway, by electing Galerius as the new Magistrate, he’ll release Duli from his captivity. And what does he do with his newfound freedom? Well, he only goes ahead and does what he was imprisoned for and breaks the Golden Rule. 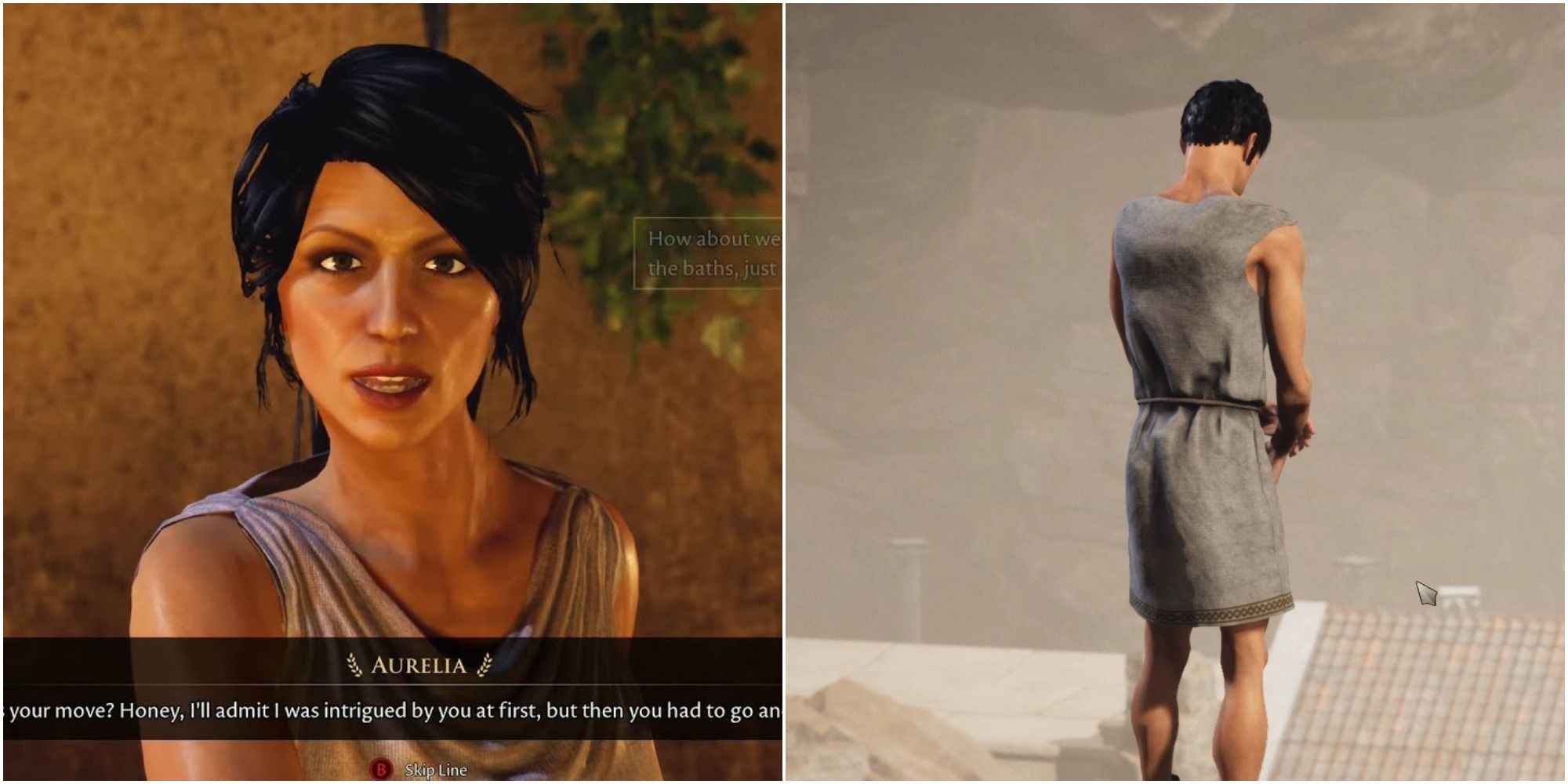 Unsurprisingly, you aren’t the first person who’s trying to escape the city. As you’re exploring, you learn that someone named Hannibal once tried escaping back through the aqueduct and the local tavern owner Aurelia might have some information on how to escape. But right away, it’s clear that not only is Aurelia a terrible human being, but she might also be responsible for Ulpius and Iulia’s work imprisonment to Malleolus.

If you venture up to the Great Temple, Ulpius is the one who’s right about to throw himself off said Great Temple. He tells you that he and Iulia made a pact to both commit suicide because they would never be able to work off the debt owed to Malleolus. After saving Iulia from the poison she drank to try and kill herself, you learn that Aurelia was the one who tricked the pair into borrowing a large sum of money to pay her for information on how to escape. Unfortunately for them, Aurelia lied and because she wasn’t technically in violation of The Golden Rule, they couldn’t do anything about it. 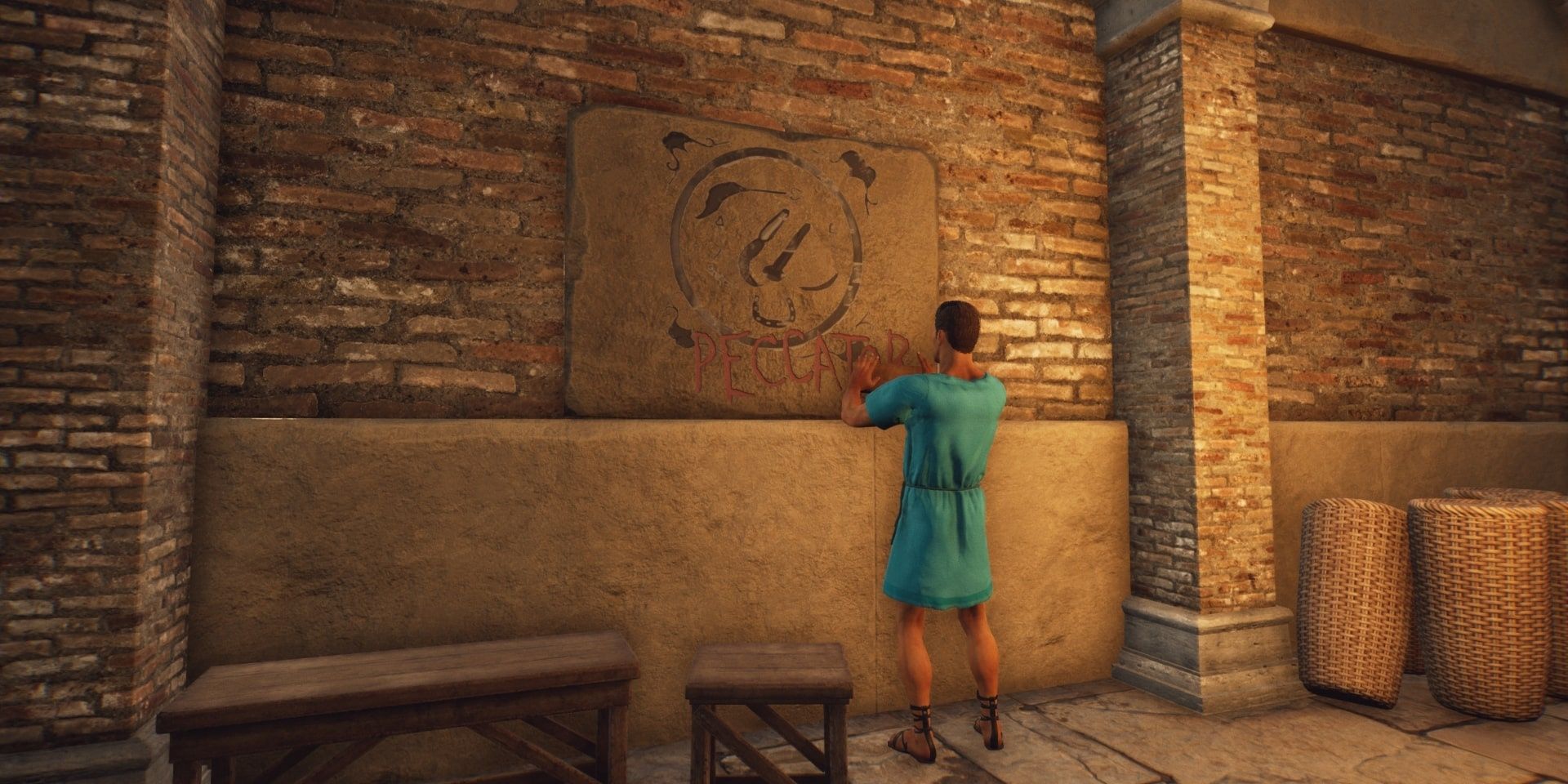 Among the marketplace shops is the architect by the name of Vergil. This delightful and polite man tells you his account of what happened before he arrived in the city and what he thinks of The Golden Rule. While speaking with him, you notice that there are hateful graffiti messages around the area. These messages are directed toward Vergil because of his sexual preference toward men and the person behind the disgusting threats believe Vergil will activate The Golden Rule.

Vergil knows a bit more information regarding the possible escape route through the aqueduct, but fears that if he speaks more on it the gods will become angered. You offer to find the culprit behind the hateful messages for Vergil’s information. Turns out, the person behind the messages was Rufius because of his close-minded religious views and strong symptoms of Rheumatism. Interestingly, if you complete the canonical ending and revisit the characters in the museum, you’ll learn that Rufius and Vergil now live together, implying that he was uncomfortable with his own sexuality. 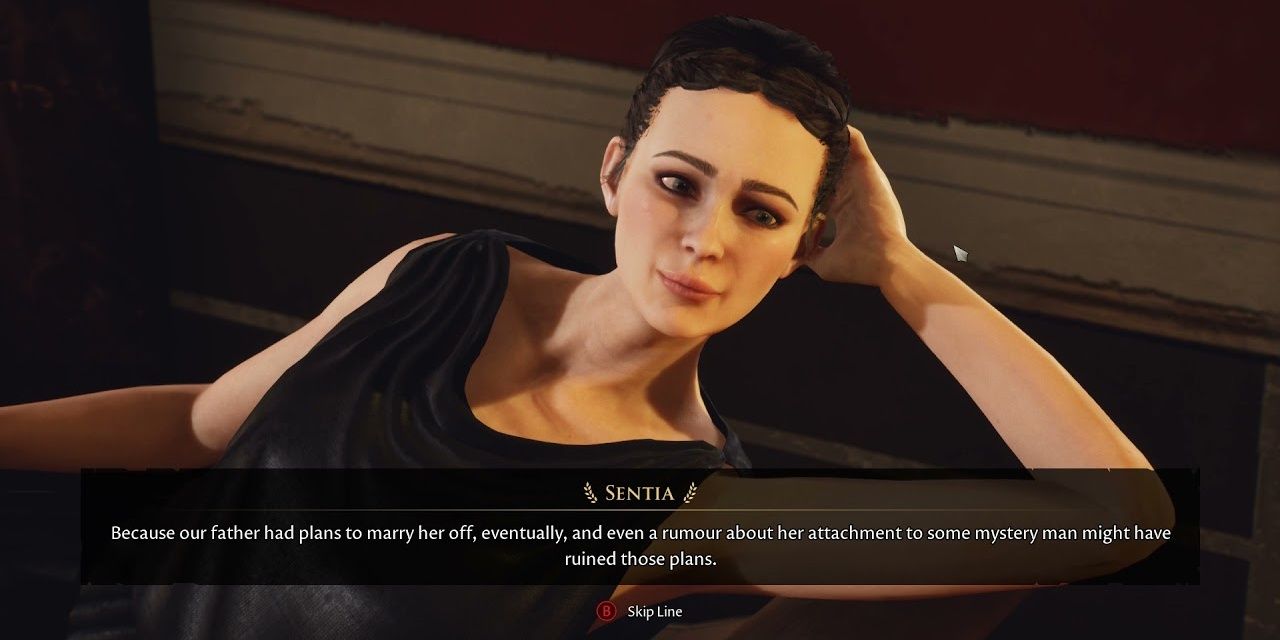 When you first arrive in the Roman city, you’ll learn that Sentius’s second daughter, Sentilla, has been missing for several days. It’s extremely strange that Sentius, being the Magistrate and all, isn’t that worried about his daughter’s safety. Some have accepted that she’s probably dead after trying to escape herself, which might include her lover, Ulpius.

In the first cycle, you’ll most likely fail in stopping Ulpius from falling to his death from the Great Temple, but after exploring more of the city you’ll discover that Ulpius and Sentilla were lovers. In the next cycle, you can save Ulpius from committing suicide by asking him if this is what Sentilla would’ve wanted. Maybe it’s a good thing no one knew about their relationship, because everyone would’ve assumed Ulpius kidnaped or killed her. 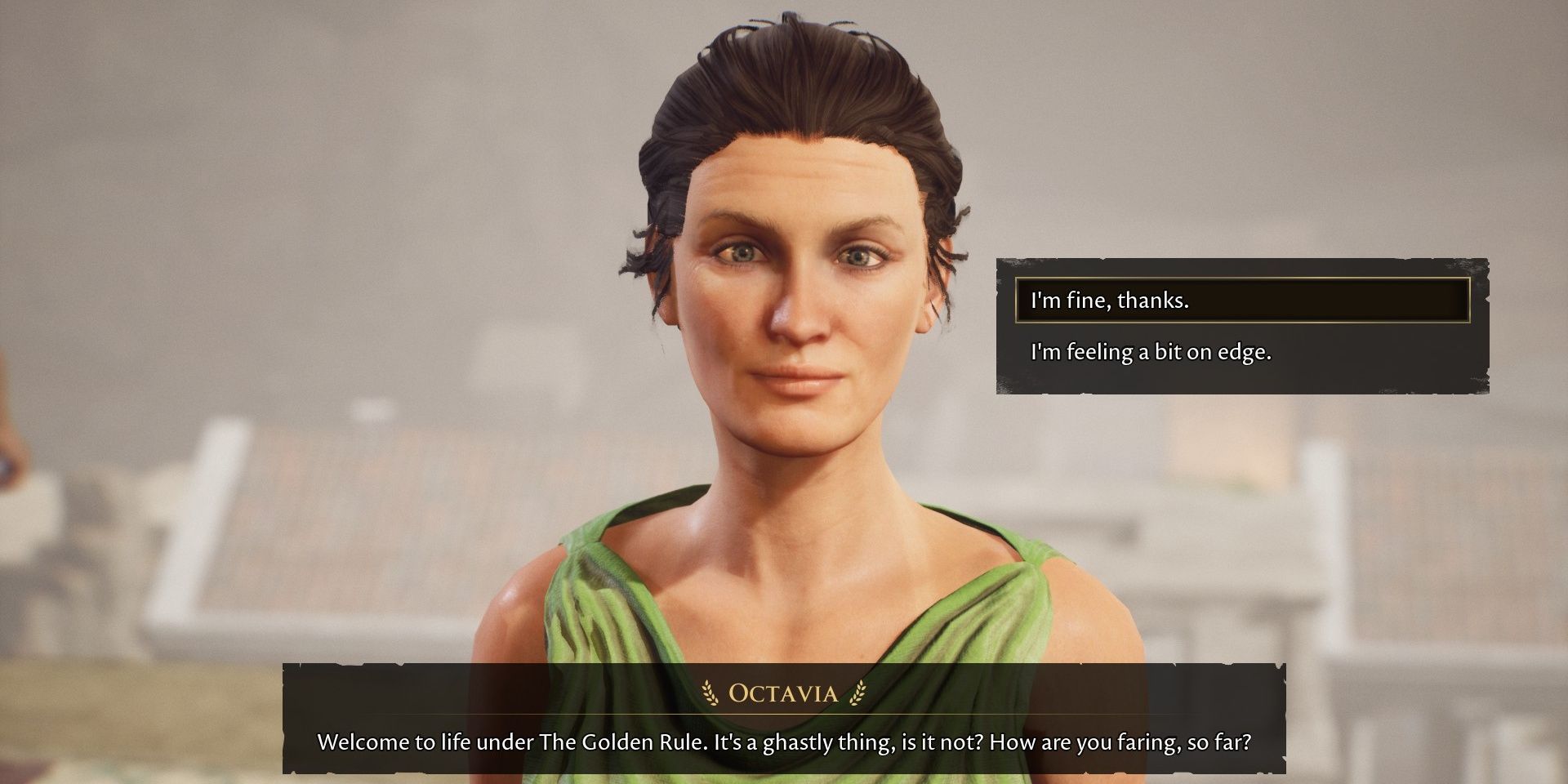 While exploring the city, you’ll hear people mention cultists and how there are some of them possibly living amongst everyone. Well, it turns out the cultists happen to be Christians as the wave of Christianity hit Rome. You discover there are actually three Christians that are living in the Roman city: Octavia, Rufius, and Malleolus.

When speaking with everyone about their last memories before arriving in the city, many of them mention a large fire and how it was started by cultists. The message of Christianity slowly made its way through Rome and early converters were suffered severely. If the Christians did start the fire, it might’ve been in response to endless discrimination and torture for their religious beliefs.

1 You Weren't The First To Discover The Underworld 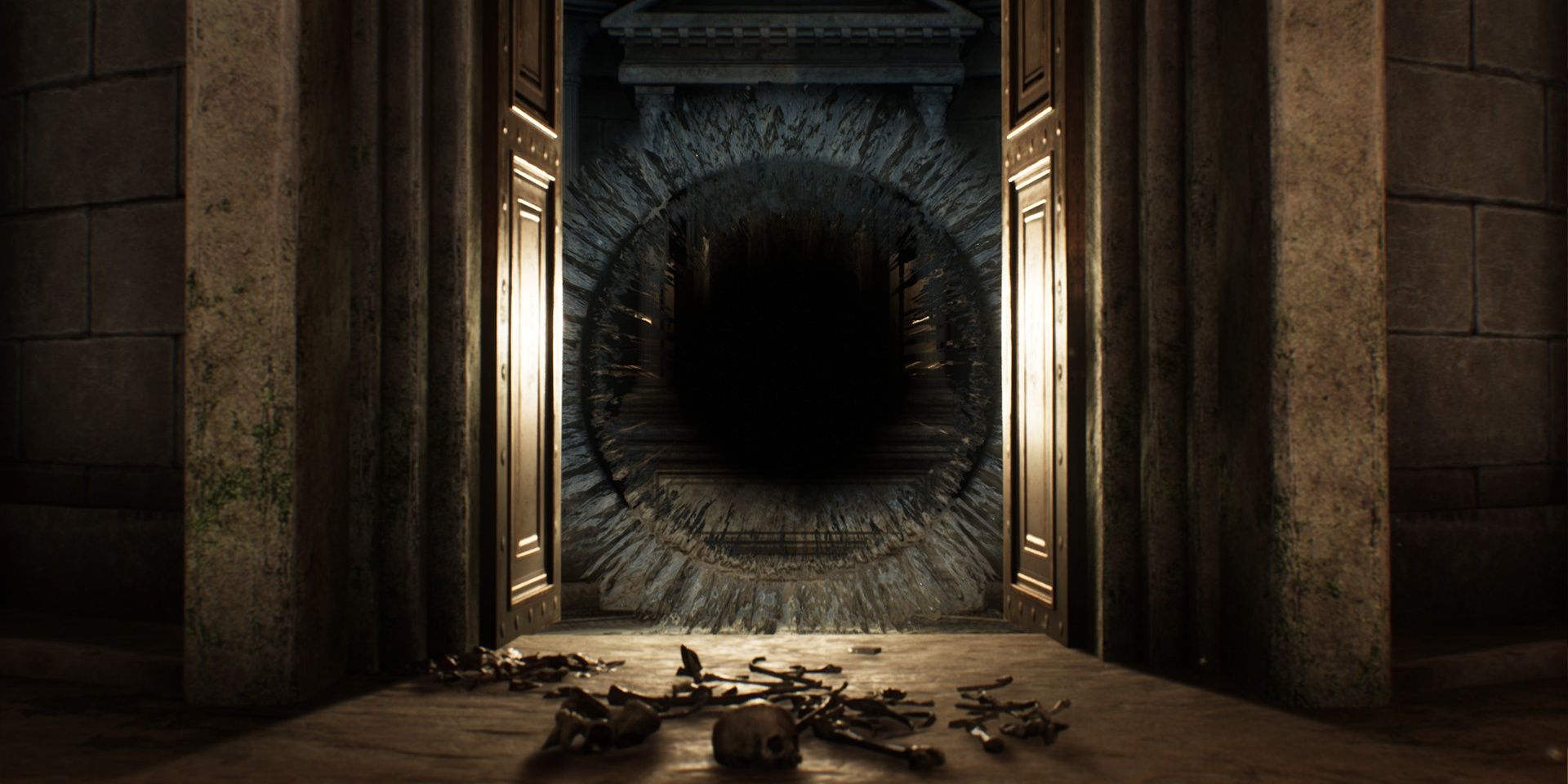 The big plot twist in The Forgotten City is you’re actually dead and in the Underworld. While this might certainly blow the wind out of your sails, you weren’t the first person to uncover the truth. Naevia, Livia, and Equitia (and the Hermit, but he’s somewhat of an exception) all in their own ways figured out something was amiss about the Roman city.

Equitia is one of the first people you encounter when you venture into the city, and she tells you to speak with everyone to gather more information on how they all arrived there. After speaking with everyone, she concludes that her theory of being in the Underworld is proven true. While Equitia has remained calm, despite figuring out she’s actually dead, the same can’t be said about Naevia and Livia. Both of them have in some way lost their minds. Livia shuffles around the city muttering ancient poems, while Naevia is holed up trying to peel the gold off various bodies because she hears voices.