The developers of The Unliving have done a great job at highlighting the design and personality of different NPCs that you meet as you raid in the game or stay in Edge of Immortality. While the game has a hint of pixel art, you can see how the NPCs look when you talk to them.

In the game, you play as The Necromancer and have the sole purpose of causing a disturbance in the human world. You also have to retrieve shards required for The Rite that are scattered across different areas like Burial Isle, Caredhwaithian Mires, and Sunspire. 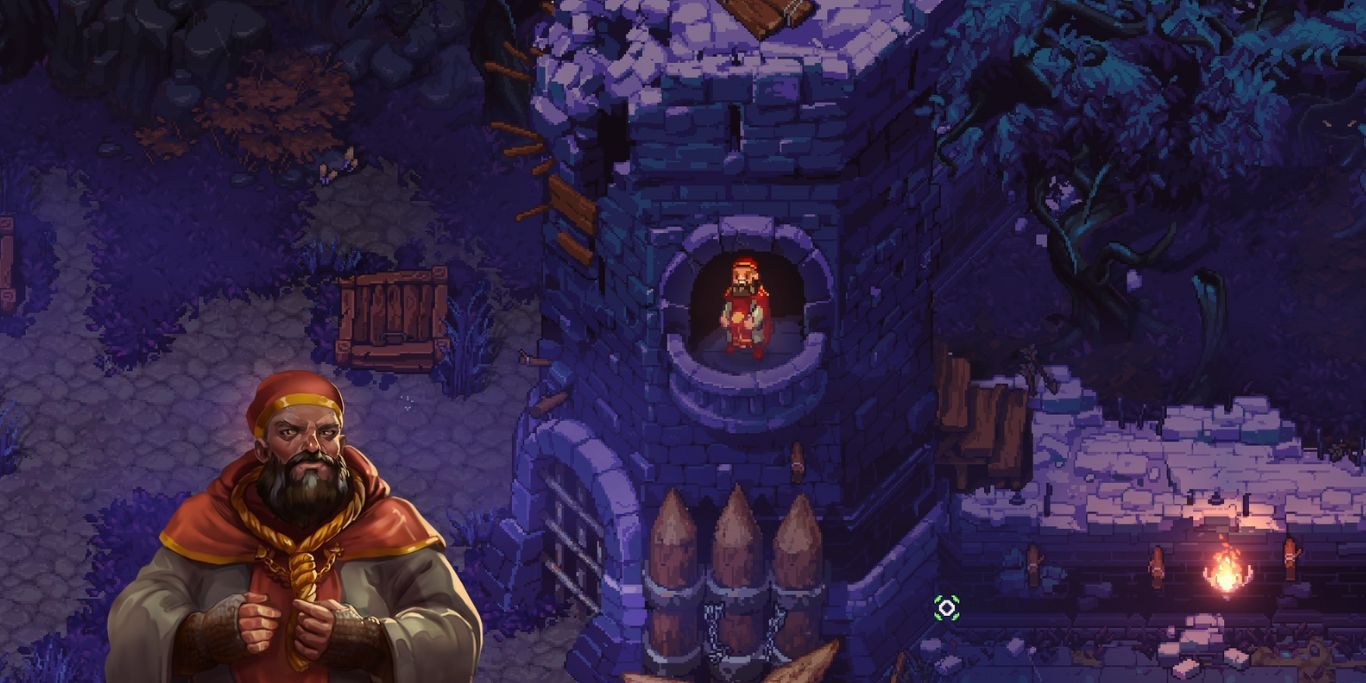 As you progress through the first area known as Burial Isle and reach the final fight, you'll meet the Inquisitor who will be guarding the massive barricades that cannot be broken by The Necromancer or the Undead. After listening to him praise the celestials and the living, you have to use Apotheosis and watch him being scared as you break everything.

The Inquisitor is ironically funny. He claims that he fully believes in the celestials, but doesn't even know about the harboring of monsters like Mirefolk and Ascended Alchemist in Caredhwaithian Mires. When he's confronted about that, he rejects the possibility and sticks to his position in the little hole. 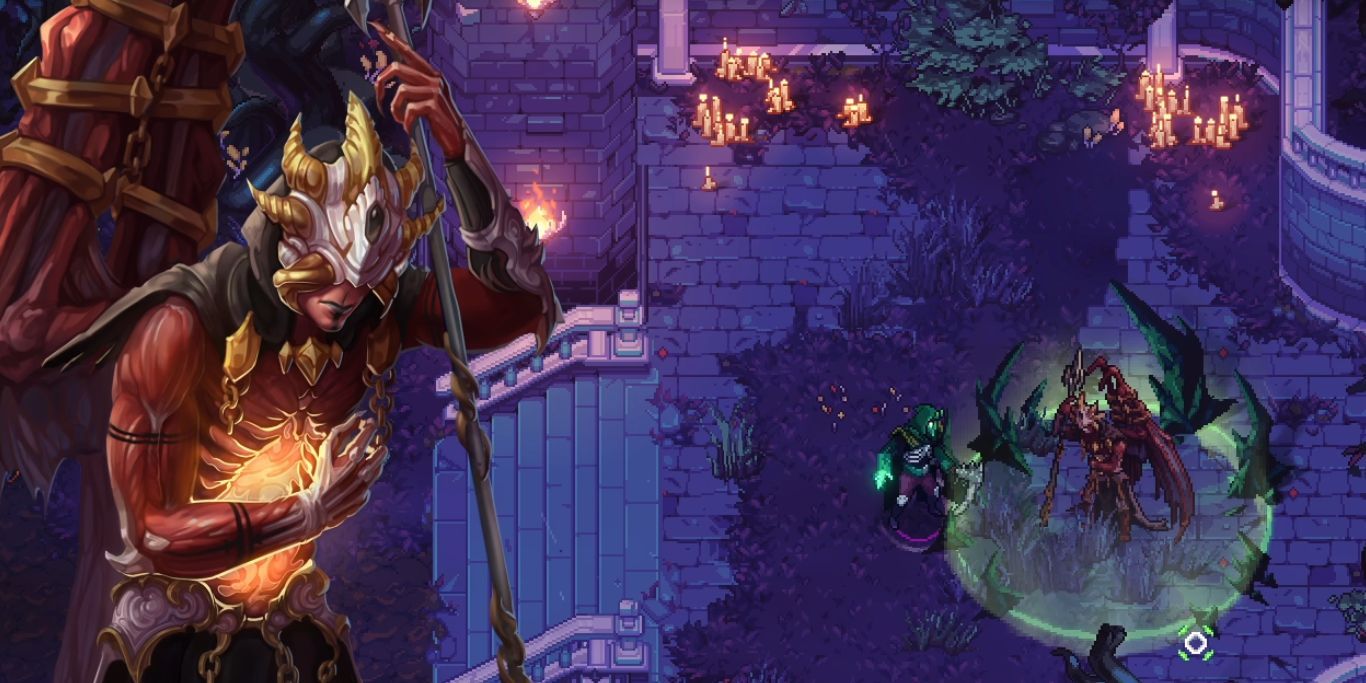 When you clear multiple areas in the game, you'll talk to multiple people and reveal the truth behind the world you're in. During the talks, you'll hear a lot of mentions of a flying celestial outside the coven. During your endeavors on Burial Isle, you'll meet Carius, The Fallen Angel, and realize that this was the flying celestial.

To find him, you'll have to go through one of the optional paths in the area where you can find altars containing Essence, Lifespark potion, Arkhe, Gold Chest, or Prima. He'll be guarding one of these altars and will ask you to sacrifice an entire Lifespark to go away so you can get a random Essence from the place.

Even though he's an enemy, it seems like The Necromancer and Carius have a special bond, and the former isn't happy with the latter being involved with celestials. 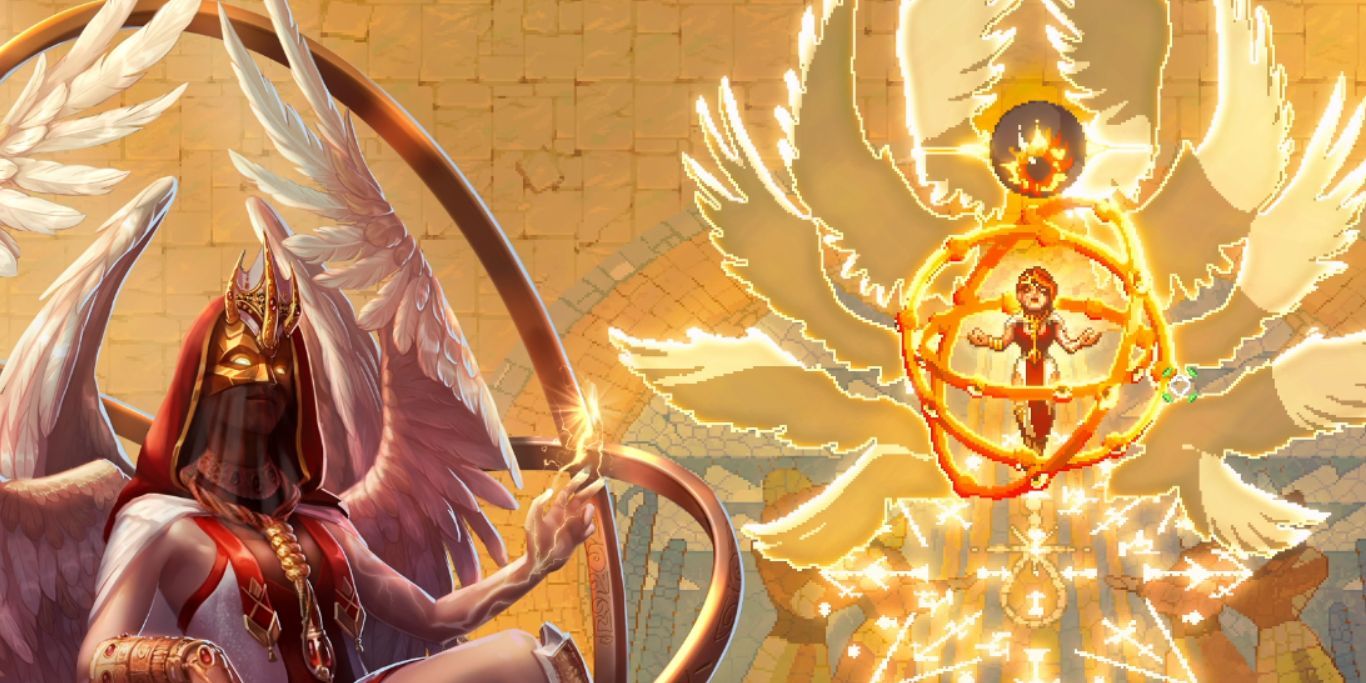 Unlike other mentions in the list, The Hierarch isn't necessarily an NPC in The Unliving. This is more of an honorable mention since she is the third main boss in the Sunspire region. Before starting the fight with her, The Necromancer will exchange a few dialogues asking her to release Caethuel.

One look at this character and you'll realize that she has a stunning and intimidating design. The back of her body has multiple wings, and there are rings surrounding her body that protect her from a lot of damage. While she's ready to give the required shard back to The Necromancer, she holds her ground when it comes to Caethuel.

It's a smart move on her part as she knows that The Rite cannot be completed without Caethuel. After not being able to avoid the fight, she shows her true elegance by giving players a hard time. 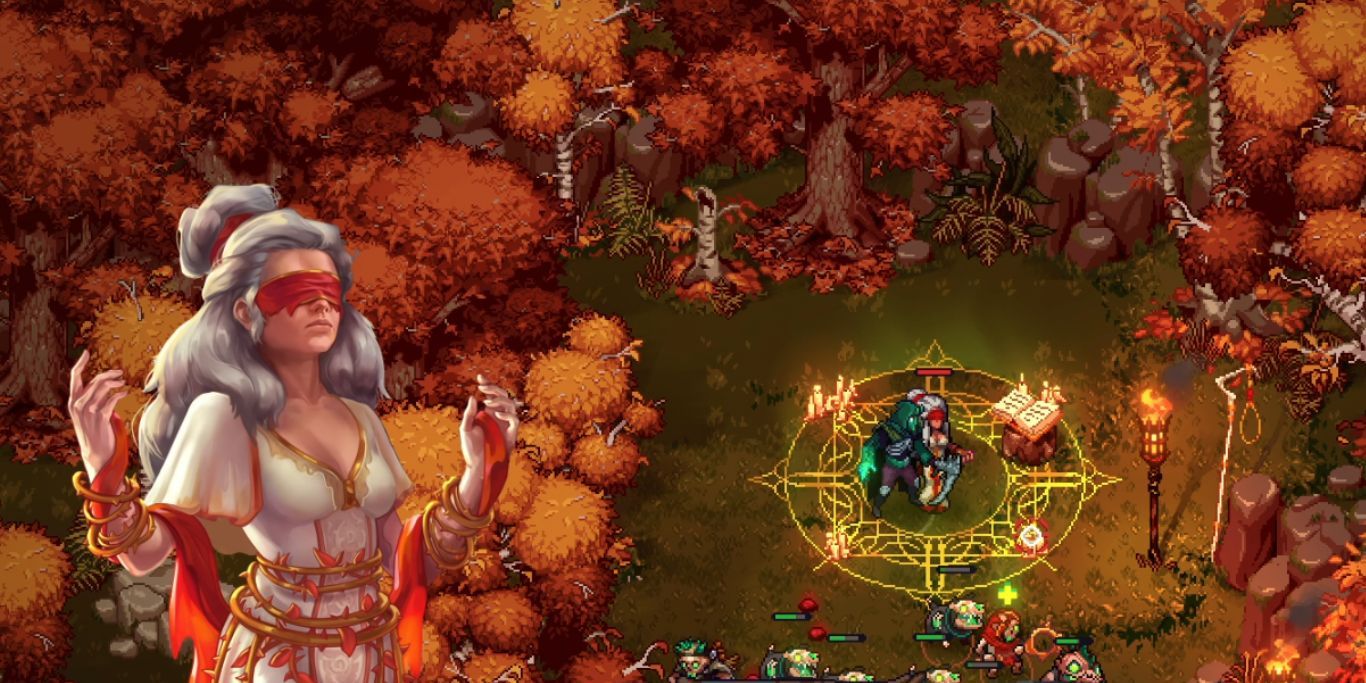 Another beautifully designed character, Zolar's Hermit can be found randomly while exploring the complicated areas of Caredhwaithian Mires. Similar to Carius, she has an entire altar dedicated to herself. Upon talking to The Necromancer, she'll display her unwavering support for Zolar as she refuses to move from the location.

You'll have to hit this lady to kill her and get an Essence in the process, but it doesn't come without a cost. The Necromancer will acquire a temporary curse after hitting her, showing that she will support the celestials until her last breath. 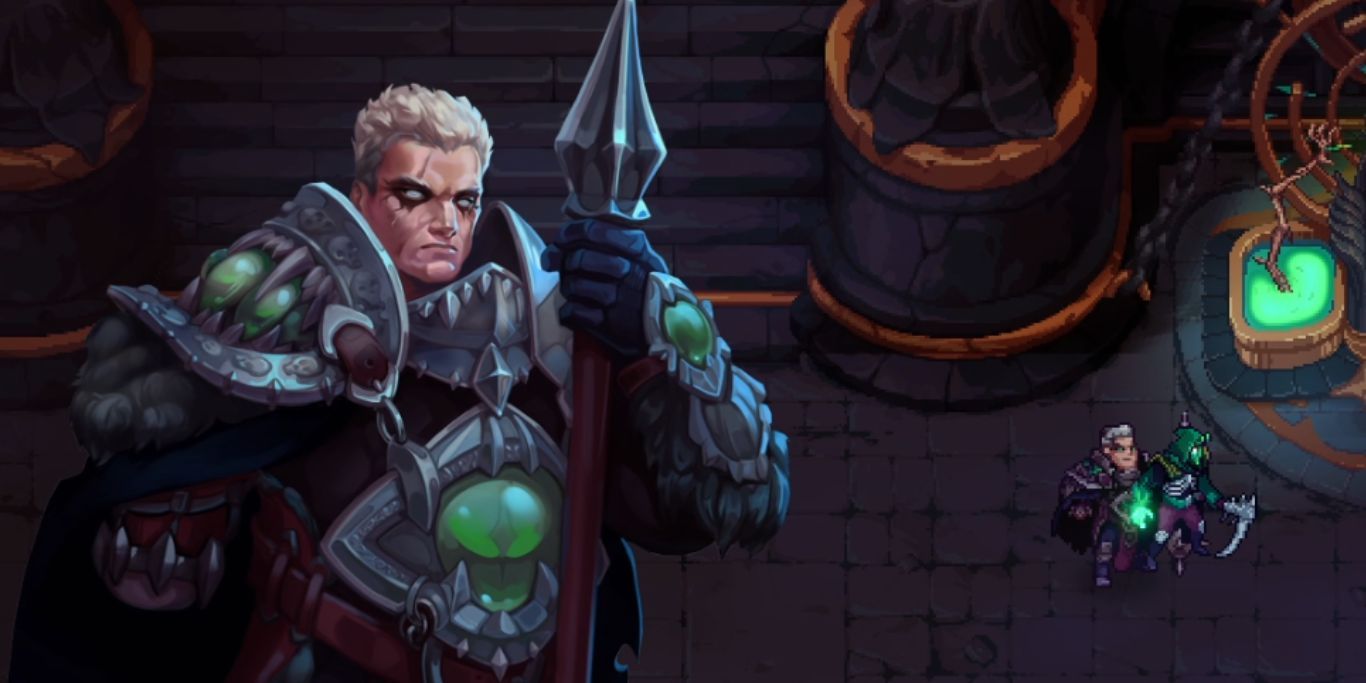 Every time The Necromancer falls in battle, he'll spawn back in the Edge of Immortality. This is the main base of operations where players can get different spells, sacrificial runes, and weapon upgrades. The Lieutenant is an NPC in this area that has aided Necromancer multiple times in battle before.

In fact, The Lieutenant doesn't feel bad about The Necromancer taking away his right arm. He used to be an egoistic individual, and The Necromancer felt like it was a necessity to take away his arm to put him into his senses. After finding the weapon table during your raid, this NPC will unlock the weapon upgrade function for you as well. 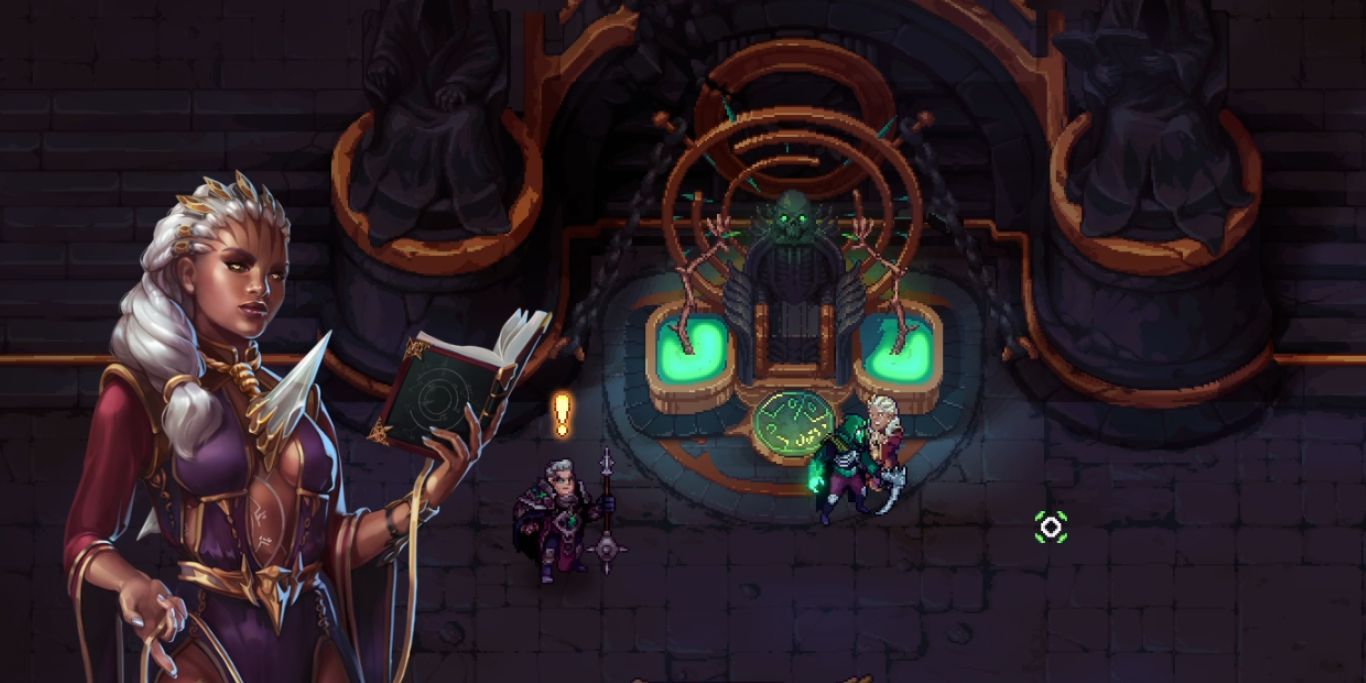 At this point, you must have already realized that The Unliving isn't short of beautifully designed characters. They might not strike as such when you look at them in the game, but talking to them shows true art. Majra is Necromancer's first student, and he has asked her for a lot of sacrifices.

When asked about the glass through her chest, she mentions that it was also done because of The Necromancer. After finding a few Lifespark Potions and progressing through the game, Majra will unlock many Lifesparks at her table. Once you've bought these Lifesparks, you can choose them randomly whenever you claim a potion.

Her job doesn't end there. Majra is also the main anchor whenever a shard is being applied to the portal at the top of Edge of Immortality. Necromancer doesn't have the power to control the process himself, and it would be impossible without her. 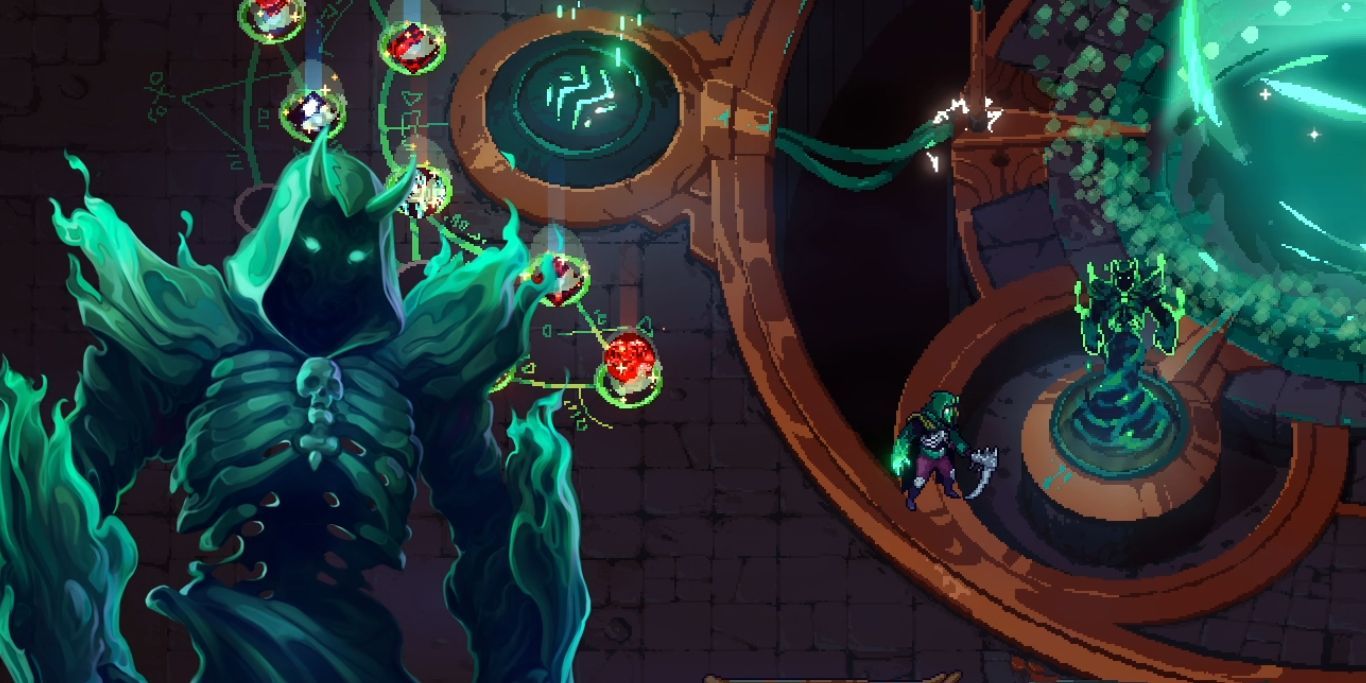 The shadowy figure that is revealed to be a part of The Necromancer comes first on this list. His job actively starts ever since the players go through the tutorial since he guides them through it even though he kills The Necromancer at the end. After reaching Edge of Immortality, it's revealed that The Necromancer and Phylacterium were separated during the failed Rite.

Not only does he hold the portal while The Necromancer goes through, but he also helps him figure out how to get shards from Apotheosis, Ascended Alchemist, and Supreme Hierarch. After you defeat these bosses three times, Phylacterium will help you place the shards near the portal.