Monkey see, monkey do, monkey roll! Super Monkey Ball has been around since the early 2000s. The first Monkey Ball game was actually an arcade title before rolling onto Gamecube in 2001. The games have spanned across a number of platforms over the past 20 years and there are no signs of them slowing down.

Some of the games are more well-known than others and that can be a measure of the success of a game. However, there are a number of other factors to think about when looking at which game is the best out of the series.

This article is focusing on ranking the game console releases of the Super Monkey Ball games, not the arcade or mobile versions. 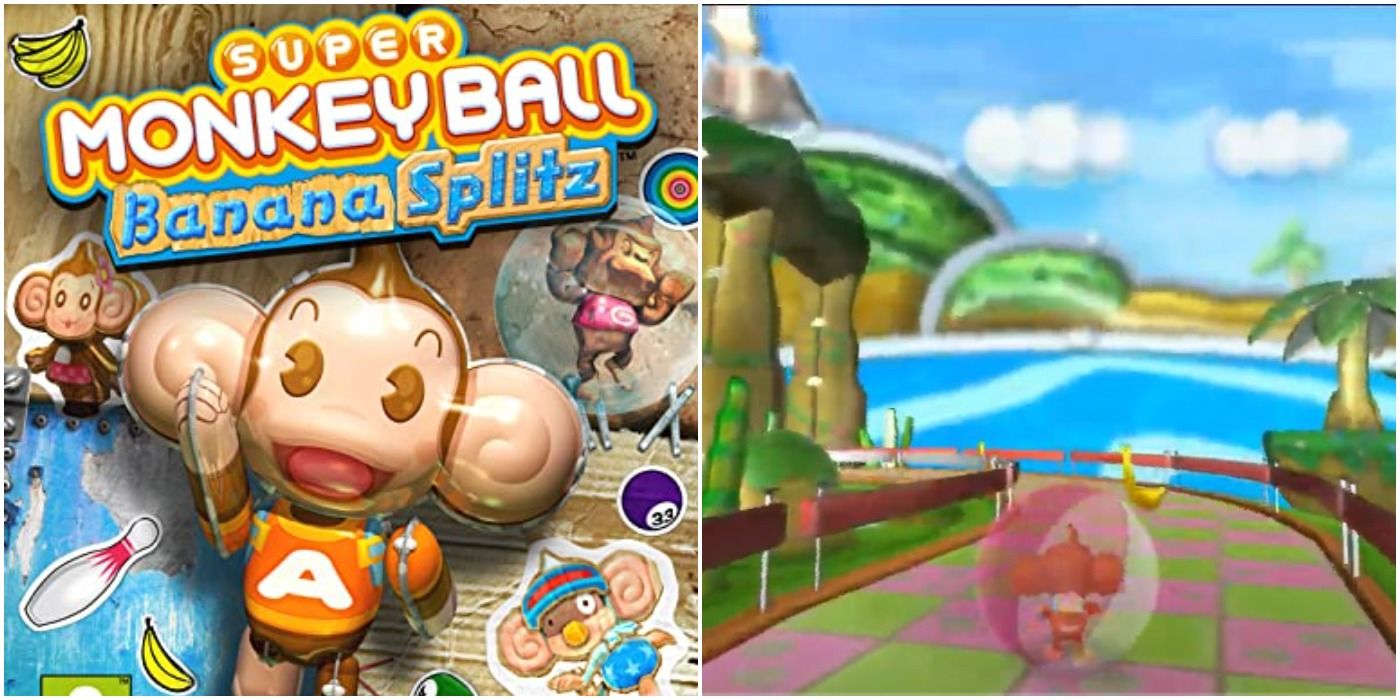 Banana Splitz was quite significant in the life of Super Monkey Ball. It was such a commercial flop that it was the last time a game in the series was designed and released for a single console. Every Super Monkey Ball title after this one is available on multiple consoles.

In comparison to some of the other games having three modes, this one only has two that you can choose from. Also, though it still has mini-games, there are still fewer than previously with only eight being available. However, the overall gameplay is good and keeps you on your toes, just like earlier versions. 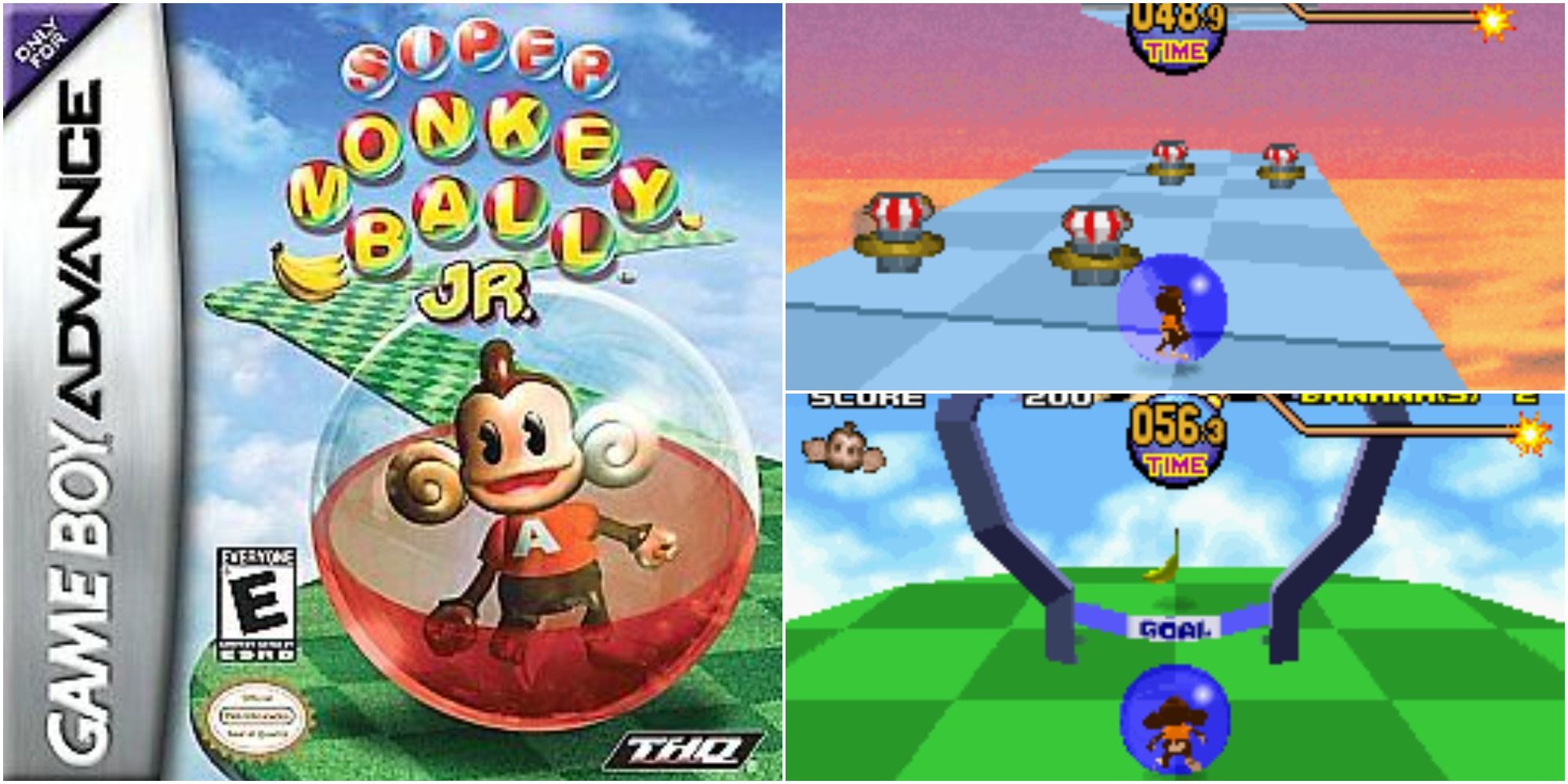 Super Monkey Ball Jr is the third console release of the series and the first handheld console release. The game itself is good and follows the same premise as all the others. You control a Monkey character in a ball and you’ll need to get around the courses, navigate to the end and collect bananas on the way.

The game gained pretty positive reviews upon its release. However, a lot of the levels were the same as levels from the very first game. Naturally, this disappointed a few fans who thought they were buying a new game. 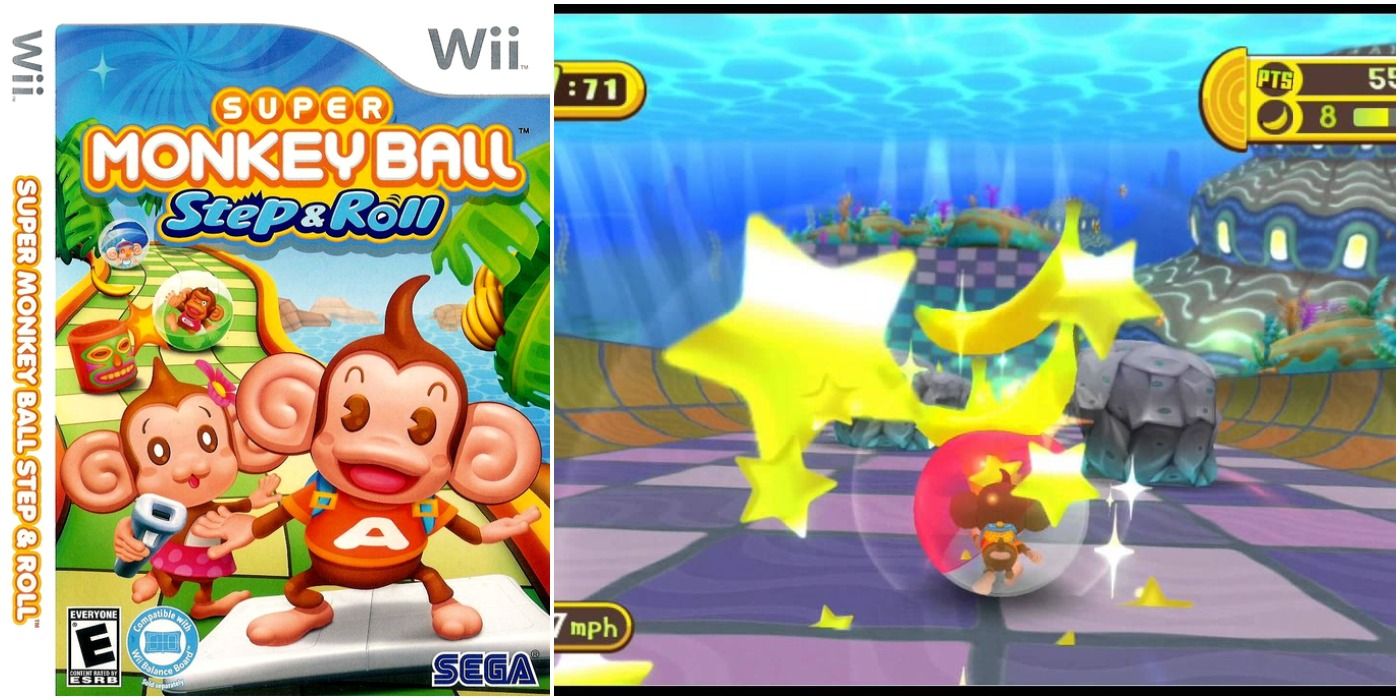 Step & Roll was the second game in the series to be released solely on the Wii console. The premise of the game remains the same; get the monkey to the goal before time runs out. This time you must use the motion control in the Wii remote to control your character and can even use the Wii Balance Board at the same time.

In this game, there are over 20 minigames for multiple players to sink their teeth into. It’s believed this feature was designed to try to make Super Monkey Ball a more social game. Overall, it was a much-loved addition to the franchise and to the Wii which has many little secrets of its own. 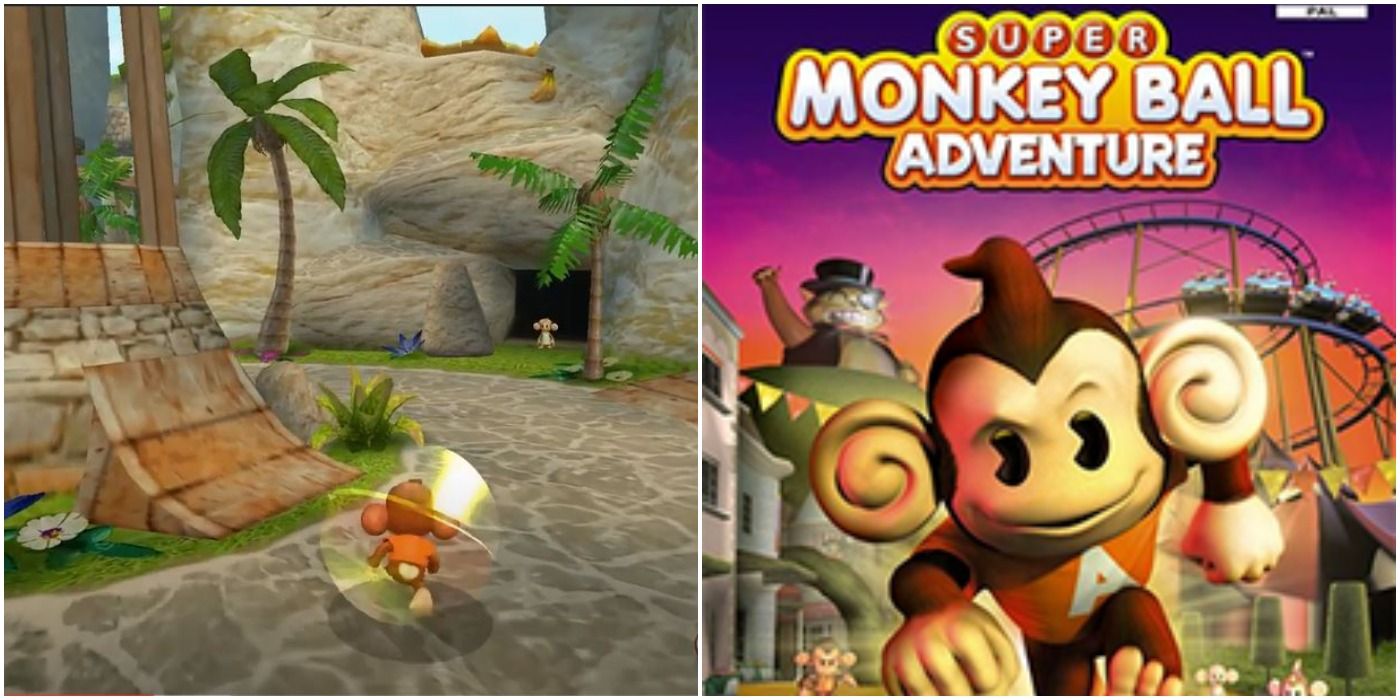 Super Monkey Ball Adventure had a slightly different premise to the other games in the series. Instead of having to control a Monkey through puzzles and a labyrinth, you help them to explore 3D islands. There are also challenge modes and party modes that you can choose to play.

There are still puzzle elements throughout the game for you to solve however the main objectives are for you to complete different tasks in each section. Your goal is to help bring about the biggest wedding the Kingdom has seen. The premise of the game itself was good, however many fans were not happy that the original format had been strayed from. 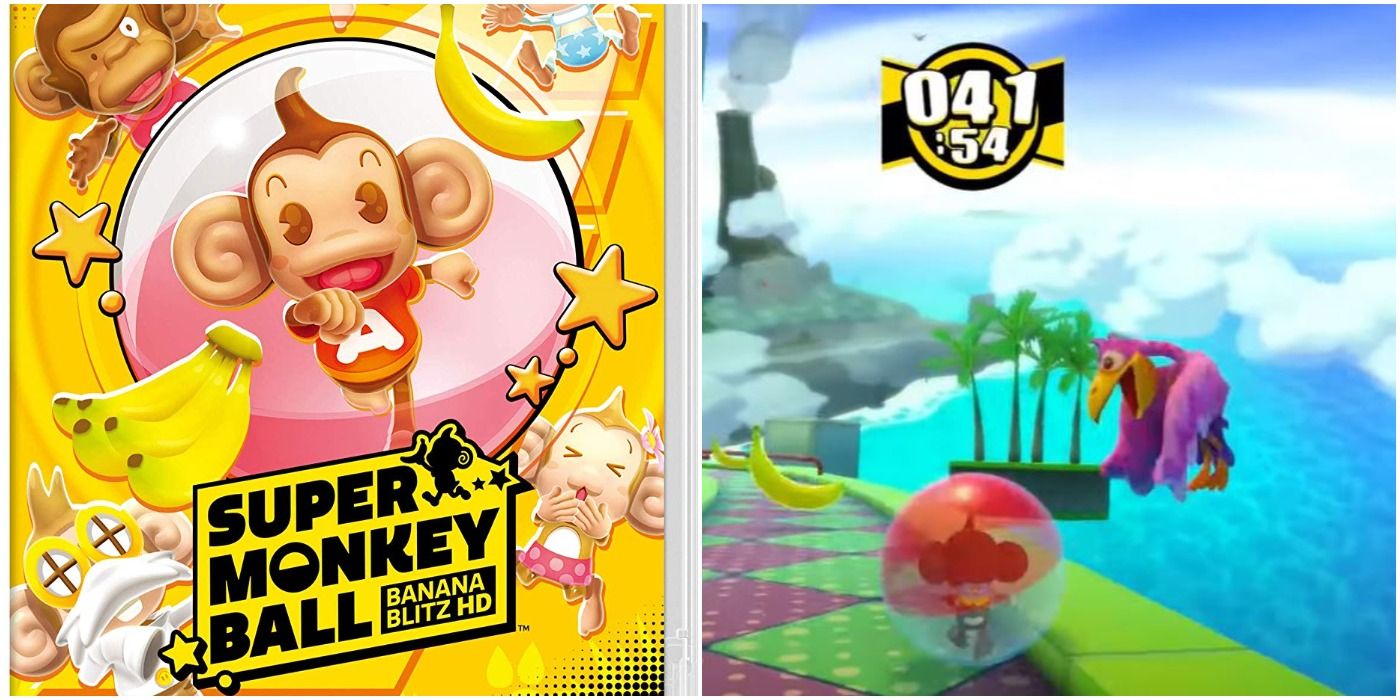 This game is not higher on the list as it is actually a remake of the original Super Monkey Ball Blitz game with a few modern re-vamps added to it. The remake did a brilliant job of enhancing the controls to suit each console’s controller as the original game was solely made for the Wii remote.

The original version of the game had 50 minigames that you could do if you didn’t feel like doing the main story. In the remastered version, there are only ten of these mini-games and it seems that they were chosen as they were the most popular ones amongst fans. However, some players found this game frustrating and this lowered how positively they thought of it. 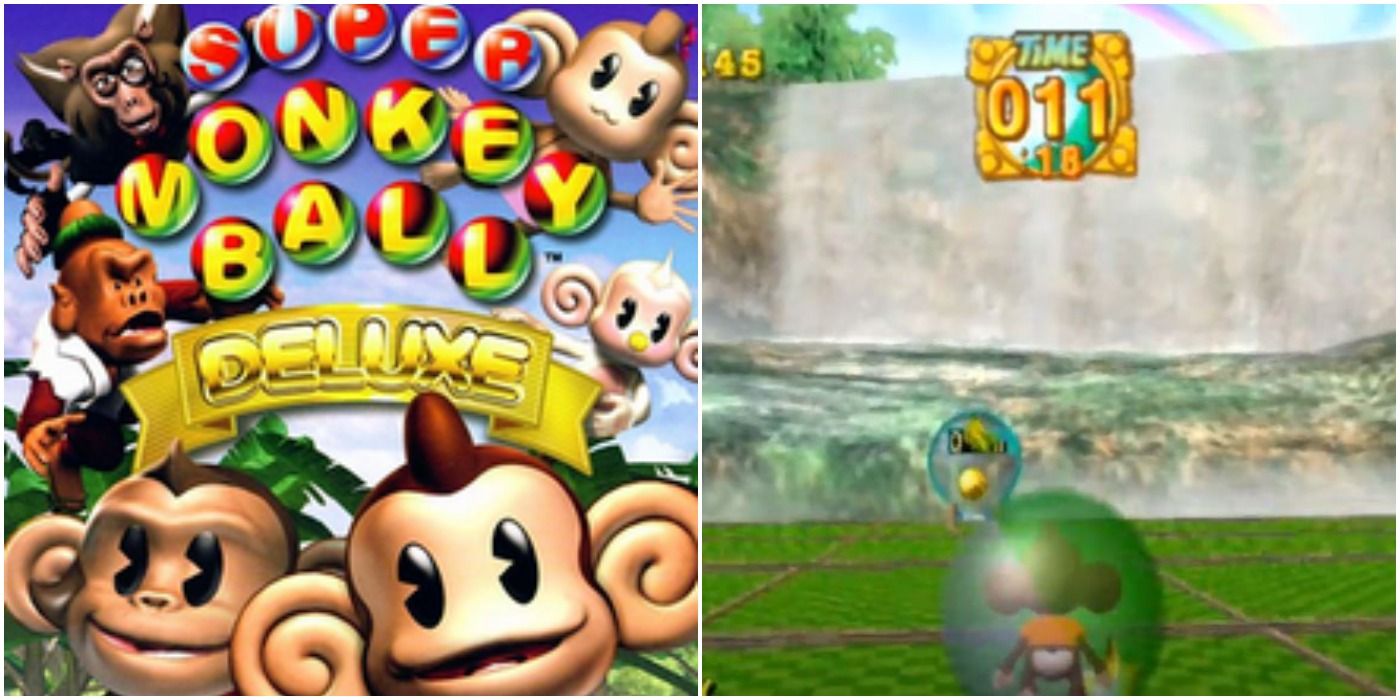 There are 12 mini-games available and up to four people can play them at once. There are also three modes that you can choose from in the main section of the game; Main Mode, Challenge Mode, and Practice mode. The main criticism of the game was the lack of online play, but at the time it was released, online play was still finding its feet in the gaming world. 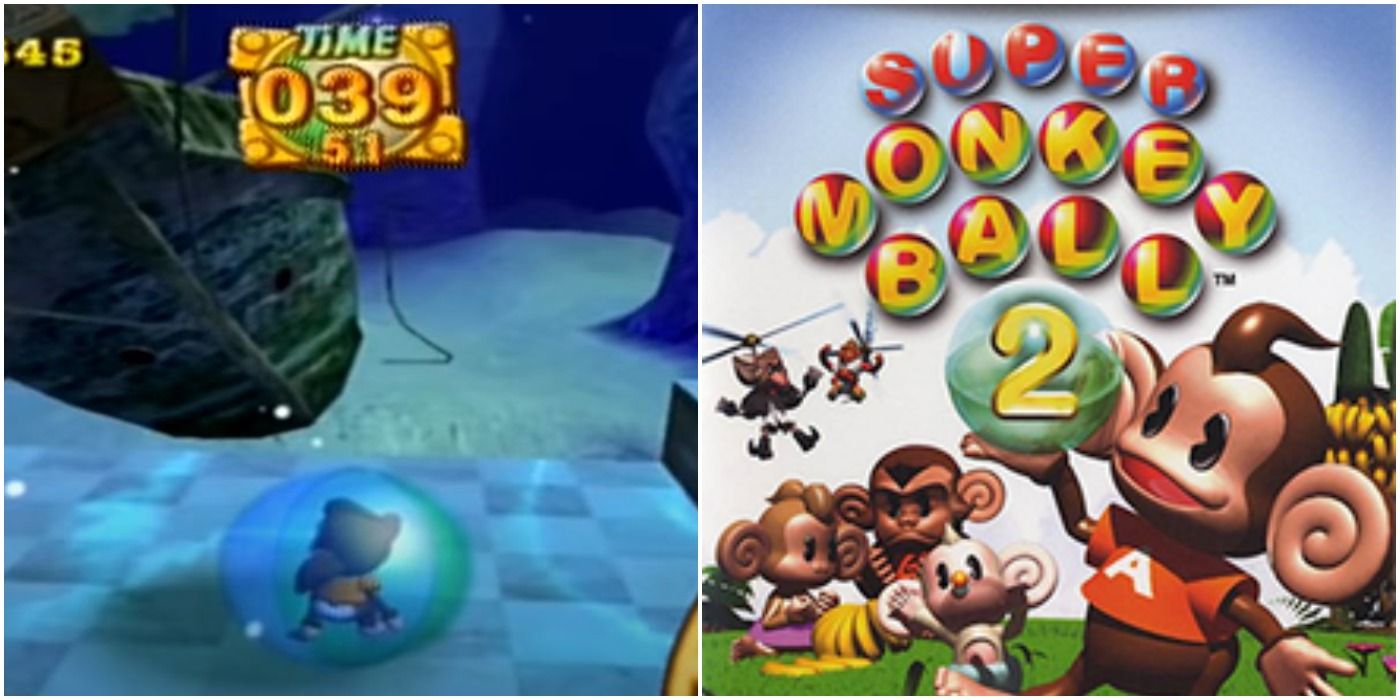 Super Monkey Ball 2 was the second installment in the franchise to be released on a console. You can use the controls stick to actually tilt the levels themselves to control where the Monkey rolls. There are 12 party games in this game and half of them were featured in the original version.

What mode you play will change how many people can play with you. If you choose to play story mode where the monkey foursome face-off with Dr. Bad-Boon, then only you can play. However, if you choose Challenge mode or Party games then up to four of you can play together. 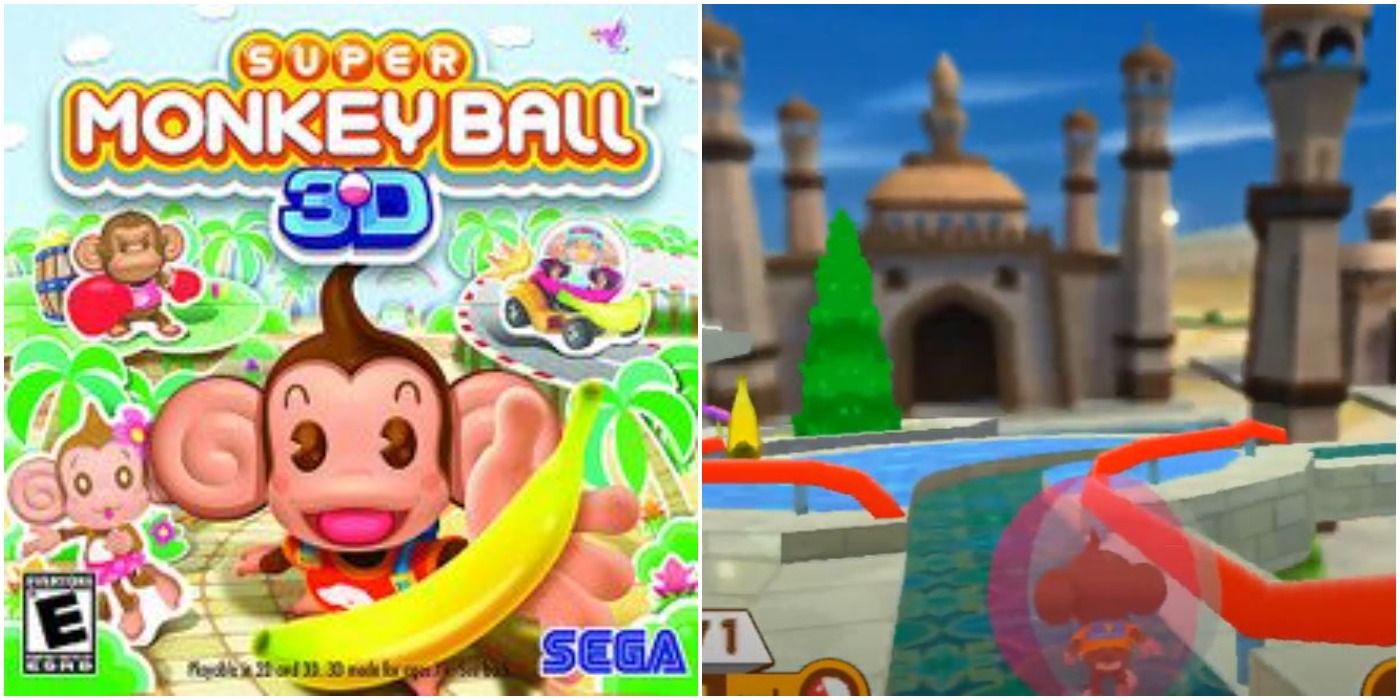 Super Monkey Ball 3D was released only for the Nintendo 3DS. The game has three modes that you can choose from. One of them is the main mode where you can tackle the classic Monkey Ball puzzles. The next one is Monkey Racing where you can speed around a track and race other primates. The final mode is called Monkey fight and essentially, you fight each other.

Monkey Fight and Monkey Racing can be played with other people, as long as you have the ability to connect to them wirelessly. There was slightly controversy over this game as some believed that the racing mode was a direct copy of Mario Kart and thus they believed the game was lazily designed. 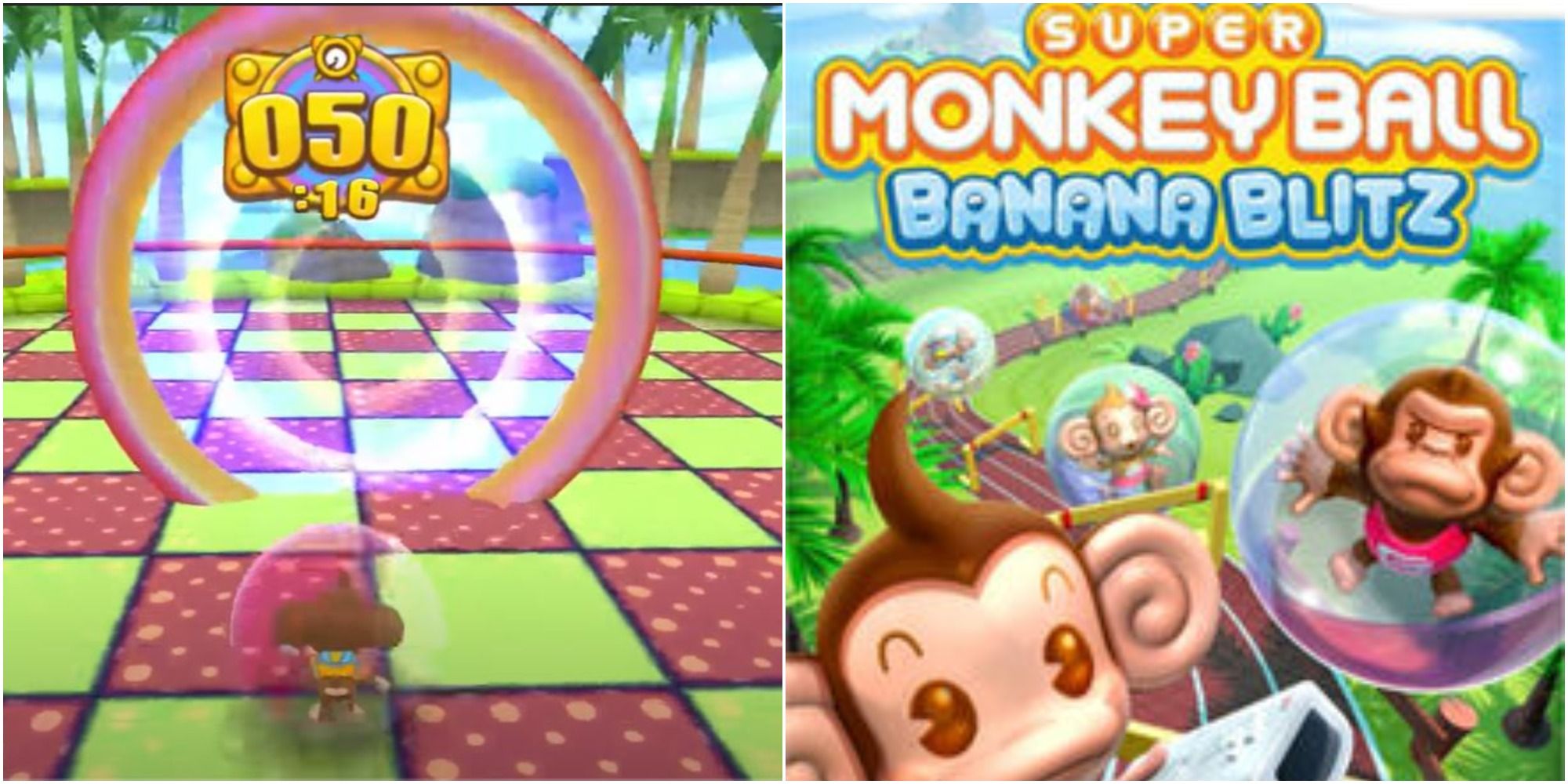 Everyone’s favorite Monkey characters made a spectacular return to a brand new console in 2006 with Banana Blitz. The game features a whopping 100 levels of main mode puzzles for you to get your head around. If the main mode wasn’t tricky enough, you get 50 minigames that all have unique uses for the Wii remote. This game also introduced boss battles into the main game.

The party mode works slightly differently from its predecessors. You can choose the mini-games that you want to play and compete to gain the most points through winning them. The success of the game can be seen through the fact there was a remake of it in 2019. 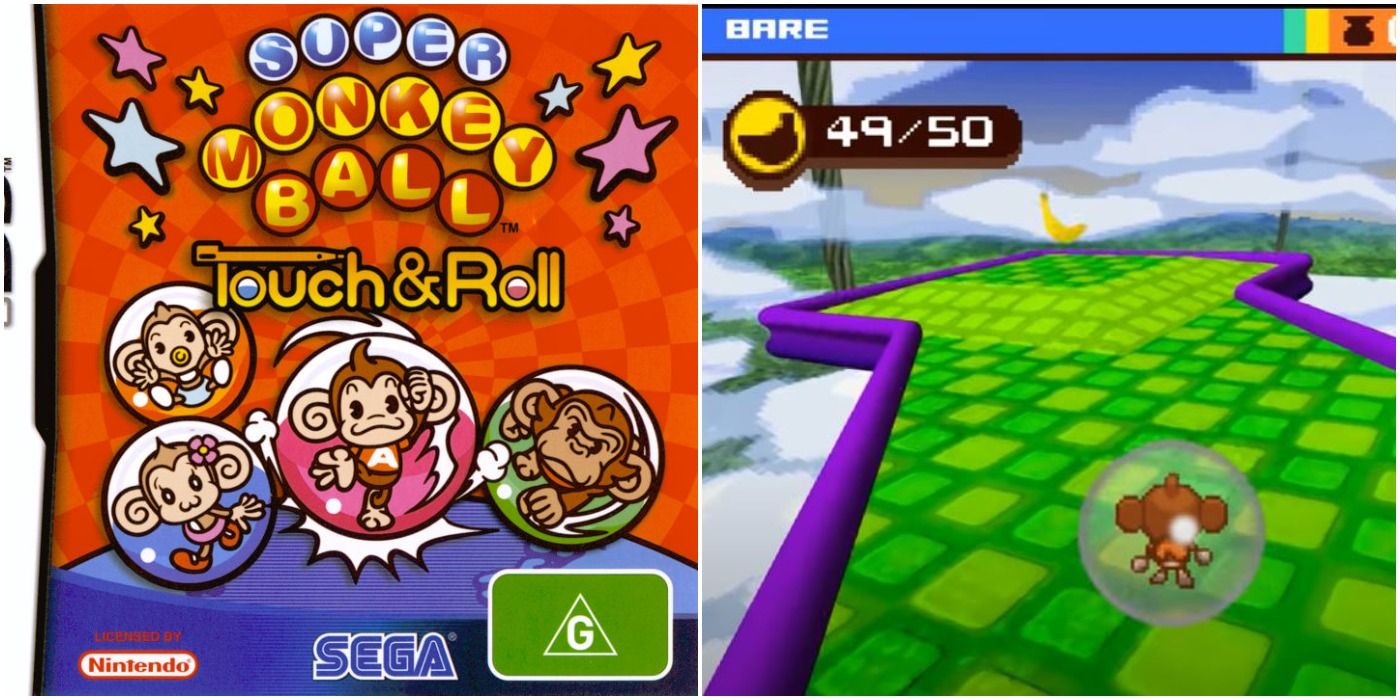 Touch And Roll is probably the game that most people think of when you say Super Monkey Ball. Even though it only has two modes, party mode, and main mode, the game was loved the world over. Though the critics were not as kind to the game, fans of the franchise across the world seemed to really enjoy it.

Being able to use the stylus and the touch screen to control your monkey was, and still is, extremely satisfying.  You can also use the D-pad controls if the touch screen becomes too fiddly. It definitely adds a challenging element to the game as you have to be really skilled to control where your character goes. 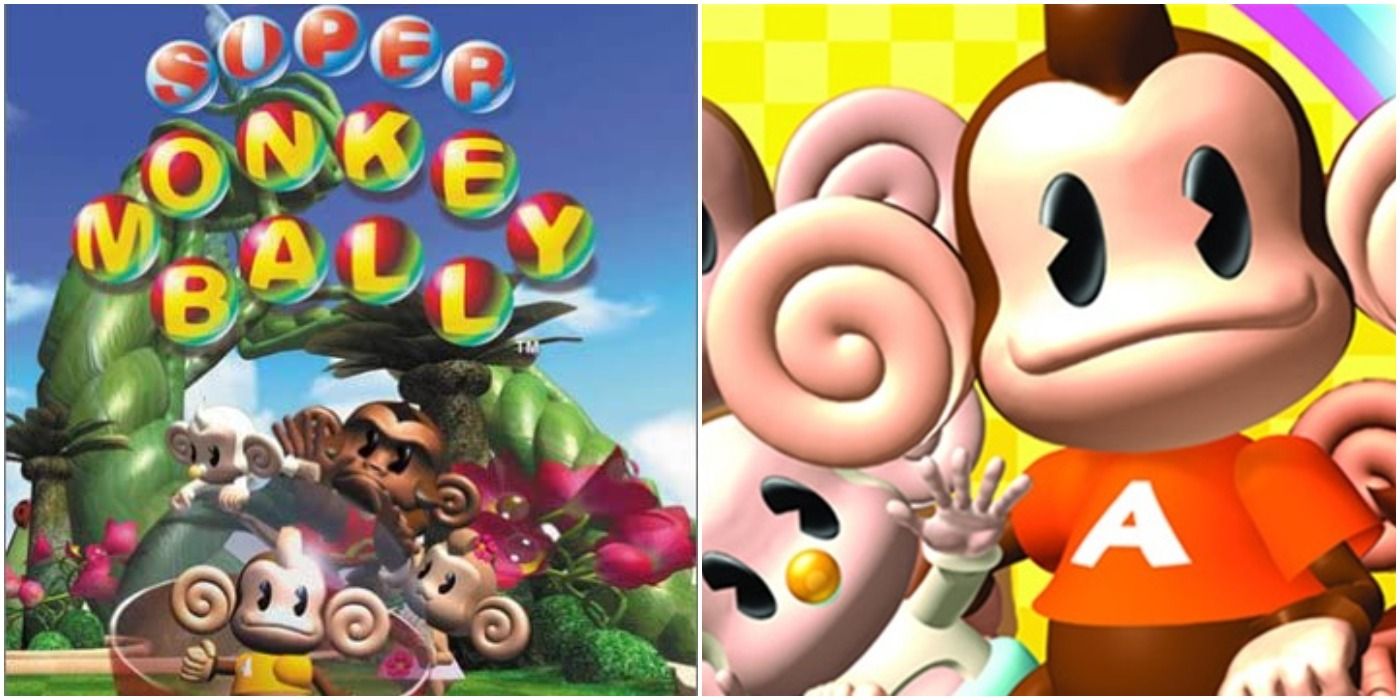 The first console game in the Monkey Ball series is arguably the best one there is. Although the more recent editions of the game have brought the series up to modern gaming standards, there will always be something perfect about having a nostalgic and original version of a game.  This version paved the way for the rest of the games in the series.

There are three party games in the game and three mini-games. This is the least amount of mini-games throughout the series. However, they were popular enough to be repeated in the sequel to this game. One thing is for sure, this game created a series that is still going strong today.