The big chip maker announced non-GAAP earnings per share was 32 cents on revenue of $2.13 billion. Analysts expected EPS of 31 cents on revenue of $2.11 billion. The revenue bump came from computing and graphics sales, partially offset by lower enterprise, embedded, and semi-custom chips. The latter includes chips for video game consoles, which are being refreshed later this year.

That sets up a big question as to whether AMD is gaining market share on Intel has it has for the previous eight quarters, or if Intel has stopped the losses and is taking some market share back. Bob Swan, CEO of Intel, said last week that Intel is regaining share in his own earnings call. The last time I checked, both companies can’t be gaining share in a two-company market.

In after-hours trading, AMD’s stock price is down 3% to $48.79 a share, presumably because AMD’s outlook for the first quarter isn’t as strong as analysts expected.

Santa Clara, California-based AMD is benefiting from a rare advantage in chip design over archrival Intel, which has been slow on both the manufacturing and design fronts to come up with a processor that challenges AMD’s Zen and Zen 2-based designs.

AMD CEO Lisa Su said in a statement, “2019 marked a significant milestone in our multi-year journey as we successfully launched and ramped the strongest product portfolio in our 50-year history. We delivered significant margin expansion and increased profitability as we gained market share with our Ryzen and EPYC processors. Our focused execution and the investments we made in our high-performance computing roadmaps position us well for continued growth in 2020 and beyond.”

Following up on similar announcements in August, AMD revealed its Zen 2-based Ryzen 4000 mobile processors and 64-core Threadripper processors at CES 2020, the big tech trade show in Las Vegas earlier this month.

AMD’s 7-nanometer Epyc chips are expected to be used in datacenter applications such as the Google Cloud Platform.

Market share figures for the fourth quarter aren’t available yet. For the third quarter ended September 30, AMD had 14.6% share of the overall x86 processor market, up 4 percentage points from a year ago, according to market researcher Mercury Research. 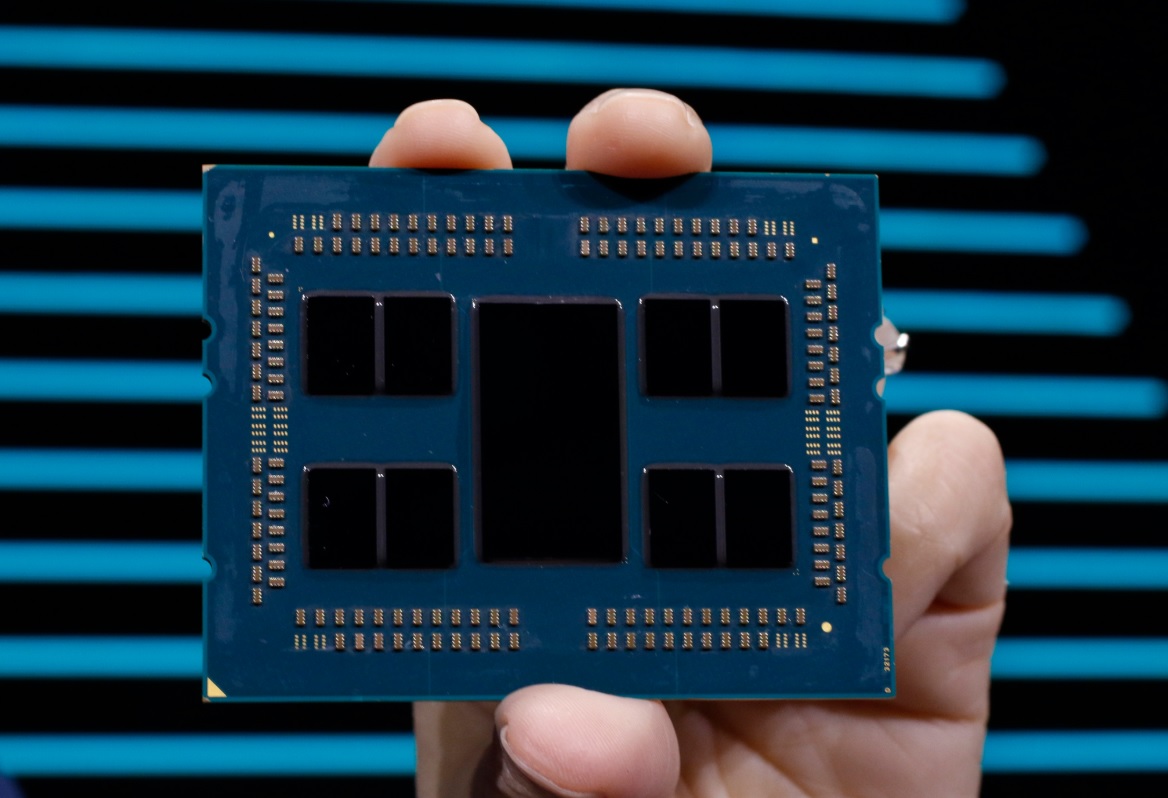 Non-GAAP revenue for the fourth quarter was $2.13 billion, up 50% from the fourth quarter of 2018, and up 18% quarter-over-quarter due to higher revenue in the Computing and Graphics segment, partially offset by lower revenue in the Enterprise, Embedded, and Semi-Custom segment. The Ryzen processors and Radeon graphics processing units were the best selling products, and average selling price was up compared to a year ago.

Profits were up thanks to sales of higher-margin products. AMD now has about $1.5 billion in cash, compared to $1.21 billion in the prior quarter. It also paid off about $524 million in debut, resulting in a GAAP loss of $128 million.

Enterprise, Embedded, and Semi-Custom segment revenue was $465 million, up 7% year-over-year, thanks to higher Epyc processor sales. Semi-custom sales were down from the prior quarter. During the quarter, AMD was ramping sales of its Epyc processor for servers.

“AMD had a very solid Q4 and record revenue for 2019. Highlights for Q4 2019 included an incredible 50% revenue growth driven mostly by Ryzen desktop and laptop and Radeon discrete graphics which was up 69%,” said Patrick Moorhead, analyst at Moor Insights & Strategy. “The company said it had ‘strong EPYC sales’ which I believe grew triple digits. Game consoles down a lot which is natural given Microsoft and Sony’s schedules for the next generation consoles. AMD guided to 42% quarterly growth which is well above market growth which is the low single digits.”