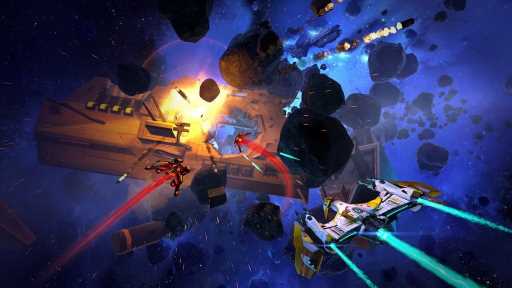 OZWE Games’ Anshar Wars 2 was a firm favourite of early virtual reality (VR) adopters, originally released for Samsung Gear VR in 2015 followed by Oculus Rift a year later. This week the studio has teased the first details of its return, with footage of Anshar Wars 2 running on an Oculus Quest 2.

The Swiss studio released the short gameplay video via Reddit, showcasing the title is very much up and running whilst confirming some features as well as tweaks made to the original experience. For instance, the Gear VR version had head-based movement controls so that players didn’t need a gamepad to control the spaceship. As you can probably tell from the video, alongside the studio confirming it, Anshar Wars 2 will have a new control scheme to tightly navigate all those asteroid belts.

Explaining the change the team note: “on Quest, you control the ship with one hand and aim the missiles with the other, while your head is free to look wherever you want.” It certainly sounds like Anshar Wars 2 will better cater to modern VR equipment, going for that handheld, toy spaceship approach that has been popularized by titles such as YUKI.

Another bit of good news is that the multiplayer feature will also return, so you’ll be able to fly missions solo or co-op. There’s still plenty of unanswered questions as well, whether OZWE Games plans on expanding the seven-year-old title with new content and as there’s already an Oculus Rift version, will crossplay and cross-buy be supported?

There’s been no indication of how long the project has been going and what sort of launch window the studio is planning. But it’s great to see one of the first big VR games making a return, finding a brand new audience on Oculus Quest.

OZWE Games’ last videogame was combat racing title Death Lap, which hit Oculus Quest in 2019. It didn’t quite spark the same magic with VRFocus’ review noting: “Death Lap has some great elements to it, instantly offering exciting races where you can throw caution to the wind, drive like a maniac and shoot stuff. Unfortunately, there is a lack of finesse and polish to the whole experience.”

As the studio release further info for Anshar Wars 2 on Oculus Quest, VRFocus will let you know.