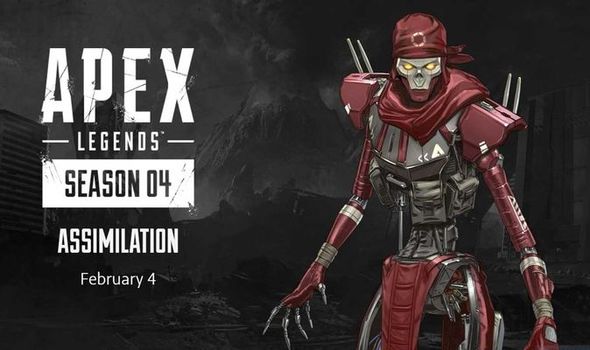 Respawn continues to tease the big changes coming in the next Apex Legends update in February. As many fans will already know, Apex Season 4 is releasing on Tuesday, February 4, 2020, meaning the launch of the new patch isn’t far away. And more news is scheduled to be shared later today, ahead of the Apex Legends update time. Respawn has been busy over the weekend sharing more about what is coming next in the Apex Legends storyline. We’ve learnt about the new character Revenant, who will be joining the roster as part of Season 4.

And we even got a little bamboozled by the announcement of Forge, who was quickly killed off by Respawn before the new season could begin.

“Revenant was once the greatest hitman the Syndicate ever had, a new message from Respawn explains.

“But when his programming failed, he saw what Hammond Robotics had turned him into.

“Hammond Robotics’ return to the Outlands has renewed his thirst for vengeance, and he won’t stop until they’re all dead.

“Consumed by hate and obsessed with revenge, Revenant uses unnatural abilities to haunt his enemies and defy death.”

Revenant has been tricked into thinking he was someone else, and is now ready to cause some real havoc on World’s Edge.

And now we know the story of the new character, it’s probably about time we saw some juicy gameplay footage.

Respawn has confirmed that they will be airing a new video today, before the launch of Apex Legends Season 4.

A special YouTube link has been set up so that fans can watch as soon as it goes live today, February 3.

Respawn has confirmed that the new gameplay trailer will be released at 6pm, GMT, for all to watch. For gamers in the United States, that will mean a 10am PT start time.

And when it comes to an Apex Legends Season 4 start time, the new update from Respawn is expected to launch on February 4, by 7pm, GMT.

A clue for what might be happening during Season 4 was also provided last week after we learnt its official name will be Assimilation.

Revenant certainly seems like he’s been assimilated by Hammond Robotics and is ready to settle a few more scores.

Respawn has also revealed its plans for Ranked Play with the launch of Season 4 in February.

“After the 3 months long Ranked Series 1, and the 4 month long Ranked Series 2, we have been looking at engagement on the ranked ladder and have decided to continue with a 3 month series, but divide it into 2 splits,” Respawn revealed this week.

“This means that Series 3 will have two shorter splits, each with a soft reset. Split 1 will be played on World’s Edge while Split 2 will be back on King’s Canyon to keep things fresh.

“The soft reset will stay the same for Season 4. At the start of Series 3, everyone will be soft reset on their ranked position by 1.5 Tiers down.

Apex fans can also expect the launch of the Sentinel Sniper Rifle, which will feature a charge feature, and changes to the World’s Edge map.