Courting The Kings is the next main quest in Assassin’s Creed Valhalla Wrath of the Druids after The Northern Reach. It tasks you with figuring out why Barid has yet to return from Aileach after going there in an attempt to parley with King Niall and King Domhnall of Ulster.

To that end, it’s probably obvious that most of this quest revolves around Aileach, an area under the control of the two kings mentioned above. Given that neither Barid nor the scouts sent after him have returned yet, Flann Sinna will become concerned about their wellbeing, which is where Eivor comes in.

So, whether you can’t steal a King’s Pass, are struggling with freeing the Irish prisoners in Aileach, or can’t seem to take down the kings’ men, look no further than this Assassin’s Cred Valhalla Wrath of the Druids Courting the Kings guide.

Wrath Of The Druids Walkthrough: How To Complete Courting The Kings 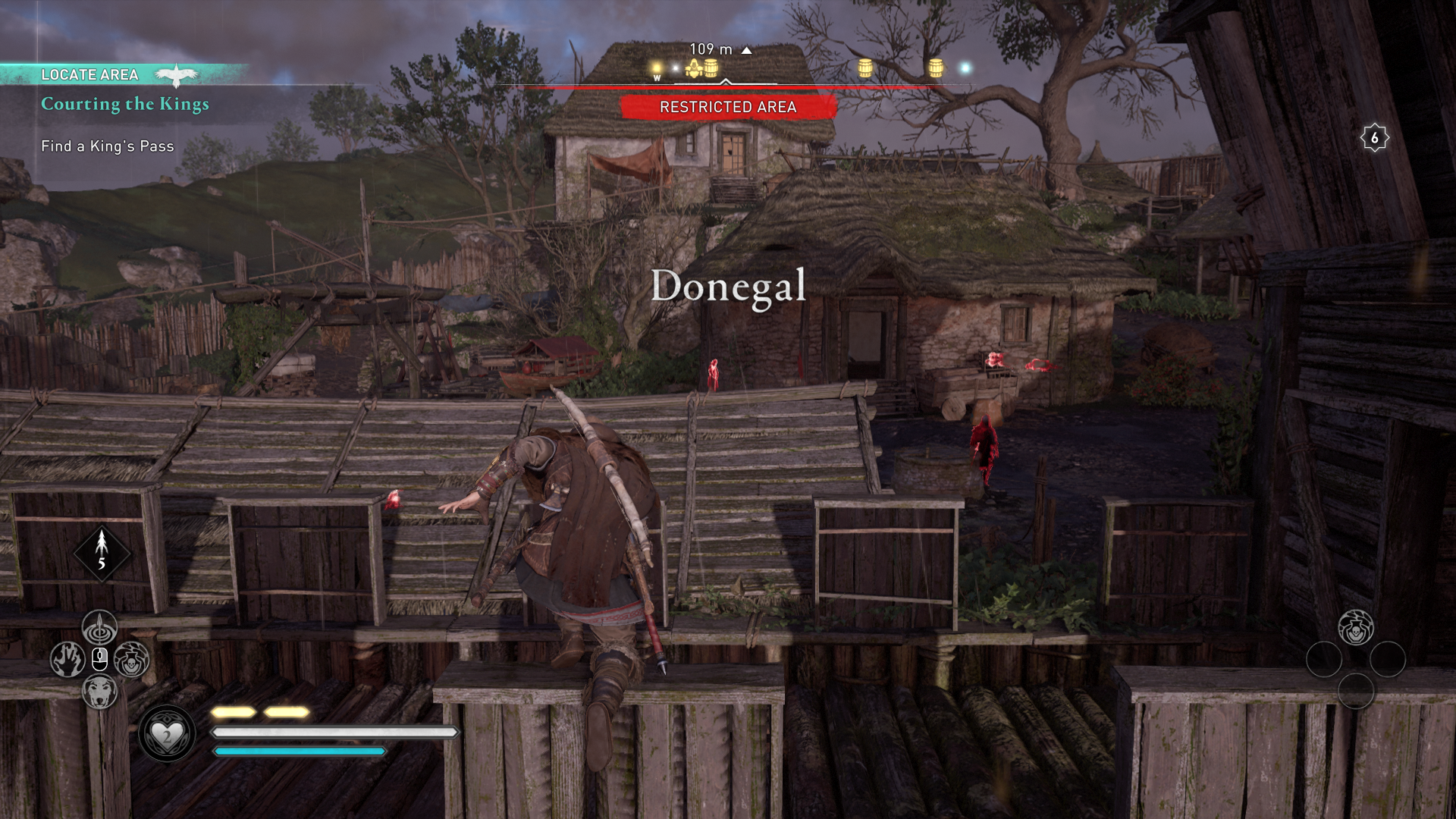 Your first task in Courting the Kings is to head back to Flann Sinna, who will be highlighted in a quest marker. He is now located in Clogher as opposed to Knockfree or Durrow, although it isn’t too far away. After meeting with him and watching the cutscene, you’ll need to head to Donegal, which will be marked on your map.

There are lots of enemies here, although you don’t need to fight any of them. Instead, go around the outskirts of Donegal until you find the gap shown in the screenshot below. 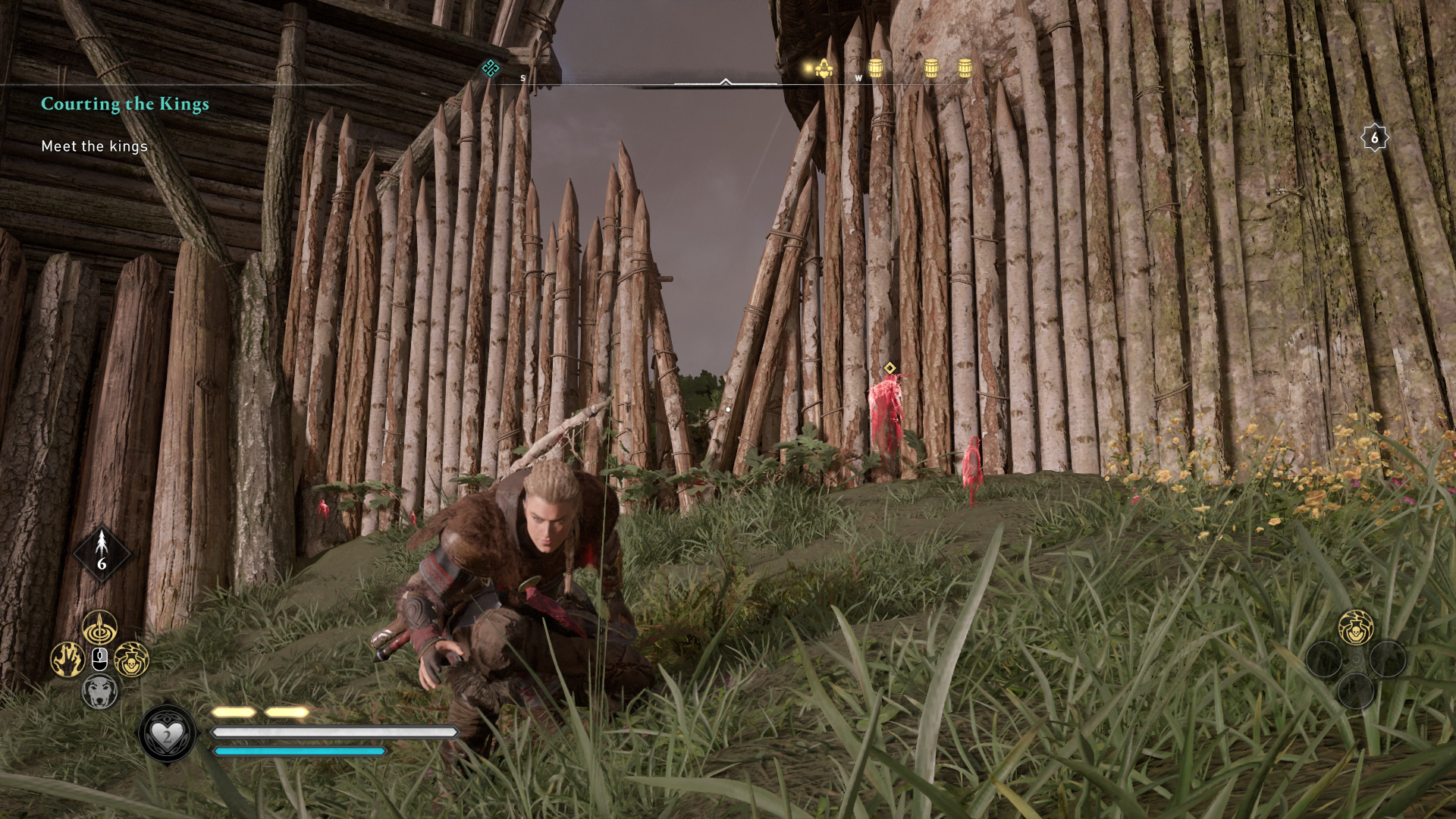 From here, you can hop into Donegal and land straight in the bushes, which will ensure you don’t get detected. In fact, the person you’re looking for – a man-at-arms – will be the very first enemy you see. Instead of fighting or assassinating him, you can simply pickpocket the pass from him and head straight back through the gap. If you’re unsure which person he is, just use Odin’s sight, which will highlight him with a green circle.

Once you have the pass, you need to head to Aileach in order to meet the kings. This will be marked on your map, so getting there is fairly straightforward. When you arrive, Barid will be inside pretending to be drunk. He will mention that there are prisoners in the ringfort, which is your cue to head in and rescue them.

The best way to accomplish this is to climb the outer battlements and cling to the wall, slowly assassinating sentries one by one without climbing onto the platform itself. Once you’ve taken out all the guards at the top, climb over the wall and start taking out the remaining enemies at ground level stealthily with your bow. There are plenty of arrow restock stations here, so don’t worry about running out of ammo.

If you have the Raven Loot perk, you can shoot the person with the key with an arrow from halfway across the map and the key will immediately be added to your inventory. Otherwise you’ll need to go past where he is anyway to access the cells below, so it doesn’t matter if you don’t have it – it just makes things a lot easier.

Go to the prison cells below ground level and take out the remaining guards. Free all of the Irish prisoners and go back to the main level. Once you’ve killed the last guard inside the ringfort, your next objective will be to storm Aileach, which is fairly easy given that you now have an army of freed prisoners on your side. After you’ve killed the last enemy, a cutscene will play where Barid takes King Niall and King Domhnall hostage. The next quest is The Mask of Diplomacy.