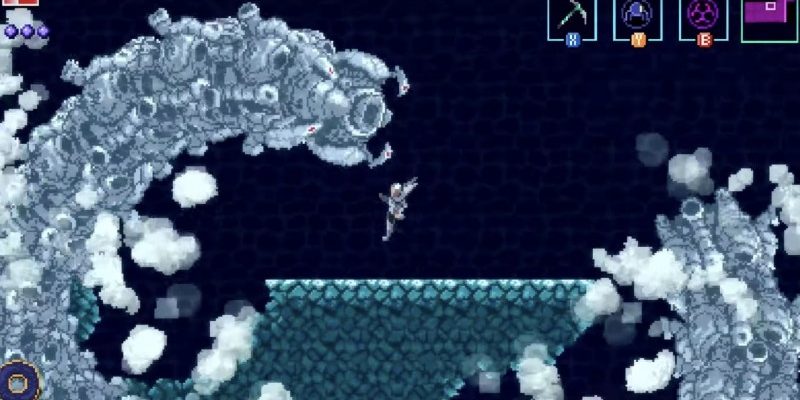 Axiom Verge was a true sleeper hit when it launched back in 2015. Solo designer Tom Happ’s love letter to classic 2D Metroid games inundated its audience in a world brimming with creepy, sci-fi creatures while maintaining that nostalgic NES/SNES aesthetic. Axiom Verge 2 was first announced during a Nintendo Indies Showcase in 2019. So, it’s fitting that the anticipated Metroid-like would premiere once again. The sequel looks even more intense than the previous entry.

The journey to Axiom Verge 2’s eventual release hasn’t been without hardship: we posted a delay announcement earlier this year. And despite this unfortunate news, the game is still slated for a worldwide launch in just a few days. Joe Juba excitedly reported that the sequel looks to build upon the foundation that the first Axiom Verge established in nuanced ways, “Axiom Verge wasn’t a mere imitator; it built on a solid foundation with its own signature elements. A heady sci-fi story and mind-bending meta elements put a contemporary twist on the familiar formula – and with Axiom Verge 2, players are about to learn even more about this series’ unique identity.”

The first game chronicled the aftermath of a failed experiment. The main character, Trace, awakens after the catastrophe and joins forces with a species of gargantuan robots. Bryan Vore reviewed Axiom Verge and awarded it a rare 9.75 concluding his review with:

“Throughout my time with Axiom Verge, I was constantly excited to explore strange worlds, gain game-changing powerups, and fire off a new gun for the first time. Almost everything you pick up feels meaningful, unlike collecting overabundant missile-capacity expansions that you don’t even need. I heartily applaud Tom Happ’s first solo effort. It’s incredible that he was able to nail every component of game creation in one package. I’ll wait as long as it takes for him to build a follow-up. When everything works this well, why let someone else get in there and screw it up?”

Hopefully, Axiom Verge 2 lives up to the hype when it drops for PlayStation 5, PlayStation 4, Switch, and PC later today.