If you’re like me, you had no idea what Balan Wonderworld was until just recently. Even though it was announced back during E3 2020, there hasn’t been much hype. Which is strange, considering it’s the first project from Sonic the Hedgehog creator Yuji Naka under Square Enix. It also features art direction from Naoto Ohshima, who headed Nights Into Dreams and Sonic Adventure. One look at the trailer shows the influence of those ’90s hits, as well as some Billy Hatcher for good measure. Overall, Balan Wonderworld promises to be a Sega fan’s dream.

The free demo (available on January 28 on PS4, PS5, Xbox One, Xbox Series, Switch, and Steam) opens with a gorgeous CG cinematic of two human teens encountering Balan. We see Balan, a freaky-looking circus man, thrust two human teens on a journey into colorful worlds based on people’s thoughts and feelings. There are strong Nights vibes at work here, but the gameplay turns out to be almost nothing like Nights.

Players don’t control Balan all too often. Instead, you pick one of the teens. Or you can have a friend join in for co-op. You start off in a hub world that takes the appearance of a green, floating field populated by adorable little chicks called Tims. These fuzzy friends bounce around and beg for food with Kirby-like voices. You can feed them gems you collect in levels to foster their growth, with them changing colors and abilities based on what color gems you provide. If you pick them up, they squirm and protest with the cutest noises. After accidentally throwing a Tim, I had a revelation.

This is basically the Chao Garden. 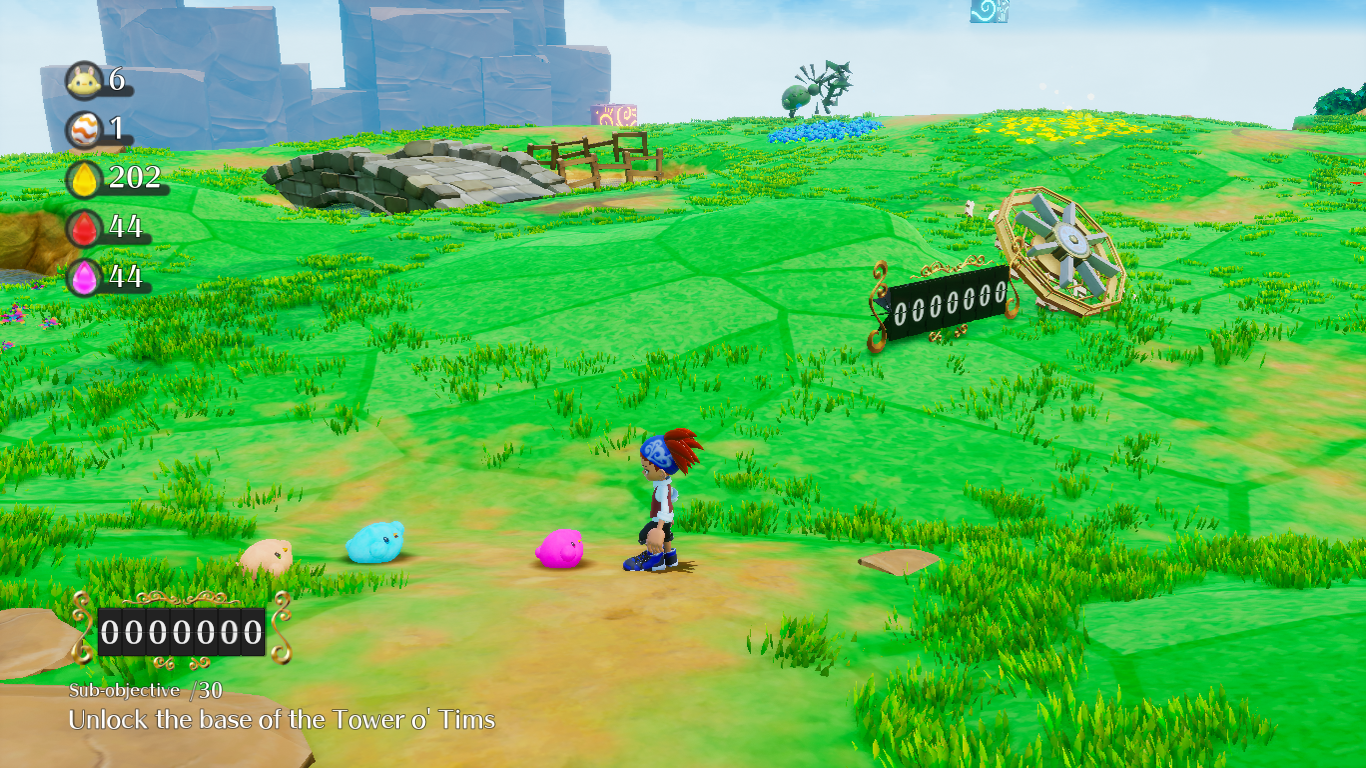 Sonic Adventure fans will fondly remember visiting the garden to raise little blue baby Chao. And they’ll probably feel that familiar wave of comfort wash over them as they appear in Balan Wonderworld’s hub, greeted by their hungry little buddies. Fortunately, you won’t be as traumatized by accidentally throwing a Tim as you would a Chao. They don’t seem to hate you or become evil after too much suffering. Please don’t take this as a call to abuse your Tims, but you might discover secrets if you throw them at certain landmarks…

Unfortunately, Balan Wonderworld doesn’t seem to have any equivalent to Chao Races or Chao Karate. Raising Tims isn’t a full-on game of its own, but rather a side activity that helps you in the actual game. So let’s talk about where you’ll spend the bulk of Balan Wonderworld: 3D platforming. 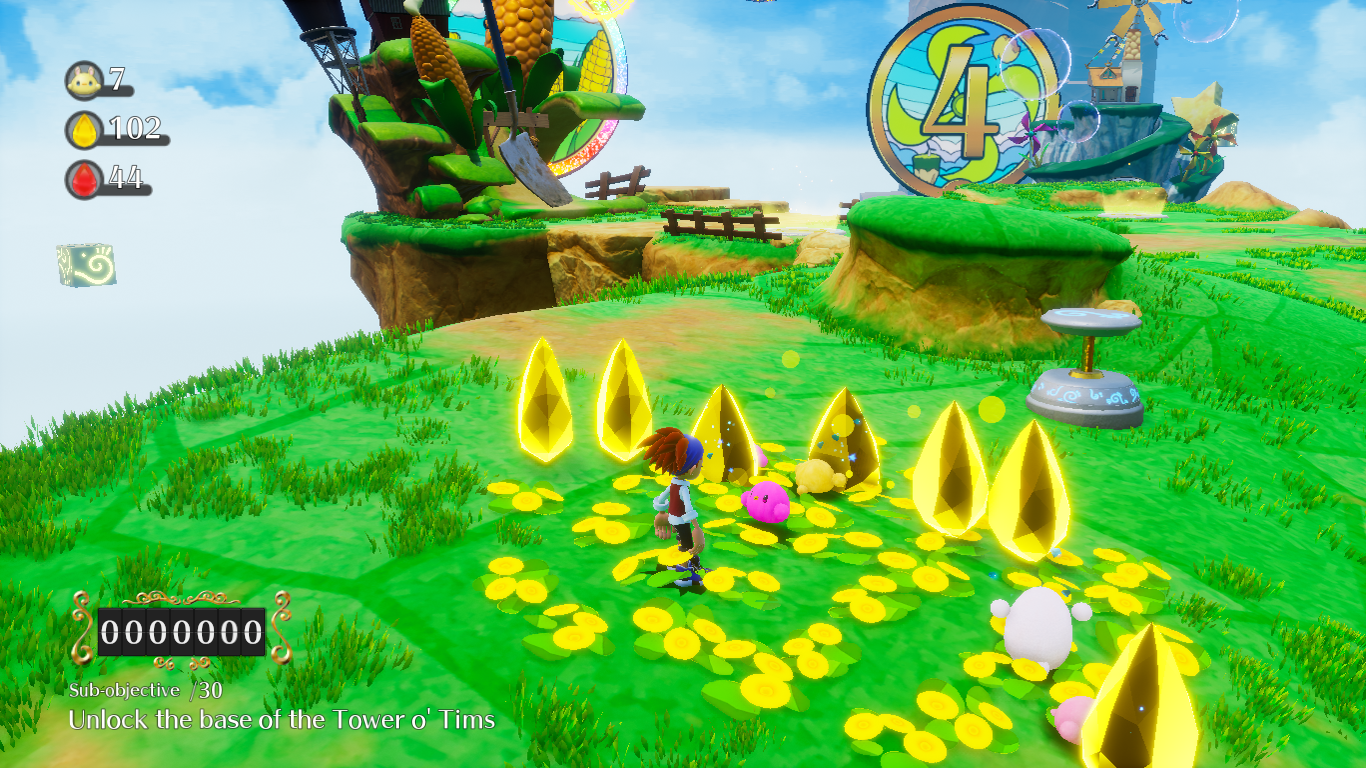 The N64-era platforming is strong with Balan Wonderworld. You guide the teens through constantly shifting dreamscapes, where peppy music plays as the dream world residents dance on the side. You quickly gain the power to transform into the dream people, minus the dance moves (your character is apparently a sick breakdancer on their own merits). Each dream creature has a special ability–tornado jumping, fire breath, or a piggy ground pound–that helps you reach new areas or defeat evil shadow creatures. Your goal is to find Balan trophies, the currency of progress.

If you’ve played Mario 64, Banjo Kazooie, Billy Hatcher, or any other platformers of that era, you get it. You take your time as you jump on and pound everything that isn’t part of the physical stage, hoping to unearth secrets. It’s not particularly challenging–even the one boss battle in the demo has a predictable pattern and leaves ample time to counterattack. Nostalgia seems to be the appeal here, along with a heap of weirdness.

It’s difficult to convey through text the extra “WTF” factor at play in Balan Wonderworld. For instance, the huge role dance apparently plays in the setting. This isn’t Shantae, where dances have mechanical effects. Side characters are constantly dancing in all parts of a given stage–and not happily bouncing, but actually have full-on choreography. Beating a boss (SPOILERS, I guess) means saving a haunted soul from negative emotions. To celebrate, you have a flashy dance number with the rescued soul while side characters pop up on layered platforms to join in, like you’re dancing on a giant cake. 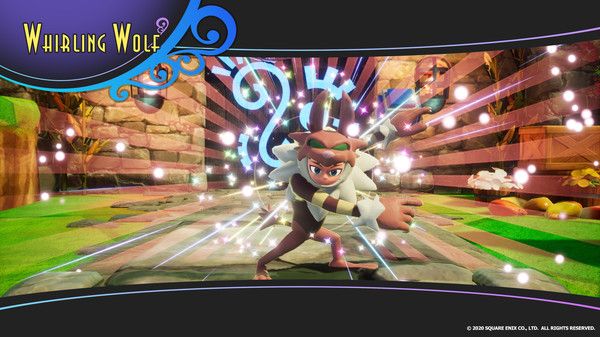 Then there’s Balan himself. If you find certain hidden points in the stages, you control Balan through a flying section. But don’t get excited, Nights fans. These stages are quick-time events where Balan flies through the same sparkly void and does the same moves on the same random floating crystals. It’s a visual treat the first time, but realizing subsequent trips are exactly the same leads to disappointment. Perhaps the full game will change it up with each world, but it was all the same in the demo. I hope so, because the character of Balan is full of promise for kinetic, bizarre gameplay.

That’s true of everything I saw in the demo, really. Knowing nothing going in, I was drawn in by the theatrics of the opening movie and the Chao Garden hub world. The gameplay hit the right kinds of nostalgia, but there’s a sense that it can (and should) get weirder. Let me go on longer flights with Balan, or let me get funky with the characters rather than just watching random dance segments. Or perhaps just make raising Tims a game of its own. I’m down to adopt a whole pack of the little guys.

Next: Which Final Fantasy 7 Character Are You Based on Your Zodiac Sign?