Dataminr, a New York-based company specializing in AI that provides real-time information to customers, today announced it has raised $475 million at a post-money valuation of $4.1 billion. The company says the capital will be used to accelerate the growth of its corporate business line, which spans physical safety and security, reputation risk and crisis management, business intelligence, and cyber threat detection. Dataminr also plans to make investments in internationalization, expanding its private and public sector sales footprint across the Europe and Asia Pacific regions.

Data analytics is the science of analyzing raw data to extract meaningful insights. Market Research Future predicts that the global data analytics market will be valued at over $132 billion by 2026. A range of organizations can use data to boost their marketing strategies, increase their bottom line, personalize their content, and better understand their customers. Businesses that use big data increase their profits by an average of 8%, according to a survey conducted by BARC research.

Dataminr, which was founded in 2009 by Yale graduates Ted Bailey, Sam Hendel, and Jeff Kinsey, offers an information discovery platform that detects patterns of emerging events and information from public data signals. While in college, Bailey studied the impact of real-time data on society and was specifically interested in how technologies change the way humans become aware of world events. In 2008, Bailey became fascinated by the new wave of platforms like YouTube and Twitter and realized these tools gave people the ability to capture events as they’re happening. Bailey also realized these platforms might be able to fill in information gaps during events if scaled. 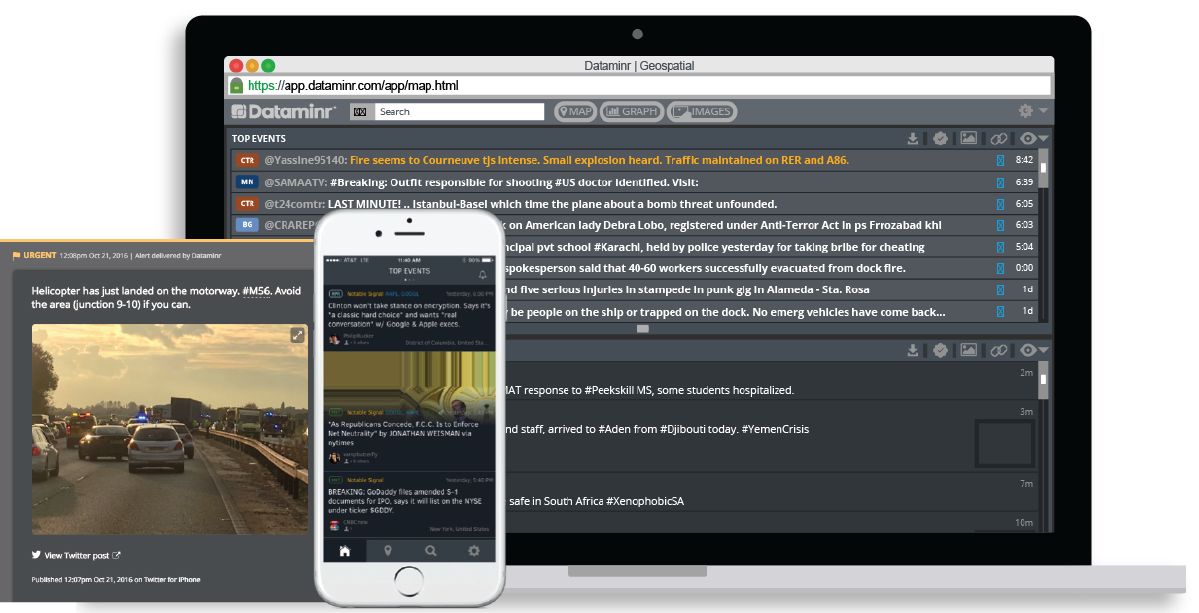 Dataminr develops products targeting businesses, the public sector, and newsrooms, all of which use a combination of AI to parse the public data it regularly analyzes. Among the techniques the company employs are natural language processing, computer vision, audio processing and classification, and anomaly detection, all of which help surface “high-impact” events and emerging risks in real time. For example, one of the world’s largest airlines uses the platform to detect events that require adjustments in flight schedules, Dataminr says.

“Dataminr has invested highly in deep learning in the last few years, which has enabled the company to pioneer new AI signal detection fields, like multimodal fusion AI, which synthesizes real-time inputs in different data formats into multi-variable event detection models,” a spokesperson told VentureBeat via email. “Dataminr can take advantage of its now over 11-year proprietary data archive, which holds the patterns of how all events were recorded in digital data and serves as the essential foundation upon which Dataminr can continue to train and update its AI models. On average, Dataminr signals on breaking events are delivered to our clients nearly four hours ahead of a wire service like the Associated Press.”

Dataminr first came into the public eye in 2011, when it issued an alert that Osama bin Laden had been killed 23 minutes faster than major news organizations. In 2019, Dataminr claimed to have detected the first signs of the COVID-19 outbreak in Wuhan on local Chinese social media platforms like Weibo and went to identify clusters indicating future spikes in 14 different U.S. states.

But Dataminr has often flirted with controversy. In 2020, the Intercept released a report showing that police departments used the company’s services for surveillance during the George Floyd protests, including accessing social media posts about protest locations and actions. The piece noted that the monitoring seemed at odds with claims from Dataminr that the company would neither engage in nor facilitate surveillance. This followed a string of bad press in 2016, when Twitter cut off geospatial data access for police intelligence centers.

Dataminr’s public image problems haven’t impacted business, though, with the roughly 650-person company reporting a doubling in revenue three years in a row from its corporate enterprise business line. The company’s clients include CNN, USA Today, the United Nations, Airbus, Shell, and the New York City Office of Emergency Management, among others.

“Large corporate clients are always discovering new use cases for our signals as they adopt Dataminr’s platform more broadly across their organization,” Bailey told VentureBeat via email. “As you can imagine, knowing about what is happening in the world faster than ever before possible, and at a scope unparalleled in human history, has a wide range of multi-dimensional use cases for corporate enterprises.”