Although Biomutant lets you change its narrative through player-driven choices, much of the game follows a set pattern. This walkthrough picks up after you’ve defeated the Jumbo Puff and will guide you through the battle with your next World Eater – the Porky Puff.

Some minor details might change based on your earlier decisions, but this Biomutant guide will give you a basic overview of everything you need to know in order to slay the terrifying second World Eater.

Starting At The Tree Of Life 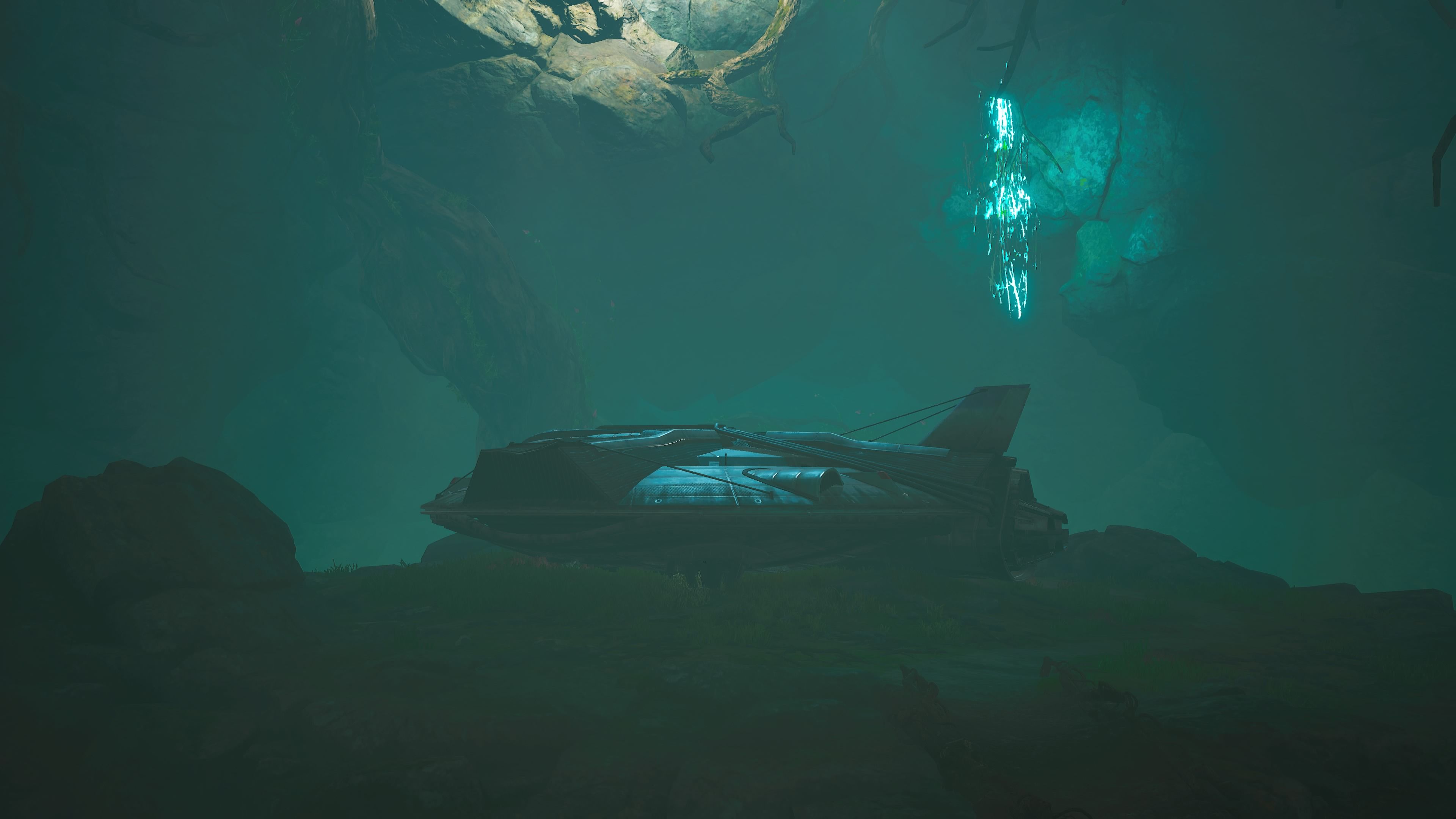 Once you’ve defeated the Jumbo Puff, you’ll be sent to visit Out-of-Date at the Tree of Life. He’ll discuss the Ark he’s been working on and give you the option to bring four companions with you in case of emergency – so be thinking about your favorite NPCs as you work through the main storyline.

After talking with Out-of-Date, make your way towards Goop, who will help prepare you to face off against the Porky Puff. As you get closer to his location, you’ll need to break through a wall using your newly acquired Klonkfist. Don’t worry – it’s hard to get stuck here, as Biomutant will actually give you a quest that tells you exactly which wall you’ll need to destroy.

Talking With Goop And Preparing The Googlide 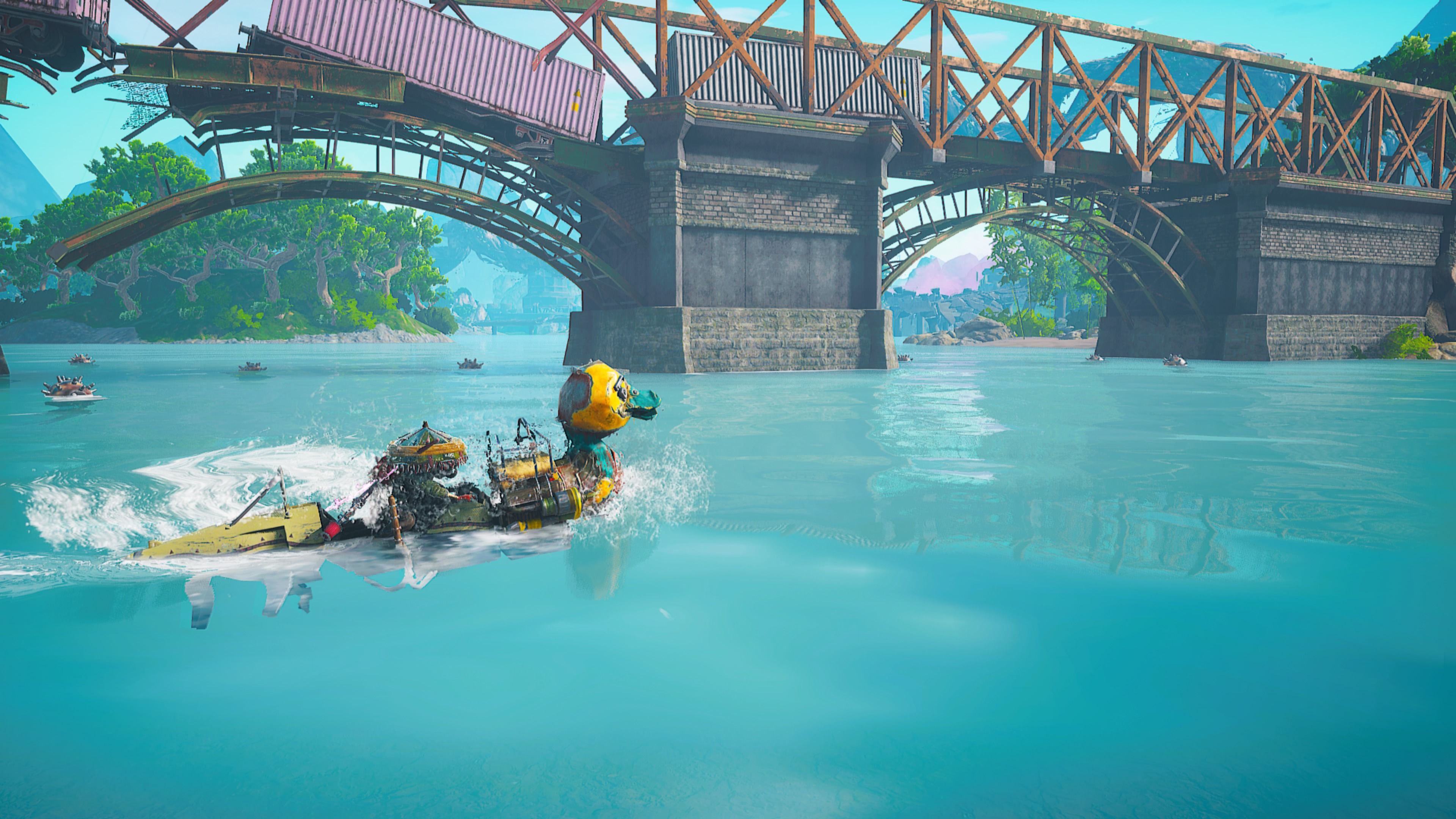 Once you’ve made your way to Goop, they’ll ask you to help finish up preparations on the Googlide. This contraption works like a speedboat, letting you navigate dangerous waterways without worrying about your Ki Energy running out.

Goop will eventually send you to meet local ornithologist Gulp, who will outfit the Googlide with Gumquacks. These can be used to distract the Porky Puff during combat, although they have a fairly lengthy respawn time if you manage to deplete your stock.

Time For A Side Quest 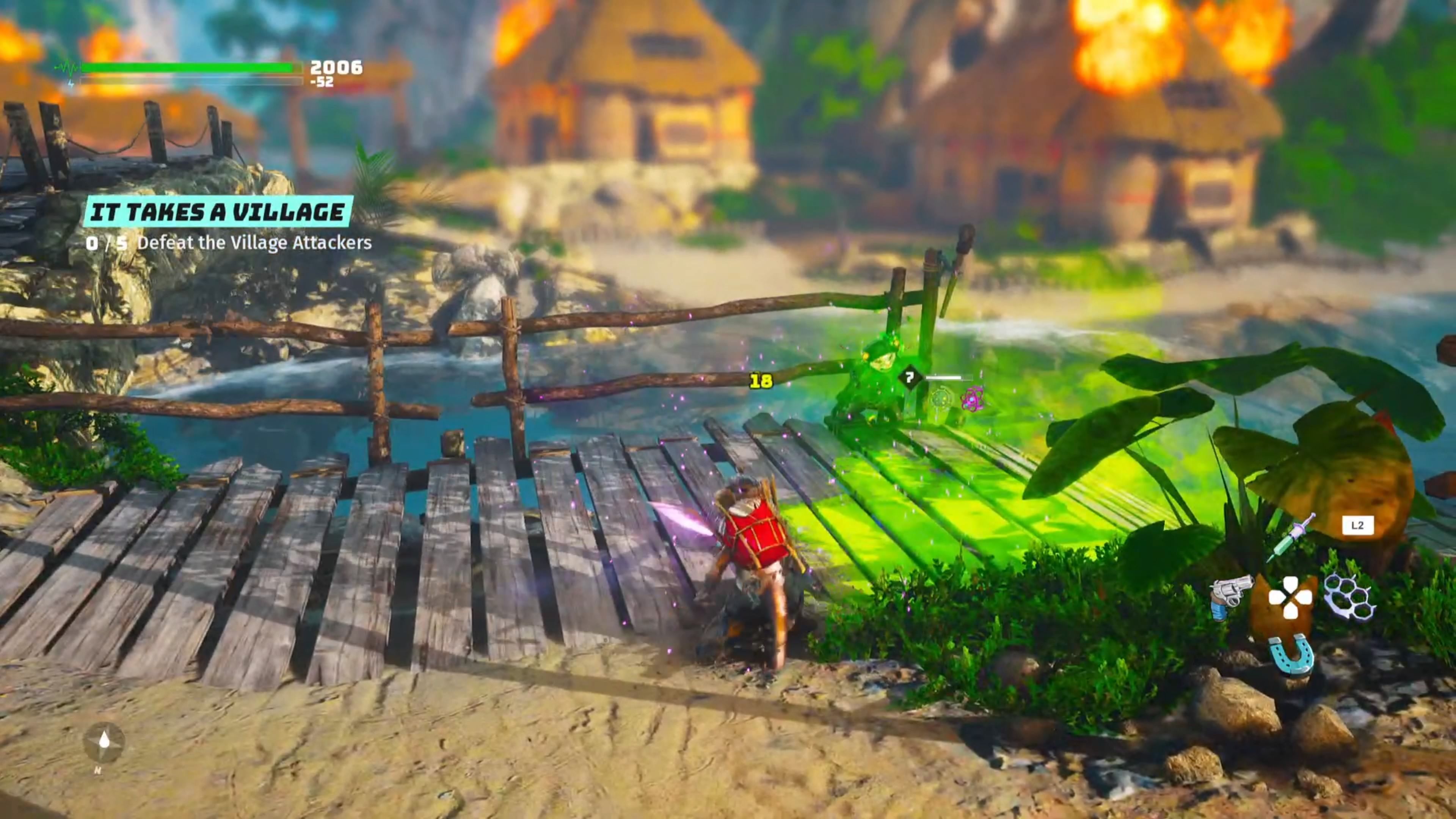 While running all these errands, you’ll probably stumble upon the town of Pokburr. Defeat the enemies laying siege to the village, then take a few minutes to explore everything it has to offer. If you haven’t been straying far from the beaten path, this might be the first time you’re encountering Gear and Weapon Upgrade Booths – both of which are critical to keeping your gear up to par with your enemies.

Once you’ve upgraded your weapons and talked to the local vendors, it’s time to get back to the Porky Puff.

How To Defeat The Porky Puff 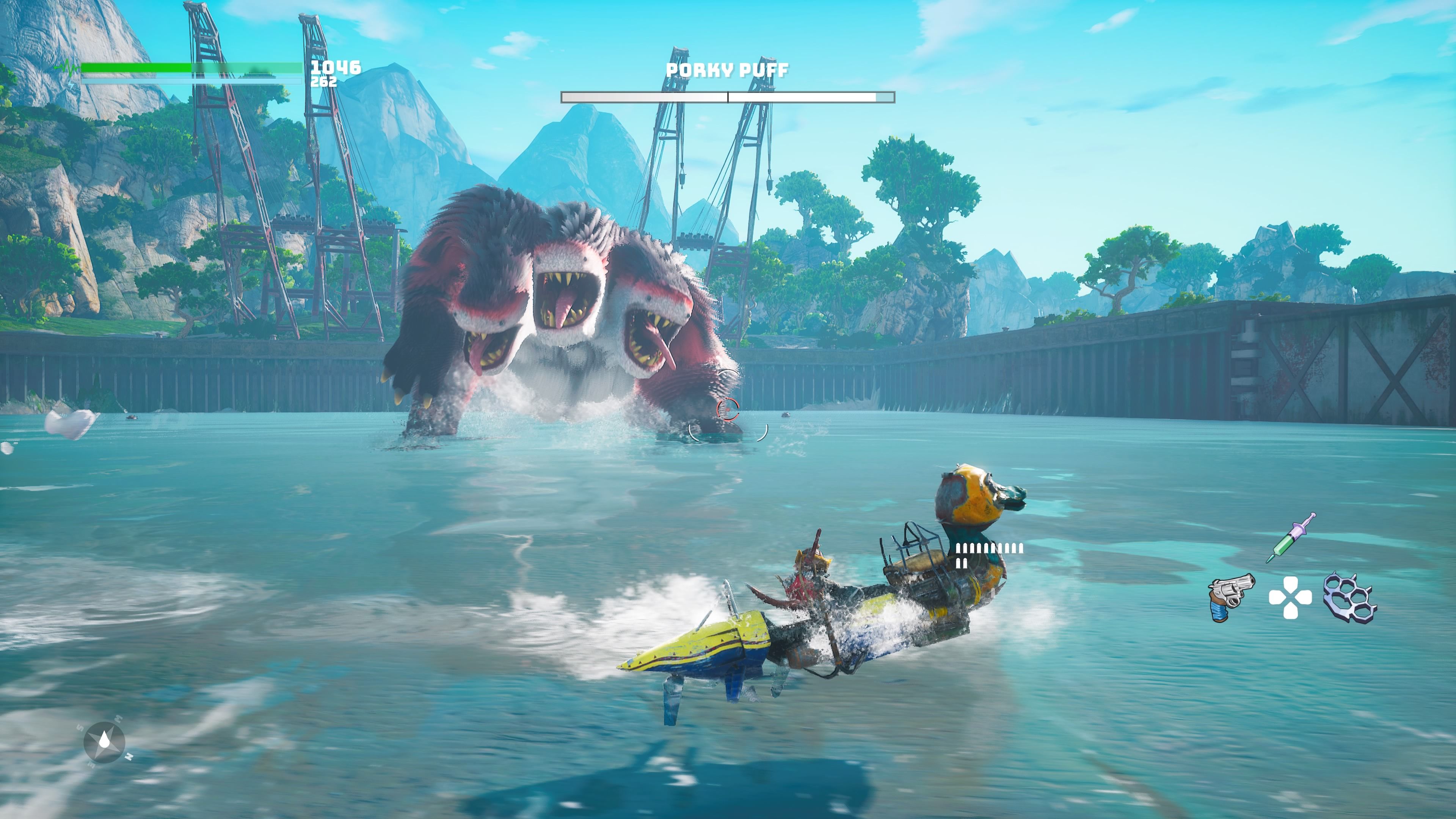 Despite taking place on a watery battlefield, the Porky Puff fight unwinds much like the Jumbo Puff fight. The action will be broken up into a variety of phases, although these largely just introduce a few new attacks to avoid without impacting your overall strategy.

In most cases, you’ll want to stay as far away from the Porky Puff as you can. The nasty beast has a tendency to send out shockwave attacks that are nearly impossible to avoid at close range. While at range, aim for the small, unsightly growths located on the Porky Puff’s legs. Destroying these results in significant damage and can open the monster up for further attacks.

You’ll also want to keep an eye on the bombs floating throughout the battlefield. If you can attach one to your Googlide and get close enough to the Porky Puff, you’ll be able to detonate it and deal a good chunk of damage. 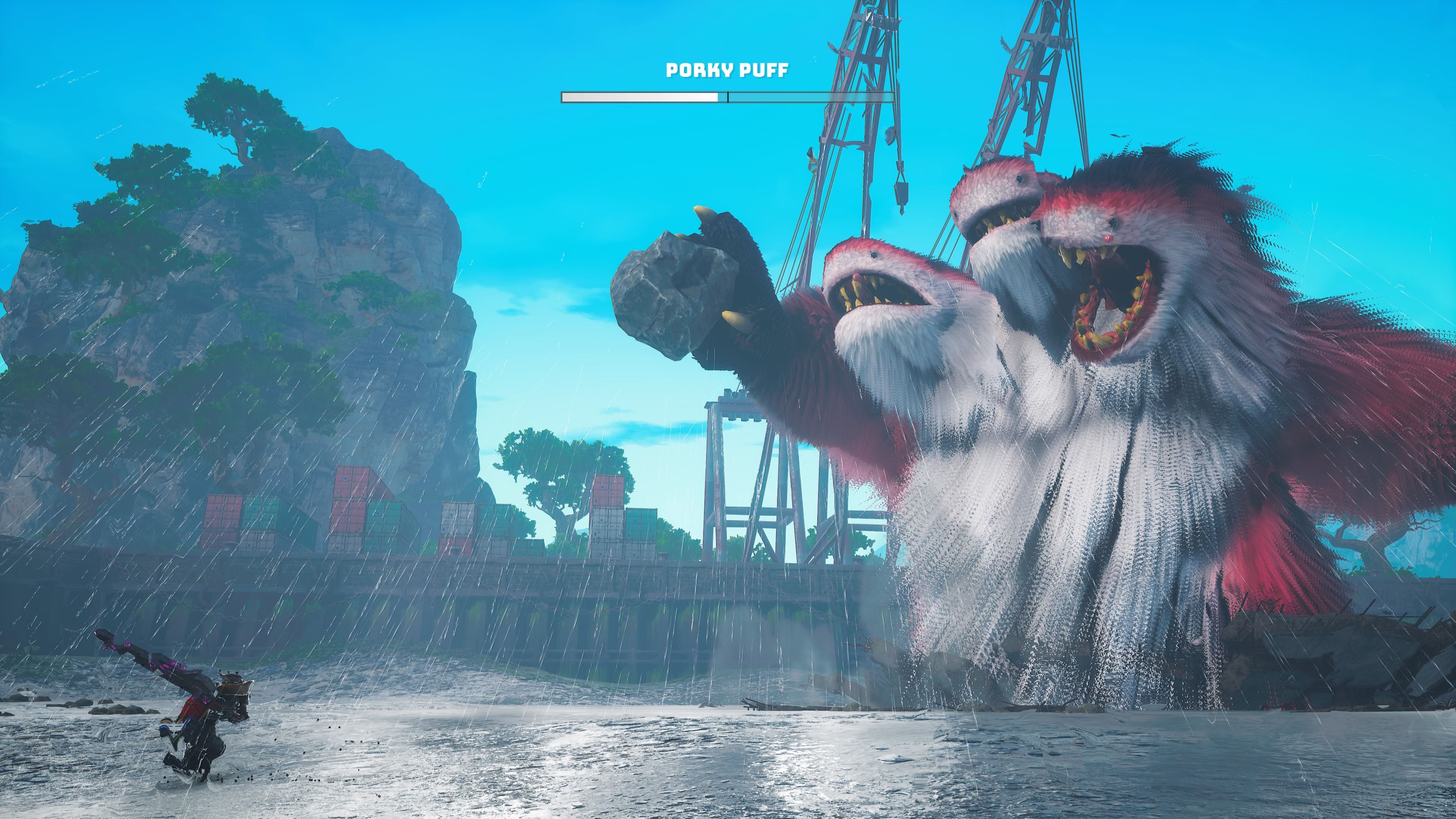 About halfway through your battle, the Porky Puff will lead you away from the water and turn the fight into a regular shootout. You’ll now have access to all your weapons and Psi-Powers, although this portion of the boss battle is arguably more difficult than anything else you’ve encountered so far.

The Porky Puff has a variety of deadly attacks on land, but most of them can be entirely avoided by always staying behind them. Make it a priority to stay behind the Porky Puff and about 15 feet away from its base. Doing this will limit its available attack options – although you’ll still need to be on the lookout for flying rocks and sweeping arms.

If you’re a melee-based class, the Porky Puff fight will probably be incredibly difficult. Getting up close to the beast isn’t an easy task. Meanwhile, ranged players will find the battle to be a cakewalk. If you’re having trouble with this phase of the fight, it’s best to head back out into the world and find some better guns or upgrade your Psi-Powers. Both of these are critical to taking down the Porky Puff and will make the second phase of battle much less challenging.

Back To The Tree Of Life

With the Porky Puff defeated, you’ll have the option to ask Goop to join you on the Ark. Whatever your choice, head back to Out-of-Date and learn about his next task. Believe it or not, there’s actually something else for you to do before facing off against the third World Eater…