There are 23 different classes to choose from in Black Desert Online, and it can be a bit overwhelming. Each class has its own benefits, and deciding the right class can take a while. This guide is going to go over everything you need to know about the Shai class.

The Shai is a small, female character that excels in leveling up life skills. They are also incredibly versatile and capable of dealing a high amount of damage. We are going to look at all possible Shai skills, as well as how to maximize your time playing as this class. 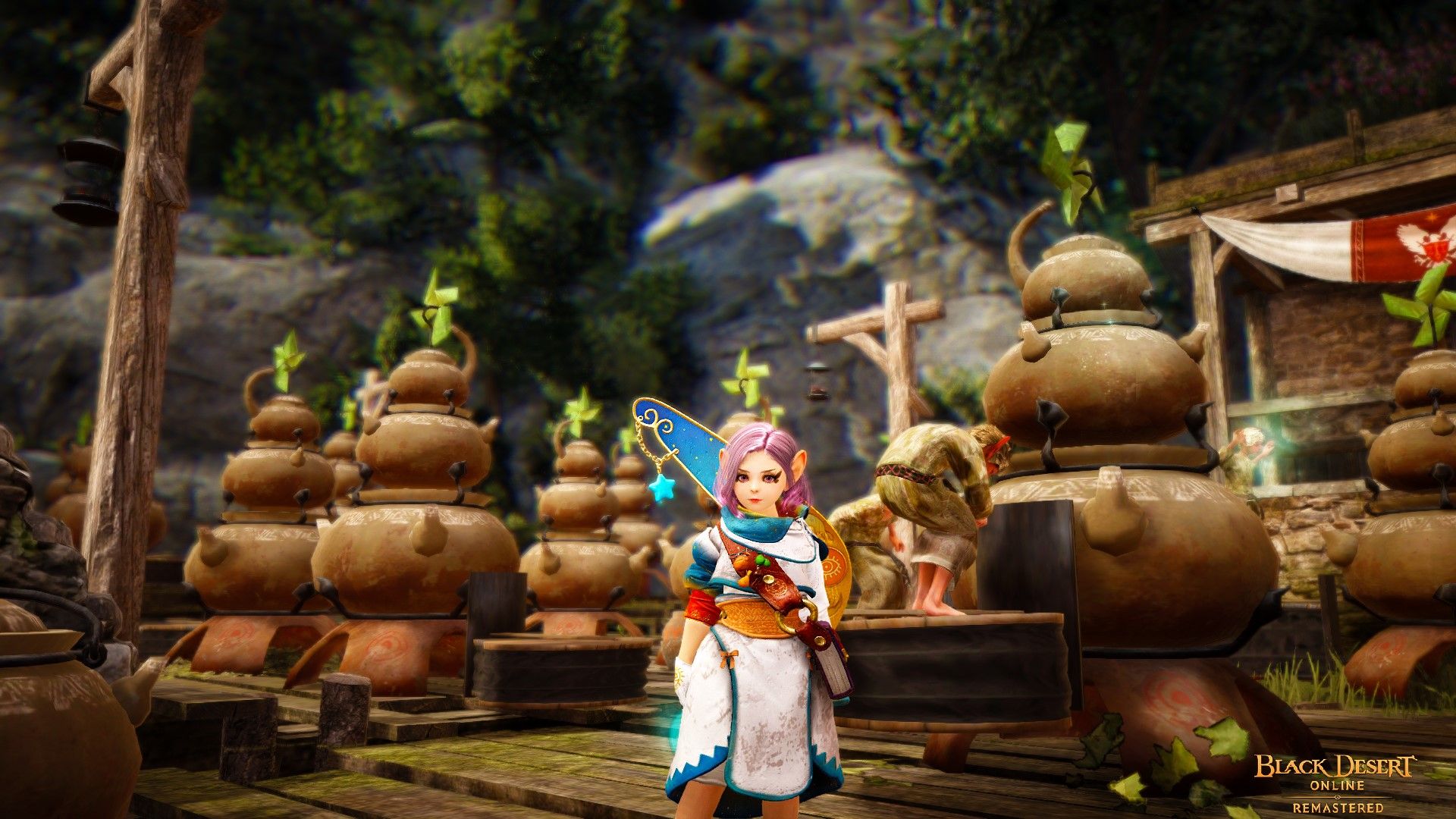 The Shai is probably the cutest class in Black Desert Online. Originally hailing from the town of Florin, the Shai is an expert in gathering and alchemy. Her passive abilities focus on life skills, allowing her to become a master gatherer and alchemist.

As a Shai, your main weapon is a florang and your sub-weapon is a vitclari. The florang is a boomerang-like weapon that you can throw at enemies. A vitclari is essentially a little orb that can help boost AP or DP. Additionally, a few healing skills come from your vitclari.

Unlike other classes, the Shai does not have an Awakening. Once you hit level 56, you will be able to learn different songs on a Sol. This is an instrument that will give different buffs depending on the tune that is played. Rather than traveling to defeat enemies and gain a new weapon, you will just travel to different cities, gathering new pieces.

The quest is straightforward and pretty easy to complete. After gathering songs and your new Sol, you will be able to spread your music throughout the battlefield!

Is Shai A Supporting Class? 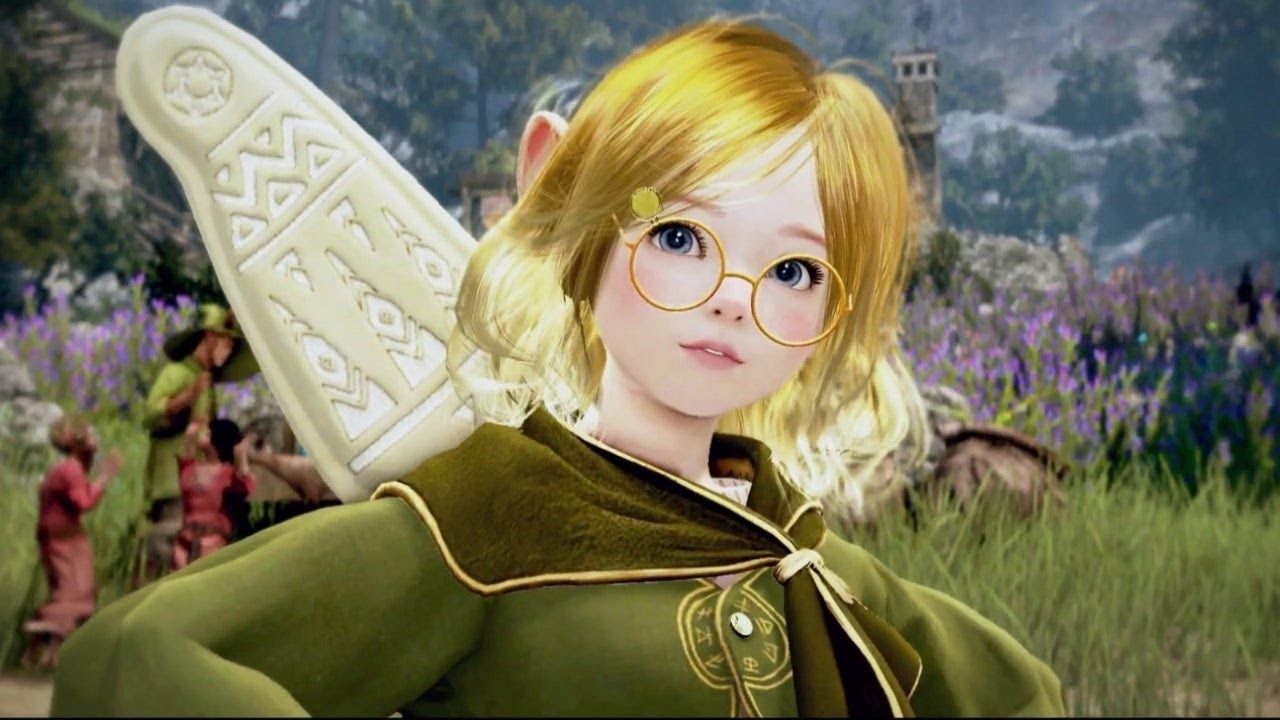 Overall, the Shai is a supporting class. She has several abilities that buff and heal allies, which is essential to playing with friends.

On her own though, the Shai is a formidable foe. Because she doesn’t have an Awakening, she is able to deal a lot of damage while at lower levels. Don’t be worried about the amount of damage you will deal while playing as a Shai, she can stand on her own. Through proper gear and weapon enhancement, you should be strong enough to progress solo throughout the world. 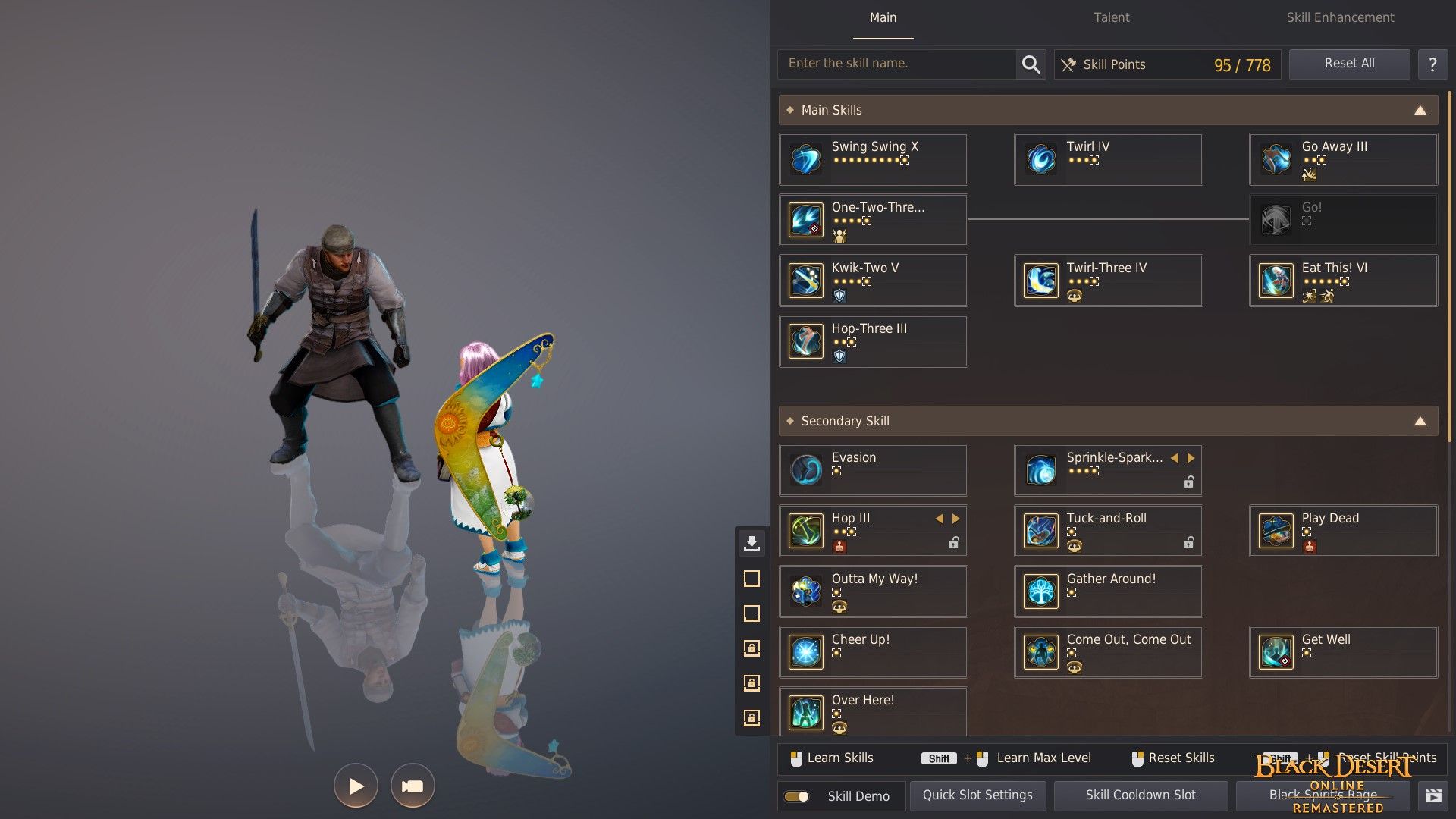 Shai skills are simple and easy to get the hang of; almost every attack deals with the florang. Through leveling up, you will be able to activate and upgrade new skills with skill points. You will be able to reset skill points, so if you upgrade the wrong skill, you can change it later. Below, you can check out all the main and secondary skills for Shai that appear in the ability menu in the game. To access this page, press K.

Swing Swing: Swing your florang at an enemy. (level 1)

Twirl: Throw your florang while running sideways. This can be used to avoid enemy attacks. (level 1)

Go Away: Kick enemies in front of you, launching them in the air. (level 1)

One-Two-Three: Use this basic attack to throw your florang up to three times. (level 1)

Kwik-Two: Throw your florang while dodging and moving backward. (level 9)

Twirl-Three: Spin and throw your florang in addition to providing immunity for debuffs. (level 11)

Eat This!: Throw your florang forward with two hands. This is reckless but has the longest range out of any skill.  (level 13)

Evasion: Evade in any direction. (level 1)

Tuck-and-Roll: Roll away from danger, with attack speed increasing for a few seconds after the roll. (level 1)

Play Dead: Trick enemies into thinking you are dead. This does not work on monsters. (level 50)

Outta My Way!: Push back all nearby enemies, while gaining AP. (level 1)

Gather Around!: Gather all nearby enemies around you. (level 40)

Cheer Up!: Heal all allies and yourself. (level 7)

Come Out, Come Out: Reveal any camouflaged enemy nearby. (level 40)

Get Well: Heal all allies and yourself with a ‘breeze’. This breeze will push away nearby enemies. (level 36)

Over Here!: Create a protective area for yourself and your allies.  (level 55)

Above, you can see all Shai main and secondary abilities. These abilities are strong for PvE, however, she doesn’t have the best AoE attacks. A Florang can sweep around and hit a few enemies, but it isn’t great for wiping out large crowds.

Try to stick to smaller groups of enemies when you are playing as a Shai. It is very easy to get overwhelmed by the number of enemies that surround you. 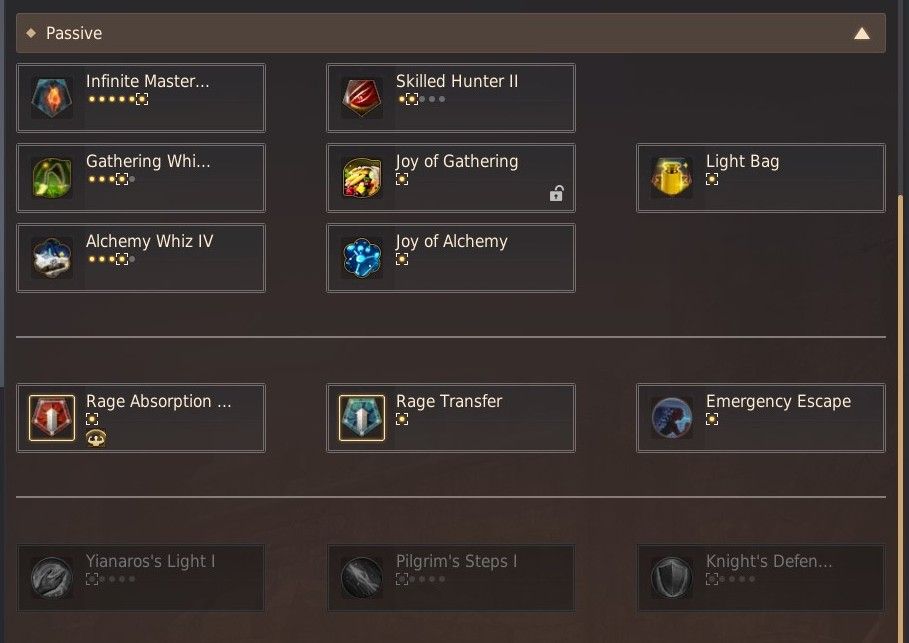 Next, we are going to look at the passive abilities of the Shai. As you will see, these abilities aren’t geared toward combat. A lot of the passives involve alchemy and gathering. These passives are great for life skills, however, they will not greatly affect your combat.

Infinite Mastery: Passive for every class to boost HP. (level 50)

Rage Transfer: Transfer Black Spirit energy to someone else. (level 35)

Emergency Escape: Quickly escape when you are low on HP. (level 1)

Node/Conquest war participation is completely optional in Black Desert Online. Feel free to focus on other parts of the game instead. It’s completely okay to focus your attention on life skills while playing as a Shai. 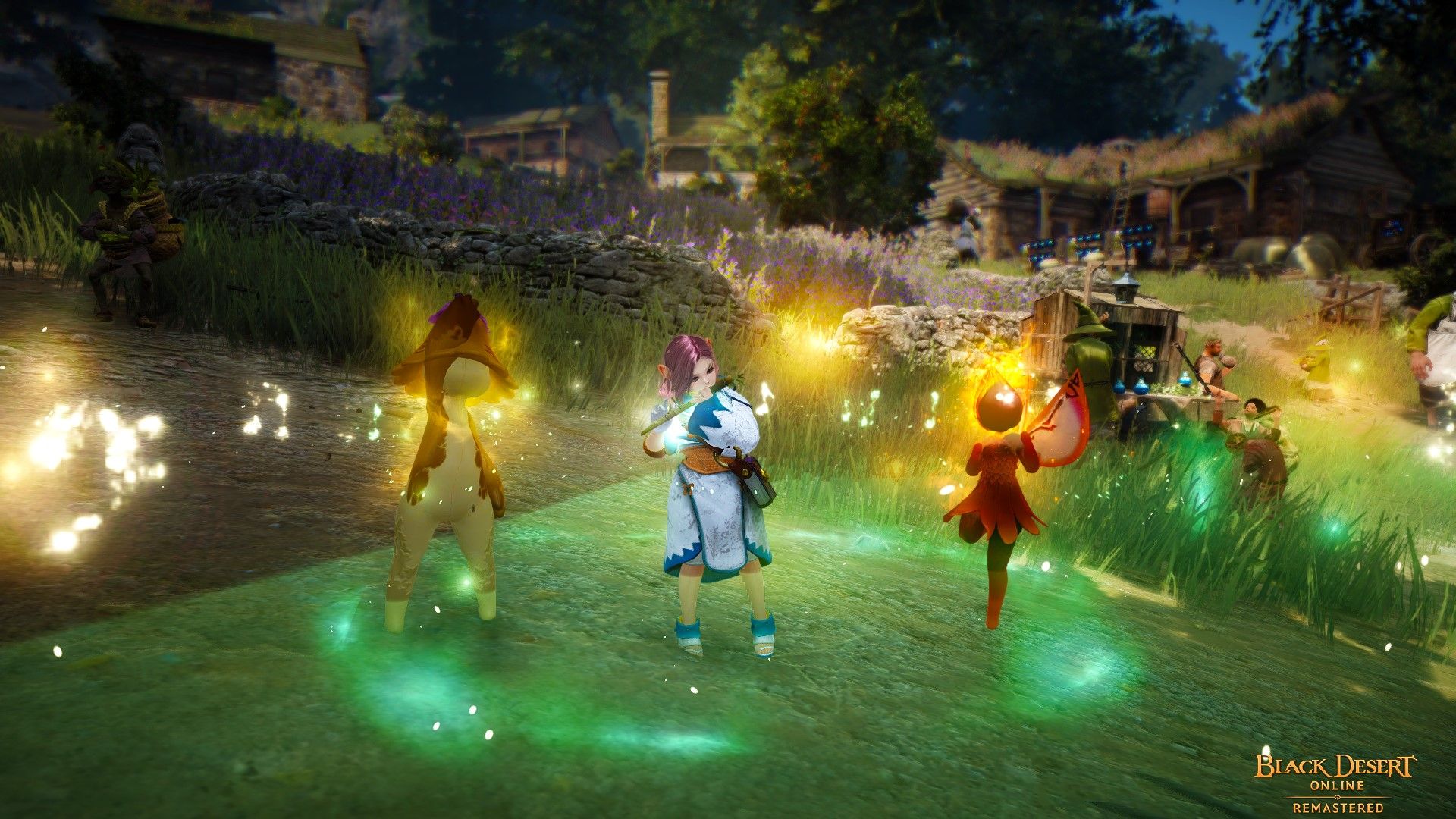 Finally, we have Shai talents. With you Sol, you can play a variety of songs that will affect those around you. It is important to remember when you play these songs, that you will be basically standing still. Some songs may seem great for lowering the defense of enemies, but if you are by yourself, it is quicker to just attack them with your florang. These songs are great if you play with others, though.

Since you are playing music in the area, these effects will be felt by any nearby ally and enemy. Additionally, each song will affect up to ten people.

Time To Shine!: Increase the rate at which Black Spirit Rage is gathered. (level 56) 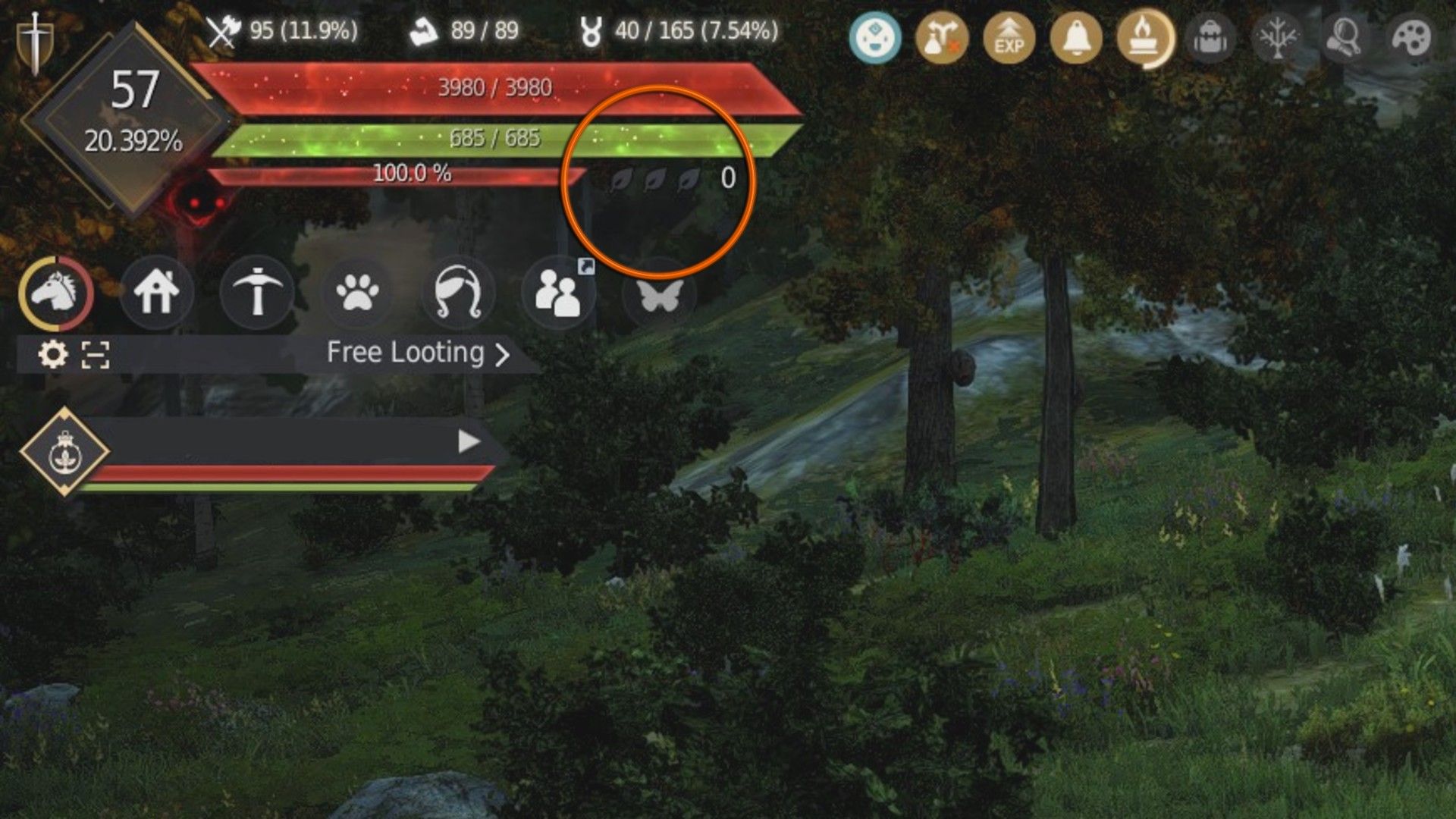 In the top right corner of your screen, you will see HP and MP. HP is your health, and MP is essentially your magic stamina. Certain skills will drain your MP, while others restore it. Using a range of skills will ensure that you never run out of MP.

Under MP, you will see three little leaves. These are your florin leaves. Each time you land a skill, these leaves will increase until you have all three filled in green.

Once you gather three leaves, you will be able to use the Outta My Way! skill. This move will activate when you press the spacebar. As mentioned above, enemies will be pushed back and your AP will increase. This skill comes in handy if you are surrounded by enemies. Push them out of your way and attack with your florang. 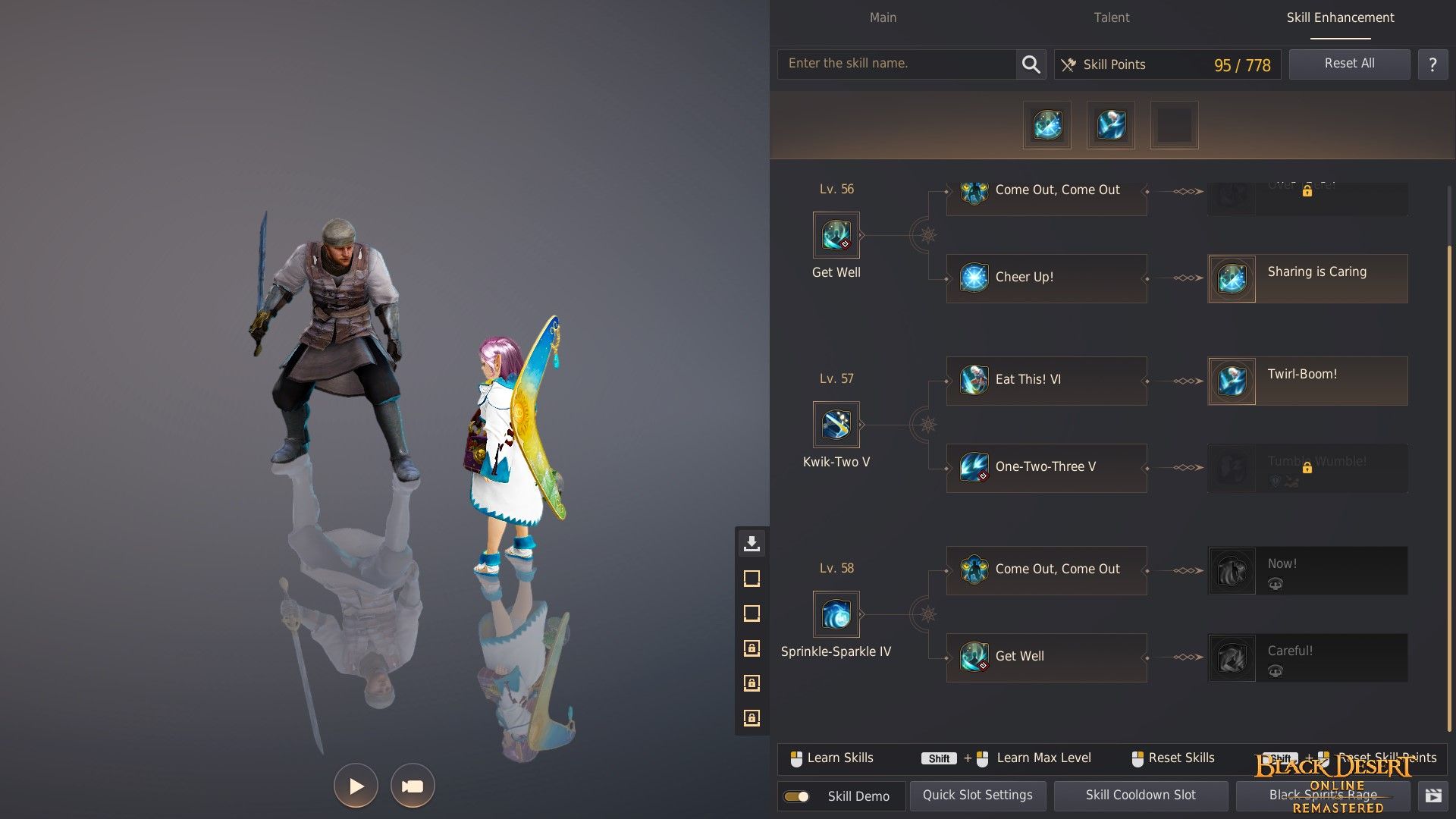 At levels 56, 57, and 58, you will have the opportunity to enhance your skills. We are going to go over the skills at each level.

At this level, you will be able to enhance Come Out, Come Out or Cheer Up.

At this level, you will be able to enhance Eat This! or One-Two-Three.

Both of these skills deal roughly the same amount of damage, so the choice is up to you.

At this level, you will be able to enhance Come Out, Come Out for the second time, or Get Well.

Camouflage-revealing skills sound good, but overall, they aren’t the most useful. Choose Careful! to add another healing skill, boosting your performance as a support class.

Tips For Playing As Shai 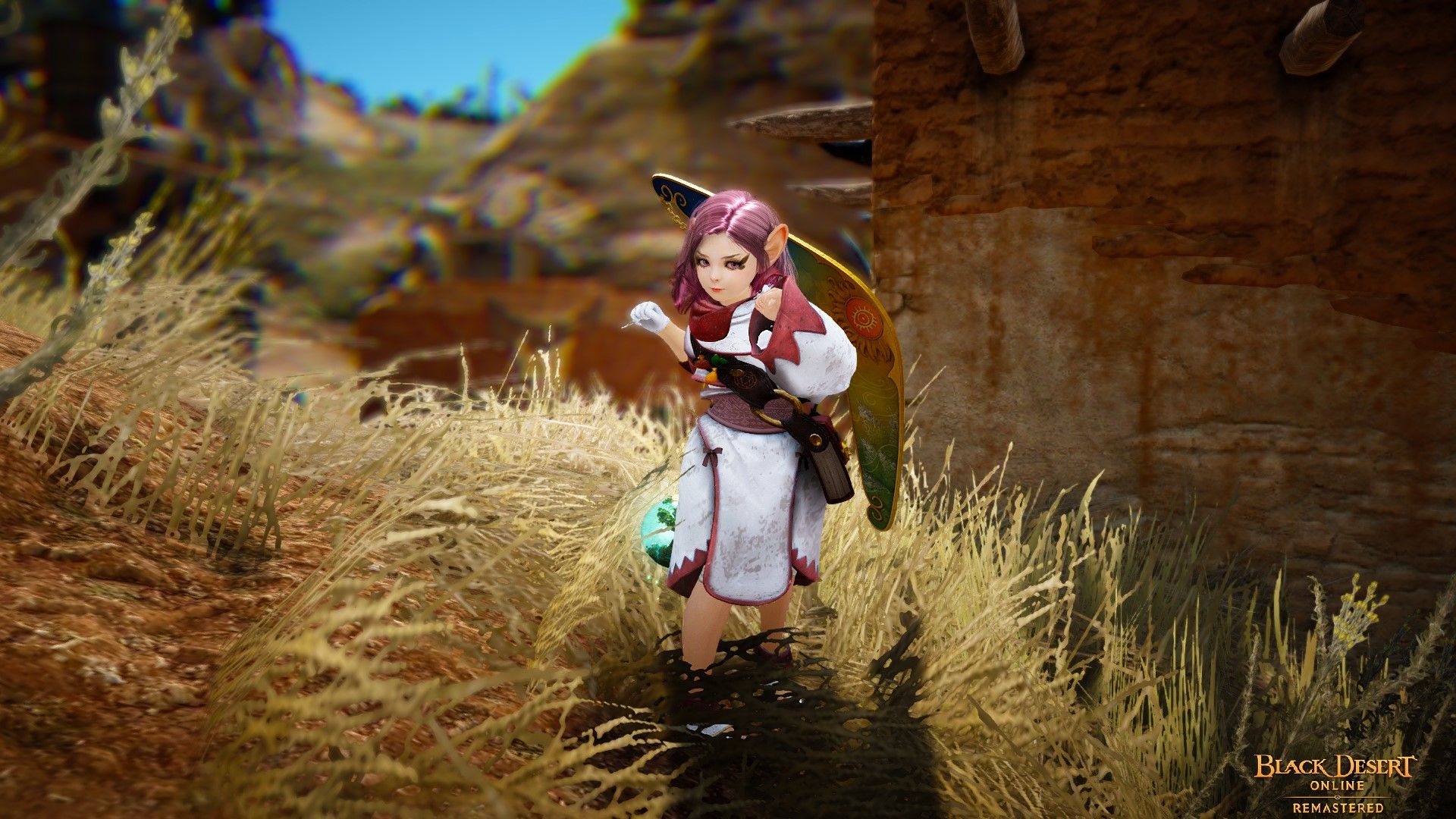 Now, let’s go over some tips for playing as a Shai. It is very important to enhance all of your equipment. This goes for pretty much every class. Summon the Black Spirit to check which pieces of equipment you can enhance.

Black Desert Online is unique in that you don’t have to follow the main story or participate in dungeons. This sandbox MMO lets you do pretty much anything you want. This may be confusing for new players.

If you want to follow a story and gain new weapons, consider making a Seasonal character. Seasonal characters progress through the main story, gaining new and powerful equipment. It’s easy to level up and build a great character. When the season ends, your character will be converted to ‘normal’, and you will be able to either keep or trade in your gear. Playing a seasonal character is a great way to introduce yourself to the world of Black Desert Online.

Let’s look at combat and skills now. Shai combat abilites are simple. Throw your florang to deal damage, while avoiding attacks from enemies. She really shines with her ability to heal others though. Level up your healing skills to get the most out of this supporting class. 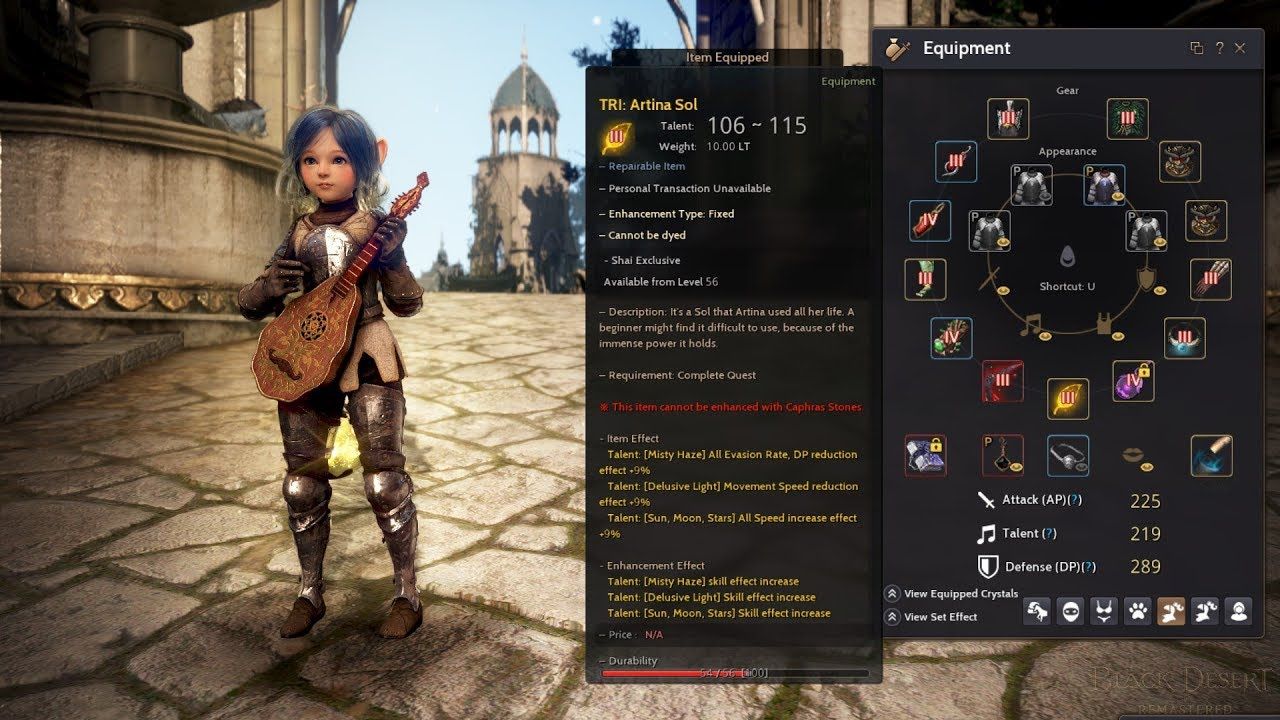 There are a lot of songs to choose from. If you are new to Black Desert Online, then it may be difficult to prioritize skills and songs. When you first unlock the Sol, try focusing on just a few songs. For example, you can focus on healing with Tuning and Shout to the Sky. If you ever feel overwhelmed with skills and songs, remember to add some to your hotbar.

Shais have the unique ability to create a bonfire. This object increases ally HP and energy and cures hypothermia. This consumable item can be crafted and placed. It’s incredibly useful while playing with others.

Overall, play as a Shai for PvE combat. She excels in evasion and dealing damage. Unfortunately, she has PvP damage reduction. Because of this, she is less than ideal for PvP combat. If you are interested in PvP, try picking another class.

Now, you should know the basics of playing Shai. Get out there and explore the world! 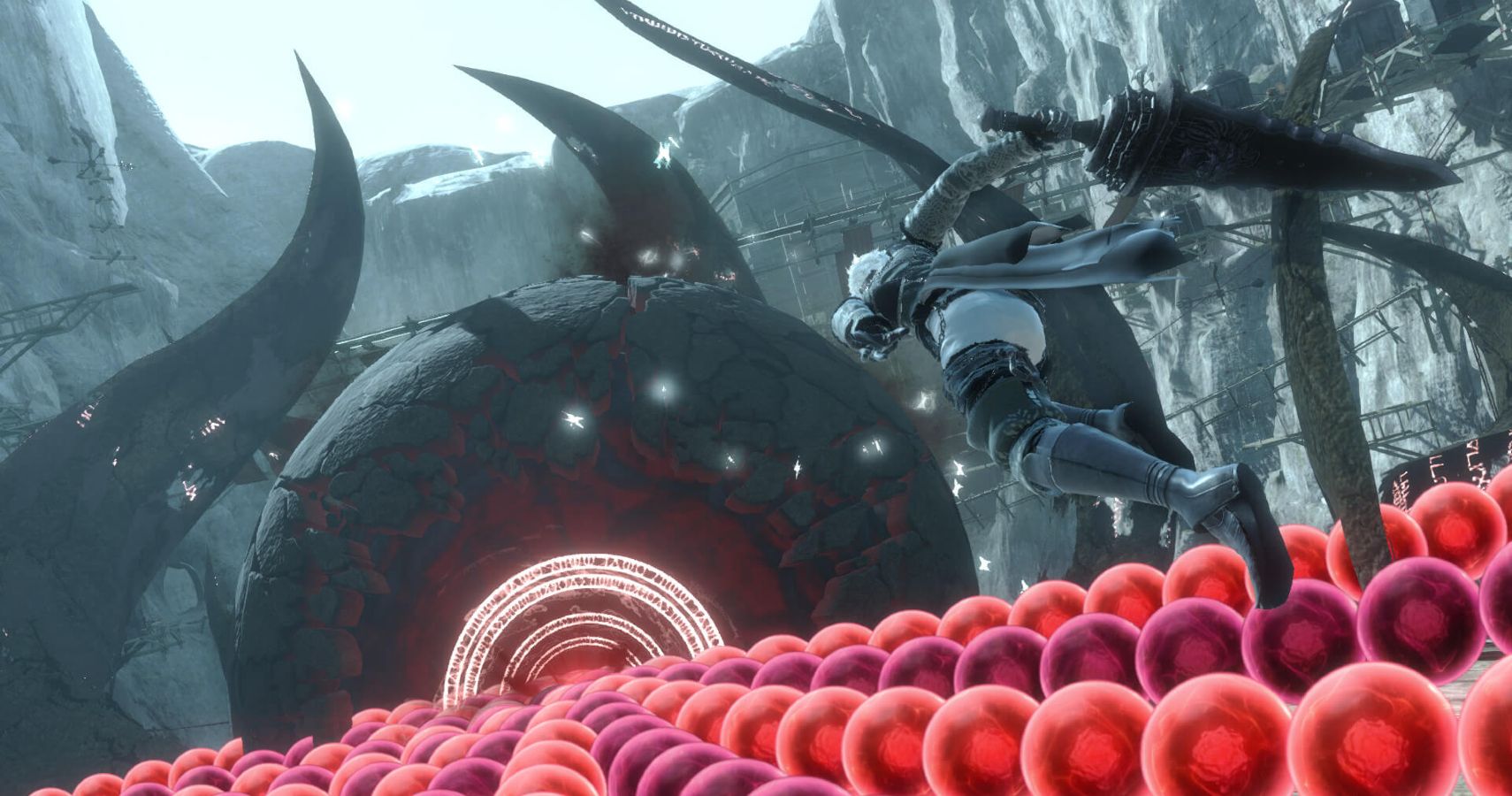 Jacqueline Zalace is a writer for TheGamer, based in Austin, Texas. When she’s not writing or playing video games, you can catch her doing yoga and painting. Follow her on Instagram @juneb.ug