One of my fondest gaming memories is playing Vampire: The Masquerade – Bloodlines in the dead of night. Like many people, I had been enticed by Bloodlines’ reputation being the only other game released alongside Half-life 2 at launch to use the Source engine. However, the tech for the game became a moot point, as I found myself sucked into the World Of Darkness’ gripping universe of vampires trying to balance a busy life of blending in with humans, backstabbing other vampires, and preventing end of the world prophecies from coming to pass.

When it was revealed at this year’s GDC that Bloodlines 2 was getting a sequel, my excitement was tempered trepidation. Seattle as a setting sounded like a good move, and the prospect of returning to the universe that so held my attention as a teen was great. However, instead of being entrusted to a studio with experience crafting immersive sims like Obsidian, Bloodlines’ sequel is being created by Hardsuit Labs, a developer for the multiplayer first-person shooter Blacklight: Retribution.

At this year’s E3, I got to see a 20 minute demo of the game in action and speak with several members of the development team making it. I came away relieved and confident in Hardsuit Labs’ ability to follow up one of my favorite RPGs to the point the long wait for the Spring 2020 release will be agonizing.

So what makes Bloodlines 2 so promising a successor? Let’s get to it, my fanged pals of the night. 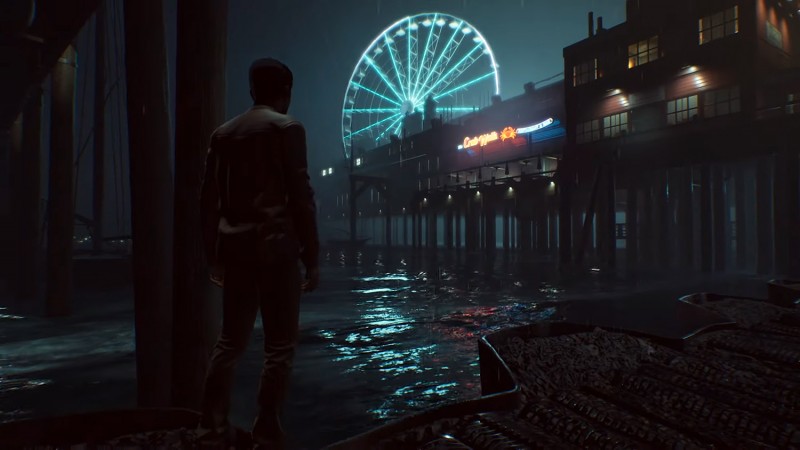 The World Is Still So Rich

Bloodlines’ defining quality is that it’s just such a great universe to inhabit. If you haven’t played the original game, the closest comparison I can make to it is John Wick‘s underground world of assassins. You have vampires living in modern times, creating laws (or breaking them) meant to keep their identities safe and humans ignorant, using their powers to shift their fortunes and make the best of being creatures of the night as the hum of the modern world continues around them. Entire wars are waged outside of mankind’s awareness, in sewers, in alleyways, and in skyscrapers. The sheer wonder of using your super powers against a deranged serial killer doctor living in Santa Monica or ridding a haunted house of its ghost to please the owner of a gothic night club is still arresting all these years later.

Seattle is different territory than Los Angeles, but the lighting and the layout of the streets felt like a much prettier version of the original Bloodlines. You’re not going to be wandering forever and ever in search of where you need to go. The districts are filled with locales of interest and quest givers, much like the original, and all those quest givers have agendas, which you can embrace as your own or reject fully.

Clan In The Front

Much of the intrigue of the original Bloodlines’ story was the feuding clans and the distinct traits that set them apart from one another. The Toreador, for example, are master manipulators, capable of great charisma and seduction through their charms. They can talk their way out of nearly anything the world throws at them. On the opposite end you have the Brujah, big nasty vampires who like to hit their problems in the face with super strength. Naturally, these two clans are not fond of one another.

In Bloodlines, the overall relationship of the player to the clans was set in stone: you were an errand boy/gal working for all the clans at one point or another. Bloodlines 2 changes it up by making things a bit more flexible and giving players choices.

For example, during our demo, a character for an unrevealed faction sent the protagonist vampire, a lowly thinblood, to secure some information through any means from a Nosferatu, deformed vampires who can’t be among humans because of how disfigured and monstrous they are.  When you visit the the Nosferatu hideout to get information on where your target is, the gatekeeper gives you the option to offer your target sanctuary at the Nosferatu hideout instead of handing information over to your client.

When you reach your target, a number of options unfold. You can beat him into submission until he gives you the information and then let him go or execute him. You can also just charm him into giving you the information, offer him the sanctuary and convince him to go there. Your choices will, of course, have consequences.

Letting the Nosferatu go without getting the information you need will infuriate your original client and might wipe out any future quest opportunities you could have with them. On the flip side, your relationship with the Nosferatu will blossom, giving you access to their quests, and you might even get something from the Nosferatu vampire you let go earlier.

According to senior narrative designer Cara Ellison, the game is designed so that there are no right or wrong choices, just interesting what Hardsuit hopes are interesting consequences for your actions.

One of my main concerns for Bloodlines 2 was that current trends might push it toward an open-world design when the original game was hub worlds, with areas separated by loading screens. This meant that such areas were much more focused on unique details and felt like real spaces, with relatively few cloned assets or environments that might be necessary with the sprawl of an open world.

According to lead UI/UX designer Rachel Leiker, Bloodlines 2’s version of Seattle is (thankfully) a hub world. Areas are divided into districts of real-world Seattle, like The Jungle, a place known for its homeless population. Bloodlines 2, as the series is wont to do, adds fantastical elements to these places. In the case of the Jungle, the encampment serves as a stomping ground for the Nosferatu.

Weird Setpieces Are Still On The Table

Ellison says that Bloodlines 2 will have a “crime-based drama” feel to the story. However, that doesn’t mean that fantastical segments, like the infamous haunted house sequence or the creepy mansion inspired by Alice In Wonderland in the original Bloodlines, won’t be making an appearance. While the story is more grounded, Paradox senior product manager Florian Schwarzer says, “We will have things on [Bloodlines’ weirdness level] in the game….This is definitely not going to be a game without a special effects budget.”

The abilities you choose when building your character, from selecting their clan to their powers, affect how you play through various missions in a way reminiscent of Dishonored and the last two Deus Ex entries. During our demo, our player had access to an ability that would let them turn into mist. This is mostly useful for traversal, letting you use vents to reach secret areas and sneak behind foes.

Like the original game, you can also often talk your way out of conflict without ever killing a single soul. During the demo, our vampire was able to bribe a guard to let us into a restricted area with 50 bucks. This gave us free rein to explore, with other guards ignoring us while we searched for a way forward.

Bloodlines had a number of richly written characters, from the Machiavellian Prince Sebastian LaCroix to the anarchist with a secret to hide, Nines Rodriguez. I asked if some of them might be making an appearance in the sequel. I expected a “no,” but got something more promising, if cryptic. “If you have some favorite characters,” says Ellison. “We might try to put them in somewhere but we’re not going to talk about it right now.” She also notes that this Bloodlines does exist in the same timeline as the first: “You might find some of the characters will reference events that happened in that game.”

Combat Is More Dynamic This Time Around

Bloodlines has a lot of virtues. Its combat, with numbers leaping out of bullet-sponge enemies, is not one of them. Luckily, Hardsuit is aware of that issue and is making combat more dynamic. Leiker says “The first game relied on standard combat mechanics. We’re more focused on giving the player the experience of being a vampire. It’s focused on expressing your vampireness against different types of foes.”

To the extent of our demo, “vampireness” seems to translate to “nearly indestructible killing machine.” Most of the enemies our character comes up against are humans trying to hurt the vampire with knives and bullets, which do little damage. On the flip side, it takes mere seconds for the demoer to rip through four goons armed with assault rifles.

The combat is amusing to watch, with superhuman punches and kicks sending foes flying against the wall with bone-crunching force, only for them to goofily ragdoll to their deaths. During the demo, I also watched our vampire use blood magic to make enemies puke blood and lob sticky grenade-looking globs that deal damage to anyone caught in the goop. In other words, there’s a lot in Bloodlines’ toolset o’ death to like.

Check back later in the week for an interview with the makers of Vampire: The Masquerade – Bloodlines 2. In the meantime, read our hands-on impressions of the game here.