I'm a barbarian and I'm wielding a colossal greatsword. In front of me is a knight with their shield raised and their sword pointed menacingly towards me. To get the upper hand, I'm gonna have to power up my blade. Broken Edge is a VR duelling game where each class has a special move that infuses their weapon with magic. But this being virtual reality, I can't just push a button to trigger it—I actually have to do it. But here's the problem. I'm playing the game in a demo booth at Gamescom. I'm surrounded by strangers I've just met. I'm hot and sweaty. I'm unfamiliar with the room I'm in. So I'm not fully getting into it, which I quickly discover is mandatory for this game. To succeed, I need to believe I'm the barbarian.

To power up the barbarian's greatsword I need to swirl it around my head in sweeping, dramatic circles. It needs to be a big, exaggerated movement for the game to register it. But I'm stiff and self-conscious, meekly spinning the Meta Quest 2's grip controller in vague circles and failing to ignite my weapon with the requisite magical energy. Someone from developer Trebuchet tells me to loosen up. I watch him do it, and he IS that barbarian. He's half crouched, striking a pose, spiralling that thing around his noggin like a windswept warrior from the wilderness of death. His greatsword fizzes with energy and, yeah, okay. I get it now. 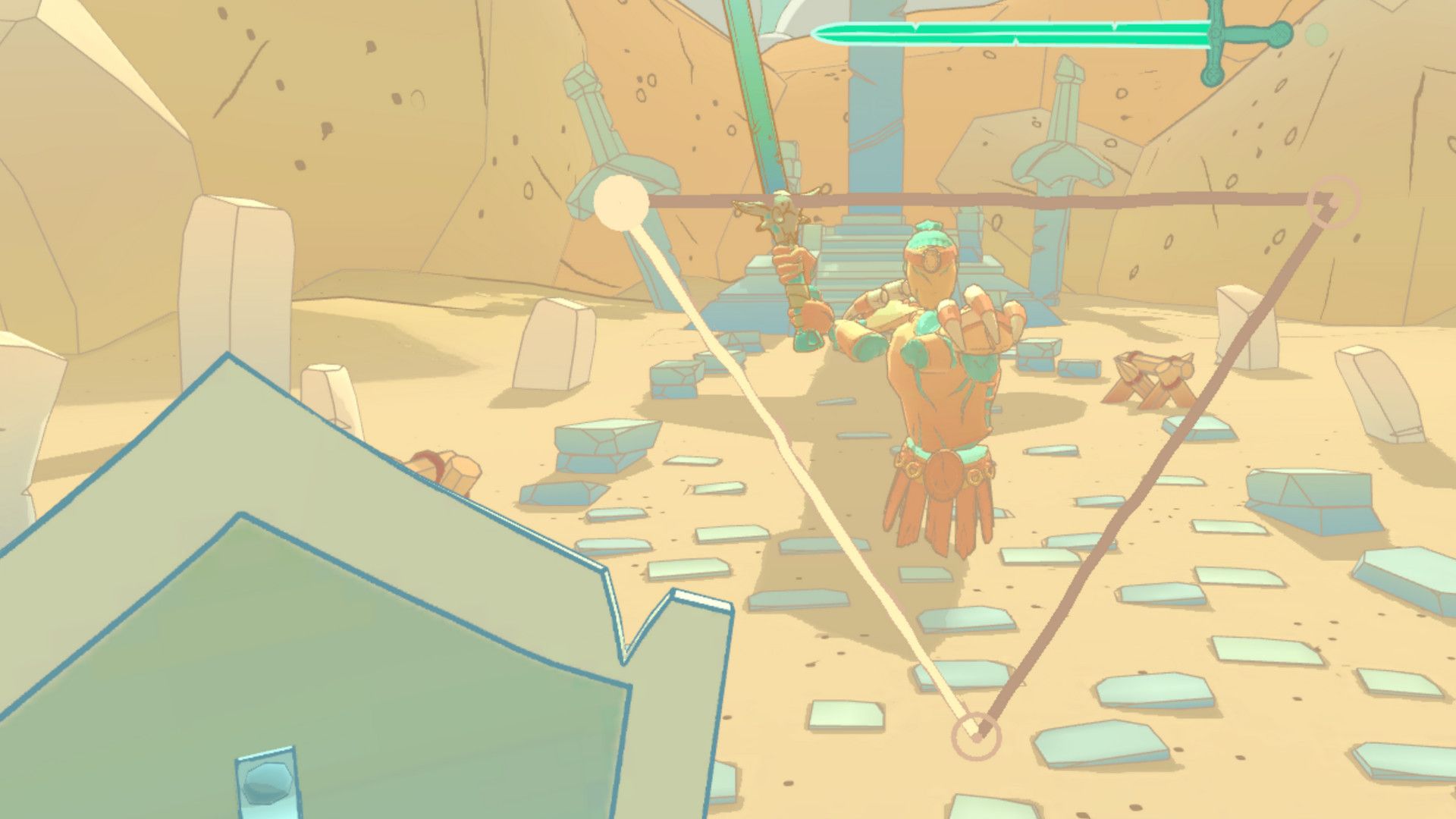 I match his movements, forget about all the people gawping at me, and embody the spirit of the barbarian. I swoop the blade in orbit around my head, doing it as theatrically as I can, and it works. I'm now powered up and ready to charge into battle. It's pretty exciting. Broken Edge is a VR game where movement and physicality are fundamental to the experience. It's not one of those virtual reality experiences where you just plant your feet or sit on your ass and watch passively while stuff happens around you. Here you really have to fight. I mean, not really. But it feels like it. You lunge, sidestep, strike, and sweat.

Trebuchet is designing Broken Edge with competitive play in mind. It's not a game that spins an elaborate illusion to make you feel like an elite fighter without having to put any effort in. It's all about patience, timing, and mastery. You have to study your opponent, bide your time, and wait for an opportunity to strike. The classes—whether you're a fencer, samurai, or other historical melee brawler—are wildly different too. They each have their own combos, strengths, weaknesses, and distinctive play styles. This is a fighting game in spirit, and knowing what your foe is capable of is just as important as mastering your own moves.

I love the art style too. The obvious thing would have been to make a game like this look dark, medieval, and mud-splattered—like Chivalry or For Honor. But Trebuchet has opted for a more stylised look, with cel-shaded characters, a uniquely vibrant colour palette, and surreal fantasy battlegrounds. It's an ideal game for the Quest too, because the last thing you want when you're in a battle to the death is a wire trailing behind you. But if you like the sound of it, just remember that you really have to give yourself to it. You gotta think like a barbarian and heave that blade heroically around your head like your actual life depends on it.