Bzigo wants to make it easier for you to zap mosquitoes in your home. The Israeli and American startup combines artificial intelligence with a laser pointer and camera to autonomously track a mosquito inside your home.

Using computer vision, Bzigo detects mosquitoes within minutes of when they enter a room and at a distance of up to 26 feet (eight meters). Upon detection, the system trains a laser pointer on the mosquito and sends a notification via Wi-Fi to the user’s phone.

This indoor-only solution allows you to identify the location of the “buzz” and to easily eliminate the pest (using your own swatting resources). Bzigo says this ends the inconvenience of hunting for mosquitoes in the middle of the night. The product will be on display at CES 2020, the big tech trade show in Las Vegas this week.

And in the future, Bzigo plans to create anti-mosquito technology in the form of micro-drones that will eliminate mosquitoes autonomously before returning to the base for recharging after carrying out their mission. 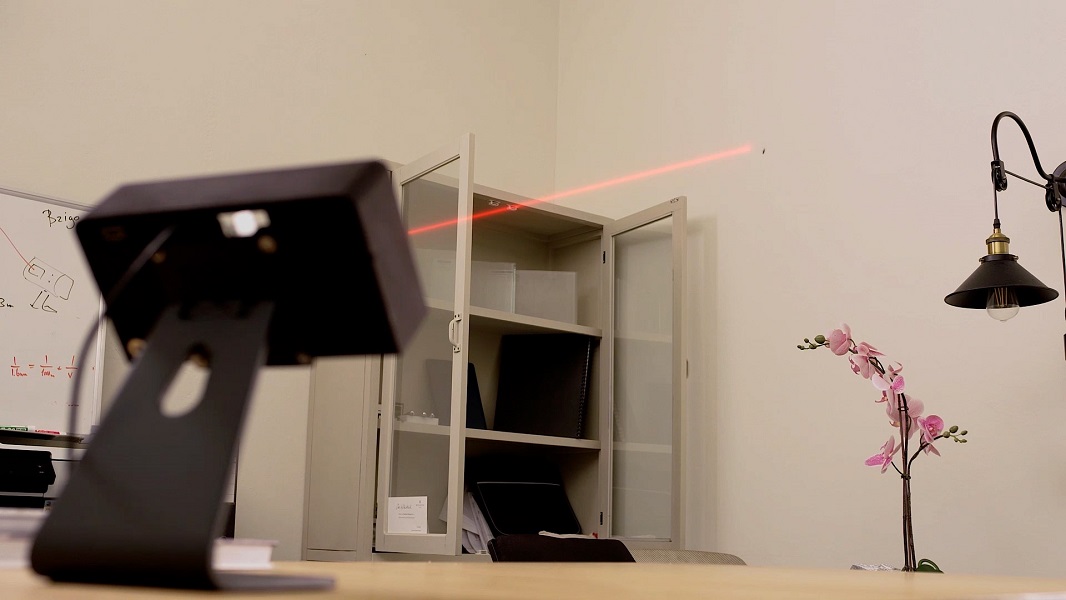 Saar Wilf, chairman of Bzigo, said in a statement that no one wants to wake up and spend 15 minutes searching for a mosquito in the middle of the night.

Nadav Benedek, CEO Bzigo, said that mosquitoes are adept at avoiding human vision and then attack us when we don’t notice. So Bzigo was engineered to address this challenge. In an email, Benedek said he came up with the idea based on his childhood memories, as his father used to come in before bedtime and spend 10 minutes searching for mosquitoes. Benedek would often wake up with mosquito bites.

He started the company in 2016 and his team in Tel Aviv spent three years of research and development to create the AI-based mosquito locator. 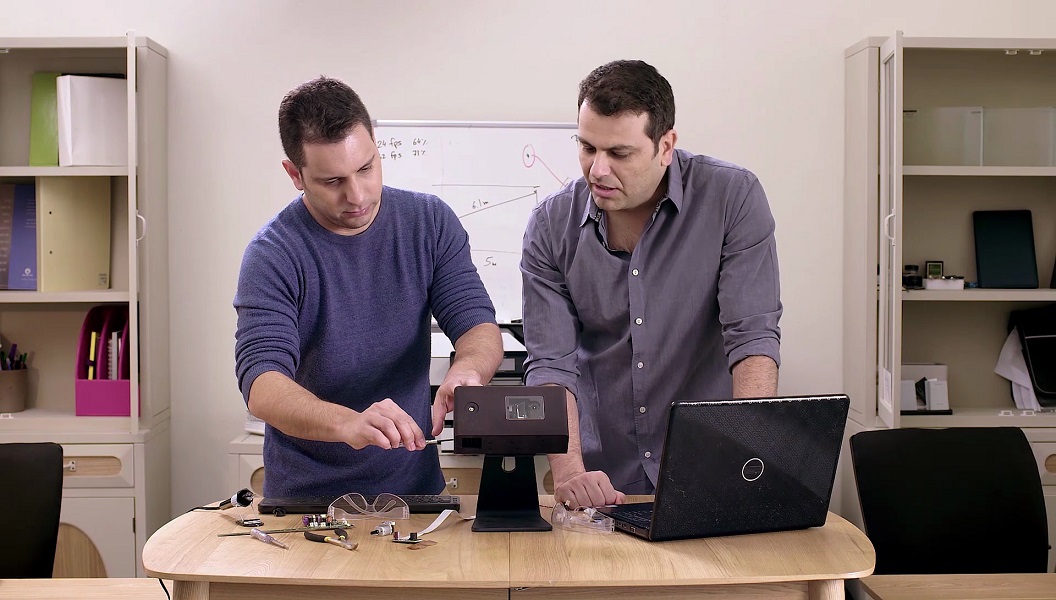 Above: Bzigo researchers operate out of Tel Aviv.

Repellents may offer partial protection for a few hours at most and require constant re-application to the skin. In contrast, a Bzigo device can be placed in any room to provide round-the-clock safe and effective mosquito protection, the company said.

Bzigo’s infrared camera uses unique optics and it has a processor running computer vision algorithms to actively scan the room, differentiating between a mosquito and other pixel-size signals, such as dust or sensor noise.

While the initial application of the system is intended solely for home use, Bzigo intends to optimize the technology for industrial usages such as pest and insect extermination in greenhouses and large farms, as well as deter other pests, such as pigeons.

The initial product handles the hard part of locating mosquitoes, while the attacking part is relatively easy. But the micro-drone will complete the product in the future. You place the Bzigo on a flat surface or attach it to a wall.

It actively observes the room and looks for flying mosquitoes. Once it lands, Bzigo marks its location and notifies you. It uses a very low-energy laser, dubbed Class 1, and it isn’t harmful if it hits the human eye, the company said.

The Bzigo device identifies mosquitoes based on their flight patterns, continues to track them while they’re moving, and can even track multiple mosquitoes simultaneously.

The mosquito landing is a trigger for a push notification and the laser pointer. If there are multiple mosquitoes in the room, it will designate the mosquito that has landed most recently.

Most people think that mosquitoes are constantly flying because that’s when we notice them, but they’re actually very weak and need to spend most of their time resting. Bzigo has a field of vision of 120 degrees by 80 degrees. Most mosquitoes like to land on the ceiling — and by mounting the Bzigo device in a corner facing upwards, you see most of the target area.

The company said it is constantly working on improving all aspects of the device including the viewing angle, but the current model already has more than adequate coverage. 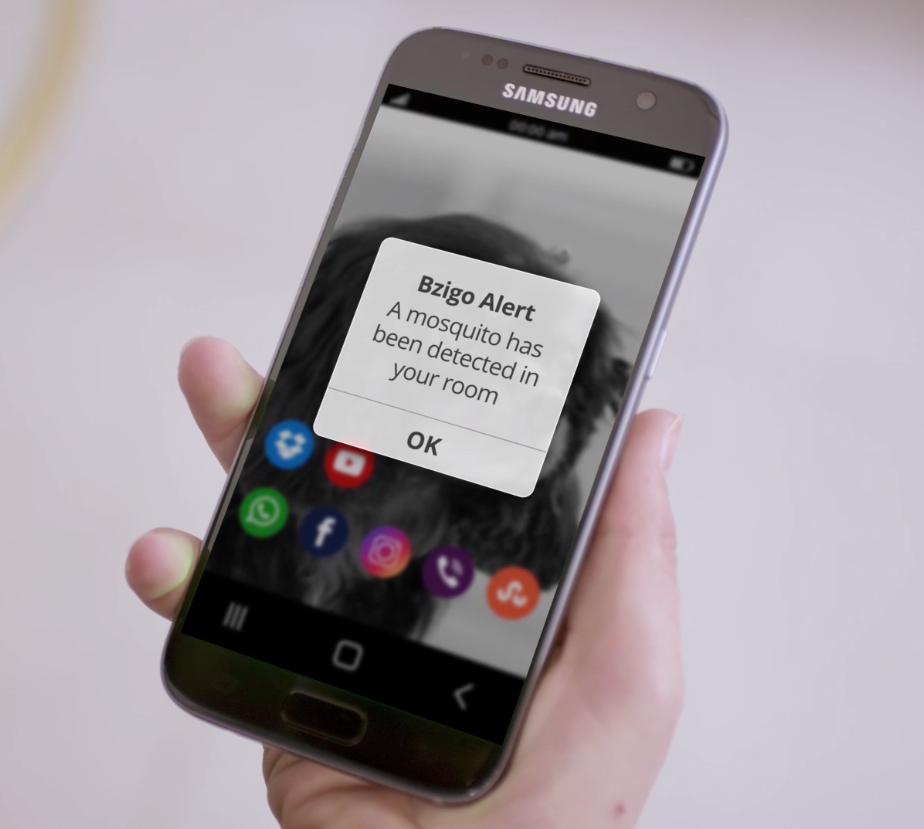 Above: Bzigo notifies you on your phone when it has found a mosquito.

According to the World Health Organization (WHO), mosquitoes are the worst of all disease-transmitting insects. They spread malaria, dengue, and yellow fever, which together cause millions of deaths annually. Even in developed countries, people are threatened by dengue, West Nile virus, Zika virus, chikungunya, yellow fever, and other mosquito-borne illnesses.

In addition to the fatal cases, hundreds of millions of people are struck by these diseases each year. There are 20 million cases a year of dengue alone, with 2.5 billion people worldwide at risk of infection in more than 100 countries, and nearly half of the world’s population is at risk for malaria.

The company said that consumers spend over $10 billion a year on inefficient mosquito products. And studies show that only 0.2% of insects killed by bug zappers are mosquitoes. Bug zappers do not work well since mosquitoes are not attracted to light. Zappers kill inconsequential moths and flies and may even kill insects that would eat mosquitoes.

Mosquito nets are very effective, but they aren’t convenient for many situations. 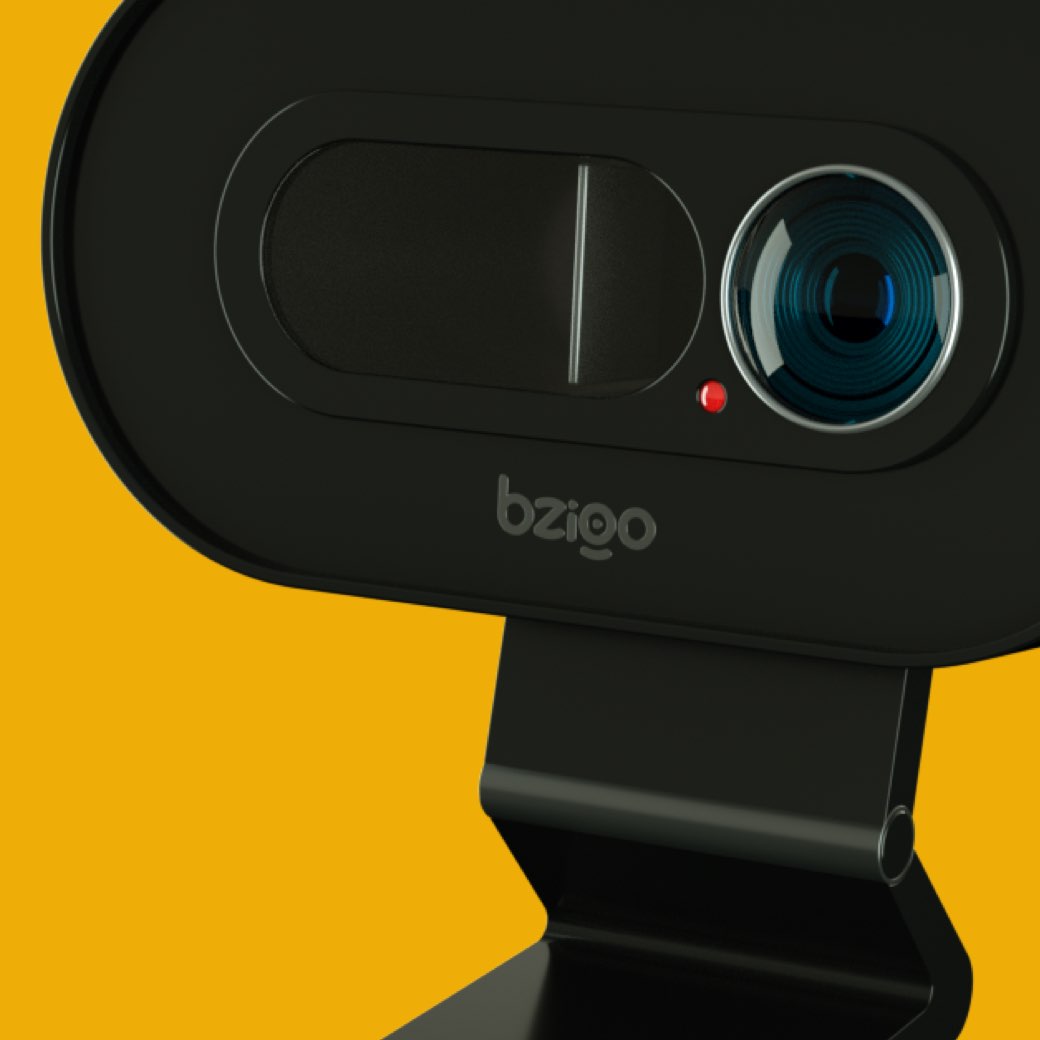 Above: Bzigo’s next version will feature micro-drones that kill mosquitoes.

Bzigo is scheduled for delivery to customers in 2021. However, for an initial payment of $9, anyone can reserve their Bzigo on a first-come, first-served basis, on the official website bzigo.com. By reserving now, customers will receive a $30 discount, as well as receive their
Bzigo ahead of its official release. Refunds will be available at any point before delivery.

The company was founded in 2016 and it has 10 employees. Bzigo has raised $1 million to date, primarily from Wilf, who founded Fraud Sciences (acquired by PayPal), Trivnet (acquired by Gemalto), ClarityRay (acquired by Yahoo), Pointgrab, and Deep Optics.

And it is now raising its next investment round, targeted at bringing Bzigo to market and supporting future development.