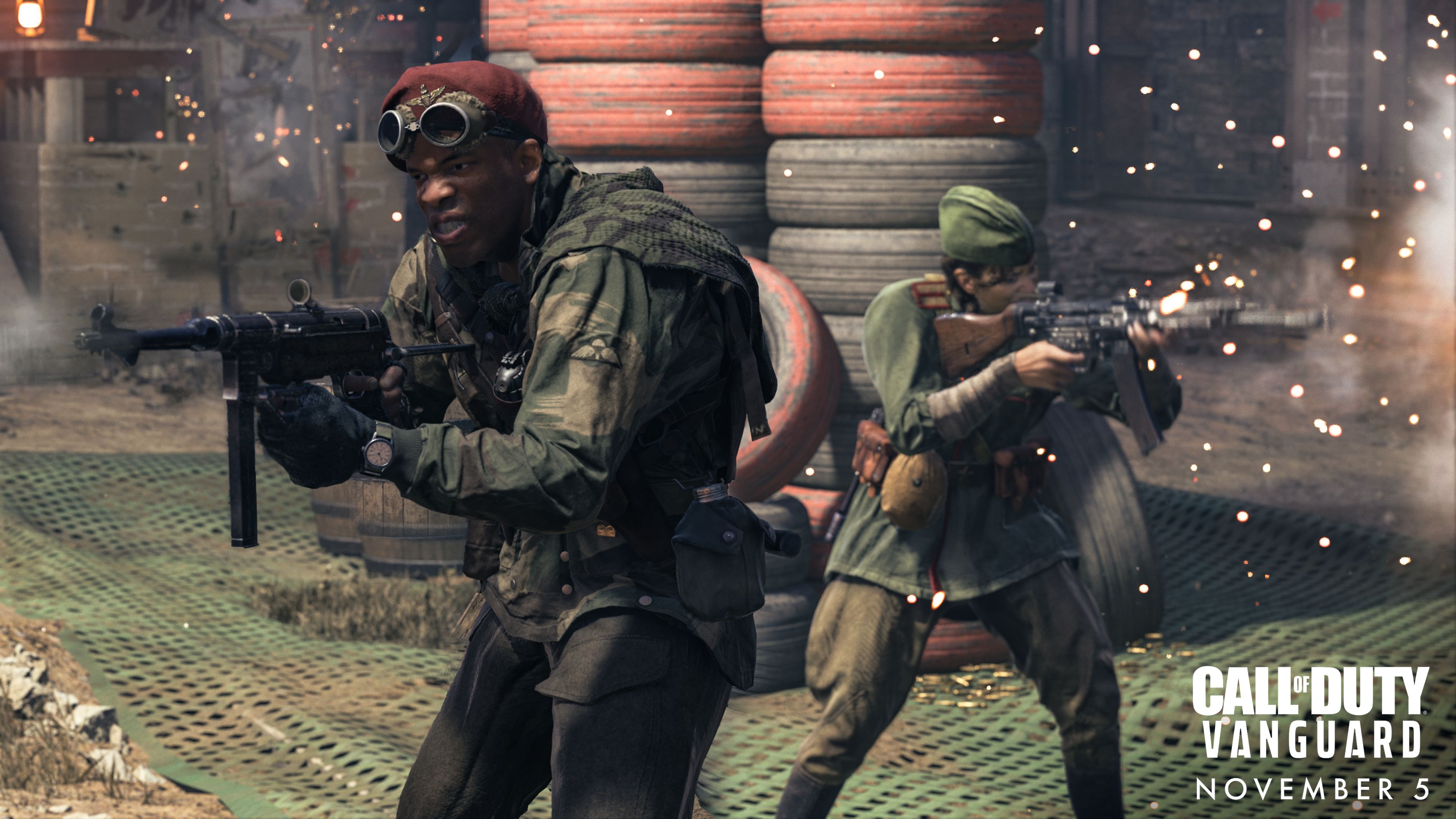 GameCentral goes hands-on with this year’s new Call Of Duty and tries to work out how the game is likely to compare to Battlefield 2042.

There’s an indomitable resilience to the Call Of Duty franchise. It’s sat at the height of relevance in the gaming field since 2007 and despite many pretenders to the throne, it’s always guaranteed to be one of the top sellers of the year, no matter how well individual entries might seem to be received. The franchise’s resolve to always put out a product for the Christmas period, no matter the circumstances, is almost intimidating – if not to ordinary gamers then certainly to Activision’s would-be rivals.

That feels especially pertinent when discussing Call Of Duty: Vanguard. Many big titles have missed their projected deadlines thanks to the coronavirus but Call Of Duty marches on. Not even the State of California suing Activision Blizzard over an alleged culture of sexual harassment, as backed up by many testimonials of current and former employees, has seen the title baulk. Like death and taxes, a yearly Call Of Duty is one of life’s few certainties.

On top of all those external concerns, the franchise’s closest competitor, EA’s Battlefield 2042, has been attracting nothing but positive interest since its debut earlier this summer. Call Of Duty’s decline has been predicted before and never happened but this year presented a steep challenge even before Vanguard was revealed.

It’s with all that in mind that we sat down to play the multiplayer of Sledgehammer Games’ latest title. Spending three hours with the game, there was one thing that we were trying to parse. Shedding away the circumstances that surround it, something still seems elusive: what is Call Of Duty: Vanguard?

Despite what detractors might say, Call Of Duty isn’t the same every year. Each Call Of Duty does, despite having similar trappings, feel distinct. Black Ops doesn’t feel like Modern Warfare, which didn’t feel like WW2, which didn’t feel like Infinite Warfare. It’s all military gunplay, but their tones, settings and focus do have a clear delineation. But until now the hook for Vanguard hasn’t really been made clear. It’s set during the Second World War, but so was Sledgehammer’s last outing – and many Call Of Duty games before that. So what makes Vanguard, Vanguard?

Well, after three hours, that tone has come out just a little more. This is WW2, but with less emphasis on reverent authenticity and more on boisterous fun. It’s like a trip to the Imperial War Museum with your loudest, pub-going friend. Soldiers scurry around packed battlefields, explosions going off while one of them shouts, ‘Circle of life, d***head!’ after getting a kill.

It’s hard to parse if that’s alluring or off-putting, much like a football chant on the Tube – great fun if you are in on it, an atrocious commute if you are not. However, at least from what we played, it does seem to be branching out from the grandiose stoicism that often comes hand-in-hand with media set around WW2.

Let’s get into specifics though. During the three hours, a smorgasbord of multiplayer maps were served up. Although that does mean there was no insight into the campaign, Zombies, and the ever-popular Warzone. This was all arena multiplayer. One thing is clear though, Call Of Duty: Vanguard has variety. From game modes to maps to loadouts to team sizes, if you like arena shooters Vanguard will be bringing something to the table for you.

One of the biggest contrasts in the game comes between the Tactical and Blitz versions of each mode. Tactical is akin to your more traditional Call Of Duty games, with two teams of six players each. Blitz on the other hand has many more participants, even though you’re playing on the same maps. 24 vs. 24 players going up against each other on a map where they were just playing a 6 vs. 6 game create madness, which is obviously the point.

Personally, it was a little much, the flow of battle becomes hard to parse with the constant dying, respawning and killstreak rewards going off one after the other. It’s mayhem, and it felt hard to ever get a real handle on the game before someone inevitably ran into you and killed you. However, if you want that experience, Vanguard offers it.

The big new mode is called Patrol, which is a somewhat odd take on King of the Hill. The objective is to stay within a roaming ring that is slowly travelling around the map. It creates this weird dynamic where to earn points you need to both keep up and defend a point while the enemy knows exactly where you are. It doesn’t sound like it should work, but it creates a bizarrely focused gameplay loop that is actually pretty satisfying.

Keeping up with the slow-moving circle adds a nice sense of focus. Although one of the most compelling examples was when a match didn’t fill and it only had three players on each side, which made the action feel more tactical and deliberate. However, that isn’t to say that the Blitz version of the mode, where 48 players try to stay in a tiny moving circle around a map, wasn’t a sight to behold.

The usual suspects like Team Deathmatch, Domination, and Kill Confirmed are here too and they hold up how you would expect. Call Of Duty’s snappy and easy to pick up gunplay acts as a solid backbone to all this, a tried and true system that isn’t going to disappoint. There is no hyperbole or trying to repackage the obvious here: Call Of Duty has excellent bones to build on. The combat is exceptional and the classic modes hold up. This is Call Of Duty, and Call Of Duty has always had great moment to moment combat.

Call Of Duty: Vanguard comes to life on its beautiful maps. One of the more definable traits of Sledgehammer’s game is that it’s trying to tell stories across a much wider number of locations than most WW2 games. With the Pacific, Western Front, Eastern Front, and North Africa, there is a lot to draw from here.

A massive Russian square, complete with buildings to hide in and verticality to experiment with; a tighter knit Hotel map created frenetic, close-quarter combat; a Pacific Island, Gavutu, torn apart by war; even a quiet, German base atop European mountains. It really is a trip around the world, a creeping reminder of the sheer breadth of this world-spanning conflict that killed 85 million people.

What’s striking about Call Of Duty: Vanguard is its ability to please anyone looking to get in on military arena shooters. There’s chaos, there’s intimacy, there’s the ridiculousness of Patrol or the simplicity of Team Deathmatch. You can do it all on a big map, or you can do it all on a small map. Sledgehammer Games has created a wonderfully modular multiplayer experience that will allow players to find the fun they are looking for.

And it is fun! Call Of Duty has always been exceptionally solid. The snappy gunfights, the breadth of the arsenal available to you; the game desperately wants to give you the tools to find your own enjoyment with its systems and maps. It’s not hard to find it either. It’s available and readily accessible. If you are looking for a good Call Of Duty time, Vanguard will deliver it.

Call Of Duty: Vanguard exists in a complicated world though. It’s been doing this dance since 2007 and if you were looking for some extraordinary new feature that makes it stand out above others in the franchise, the three hours spent with the multiplayer arena portion didn’t make one immediately apparent. Of course, the broader game will be much larger, with a campaign, Warzone, and Zombies all filling out the experience. However, coming in, looking for that elusive hook, that thing that would define Vanguard… it’s still a little hazy.

With the harrowing accusations against Activision, coronavirus, and the loud noises being made by the competition, Call Of Duty: Vanguard has a lot going up against it. What we got to play was fun and varied, offering experiences to appease as many as possible. However, that also, paradoxically, makes it feel a little less defined. Currently, it’s lacking a clear identity, something that sets it apart from what came previously.

If Infinite Warfare is the far future one, Black Ops is the covert one, Modern Warfare is the current one, and WW2 was the Second World War one, what is Vanguard? The… World War 2 one again? Call Of Duty: Vanguard is fun. Great fun in fact! But is fun, enough? There’s a desire to commune with what Vanguard is putting down, but so far that’s a little hard when the game itself doesn’t feel like it’s quite found its own voice yet.