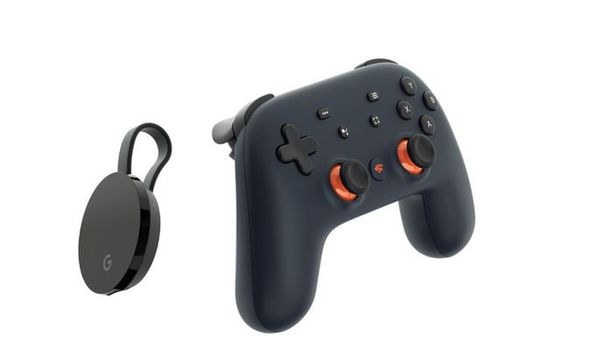 The new Google Stadia Founder’s Edition was announced today and will contain the Chromecast Ultra as its primary hardware offering.

The Founder’s Edition bundle also contains a limited-edition Night Blue Stadia Controller, Three months of Stadia Pro subscription, a three month Buddy Pass to bring one friend along for the ride and first access to securing a Stadia Name.

For those that don’t know, the Chromecast Ultra is a streaming device that plugs into your TV’s HDMI port and provides 4K video and streaming.

With the Google Stadia service, this will make it possible to play on TV, without the need for a console.

The Founder’s Edition will cost $129 to buy and will be the first way to gain access to the service.

Google has confirmed that the Stadia streaming service will be going live in November 2019.

The bad news is that if you don’t need any of the stuff the bundle offers, you will have to wait until 2020 to buy games separately.

After that three-month period expires with your Founder’s Edition, you will then have to pay 8.99 a month to have access to the “Pro” version of Google Stadia.

This service will be the only way to access 4K gaming on Google’s new service and will also come with a range of free games, with the complete Destiny 2 experience announced as the first one.

Discounts will also be part of the subscription, much in the same way as Games with Gold and Sony’s PlayStation Plus service.

“The Founder’s Edition gives our first set of fans the highest quality gaming experience—you’ll get Stadia Pro and the ability to play your favourite games across multiple screens (for those of you with a 4K TV and Stadia Pro, you’ll get up to 4K HDR resolution at 60 frames per second with 5.1 surround sound).

“Stadia Pro will include free content, as well as discounts on titles you buy. The first free title is “Destiny 2,” and it comes with the base game, all previous add-ons, the upcoming Shadowkeep expansion and the annual pass. And after your free 3-month subscription ends, Stadia Pro is only $9.99 per month.

“If you want to pick up an extra controller for multiplayer games, for your laptop or just to keep a spare in your backpack, they come in three colours—Just Black, Clearly White or Wasabi—for $69.99. You’ll be able to access Stadia at launch this November in 14 countries: U.S., Belgium, Canada, Denmark, Finland, France, Germany, Italy, Ireland, Netherlands, Norway, Spain, Sweden, U.K.—and we’re working to expand to additional countries in 2020.

“And if you don’t need 4K quality resolution, you can still play your favourite games on virtually any screen with instant access and no downloads, updates, or patches. Coming in 2020, Stadia Base is how you will play games you purchase in up to 1080p resolution and 60 frames per second without an active subscription to Stadia Pro. Stadia Founder’s Edition is the first way to get Stadia in November.”

When it comes to gaming support, Ubisoft has announced a lot of their latest games will be available on Stadia from Day One.

Bethesda is also throwing in their support with Doom Eternal and Rage 2, while Football Manager 2020 is going to be another launch title.

FM 2020 sounds like a perfect title for the new service as it will give gamers a new way to enjoy an established franchise.

Being able to play the full-blooded version of Football Manager on your phone will no doubt prove popular with fans.