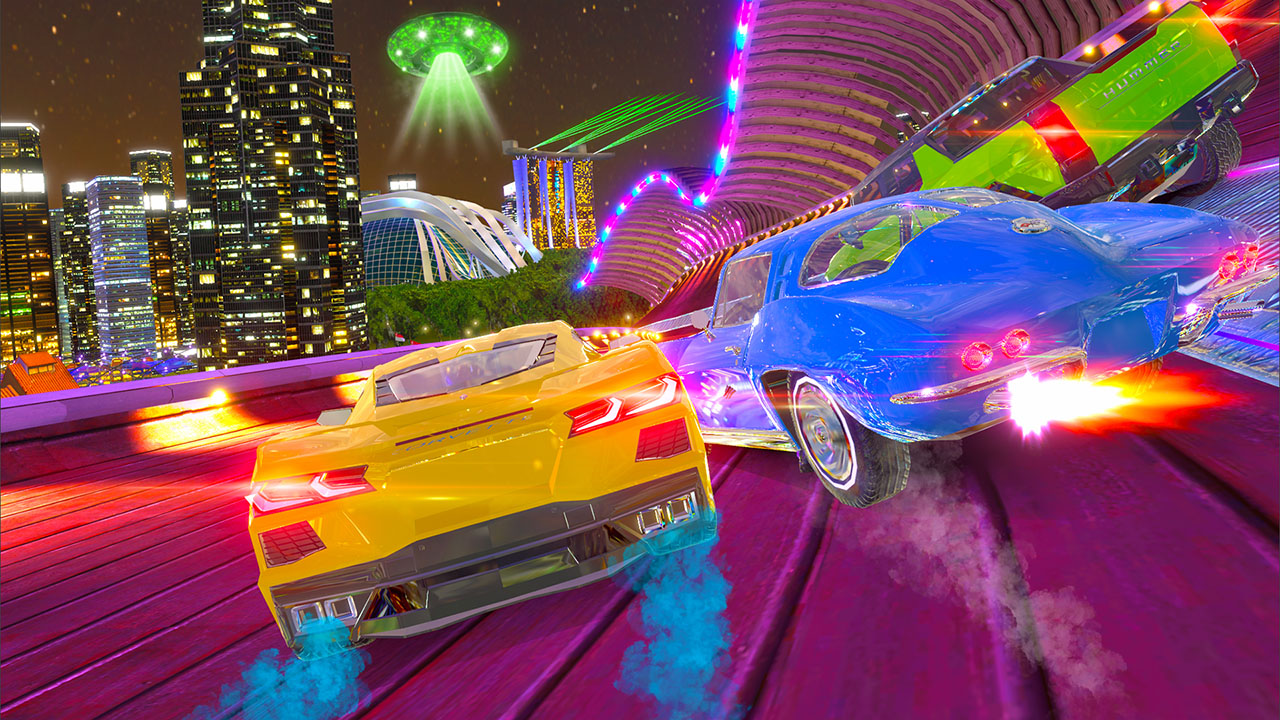 A reader offers his opinion on the recent revival of N64 era racing franchise Cruis’n and finds a fun, if expensive, arcade racer.

Of all the arcade racing franchises Nintendo have put on ice over the years, I don’t think Cruis’n was many people’s first, or even second, choice to be thawed out. Originally released in arcades by ‘90s giant Midway and serving as a sort of misleading advertisement for Nintendo’s up-and-coming Ultra 64, Cruis’n USA’s N64 port and its two sequels were a breath of fresh air for racer-starved N64 fans.

But Cruis’n never rose to the heights of competitor’s offerings like Ridge Racer or Sega Rally and, aside from one appearance apiece on the Game Boy Advance and Wii in the early 2000s (thanks, Wikipedia!), the series laid dormant until 2017, when it returned to where it all began: the arcades.

Cruis’n Blast’s developer Raw Thrills is an interesting one. Opened by Robotron: 2084 and Smash TV’s Eugene Jarvis, alongside several Midway veterans, they have predominantly focused on coin-ops based on diverse, lucrative licences like Jurassic Park, The Walking Dead, and Halo. Considering their arcade pedigree, and presumably some staff’s history with Cruis’n games specifically, Raw Thrills seem like perfect candidates to bring the racer back as a coin-muncher.

A bigger challenge is creating a meaty console experience. Giving players a quick, one-off thrill while waiting for a movie to start is one thing, but console players expect more breadth and depth before they hand over their money. Does Cruis’n Blast have enough under its hood to be enjoyable beyond a few pound coins’ worth of play?

After booting up the game you’re greeted with a scant amount of play options, but all the important race modes are represented. Aside from the tour and time trial options, players can engage in competitive or cooperative play either on online or offline. Raw Thrills were also decent enough to include the arcade version, so while there may not be a huge plethora of options, those that are here offer a good, if not great, amount of variety and replay value.

Tour mode makes up the main meat of the game. There are six tours, each consisting of four short tracks, and players must obtain certain podium places to progress. Each adheres to a specific theme like dinosaurs, wild weather or police chases, but these barely alter the play experience. It’s hard to tire of racing through a tornado or biting at the heels of a giant rolling donut after a chopper attack, but these events are very scripted and don’t alter the track or add challenge when racing.

Aside from a tour where aggressive police shunt the player and cause problems, these modifiers are there purely for spectacle. These seismic events would be a good excuse to change the tracks dynamically and force players to react and change tactics on the fly, but as is they are purely window dressing.

The driving itself is fun, fast, and simple. Boosting is the order of the day, and even novice players can reach some crazy speed through power sliding and hitting boost pads or through fastidious use of the limited turbos you get for each race. Racers can also take competitors out, Burnout style, by ramming them into barriers, and perform tricks in the air using power slides and wheelies.

Frustratingly, these moves don’t affect your performance and only reward with some extra currency to spend on new vehicles or to deck your current favourite out with gawdy, purely cosmetic customisations. Additional speed for wild, aggressive play seems like a no-brainer, and its absence led me to ignore them and play more conservatively.

Presentation is solid if not great. Raw Thrills wisely prioritise performance over graphical detail, with cars and tracks looking relatively undetailed to allow for a very smooth frame rate. There is good use of lighting and reflections, while the lack of background detail goes unnoticed at speed. Aside from a real earworm of a title song (I sing ‘Cruuuuuuu siiiiin!’ in the shower now), music is pretty unmemorable, while the vehicles growl nicely and other audio details, like crashing and sliding, are well done. There are some appalling load times between races though, which is very grating due to the short race lengths.

While there isn’t a lot to master, there are some real standout courses that beg to be replayed for their audio-visual merits alone. A jaunt through neon-soaked Tokyo being battered by a lightning storm and a prehistoric swamp, where you weave around giant monkeys in the middle of an argy-bargy, are just a couple of memorable moments, and the game sensibly jettisons any notions of realism in favour of imaginative design.

This wackiness also extends to the cars you can unlock through progression and by finding hidden keys throughout tracks. The initial, boring selection of sports cars are soon joined by much more outlandish transport like fire engines, UFOs, and even dinosaurs. While unlocking them is a nice way to add longevity, they are too similar in how they work and only differ in stats like handling and acceleration. This seems like a real missed opportunity, and I stuck with the same couple of cars for my entire playthrough, as individual cars will gain experience and rank up the more you use them.

Cruis’n Blast is a deeply flawed game, but I’d be lying if I said I didn’t enjoy it. It is shockingly overpriced for what you get – £35, which is nearly Mario Kart money! – and it lacks the depth or variety of the genre’s best. However, for a quick pick up and play on the bus or a bit of multiplayer fun with friends, it’s an enjoyable throwback to gaming’s past. At the end, Cruis’n Blast is the most ‘90s thing of all: a rental.