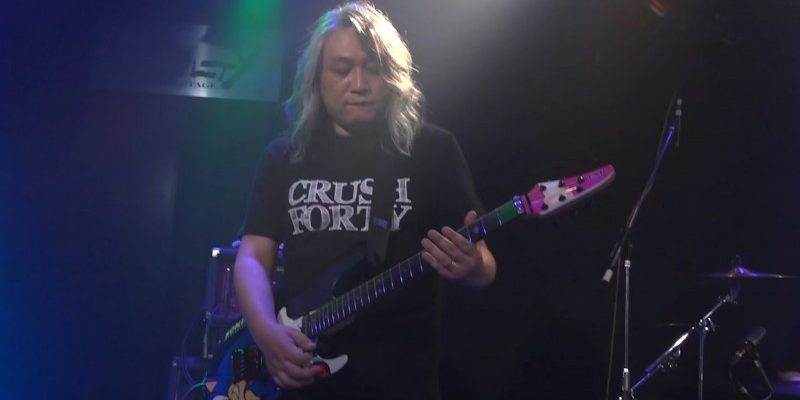 The early Sonic games were renowned for their music, so when the sound changed from its more traditional video game-style fare as heard on Genesis and Sega CD to the hard rock music that floods the soundtracks of modern Sonic games, it was a big risk. However, Sega was able to effectively usher in the modern era of Sonic music thanks in large part to Crush 40, a band fronted by vocalist Johnny Gioeli and guitarist Jun Senoue. Gioeli, a longtime rock veteran, has fronted several bands including Hardline and Axel Rudi Pell, while Senoue began working on Sega’s sound team on games like Sonic the Hedgehog 3 and Sega Rally 2.

While fans of the modern era of Sonic games are familiar with the band’s many tracks, which include beloved songs like “Open Your Heart,” “Live & Learn,” and “Sonic Heroes,” new or lapsed fans had an excellent excuse to dive into the sounds of Crush 40 during last month’s Sonic Symphony 30th Anniversary concert (you can watch the whole thing here). Following the positive reception of that virtual performance, we reached out to Senoue to learn more about his time working in games, the formation of Crush 40, and the band’s biggest hits.

Prior to starting work on the Sonic franchise, what were your impressions of the music in the games to that point?
The first soundtrack album I purchased was a cassette tape featuring the music of Namco’s arcade games in the mid-’80s, and I still own it. I remember that those games were released in North America by Atari back in the day. At that time, I recognized game music as repeating impressive phrases with a limited number of notes. I loved the first Sonic The Hedgehog game released on Sega Genesis in 1991, including its music, and that was the reason I picked Sega to apply for in 1992, and here I am.

When you first started working with Sega on the Sonic games, you said that you used to have to send demos to the U.S. by boat, then they would give comments via fax. How did that process evolve over time as technology grew more advanced?
When we worked on Sonic The Hedgehog 3, the development team was in the suburbs of San Francisco, Calif., and the Sega Sound Team I belonged to was in Tokyo. I never met [lead programmer Yuji Naka], [lead designer Hirokazu Yasuhara], and [Sonic 3 designer and current head of Sonic Team Takashi Iizuka] in person during the development process at that time. It was a unique experience in that era that we sent the DAT tapes by airmail to the development team for their reviewing and received their impressions via fax.

Both the development team and I were in Tokyo when we worked on Sonic Adventure, and we worked on Sonic Adventure 2 and some other titles during our San Francisco days. I worked with the development team very closely, so we all exchanged opinions on game design, structures, characters, story, and music every time. After all, it’s all about communication. If you can communicate with the team members in a good relationship, I don’t think there is any problem since you can send the data anywhere in the world nowadays.

When Sonic made the jump to true 3D with Sonic Adventure, the soundtracks also evolved in impressive ways. What were the discussions like when talking about the direction the soundtrack should go with this new era of the franchise?
At the very early stage, some direction of music had already been shown as a franchise. One was the music on the Genesis games and another was dance music which was used on a non-US version of Sonic CD or Sonic R. I was a sound director and lead composer on Sonic Adventure and we wanted to change a lot of things drastically, including the way of its music. There were many characters who were playable characters, and they had come to speak for the very first time. Using English lyrics and a variety of musicality meant better expressing their personality and attitude. The core musicality… (i.e. guitar-driven rock-based music) was delivered with great confidence at that time.

How did you go about forming Crush 40? How did Johnny Gioeli’s name enter your mind to be the vocalist of the band, and how did you go about recruiting him?
There were 6 vocal songs on Sonic Adventure, and I remember finishing its main theme “Open Your Heart” at the very end. I liked the performance on the album that Johnny released as Hardline in 1992, and I wanted to team up to make something with him someday. I found that Johnny returned to the scene as a singer for the German guitar player [Axel Rudi Pell] in 1998, so I made a contact with him through a common acquaintance. Then, we first met at the studio in the suburbs of Los Angeles to record “Open Your Heart” in September 1998. From the moment the riff came up to my mind, I wrote that song on the assumption that he would sing on it, so the result was what I expected. We enjoyed working together and wanted to do  more, so we formed Sons Of Angels in 1999 to do the soundtrack for  an arcade title. It was for NASCAR Arcade, and we finished seven songs in total. Writing a song together for the first time was something special. Next, the second song we did for the Sonic franchise was “Live & Learn” on Sonic Adventure 2.

When you’re making music not only as a rock band, but as a group contributing music as part of a game development team, what does the writing and creation process look like? How does that process differ from when you’re creating a song not for a video game soundtrack?
When I write Crush 40 songs other than games, we do simply what we want to perform as a band. When composing a song for a game, there are situations and themes in which the song would be used. So, preparing  something suitable is the first priority. The tempo of the song is basically determined by its usage in the game.

Crush 40 has had some incredible, popular tracks tied to the Sonic franchise, but “Live & Learn” from Sonic Adventure 2 is perhaps the most beloved. Do you recall any early impressions you, the band, or Sega/Sonic Team had of that song when they first experienced it?
First of all, I came up with the intro only and I recorded that as the title music for the trial edition of Sonic Adventure 2. When I worked in the studio in Los Angeles to record some level music, I set up my own rig in another room in the studio to make some arrangements there. The full structure arrangement of “Live & Learn” came out very naturally and was done in a day. I sent my demo to Johnny and he returned it to me with his vocals and the lyrics on it. It was a perfect fit but I lost that first vocal demo, unfortunately. “Live & Learn” has been popular far beyond our expectations. It is fantastic that some of our songs could be Sonic fans’ special songs of a lifetime.

It’s a somewhat rare occasion to see Crush 40 perform live, but when you do have the opportunity to perform in front of a crowd, what does it do for you to see the fans react in person?
In the first 10 years, we had never been able to have a chance to perform our songs live. We started a full band performance in 2011 when we celebrated Sonic’s 20th anniversary. We always enjoy any opportunity to rock the house. It’s really great to see a lot of fans go crazy with our songs!

We’ve been unable to have live performances with packed audiences for more than a year now, but the Sonic Symphony livestream allowed Crush 40 to perform a virtual concert to more than a million viewers. What was putting that show together like, and how was the reception from your perspective?
Sonic Symphony was basically planned by [the internal Sonic unit at Sega] in California and produced in collaboration with the production company based in Boston. In the case of a full-length show in Japan, the setlist will be 20-plus songs, but this time Sonic Pillar narrowed down the songs as Sonic-related songs, so inevitably our set was filled with theme songs this time. I took care of the performances in Tokyo, Johnny did his own thing in the U.S., and the production company did an awesome job with the European orchestra. I’ve never shown a full band performance as Crush 40 to the fans outside of Japan, so Johnny and I were extremely happy to show Sonic fans around the world what we can do. “Live & Learn” was especially epic. It blended perfectly with an orchestra, and was a great opportunity to celebrate both Sonic’s 30th anniversary and the song’s 20th anniversary.

What does the future of Crush 40 look like? Are you working on any new music at this time?
Thank you for your continuous support. I’m always working on new Crush 40 materials and I cannot wait to show you some new stuff sometime in the near future. Please check out our latest compilation called Driving Through Forever. I hope you enjoy our non-Sonic songs along with Sonic-related songs. I am hopeful that someday we’ll have more chances to bring Crush 40 shows to even more cities. Rock on!

For more on the 30th anniversary of Sonic the Hedgehog, check out our interview with head of Sonic Team Takashi Iizuka about all of the announcements the team made during the Sonic Central presentation in May here. You can also watch the full Sonic Symphony performance (at the end of which Jun Senoue and Crush 40 performed) here. Finally, if you’d like more historical looks at the Sonic series, including why the series experienced such a downturn, why Sonic 2 was Sega’s great hope, and how Sonic made the leap to Nintendo platforms after the Dreamcast was discontinued, check out the articles listed below.