Most people know about Steven Spielberg's connection to WW2 shooter Medal of Honor: that he came up with the idea during the filming of Saving Private Ryan after watching his son playing GoldenEye 64. But years earlier Spielberg was instrumental in the creation of another, lesser known video game: The Dig. This classic 1995 point-and-click adventure, developed by genre masters LucasArts, is the story of a group of scientists and astronauts trapped on a mysterious faraway planet. While searching for a way home they uncover the secrets of a fallen alien civilization—which is where the 'dig' part of the title comes from—and are corrupted by something they find there.

If you love old movies and that premise reminds you of The Treasure of the Sierra Madre, well, it's supposed to. When Spielberg conceived the story he wanted to cross that classic '40s Western with influential sci-fi movie Forbidden Planet. The original plan was to make it an episode of his Amazing Stories anthology series, but he couldn't quite stretch his meagre TV budget far enough. So, with the help of LucasArts, it became a game instead. Monkey Island creator Ron Gilbert and Indiana Jones and the Fate of Atlantis designer Noah Falstein were among the point-and-click adventure veterans hired to bring his story to life, and the result is one of the best sci-fi games ever made. 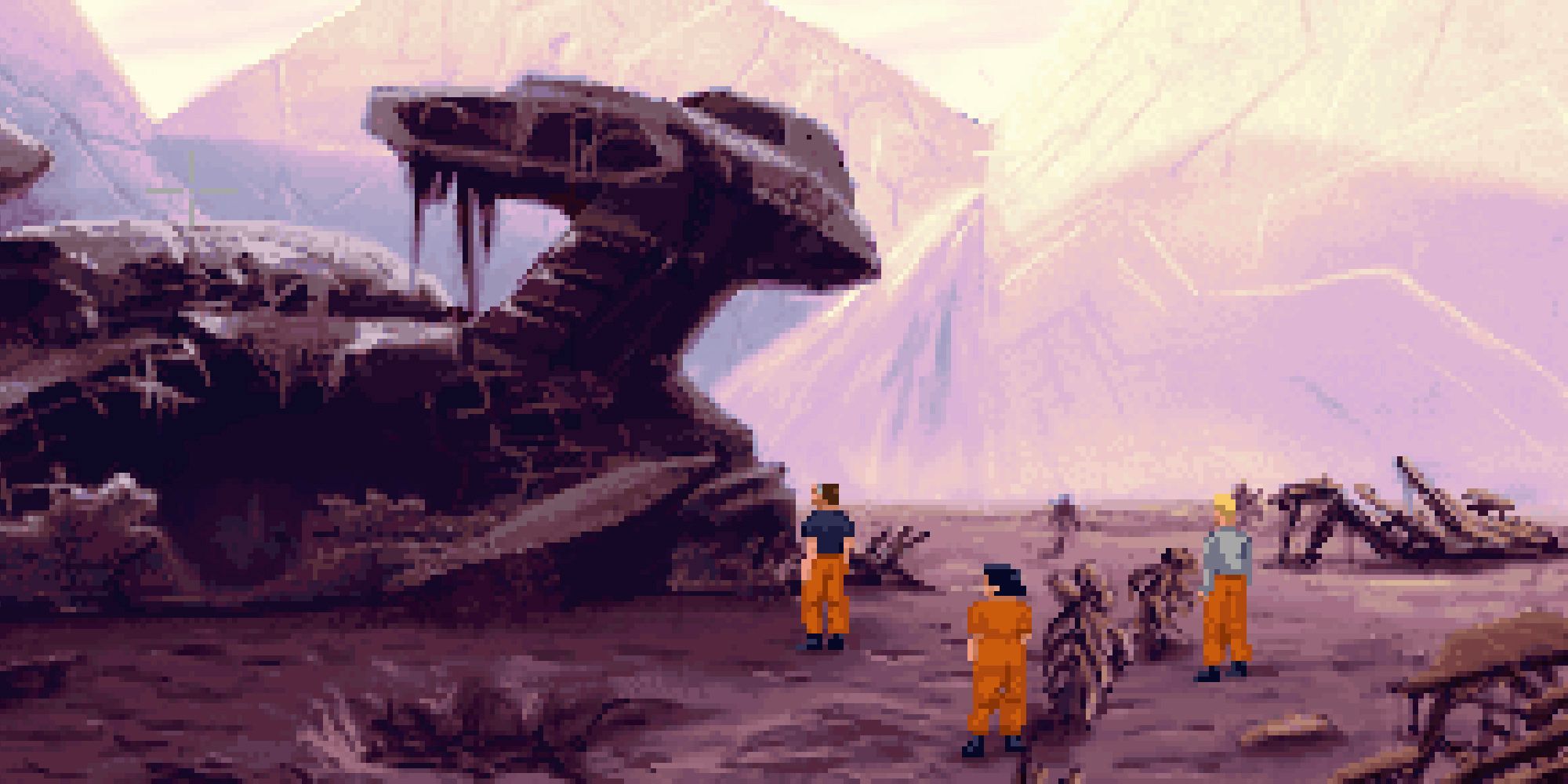 When the game begins, a colossal asteroid is on a cataclysmic collision course with Earth. The governments of the world come up with a plan to knock it off course—the same premise Michael Bay would deploy in apocalyptic cheese-fest Armageddon just three years later. But unlike Bay's motley crew of scrappy miners, The Dig's crew is much more professional. There's cool-headed commander Boston Low (played by Robert Patrick, of The X-Files and Terminator 2 fame), no-nonsense journalist Maggie Robbins, and Ludger Brink, a scientist with a superiority complex. They're an interesting bunch, and their clashing personalities are the source of some excellent drama.

The problem with putting three experts in various fields together is that it's only a matter of time before their egos collide. But this tension is heightened by the fact that there's something on this planet that does something to the human body. But if you haven't played it, I'll leave you to find out what. The Dig's planet is an enigma, like Lost's island or Twin Peaks' Black Lodge. Discovering its true nature, its history, and the things it does to people is all part of the fun. It's an enormously compelling narrative, bolstered by natural-sounding dialogue, confident performances, and a twisting plot that keeps you guessing till the very end. The story alone is worth playing it for.

The planet is never named in the game, but in a tie-in novelisation written by Alan Dean Foster it's referred to as Cocytus: the lowest circle of Hell in Dante's Inferno. That makes it sound nightmarish, but it's actually a pretty peaceful place. There's a sense that the place hasn't been inhabited for hundreds, maybe thousands, of years. It's a thoughtful, slow-paced game, with the mature, understated aesthetic and tone of a classy '70s science fiction movie. But these low-key moments are punctuated by the occasional moment of action—including an encounter with a massive alien spider. Unfortunately, there are some things on this planet that don't take kindly to visitors. 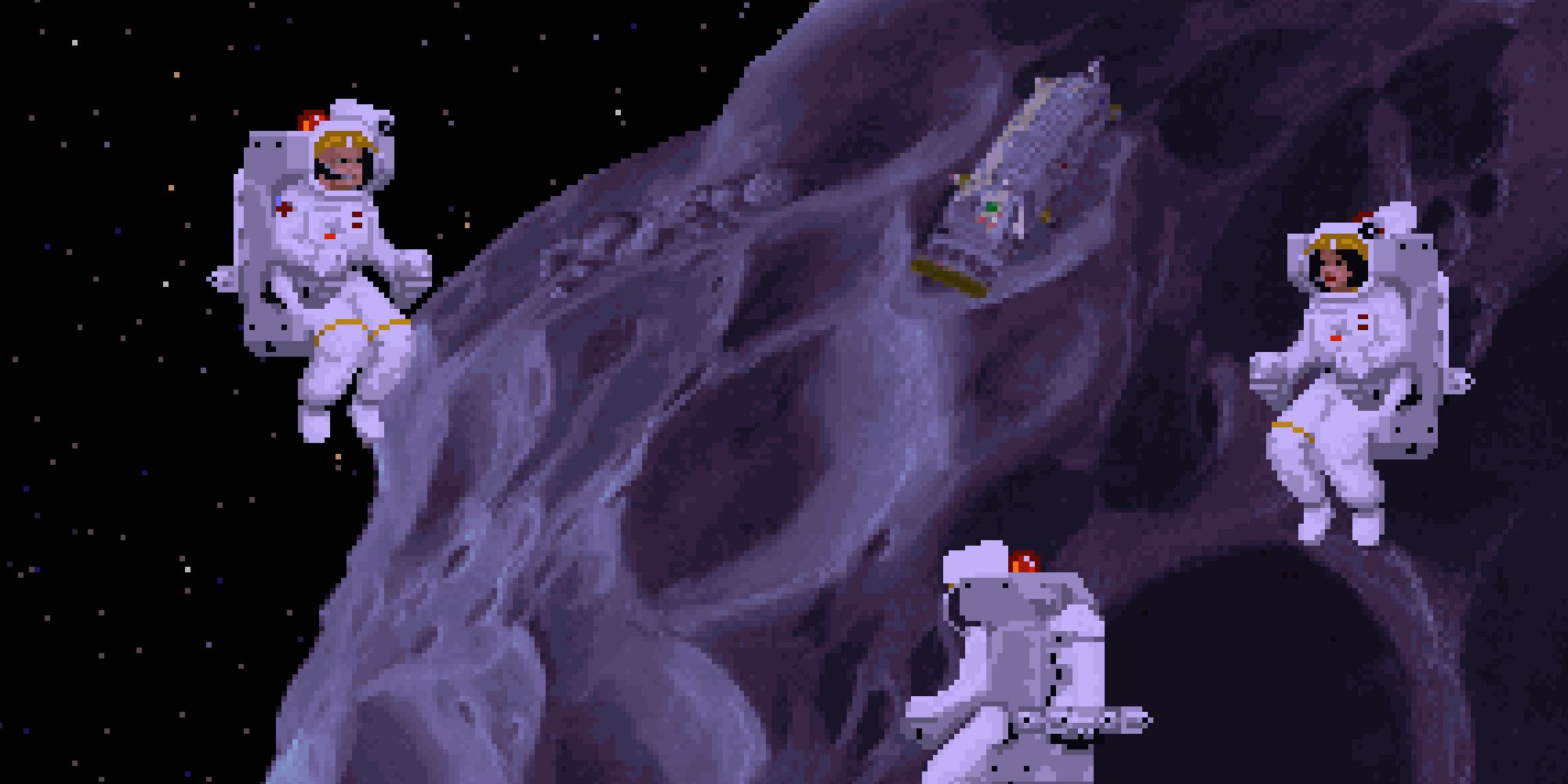 The puzzles aren't quite as good. LucasArts adventures are obscure at the best of times, but the otherworldly, alien nature of this setting makes them even more challenging to get your head around. There are a lot of mystifying orbs, crystals, and bizarre alien gizmos you have to figure out how to use and make sense of—and it won't be long before you start searching for a walkthrough online. But it's worth enduring the worst of them purely to experience its superb sci-fi story, feast your eyes on its gorgeously vivid, colourful art, and spend time with its nuanced cast of characters. There are better '90s adventures out there, but for all its flaws The Dig is unlike anything else from the era.