Cyberpunk 2077 might not be labeled as a hack-and-slash game, but you can always turn it into one. With the way Night City throws everything into your face, players who “stick to their guns” are going to be at a significant disadvantage when a netrunner starts slicing them up at point-blank range. You need a melee weapon for this type of situation.

The limited range is nothing to be afraid of since several perks make it so that you can descend on an unsuspecting target before they have any idea what’s going on. The real trick is making the most of your blows, so finding a unique weapon should be a priority. If you use the best tools, you get the best product. It’s that simple. 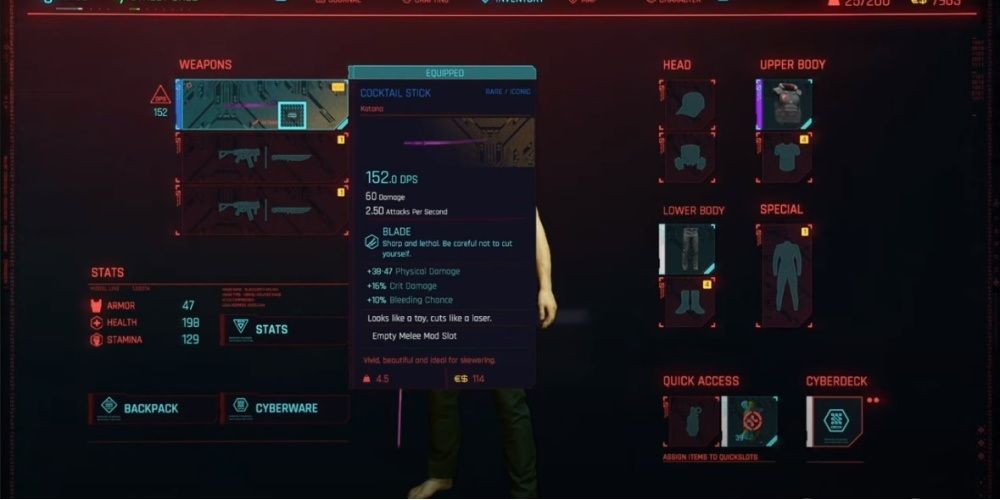 We can only assume that a mistake was made when they coded in the Cocktail Stick. It’s labeled as an iconic weapon but there is no iconic statistic or advantage. Maybe it was only supposed to be a regular weapon? There is some flavor text that claims it, “looks like a toy, cuts like a laser,” but even this is misleading.

It’s the worst iconic melee weapon in the game by DPS numbers alone. It’s pretty funny to be slicing enemies up left and right with a “sword” intended to decorate a drink, but once the hilarity has worn off, you’ll actually find out that a common knife does about five times as much damage as this. 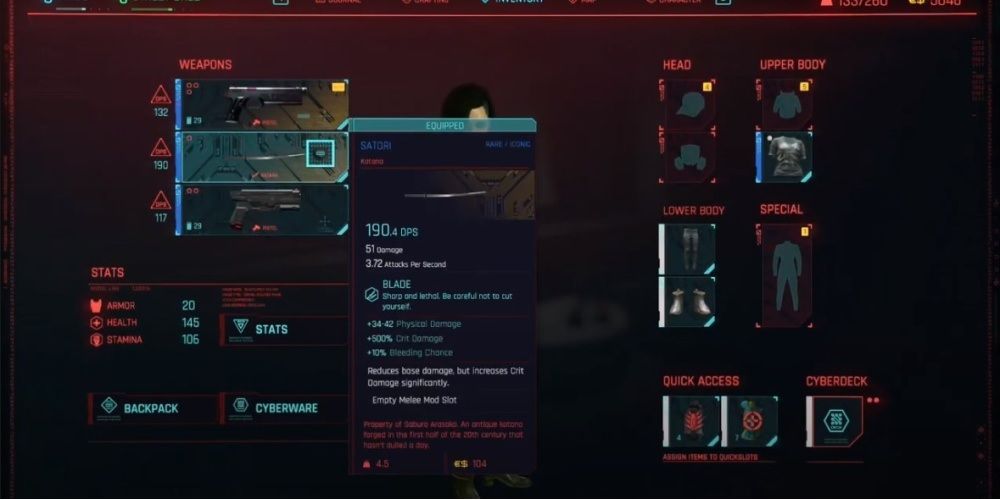 You might be thinking there is some kind of anti-katana bias on this list, but this isn’t the case. Most iconic weapons are mutations of a base weapon and there are technically two katana base weapons. One has the lowest DPS in the game and the other has the second-highest. These first two are based on the lowest. So better katanas are coming up!

The reduced base damage penalty is something this already low-damage sword cannot afford to have. The crit damage is increased significantly, but even a crit with this weapon does not do half of what other weapons on this list can do in a single swing. It’s an interesting concept, but crossing your fingers and hoping for crits doesn’t function well in combat. 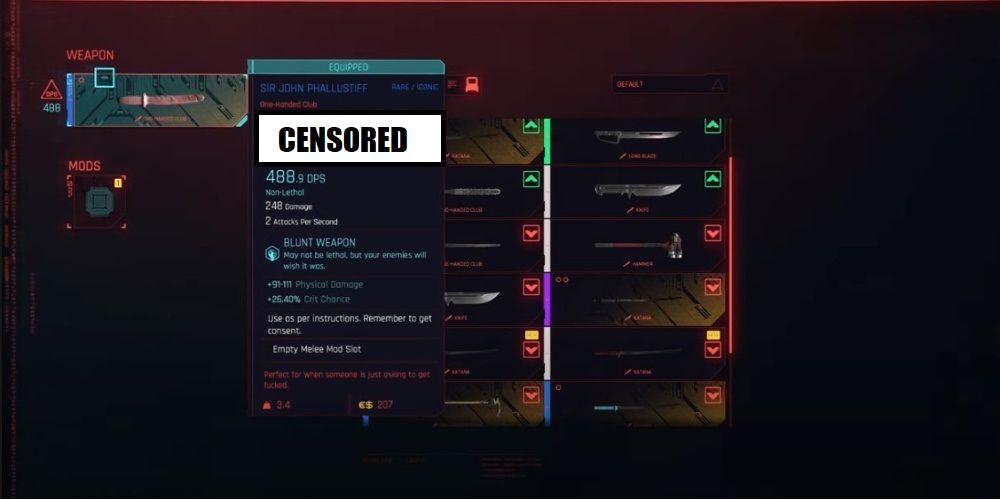 This is a weapon based on an adult toy and it’s good for a few laughs. If you use a controller, you can actually feel it vibrate as you use it. Swinging it around sounds like a lightsaber and there is an admittedly satisfying feeling that comes from clubbing your enemies upside the head with something so crass.

The iconic effect of this weapon is actually a penalty, removing the electrical and shock effects. So you are literally better off using an equivalent electric baton than using this weapon. The humor is not lost on anyone, but the price of the weapon is way too much to justify its use in combat. 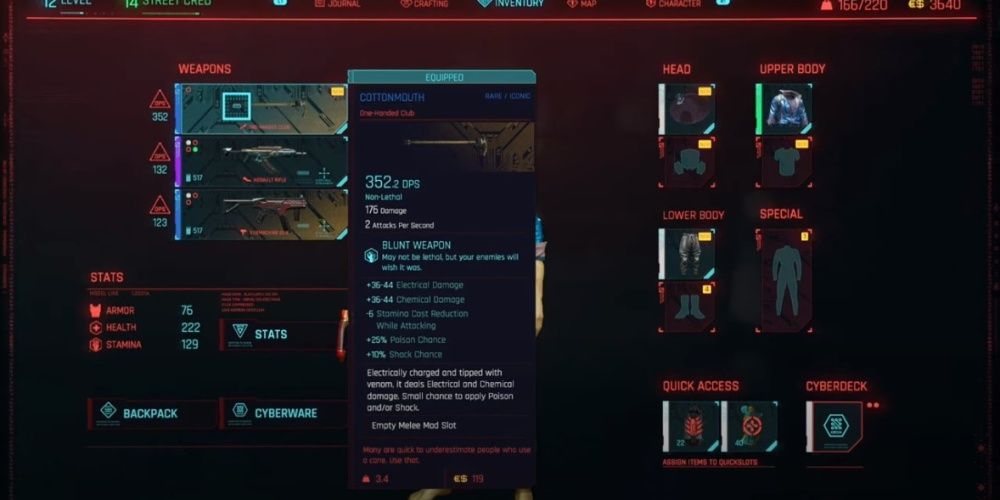 The Cottonmouth is the weapon for you if you build around doing status effect damage. The poison and the shock each have a small chance to go off every swing, so when you’re fighting an enemy, there’s a good chance that one or the other is going to go off, giving you an edge against both robotic and organic targets.

The DPS is decent as well, but the biggest problem with the Cottonmouth is that it only allows you to do two swings per second. To get the odds in your favor on the status effects, you really need to be swinging faster than that, but if you build around it and heal yourself often, there is potentially a place in your inventory for this. 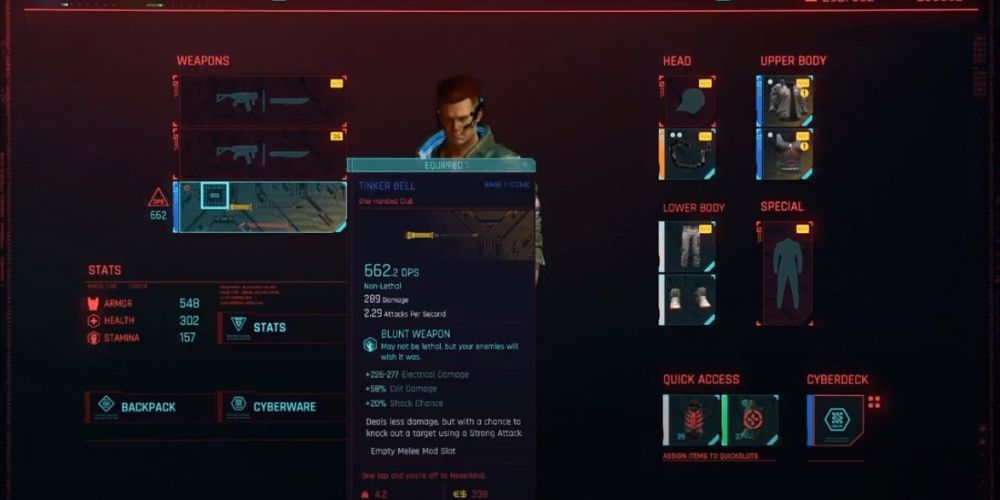 The reduced base damage on this weapon is not appreciated, but with the chance to knock out an opponent with a strong attack, it’s particularly hard to resist, especially against cyberpsychos and bosses that have a ton of health. Knocking them out gives you free hits and that beats out any amount of DPS any day.

The shock effect stacks with the stun, so enemies that go up against this will have a very difficult time moving or getting a shot off, which is ideal for you when you’re already exposed by being in melee range, so the lockdown effects are nice and compensate for the reduction in raw damage. 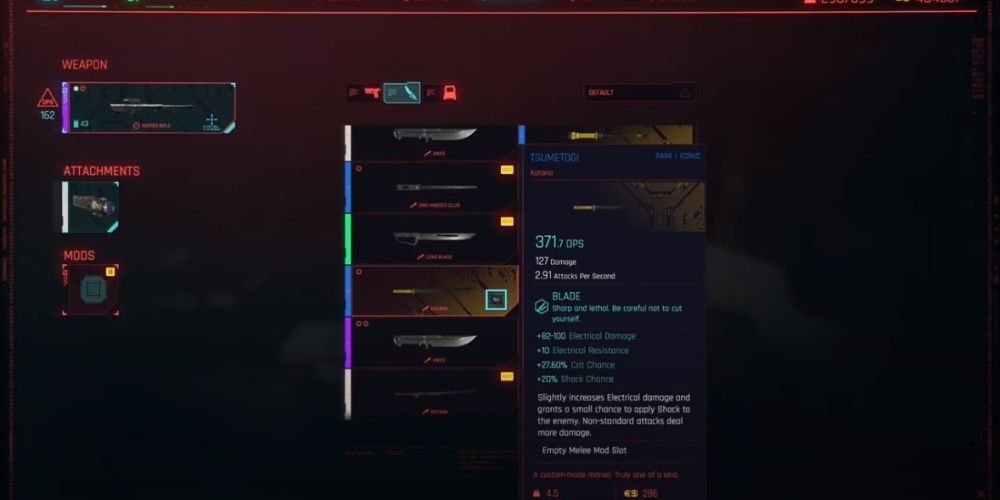 If you aren’t keen to use active abilities, then the Tsumetogi is the best katana in the game. Its DPS is the highest for all swords available. With five swings per second, the small shock chance actually has a pretty good chance at going off with each combo of swings, so it’s good for locking a single enemy down.

If you do use active cybernetics, then two other swords do better damage, but that doesn’t mean this is necessarily weaker. If you’re in a skirmish, you’ll probably be taking some electrical damage from a netrunner or a baton, so the resistance on this weapon will help mitigate some of that. 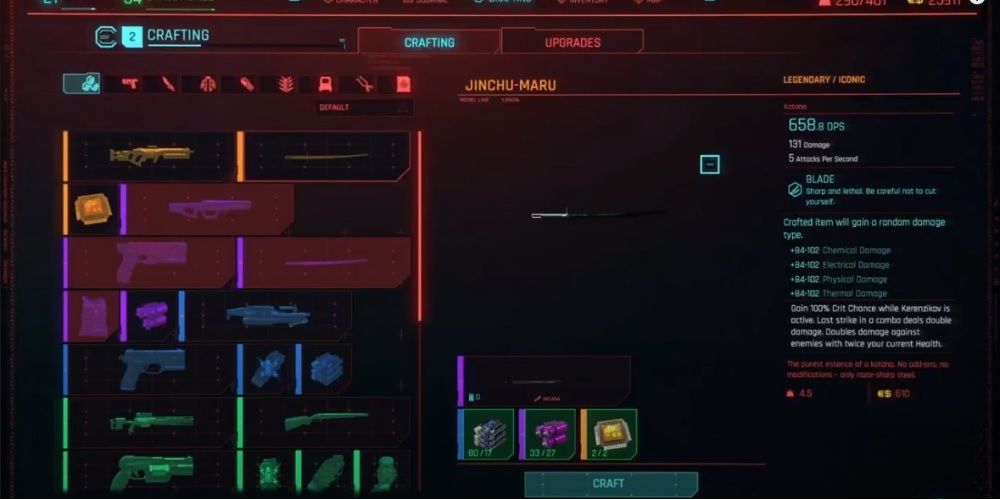 This weapon is a bit particular since most of the benefit is based on a specific cybernetic modification, but if you aren’t using this mod already, you really should think about it. Melee weapon users will definitely love slowing down time by 50% for 1.5 seconds every 5 seconds with the active ability on the Kerenzikov. 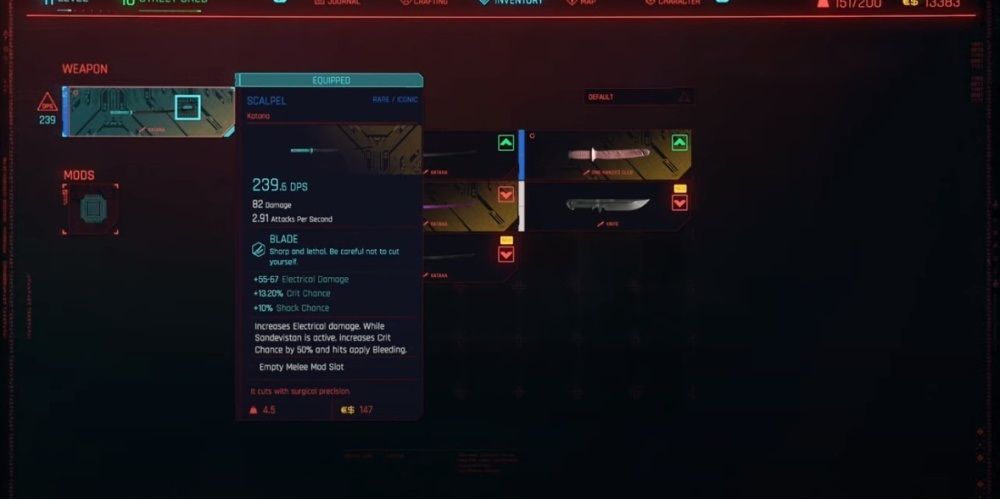 This is another sword that gives players a boost when they are using an operating system, but it’s got a bit more flexibility. When any Sandevistian operating system is active, it gains 50% increased crit chance and 100% of your hits will make the target bleed. If you have any other boosts to crit chance, this effect might bring it all the way to the top.

Additionally, the shock stuns and bleed effects will keep enemies drained and stunned. The bleed is effective against organics, the shock will destroy robots, and the DPS on this katana destroys everything in between. If you find an operating system with an active ability that lasts a long time, make sure to give this a shot. 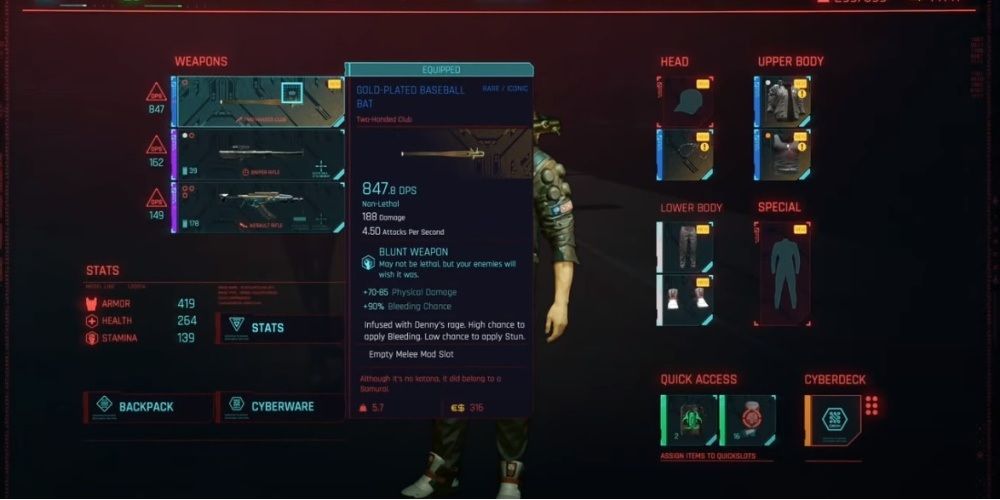 Don’t get too scared, even though the weapon is a club, it swings just as quickly as a katana, so you’ll be getting plenty of hits off. In terms of raw DPS, this is superior to any katana and it applies two effects that really set this apart from those that are lower on this list.

Coming in at five swings per second, the bleed chance on this weapon is higher than normal bleed effects, so you can be positive that after one second of engagement, any target you have will be bleeding. The stun effect isn’t as high, but again, because of the number of swings, the chance is pretty good to proc, especially against cyberpsychos and bosses. 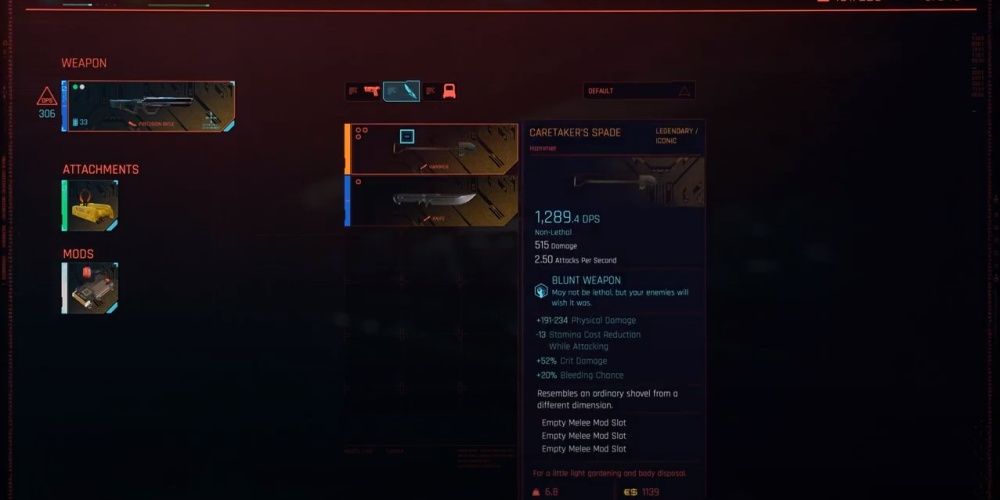 You’ll notice right away that this is the one weapon on the list not based on another common variety. There are no other shovels in the game, making this one of a kind. You might suspect that this is a reskinned club or bat, but the number of swings and statistics reveal that this item was designed in a class all on its own.

The extra mod slots enable you to put this damage through the roof, which is really just overkill because it’s already the highest DPS weapon in the game, just barely edging out the top spot on the list. It doesn’t have many frills, like electrical or bleed effects, but the name of the game is damage and that’s where this shines.

The gap between this weapon and the Gold-Plated Baseball Bat is huge; there is about 50% more DPS on this shovel than that bat. 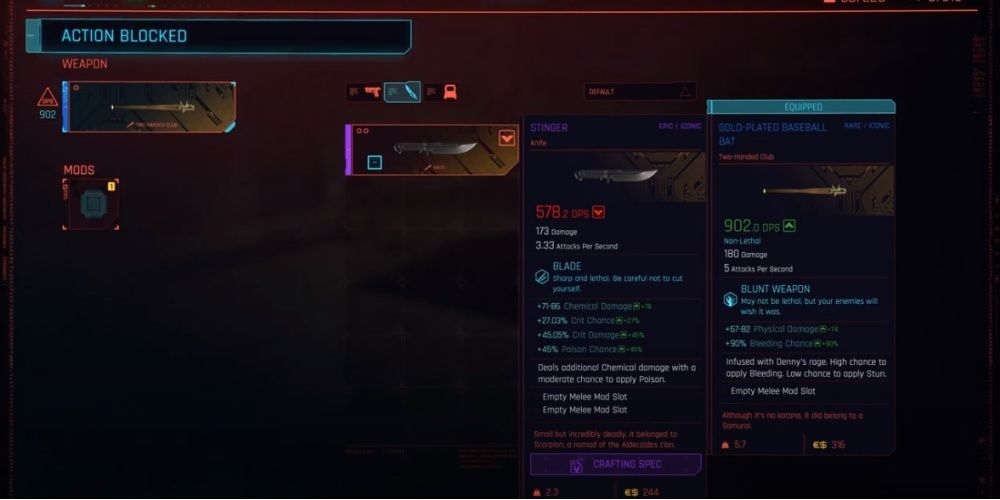 Don’t judge a book by its cover or a melee weapon by its sheath, this average-looking knife is the best in the game and it’s not all that close. It’s only a little bit behind the Caretaker’s Spade in terms of DPS, but it swings at a blistering 6.67 stabs per second, even faster than any katana.

This will end up being the most damage in the game as soon as you factor in the corresponding skills, many of which will only boost blades, giving this the leg up over the Caretaker’s Spade. Katana users that love those perks will find that all of them carry over to this knife since it’s registered as a blade, making this a flat-out upgrade in every category.

Don’t forget about the extra chemical damage and the poison effect. You’ll be doing even more damage than iconic sniper rifles and shotguns. People who are wary of entering a gunfight with a knife will change their tune quickly when targets start dropping like flies with a few blistering flicks of your wrist. 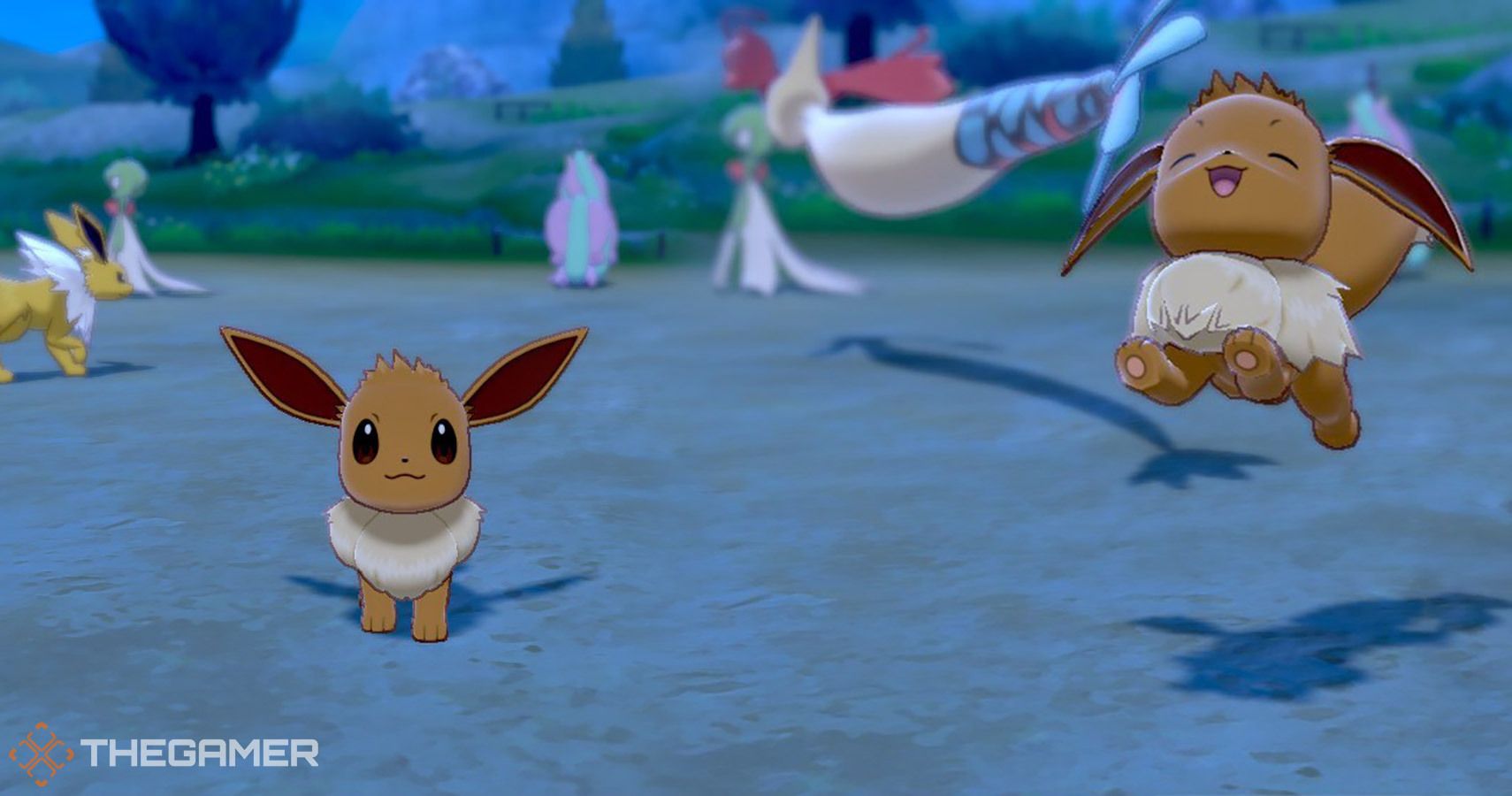