The Graverobber in Darkest Dungeon 2 is an extremely versatile character who can benefit just about any party. Fast, precise, and largely self-sufficient, she excels at clearing away obstacles and finishing off enemies at Death's Door. Best of all, she can easily gain Stealth to avoid retaliation and set herself up for her next turn.

Like all of Darkest Dungeon 2's heroes, the Graverobber has access to a large number of Skills but can only have five equipped at a time. We've put together our favorite combination for you to try. This guide assumes you've unlocked all of the Graverobber's Skills through repeated visits to the Shrine. But if you're just getting started or simply haven't dedicated the time to her just yet, you can probably get them all within a few runs. 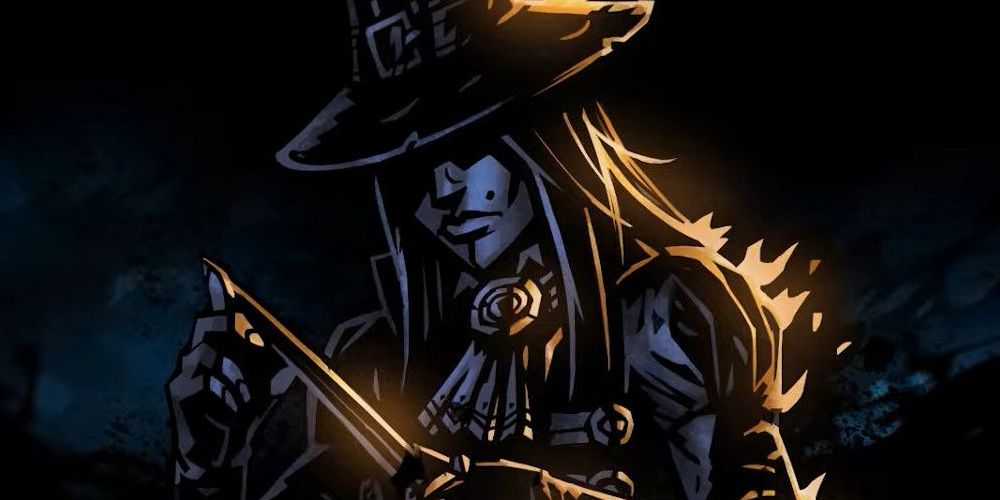 An ideal Graverobber capable of handling most situations will have the following skills:

This build is best utilized with the Graverobber starting in the third position (second from the rear). She'll move around quite a bit once she starts using Lunge, but should always end up back where she started.

The Graverobber should open most fights with at least one use of Poison Dart. Working in tandem with the Plague Doctor, you'll be able to apply Blight to most of the enemy team. Extra damage per turn is critical to winning any fight in Darkest Dungeon 2, so being able to apply Blight to almost anyone at almost any time is a massive benefit. If you're otherwise unsure of which move to use, Poison Dart is a great default.

Dead of Night needs an enemy corpse to target so you won't be able to use it right away, but you'll want to use it whenever it's available. The targeted corpse is cleared, making way for your frontline heroes to keep attacking. This also prevents enemies that eat corpses for buffs from doing so, making it especially critical during certain boss fights.

In addition to clearing out a corpse, Dead of Night also heals the Graverobber for a significant amount of HP. Unlike most heals in the game, it will restore the Graverobber's HP regardless of whether she's below a certain threshold. As long as the rest of the team can keep killing monsters, the Graverobber should be able to see to her own health and free up the Plague Doctor to keep everyone else alive.

Lastly, using Dead of Night gives the Graverobber Stealth. While she has Stealth, the Graverobber cannot be targeted directly by enemy attacks until she makes an attack herself. This keeps her safe from most threats, but the real importance of Stealth is that it enhances many of the Graverobber's skills while it's active.

Once most enemies are afflicted with Blight, the Graverobber can start getting her hands dirty. Lunge deals moderate damage to a single enemy and has an impressive 20 percent chance of landing a critical hit. Better yet, if the Graverobber uses Lunge while she has Stealth, the attack will ignore Dodge. Be aware that Lunge also moves the Graverobber forward two positions, potentially putting her in harm's way. She'll be able to easily retreat on her next turn, but having a tank ready to Taunt is a good idea on rounds where Lunge is used.

If you make it to the second Inn, you should consider using a Mastery Point to upgrade Lunge. The upgraded version deals more damage and also ignores Block when used from Stealth. This makes it a critical skill for fighting off the Cultist attack if the Flame goes out since the enemies in that fight make heavy use of both Dodge and Block.

Shadow Fade is how you'll pull the Graverobber back to safety after Lunging. This skill does no damage, but it moves the Graverobber back two positions (ideally from the front back to Position 3) and gives her Stealth. If you're in control of the fight, nothing is stopping you from repeatedly alternating Lunge and Shadow Fade, with occasional breaks to use Dead of Night or reapply Blight with Poison Dart.

Glint In The Dark

Glint In The Dark is the final skill the Graverobber unlocks at the Shrine. It doesn't deal as much damage as Lunge, but it doesn't need to. The primary advantage of Glint In The Dark is that it ignores Death Resistance up to twenty percent, significantly increasing the likelihood that it will finish off an enemy at Death's Door. This is crucial against bosses and other large enemies, whom you'll want to eliminate as efficiently as possible.

Glint In The Dark should be a priority when deciding which skills to upgrade with Mastery Points. It's even worth considering using your free point at the first Inn; when upgraded, Glint In The Dark ignores Death Resistance entirely when used from Stealth, guaranteeing that the Graverobber can kill any enemy at 0 HP. Both versions of the skill have the added benefit of ignoring Stealth, but enemies with that advantage are mercifully rare. 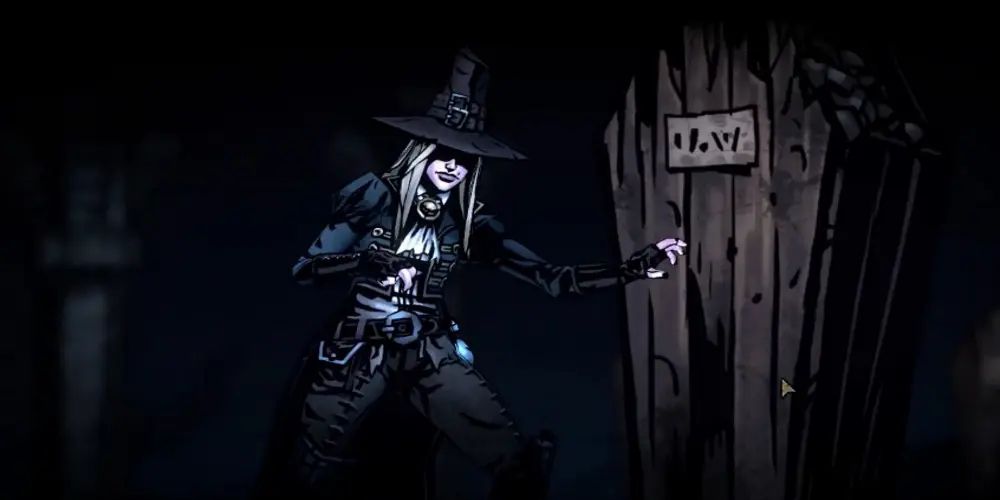 The highly-randomized nature of Darkest Dungeon 2 means you're never guaranteed to get the Quirks or Trinkets that are best for your build. Nevertheless, you should be on the lookout for boosts that will help the Graverobber do her job. The most crucial benefit for the Graverobber is an increased critical hit rate; Lunge already has one of the best crit rates in the game, and increasing it further can make the Graverobber a potent damage dealer. General damage boosts, especially to melee damage, are a good alternative if there aren't any crit boosts available.

Some rare Quirks and Trinkets give characters a random chance to gain Stealth at the beginning of their turn. This can potentially give you extra flexibility when using Lunge and Glint In The Dark.

If your Graverobber starts with or develops Necrophobia, visit a Field Hospital as soon as you can to remove it. Otherwise, she risks gaining unnecessary Stress whenever she uses Dead of Night. 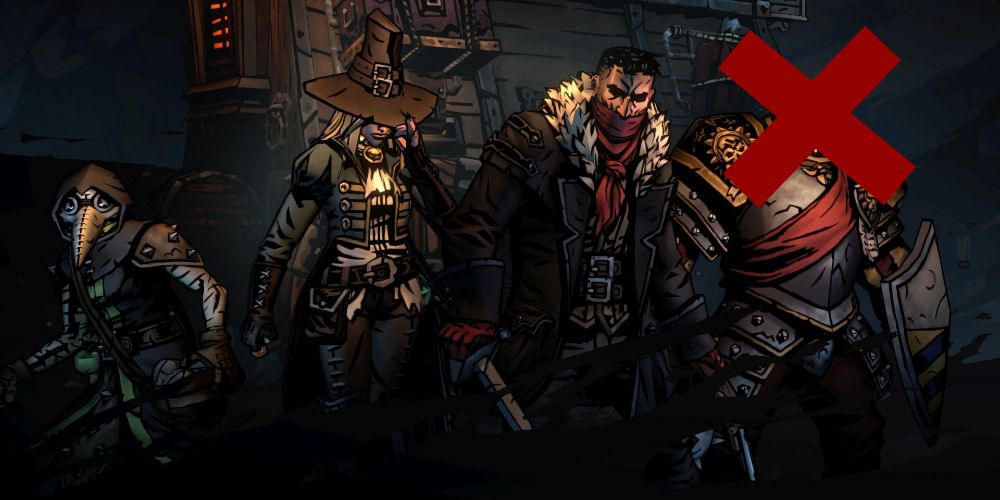 Bad things happen in Darkest Dungeon. If a party member dies, the Graverobber is versatile enough to temporarily slide into an alternate role. She shouldn't be out of her comfort zone for long, but all you need to do is survive until the next Inn, where hopefully a new recruit will be waiting for you.

If your tank is dead and you need to keep the rest of the party alive, some quick skill swaps can make the Graverobber a passable tank – albeit one that avoids damage rather than soaking it up:

Exchange Dead of Night for Absinthe and Poison Dart for Repartee. You'll need to use Shadow Fade to keep Stealth up unless you've been very lucky with Trinket drops. Once the Graverobber is in Stealth, use Repartee to gain two Taunts and three Dodges. This will draw most attacks to the Graverobber and mitigate much of the damage. When she needs healing, have the Graverobber take a sip of Absinthe, which will also give her a stack of Dodge.

She won't be able to keep this up forever, especially since she only has three bottles of Absinthe per battle – have the rest of your party finish off the enemy as quick as they can. Don't forget to use Glint In The Dark as soon as an enemy hits Death's Door. If you have to go this route, avoid combat as much as you can and rush for the Inn.