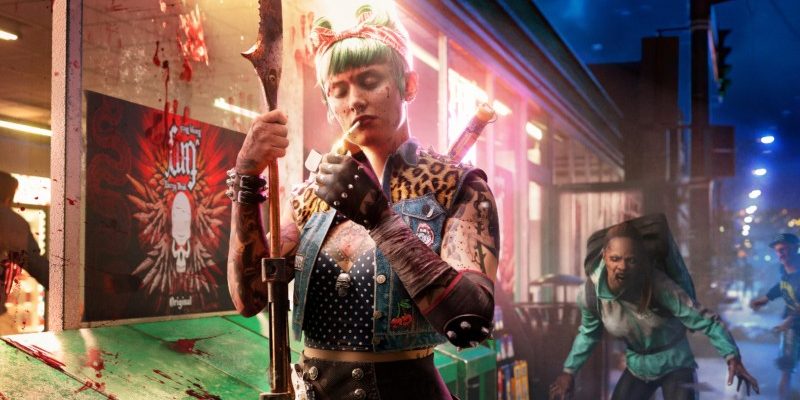 Dead Island 2 will feature six playable survivors right from the jump. You might already be familiar with one, and that’s Jacob, the Lenny Kravitz-esque character featured in the re-reveal trailer for Dead Island 2. During my cover story trip, I played roughly seven hours of Dead Island 2, but I didn’t go hands-on with Jacob. I did, however, play a few hours with both Dani and Ryan, two very different survivors that add their own flair to the story of this zomb-pocalypse.

I came out of this cover story trip convinced Dani is the survivor for me, but Ryan was great, too. And there are still the other four survivors I didn’t get to play. Nonetheless, I want to tell you about Dani, and Dambuster Studios does, too (read about Ryan here).

Dead Island 2 begins in the last days of a massive evacuation effort to get non-infected out of LA. It’s set roughly a decade after the events of the first Dead Island, and while logic points to Dead Island 2’s zombie outbreak virus being the same as the one from Banoi, that isn’t necessarily confirmed. The evacuation has been “surprisingly efficient,” Dead Island 2 narrative designer Khan tells me. The military has cordoned off the city, leading to the decision to quarantine what remains of LA so the infection can run its course. This is where the island aspect of the game’s namesake comes into play, according to the studio; nobody goes in, nobody goes out.

You meet each survivor on one of the last planes leaving LA. Unfortunately for them, though, it turns out that someone on board is infected. Protocol results in the military shooting this plane down – can’t have any infected leaving the city, after all – and it crash lands into Hell-A. At this point, I took control of my chosen survivor, Dani, and the game introduced me to its combat and primary antagonists: zombies! It doesn’t take long for Dani to be bit, though, and that’s where Dead Island 2’s narrative begins: you’re infected, but you’re not turning, and you need to get this information and your blood to someone who can help.

Now that we know how Dani’s story begins in Dead Island 2, let’s talk about why this character thrives in Hell-A.

Dani grew up in County Cork, Ireland, a beautiful place that doubles as a student town, according to Khan. There’s a lot of music and nighttime activity, as a result. She grows up with a “very traditional Stepford wife of a mother” and “equally beige” sisters. Her father is the kind of person who, when confronted with conflict or emotion, opts to ignore it and go fishing instead. Dani has always been the fish out of water in her family, with a bit of a chip on her shoulder. She doesn’t feel like she fits in and doesn’t have a particularly great relationship with her family.

Dani discovers the punk scene around town, and it shapes her childhood and teenage years. As soon as she can, Dani leaves County Cork. She hops the pond and ends up in Boston, which Khan says has a large Irish community. This works out great for Dani because if there’s an Irish pub, you’re “always guaranteed a job if you have an Irish accent,” according to Khan. Dani falls in love with the punk scene in Boston, but then the first Boston winter hits.

“[She says] F— that and traveled with an MIT student returning home in a road trip across the country to the warmest place she heard of – California – and knew, that’s where the nice weather is, and she wanted to just go to paradise. She feels like, ‘I escaped this very parochial, very conservative, very you-must-be-the-correct-way family and history’ and just never wanted to be that again. So that’s how she ended up in LA.”

Dani discovers roller derby in LA, and it becomes her new love. She’s still the punk girl from Ireland in many ways, but roller derby becomes her outlet for expressing herself. Khan says Dani has a hobby that’s more than aggression in roller derby, remarking on how Dani used mosh pits to release these feelings.

All the while, Dani is working jobs she doesn’t really care about, like retail and food service, and employers have let her go more times than she cares to admit because she likes to speak her mind “a little bit too freely” to customers. Khan says, “She wasn’t living to work; she was working to live.” She was living the life of a 20-something-year-old in California and loving it. When the zombie apocalypse hits, she’s not so fussed about going home to her family. Her loyalty resides with her team now, and she’s due for a roller derby match out of state.

“That’s the first thing,” Khan says, remarking on Dani’s priorities. “She has her chosen family, her chosen people, and she’s going to support them, hell or high water. And then it all gets a bit weird.”

You can morph your survivor in Dead Island 2 into the kind of character you want to play as in terms of skills, loadout, and more. Each survivor begins with two innate skills that speak to their nature and loosely guide you on a potential path for that character.

Khan says that because Dead Island 2 is a “gameplay first, combat first” game, the characters were sketched out as playable survivors before fully-realized characters. The narrative team got to “reverse-engineer” the survivor personalities as a result. For example, Dani specializes in heavy attacks. Why? That was a question Khan and the narrative team could answer through details that shed light on who Dani is as a person.

“The last thing I wanted was to make a caricature of an Irish woman,” Khan tells me. “I wanted somebody who is a modern California girl and… somebody who’s ended up as someone who charges into the fray and loves f—ing s— up in a as gratuitous and gleeful and joyful way as possible. She’s a laughing berserker. She’s not been rewarded for being good at work and now she’s really good at this. It’s not roller derby, which can be dismissed as a fad or a sport or a game, and it’s not enjoying music or surviving in a mosh pit. This is her being really excellent at what she does. So we ask, ‘why is she like that?’ And then we reverse engineer it.”

Do you think Dani is the survivor for you now that you know her backstory? Let us know in the comments below!