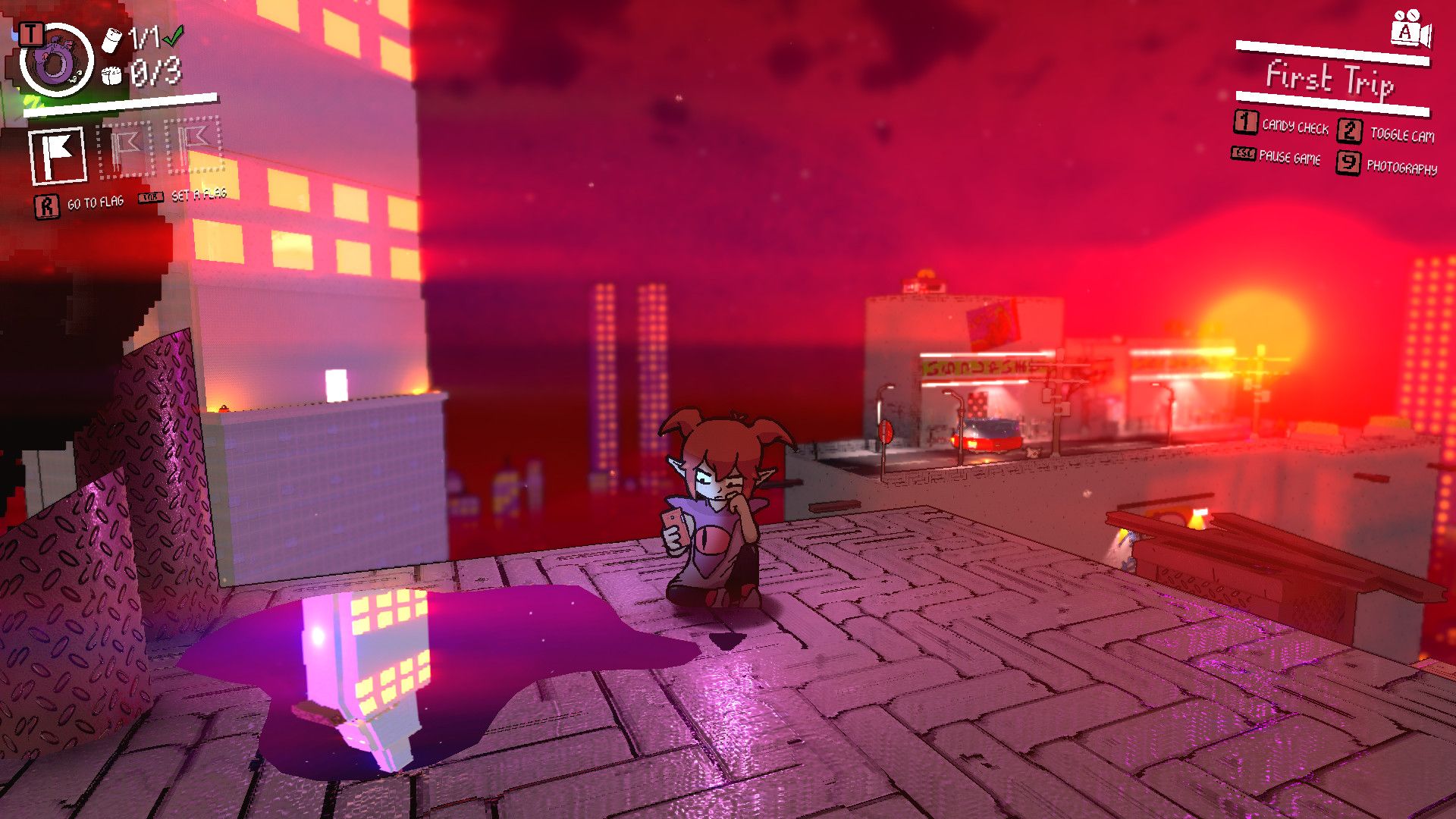 The makers of Slime-san pay homage to N64 era platform games with this impressively ambitious and imaginative collectathon.

Beyond Nintendo’s blockbuster adventures with Mario, 3D platformers are rarely a source of innovation. The successful remakes of Crash Bandicoot and Spyro suggest that many view changing the formula as unnecessary, with even PlayStation 5 showcase Ratchet & Clank: Rift Apart feeling like a glammed up PlayStation 2 game. When it comes to 3D platformers, nostalgia seems to rule over all other considerations when it comes to the genre and that’s not healthy.

Demon Turf doesn’t reinvent the wheel either, but a cluster of small differences go a long way to making it stand out. You play as Beebz, a 1,000-year-old demon girl who wants to unite all the turfs in Demon World under her own rule and dethrone the Demon King. Like everyone else in Demon Turf, she’s a 2D character in a 3D world. This means all her movements, from punches to wall-jumps, are drawn like a comic strip even though the rest of the game world is more realistic.

The striking style reflects the collaboration behind Demon Turf itself. Developer Fabraz, who created 2D platformer Slime-san, has teamed-up with the new indie publishing label of Playtonic, best known for Banjo-Kazooie spiritual successor Yooka-Laylee. As such, Fabraz’s first stab at a 3D platformer comes with surprisingly few growing pains, and even has the makings of a potential cult classic.

Demon Turf’s structure will be familiar to anyone who’s played Super Mario 64, since there’s a main hub with additional areas and levels hidden behind various portals. Each of the four main areas has a demon boss, which Beebz can face once she’s proven her worth by beating each level and obtaining a battery from it. There’s a clearly defined end goal from the outset, with the final boss locked behind a towering castle gate with a 50-battery entry requirement.

To reach this goal you’ll need to beat the majority of levels twice over. Once you conquer an area’s boss, alternative versions of each level unlock, featuring new paths and obstacles. These new routes tend to utilise powers Beebz unlocks after each boss, ranging from a hookshot to transforming into a spinning snake and the ability to quickly accelerate across falling platforms.

Even without these powers, Beebz movement is a versatile toolset. She has your regular double and triple jumps, along with a spin which grants an extra burst of momentum. There’s a super jump, equivalent to Mario’s long jump, to throw yourself forward and other trickier manoeuvres which require a combinational approach – like propelling yourself up a wall by bouncing off and performing a long jump back towards it to land topside. It can be surprisingly demanding and, unlike Mario, requires a better grasp on the complex spins and jumps to progress.

The platforming itself is responsive and smooth but there’s a lack of weight to Beebz’ movements which can feel unsatisfying compared to other platformers. It’s likely intentional to match the flat, floaty 2D character aesthetic, but it can feel like you’re sliding with little tangible feedback when you’re running around levels. It’s never too detracting, but it makes you wonder whether the unique visual style comes at the expense of more tactile movement.

This is noticeable at the start when you don’t have better tools for manoeuvrability at your disposal. In the opening world, themed around a drab desert canyon, Demon Turf makes a poor first impression, with standard platforming punctuated with basic combat encounters where you shove pigs into spikes (honest, it’s more mundane than it sounds). Once you’re past the first world however, Demon Turf opens up into something far more varied and colourful, throwing in bite-sized races, gliding, elaborate assault courses, hookshot mechanics, and other elements to flesh out the platforming.

Once it relinquishes the training wheels, Demon Turf finds its groove. Certain levels have you hopping between speeding trains in tightly orchestrated courses, while others echo Super Mario Sunshine and feel more expansive – tasking you with finding collectable keys hidden throughout tropical islands in the ocean. It’s all complimented by a consistently excellent soundtrack, which refreshes some of the conventional world types. The snow-themed world, for example, hits differently when it’s supported by chilled hip hop instead of penguin yelps.

This is bolstered by an inventive checkpoint system. Instead of being dictated by the developer, you’re given three flags at the start of each level which you choose where and when to place. There’s an exciting gamble in controlling your own safety net. Plant your checkpoint flags too early and later segments become a self-inflicted marathon of frustration. Choose not to place any and the satisfaction of clearing a level is immense. It’s an excellent system which offers a layer of strategy as you assess your own confidence in taking on the next string of platforms, while allowing some control over how punishing you want Demon Turf to be.

Demon Turf’s accessibility options might well be its secret weapon. Other collectibles you find within levels can be spent on mods which enable various enhancements, like granting an extra jump, an additional checkpoint flag, or improvements to your shove attack. It’s designed so you can only activate so many at once, but it offers just enough leniency where the challenge remains intact despite the additional boosts. If a level becomes too much you can even hire the computer to claim the battery so you can progress to the next area and try the level again later.

If frustration becomes an issue, there’s a surprising amount of distractions away from the core experience. Demon Soccer Golf sees you hookshot a ball around elaborate courses against a time limit. Photography Hunt lets you capture photos of obscurities or landmarks around levels, to be displayed in a museum in exchange for cosmetic currency. This is coupled with a combat arena and difficult platforming challenges which strip away extra abilities, ensuring there’s plenty to sink your teeth into beyond the 15-hour collectathon to the final boss.

With online leaderboards for each level, Demon Turf is also clearly aimed at cultivating a speedrunning community. There’s enough creativity in the various jumps and powers you unlock where it feels open enough to succeed, offering an arsenal which encourages experimentation and levels filled with potential shortcuts once you master the platforming.

Demon Turf might not possess the refined polish of Mario’s top tier adventures, but the affection and smart systems packed into this 3D platformer lift what could have been just another exercise in nostalgia. The stylish visuals, level variety, challenging boss battles, and well-considered design choices make Beebz an unexpected new contender among the platforming elite.

In Short: A 3D platformer which wears its inspirations on its sleeve but manages to offer enough individual style and unique platforming dynamics to stand on its own.

Cons: First set of levels do a poor job of selling the game’s best qualities. The character’s movement can feel too floaty. Combat segments don’t evolve much.