With a new season of Destiny 2 comes a new system of challenges, progression, and weapon collecting. The centerpiece of Season of the Dawn is undoubtedly the new 6 player match made activity the Sundial, which sends players on a time-jumping challenge to fight back against the Cabal. However, much like the chalice that fueled Season of Opulence’s Menageries, the Sundial activity is itself fueled by a completely separate object: the obelisks.

As usual, players are provided with an introductory quest that leads them through each new mechanic in the season. In typical Destiny 2 fashion however, players are also left to discover the intricacies and systems that govern the Sundial and obelisks with very little direction. We’ve put together this guide to help players understand the obelisks, what they do, how they work, and the most efficient way to make progress and earn weapons during the Season of Dawn.

Where Are The Obelisks

If you’re just starting the new season you’ll need to talk to Ikora first thing. She’ll inform you that there has been some unusual activity on Mercury and sends you there to find Osiris. Launch into the new area on Mercury, the Sundial Spire, to find him. 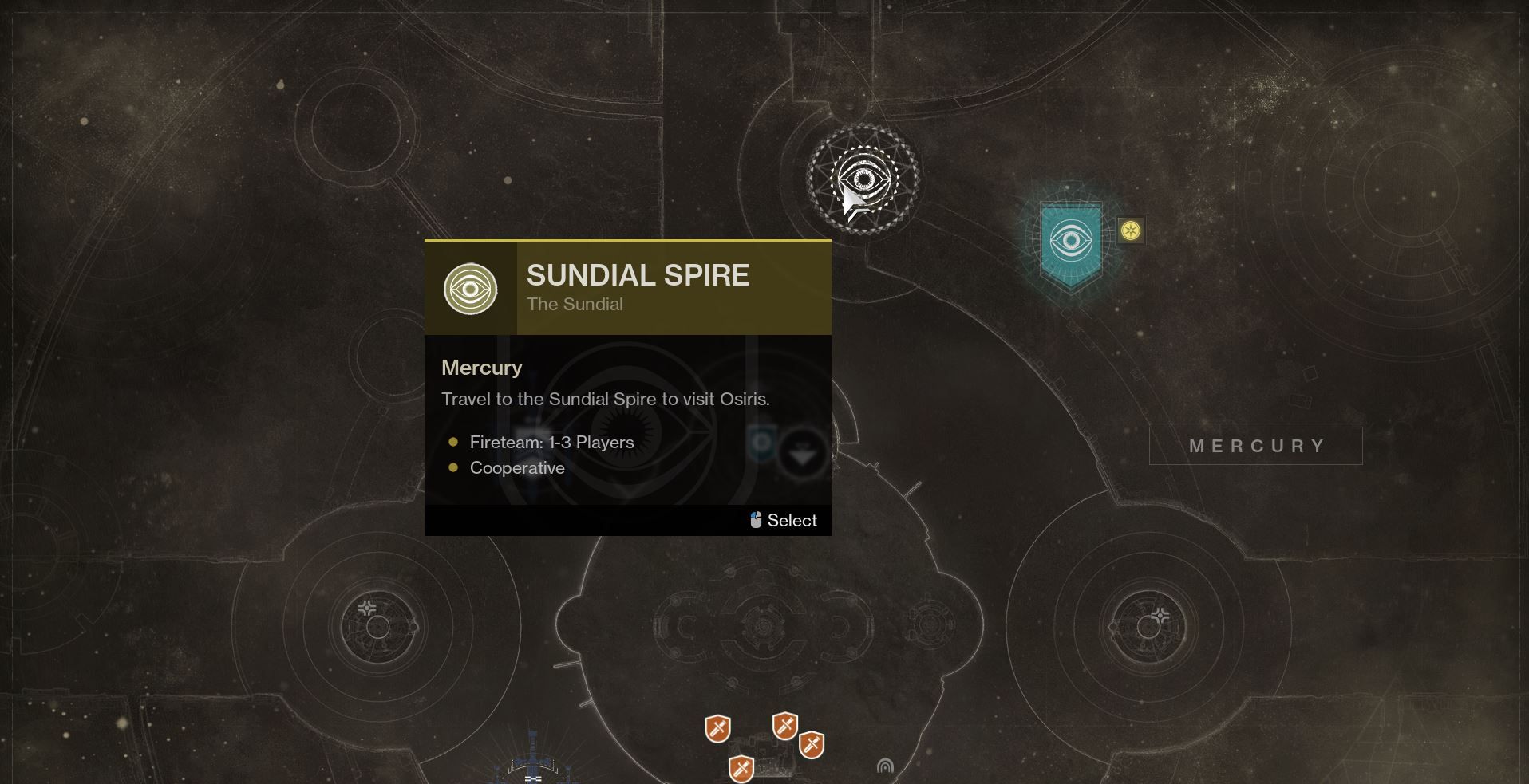 Osiris explains that the Cabal have been using his Sundial, a powerful tool created to manipulate time, in order to rewrite history and defeat the Vanguard in the Red War. The first order of business is to head to the Tangled Shore and activate an obelisk in order to stabilize time on the planet.

How To Use The Obelisks 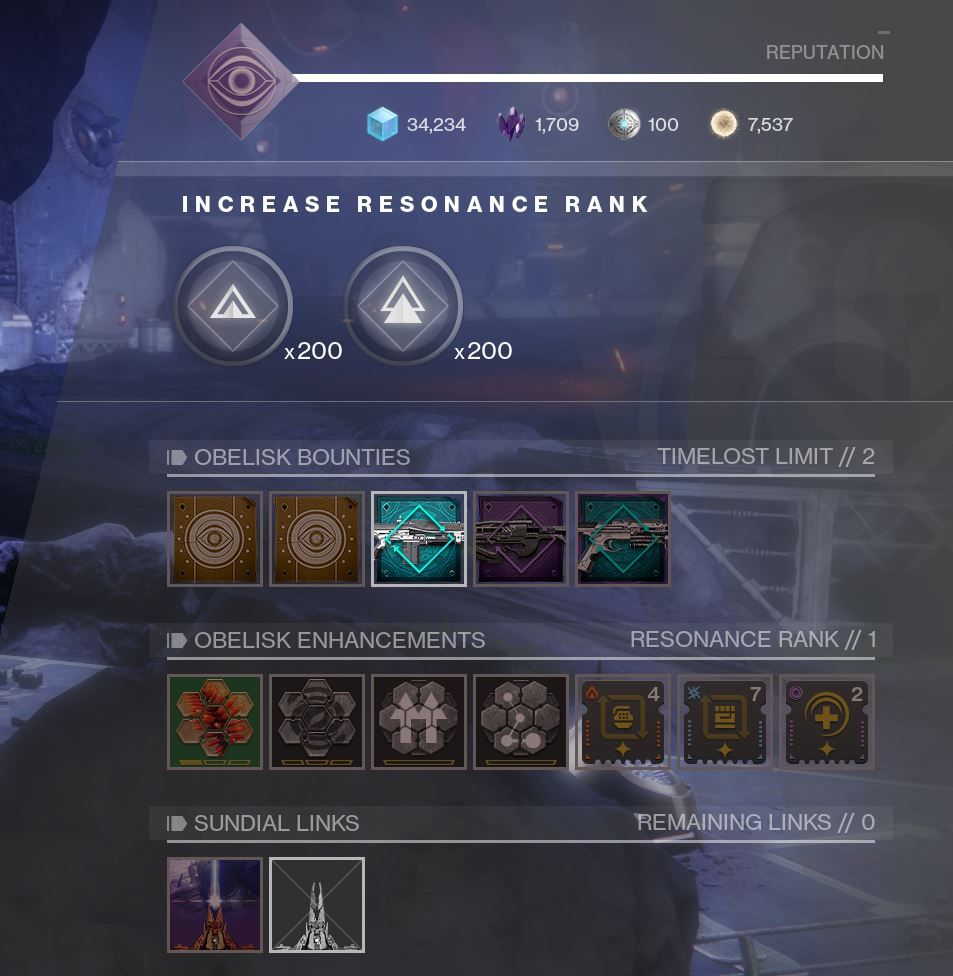 Here you’ll find 2 weekly bounties, repeatable weapon bounties, obelisk enhancements, and settings for you Sundial Links. We’ll go into each of these, as well as Resonance Rank, in detail.

What Are Obelisk Resonance Ranks

Resonance Ranks are the core progression for Season of Dawn. Each of the 4 obelisks have their own individual Resonance Rank which can be increased using the new seasonal currency called Polarized Fractiline. You rank up each obelisk by turning in Fractiline on this vendor page. It costs 200 Fractiline to increase an obelisk by 1 rank. There are 10 ranks for each obelisk.

By increasing the Resonance Rank of an obelisk you unlock additional weapon bounties, enhancements, access to mods, triumphs for the Savior title, and rewards additional rewards in the Sundial. Initially, you can earn Fractiline by completing obelisk bounties, completing season triumphs, and by playing the Sundial.

What Are The Obelisk Bounties

There are 2 weekly bounties for each obelisk that award 100 Fractiline a piece. These bounties cost 1000 glimmer and are moderately lengthy, requiring players to do things like get 90 grenade launcher kills or 45 precision sniper kills on 20 Fallen captains.  These bounties are the main source of Fractiline currently, so if you intend to upgrade all of your obelisks to earn the title and buy all the mods, it’s important that you complete all of the available bounties each week. 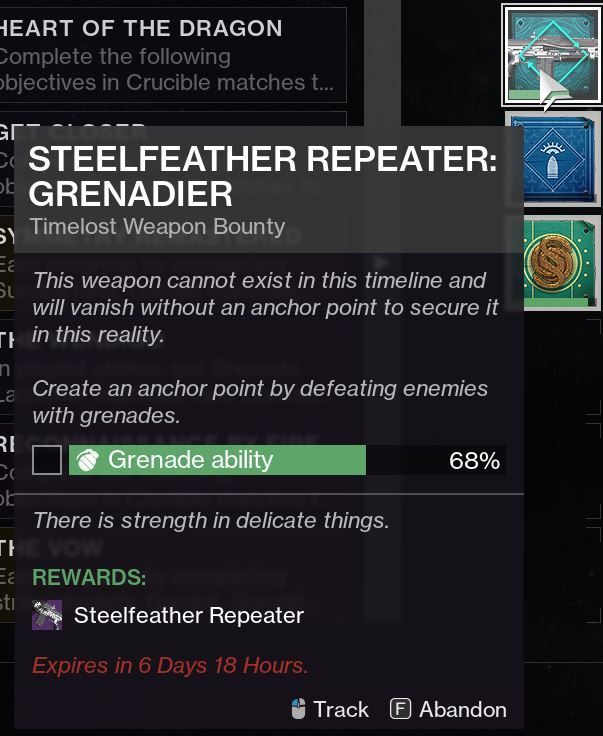 These bounties can require any number of tasks, including kills with a specific weapon or ability, or 5 public events/5 lost sectors. Once they’re complete, you can turn in the bounty from your inventory for the specified weapon with a random roll.

What Are Obelisk Enhacements

Just like obelisk bounties, the available obelisk enhancements increase as you invest in the Resonance Rank of each obelisk. The first type of enhancement increases the rate and sources of planetary materials, Fractaline, completion rate of Timelost weapon bounties, and the number of available Sundial links. 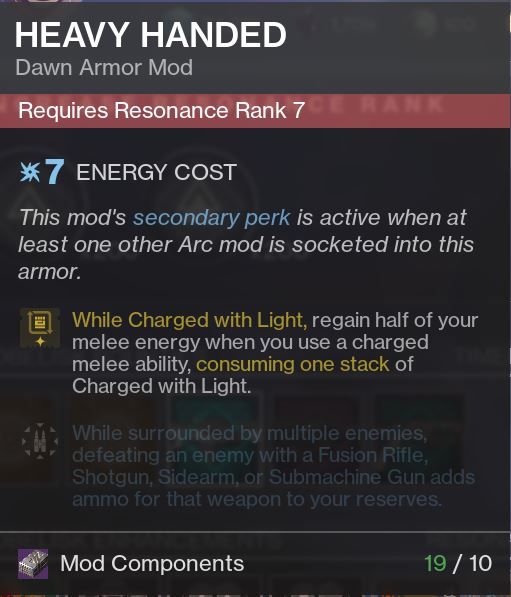 The other category of enhancements are the Dawn Armor Mods. The obelisks are your primary source of the new armor mods that dictate how your character builds and expends charges of light and is the core of this season character customization experience.

What Are Sundial Links

Sundial Links represent the way obelisks feedback into the Sundial. From level 1-11, you’ll only be able to link one specific obelisk to the Sundial. Whichever obelisks you have linked determines which rewards you’ll be able to chose from when you finish a run through the Sundial.

Initially, you’ll be linked to the Tangled Shore obelisk. When you complete a Sundial run, you’ll be able to chose from either the Steelfeather Repeater auto-rifle or the Breachlight sidearm. As you increase the Resonance Rank of the Tangled Shore obelisk you’ll have more choice at the end of each Sundial run. If you reset you links and instead link to the Mars obelisk, you’ll be offered completely different weapons when you finish the Sundial. The weapons you have access to Timelost bounties for determine the weapons you’ll be rewarded with when you complete the Sundial.

Once you reach Resonance Rank 11 and purchase the Signal Strength enhancement, you’ll be able to connect multiple obelisks to the Sundial and earn additional rewards.

How To Rank Obelisks The Fastest

The only thing you need to rank up your obelisks and earn more rewards are Fractiline. Initially you’ll earn the bulk of your Fractiline by completing the weekly obelisk bounties. Once you get each Obelisk to rank 2 however, you’ll have a chance to earn Fractiline from additional sources like Gambit and Crucible. Make sure you purchase these enhancements as soon as you can to increase your rate of Fractiline.

Getting your obelisks to max level is your overarching goal for the season. Focus on completing those bounties each week and you should have no problem maximizing your return.